One exclamation point was not enough to underline the bold graffiti letters on the side of the massive, windowpane-less Haus der Statistik, proclaiming “Stop Wars On Migration!!”. Empty for a decade, the former GDR building covering 40,000 square-meters, was sentenced to be torn down. A year ago, the property was officially re-purchased with the help of the Berlin Senate. On September 7th, the Werkstatt Haus der Statistik, formerly a bicycle shop next to the building, was opened to serve as a space for debate, to blueprint the future of the site. Visions of a new Berlin, both in space and citizenship, are at stake: the Haus der Statistik is prime real estate with utopian potential, right by Alexanderplatz. 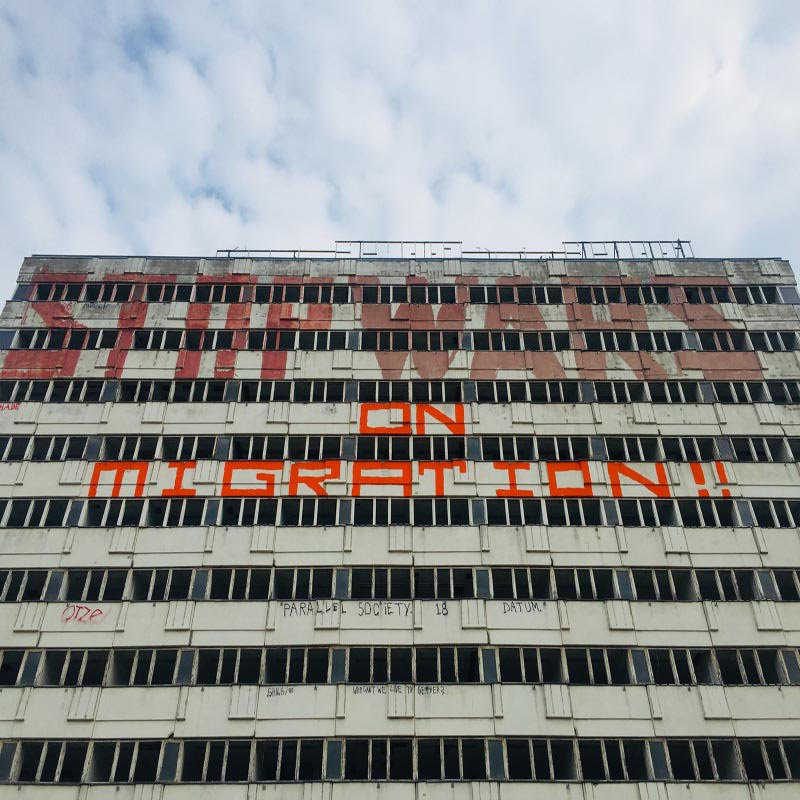 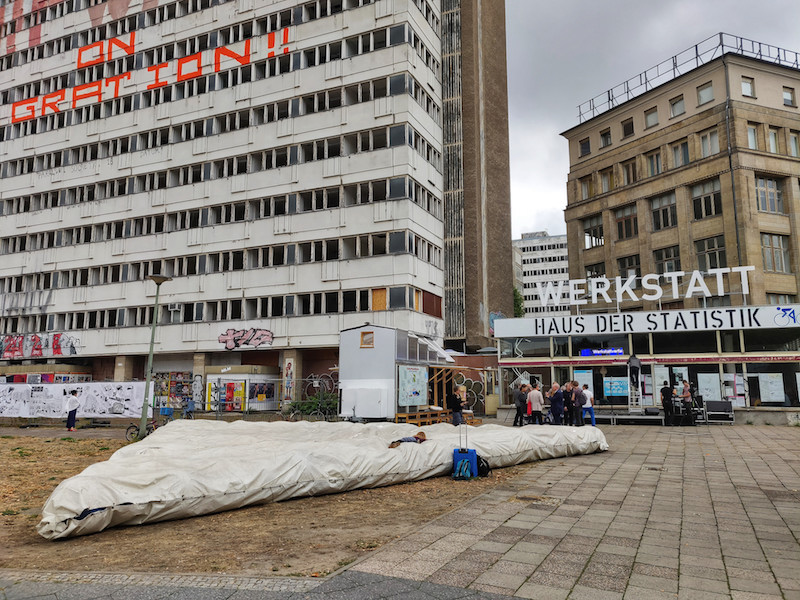 At the kick-off, the real estate cooperative of stakeholders, a five-headed hydra of unlikely partners; representatives from ZKB ZUsammenKUNFT Berlin—a cooperative for urban and creative development, including cultural actors Zentrum für Kunst und Urbanistik (ZK/U) and raumlaborberlin, among others; the Mitte district municipal councillor; the manager of the BIM (Berliner Immobilienmanagement Gmbh) and the manager of the WBM (Wohnungsbaugesellschaft Berlin-Mitte mbH); and the Berliner Senate for urban planning and living met to sign a 2.0 promise for a productive working partnership. Senator Katrin Lompscher expressed impatience about the tempo of the negotiations, whilst the municipal councillor wished to recognize the speed of the process, all things considered. 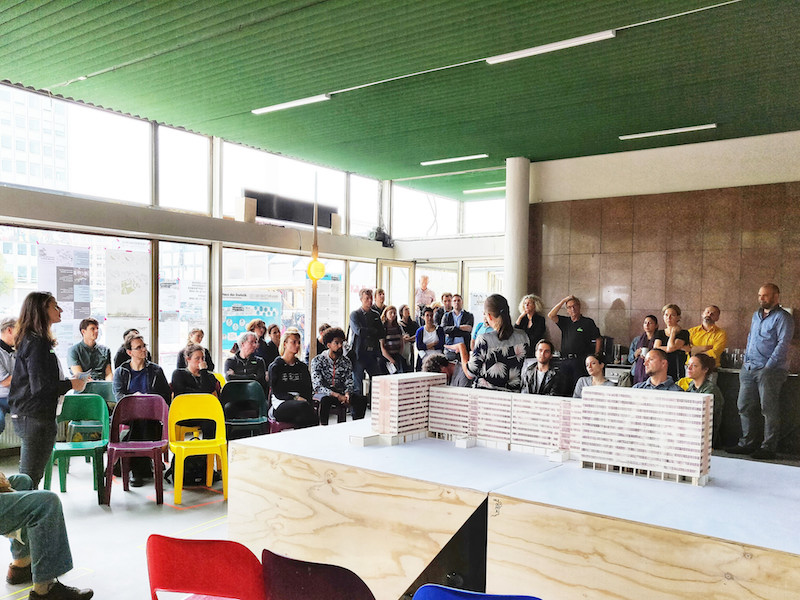 At this point, the Haus der Statistik is still filled with raw potential: a dream of a creative, social and political switchboard. In the next 4 months, the plan and call-to-action are to interactively workshop, through citizen participation and informal talks over coffee, the designs of how this space will be used: who will live in it? Who will work in it? Who will require how much space? The Berliner real estate agency promises affordable living, roughly 300 apartments are speculated. Alternative live-work forms like atelier apartments are envisioned; humanitarian endeavours to create shelter for the homeless during the winter are also taken into account; not to mention the new Mitte mayor’s office and possible apartments for mayor’s staff. 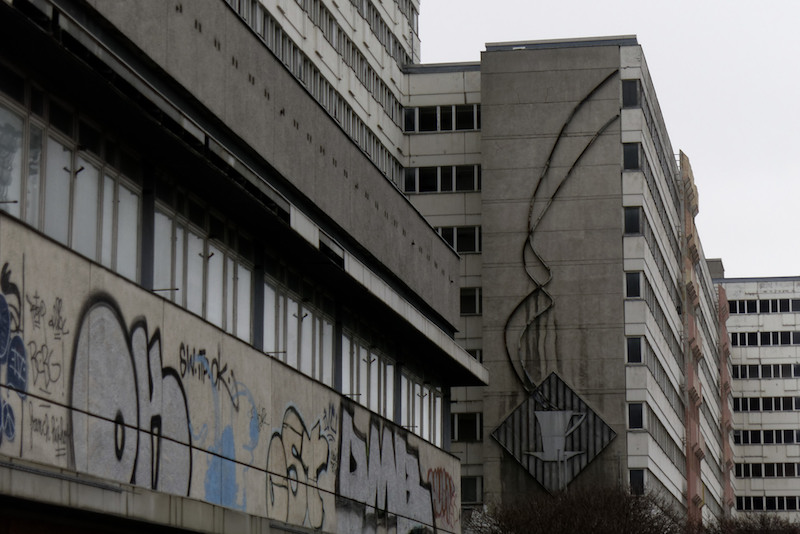 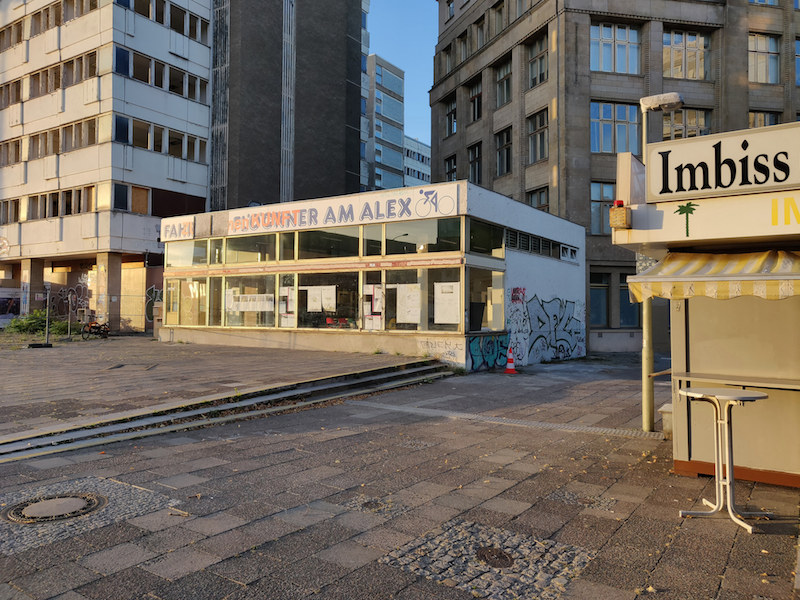 On view in the Werkstatt is a collection of inspirational reference projects and spaces from all over the world. The Werkstatt is a modular space with a model citizen character. Christian Schöningh, representing ZUsammenKUNFT, underlines the premise of the project: “We do not want to create an oasis of gentrification in the middle of the city.” Next to the Haus der Statistik, in front of the Oase Döner Imbiss, regulars take a swig from their afternoon beer and placidly watch the urban planners, real estate developers, artists, scientists and politicians workshop the future of the space. To become active in the future of this iconic space, you can add your voice to the debate by applying to become a jury member for the planning method for this co-produced city project, at the Haus der Statistik before September 25th.