A timeline of volatile labour migration legislation, enacted in Germany since the 1960s, encircles the research-based installation at Archive Kabinett’s current exhibition, ‘Bitter Things: Narratives and Memories of Transnational Families.’ These regulations—perpetually initiated and revoked by the German government—have had grave and ongoing consequences for so-called guest workers in what has come to be known as the “global care chain” (GCC). 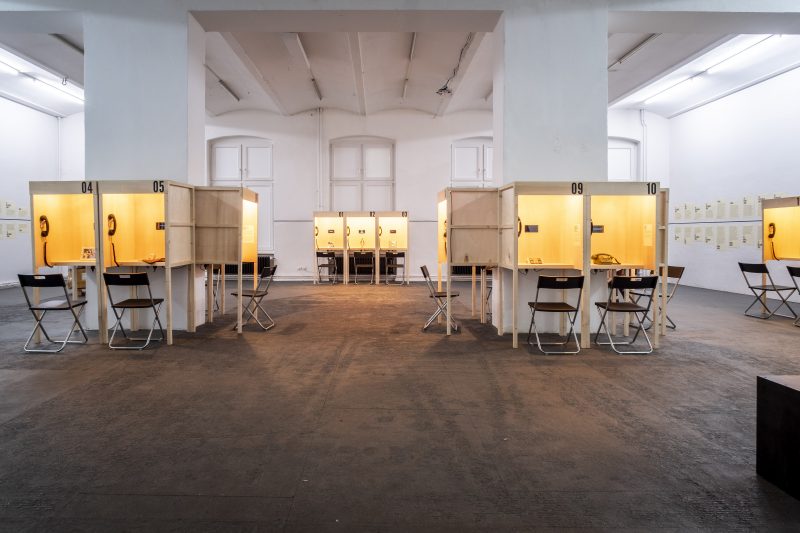 The term was first used by Arlie Hochschild to describe the transfer of care labour from poor to rich nations, primarily through the engagement of women. While conceptually useful, the model relies on the supposition that care deficits move down the chain, according to a linear pattern. Such an approach ignores the “overlapping, shifting, contingent and non-linear networks of emotion that arise during migrations”, according to sociologist Rachel H. Brown, and the children who are separated from their parents.

Malve Lippmann and Can Sungu are the founders and artistic directors of bi’bak, a non-profit association for contemporary art and community-based projects that runs an independent project space in Berlin-Wedding. In ‘Bitter Things,’ the two artists employ an affective lens to present a narrative enquiry, exploring how “the relationship between parents and children are redefined where gifts and material support take the place of shared experience.” The timeline charted along the walls of the exhibition space provides a useful chronology of the inconsistent legislations regulating Turkish, Filipino and Eastern European transnational families as they interact with the German labour market. The exhibition’s focus is, however, the significance of things and objects for those families, and the intersections of love, guilt and abandonment in these transnational constellations of care. 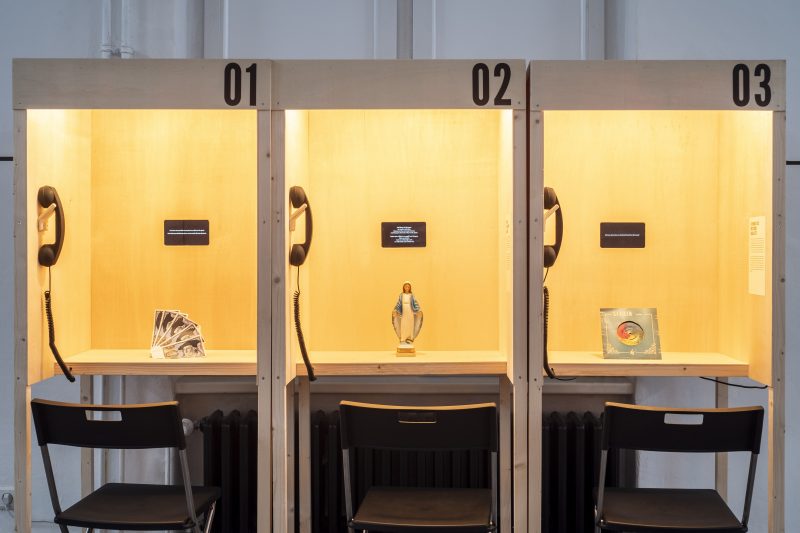 Sixteen carceral phone booths occupy the exhibition space at Archive Kabinett in Wedding. Each cubicle contains a black telephone receiver and an object; a doll for Lenuţa’s daughter in Romania, several phone chargers from Gülnar to her son in Turkmenistan. Through the phone, Gülnar explains that while her son only needs one charger, he will often ask for three or four: “He has a lot of wishes because I’m not there. I can’t say ‘no’ to his wishes. I just can’t say: ‘One charger is enough, my son’, for I’m living apart from him.”

The testaments of each of the migrant workers plays in chorus with the saccharine notes of video clips emitted from a television set in the corner of the space. Songs like Mother, Wipe My Tears Away (Romania, 2011), coalesce with the recollections of separated family members, articulating the particular guilt that attends these guest-worker mothers and the sense of abandonment felt by their children. In Faraway Mother a child sings of her “family keeper”: “Lost her freedom… bitter is that faraway land…. She ages in a foreign land, her little children still waiting for some news from her.” Songs like Balikbayan Box, (Philippines, 2013) and Germany, Give us Our Father Back (Turkey, 1970) reveal a far-reaching and long-running genre of music borne of the entanglement of guilt, abandonment and gift-giving, produced by the transnational economy of care. 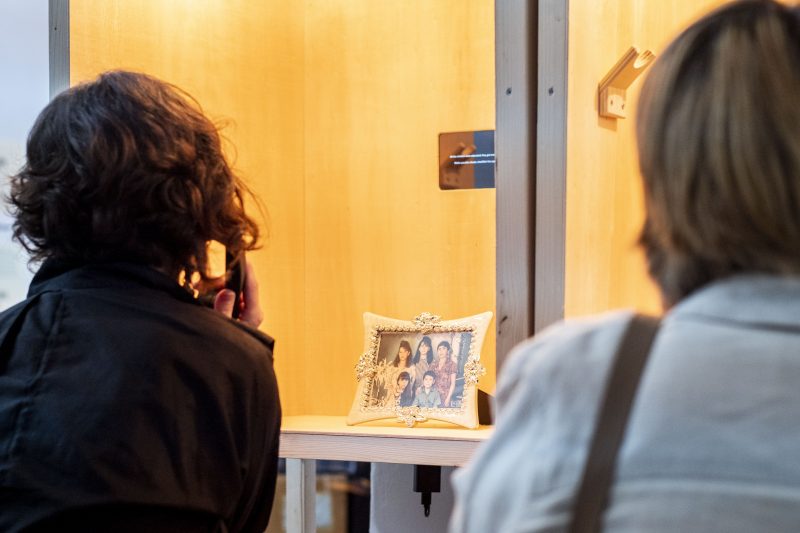 For Malve Lippmann and Can Sungu, their initial research into the history of so-called guest workers in Germany garnered unforeseen results: “through conversations with friends and acquaintances, we discovered that a great number of people in our immediate circle had been separated from their parents for some time during childhood. Initially, their parents had come to Germany without them to work.” Their multi-vocal installation brings the narratives of mothers and children together through the use of objects, gifts that hold deeply complex meaning for mother and child. The interdisciplinary nature of the installation illuminates the varied experiences of these families, often obscured by a methodological framework that is fixated on the relationship between user and provider. These narratives were actively suppressed in families for whom the absent guest-worker parent was taboo. 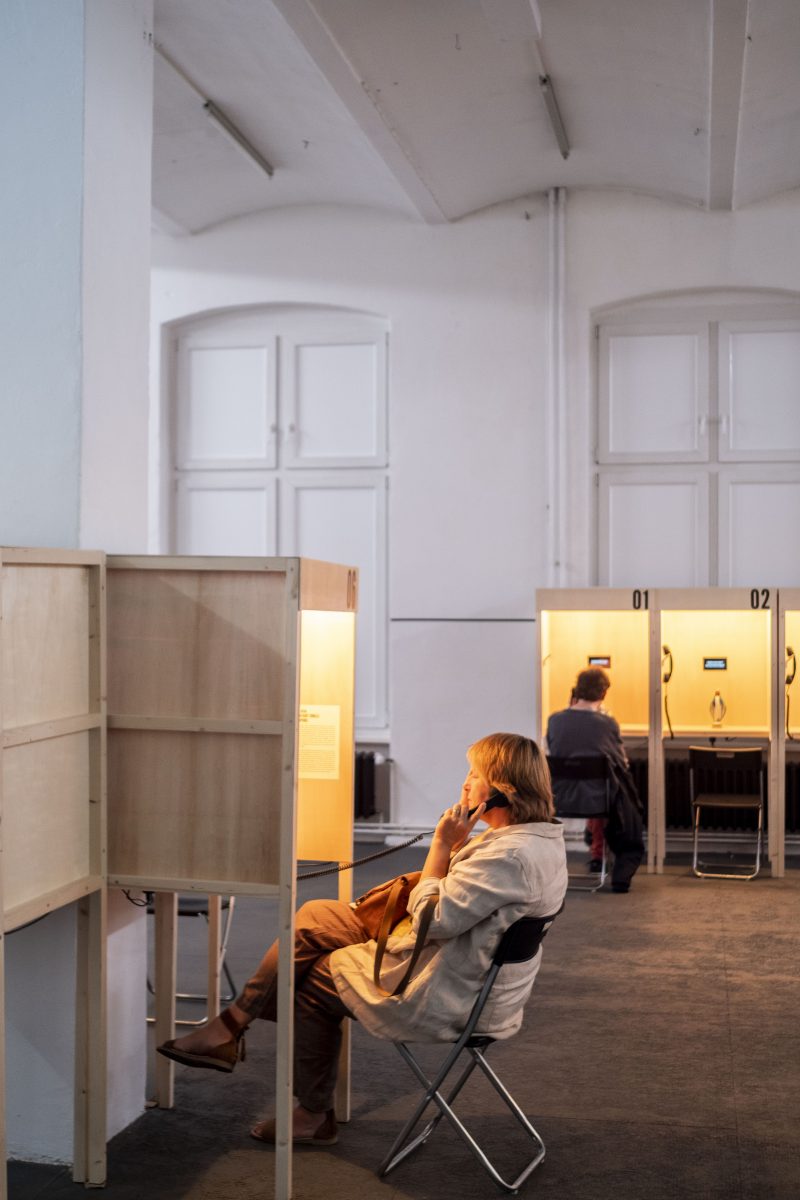 The exhibition project—accompanied by a program of film screenings, readings, public discussions, and a publication of diverse materials—thus provide crucial and almost universally marginalized perspectives on work-related separation of transnational families and the psychological effects these separations have on family members, communities and society as a whole.

The theorist Sara Ahmed argues that to “rearticulate the migrant care-worker as one ‘nodal point’ in an ‘affective economy’ is… to ‘unmake’ the gendered, racialized Third World migrant mother who moves along an a priori chain of care.” By employing an affective lens, Lippmann and Sungu historicize and politicize the labour of guest-worker mothers, and expose the “long-term scars that family separation can engender.”