During the Cold War, the East German republic designed and built prisons with walls weaponized against the prisoners within. Once perfected, the model for an “acoustics of incarceration” was exported to the Eastern Bloc, Colombia and Angola, Egypt, Lebanon and Syria. The sonic penitentiaries became known as the “Mercedes-Benz of prisons,” owing to their “German origins… and three-pronged star design.”

The artist Lawrence Abu Hamdan conducted an investigation into the ‘acoustic leakage’ at Saydana, a military prison in the North of Damascus. With limited visual memory of the architecture, inmates had to train their ears to learn “every crack and fissure” of the prison walls. Abu Hamdan discovered that inmates were “listening to every sonic sign and signal to try and gather as much information about the place in which they were incarcerated, the people who were incarcerating them, and the forms of torture they were being subjected to.” 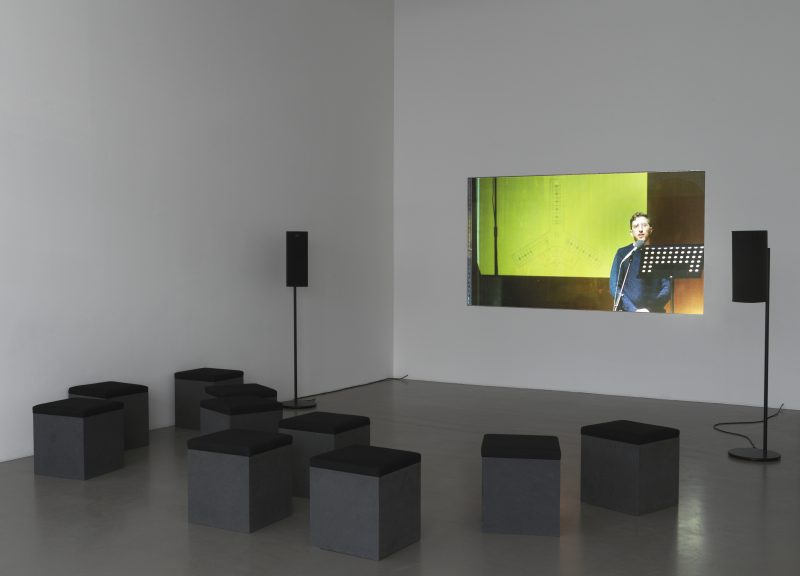 ‘Walled Unwalled’ is a 20-minute, single channel performance-video installation by Abu Hamdan, now showing at daadgalerie. The artist and forensic audio analyst developed, as he describes, “an interlinking series of narratives derived from legal cases that revolved around evidence that was heard or experienced through walls.” Abu Hamdan analyses these related case studies from inside a former recording studio in the Funkhaus Berlin. The screen of the video installation, inset from the exhibition wall, remakes the windows of the Cold War era sound studios, once dedicated to radiophonic propaganda.

In ‘Walled Unwalled’, analysis of legal cases are woven together with reenactments and personal testimonies, beginning with the story of Danny Lee Kylo, who grew “the best weed in Oregon.” One evening, without a warrant, Oregon police used an Ajima vision 2-10 thermal imager to detect the presence of heat lamps behind the walls of Kylo’s home, leading to his arrest. Abu Hamdan’s analysis centres around Kylo’s legal case, which attained “constitutional magnitude” and has “since been invoked to protect the information stored behind the screen of your phone and even behind membranes of your skin.” In his retelling of these events, the artist includes a testimony to the strength of Kylo’s weed, which in many ways articulates one of the central questions of ‘Walled Unwalled’ what does it mean when we live in a world where no wall is impermeable? 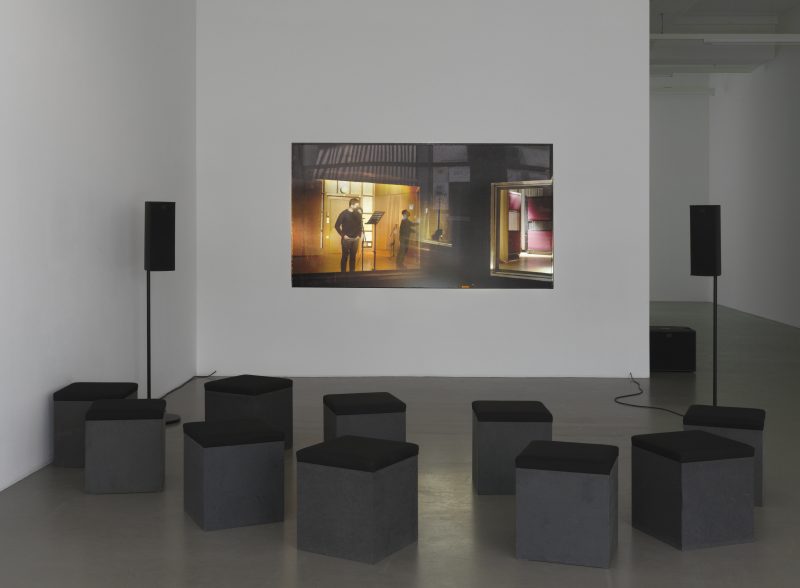 A parent is alleged to have found their son, having imbibed Kylo’s famously strong weed, cowering in the corner saying “I no longer know what there is behind the wall, I no longer know what a wall is. I no longer know that in my room there are walls, and that if there weren’t any walls, there would be no room.” The drug-addled meditations of an Oregon teenager are surprisingly rewarding when applied to Abu Hamdan’s linked narratives.

The artist analyses information from the trial of the Paralympic champion Oscar Pistorius, which sought to “discover if he had intended to kill Reeve Steenkamp through the bathroom wall or if it was an accident.” Abu Hamdan also recounts his acoustic investigation of Saydana, focusing on the sound of thick green plastic plumbing pipe striking a human body. He discovered that “the walls would shake, not from the force of the strike but from the blast’s resonance”, which could be felt and essentially broadcast “from the group cells on the 3rd floor to the solitaries in the basement.” 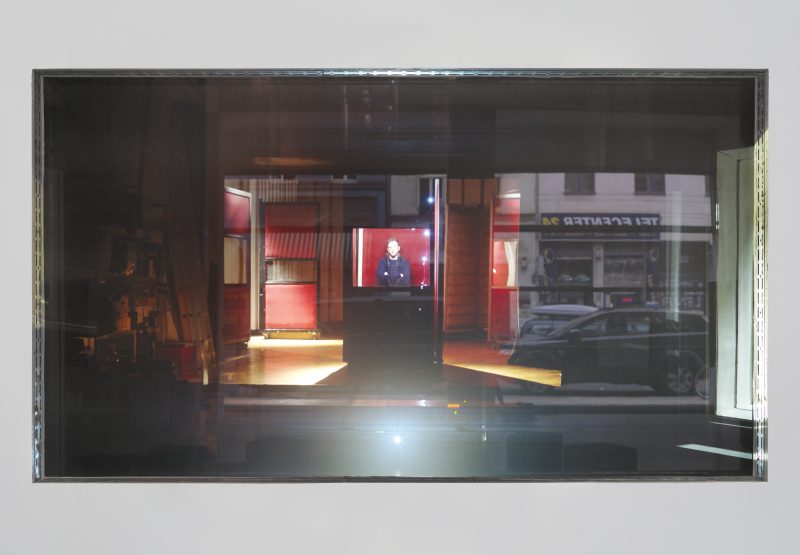 Each of the three narratives call into question the very meaning of a wall. What is the function of a wall when imaging technology can capture molecular information migrating through it? How much should we celebrate cases like that of Danny Lee Kylo when, as Abu Hamdan identifies, “police continue to buy technologies designed to make Iraqi and Afghani walls invisible, and Iraqi and Afghan bodies transparent.” As Germany celebrates the fall of the Berlin Wall as a symbol of reunification and future peace, there are physical barriers at sixty-three borders dividing nations across four continents. We are in a global wall-building frenzy, all the while developing technology to render the wall, as a barrier between the private and public, futile. Abu Hamdan rightly speculates: “we are all wall and no wall at all.”