When living in a production-oriented society that prioritises profit over quality of life, taking the time to care for our communities is a disruptive act. This disruption is the focus of the work of Feminist Health Care Research Group Berlin, a collective of artists and cultural workers dedicated to increasing our understanding of the value of care. Since 2015, the group have been producing research-based zines and exhibitions that interrogate methods of care, both historically and in the here and now. Their work explores techniques for dismantling the hierarchies inherent within the health care system; facilitating workshops, discussions and publications that discourage the idea that you have to be an expert to engage with topics of health. Viewing health and health care as a political site, FHCRG aim to return agency to those of us who are navigating these terrains, giving us the tools to prioritise care in the face of an uncaring economy. 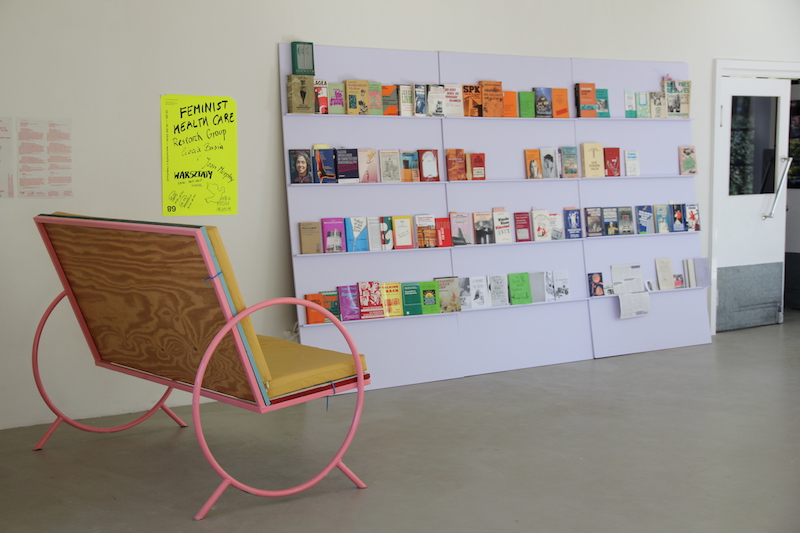 FHCRG: ‘Practices of radical health care – materials of the health movement of West Berlin during the 1970s and 1980s’, installation view at M.1 Hohenlockstedt // Courtesy of FHCRG, Inga Zimprich

Romily Alice Walden: Can you introduce BAL readers to what Feminist Health Care Research Group (FHCRG) does and say a little about the group’s origins?

Inga Zimprich: My background was in self-organized art practices and institutional critique. Prior to the group’s formation, I was working a lot with artists in workshop formats, as well as researching different social questions. At some point, I realised that as artists we don’t dare to make work on a topic as big as health and health care, but it’s a factor that is affecting all of us on so many levels. Health and health care are very contentious sites, where a lot of politics are enacted, and we are affected so personally by these politics when we are in a moment of acute illness or when people around us need care. In both situations we find ourselves in need and dependent, which in itself is a particular political moment to act from.

Despite this, I find that we are put off from exploring this topic because the field is so huge and intimidating, and society tells us that we need to be experts to participate. So, in 2015, I asked around 40 people in my network whether they would be interested in starting a research group on health care. I wanted the group to find its own methodology; it was important to me to make the research the outcome and to find ways of archiving the knowledge that we make collectively, as well as finding a way to share it. We started as a larger group and after two meetings the group split and three of us—Julia Bonn, Alice Münch and I—decided to continue as Feminist Health Care Research Group Berlin. Since then, we have produced six zines and held multiple workshops. We recently created an exhibition ‘Practices of radical health care – materials of the health movement of West-Berlin during the 1970s and 1980s’, which just closed at District Berlin and opened at M.1 in Hohenlockstedt. 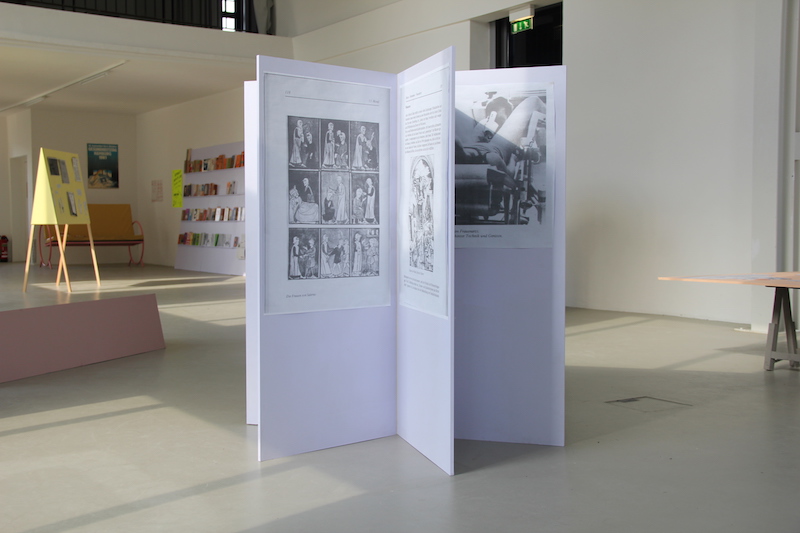 FHCRG: ‘Practices of radical health care – materials of the health movement of West Berlin during the 1970s and 1980s’, installation view at M.1 Hohenlockstedt // Courtesy of FHCRG, Inga Zimprich

Romily Alice Walden: Can you tell us about the working process for that exhibition?

Inga Zimprich: During our research for the exhibition we learned that in the 70s and 80s a large movement of people had started to politicize health care in West-Germany, and this became known as ‘the health care movement.’ These collectives were using various methods to disrupt the health care system: bringing politics into doctors’ practices and waiting rooms, learning and adopting alternative treatments, practicing self-examination, developing abortion practices, etc. We began to do archival research and meet some of the key protagonists from this period and, as a result, we gathered a lot of material from that time in the form of zines, publications and interviews. For some of them it has been a long time since they spoke about their role in the health care movement.

During the research process we discovered that this health care movement generation that has been working for reproductive rights and women rights for so long have so much to share, but we also realized that there is a need for actualization and dialogue with their knowledge and today’s queer and intersectional feminisms. There are challenges in facilitating this dialogue, but we would love to get this intergenerational exchange going. 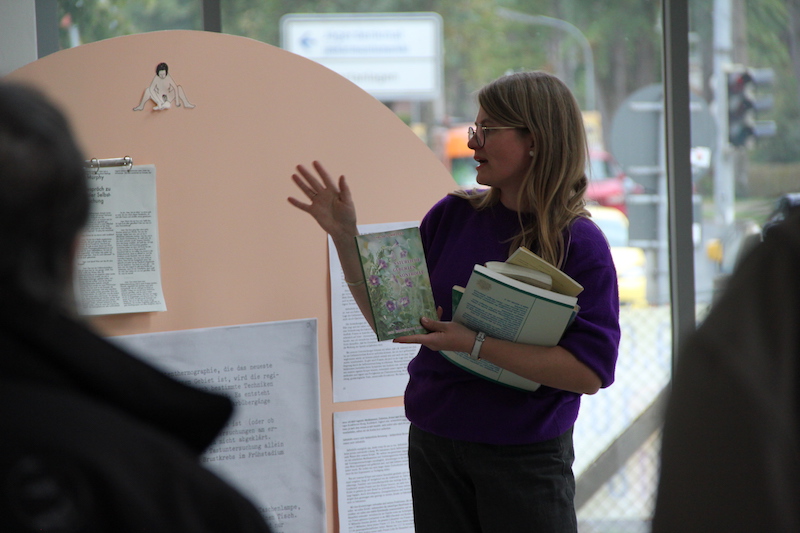 Inga Zimprich at ‘Practices of radical health care – materials of the health movement of West Berlin during the 1970s and 1980s’, at M.1 Hohenlockstedt // Courtesy of FHCRG, Sönke Hallmann

Romily Alice Walden: Your most recent zine Sick Time, Crip Time, Caring Time explores tactics for interrogating group dynamics, group care and interdependencies within our creative work. Was there a reflection on the way that you were working as a group from FHCRG’s outset?

Inga Zimprich: Yes, the three of us who became FHCRG quickly realized that we had very similar needs, which shaped the way that the group began to work. It was fundamental that we realized we could meet once a week for a number of hours, we could cook, we could bring the kids, and if one of us was really exhausted because she had hardly slept, she could lie down and rest. We understood that if we wanted to produce something together it would mean letting go of expectations of a certain standard of work. For example, if we produced a zine we wouldn’t be able to proof-read it and we knew that we would have to publish it as it came out with the capacities we had at that moment, because the care-time that we needed to look after our babies or small children was so huge and so overwhelming. These days the group is very much out of sync when it comes to capacities and time and commitment, which requires a whole new negotiation of how group work can be done.

Romily Alice Walden: As the group has developed how have you found balancing the care of the internal needs of the group with your external outputs?

Inga Zimprich: I think we haven’t managed so well. When we were working on our latest zine Sick Time, Crip Time, Caring Time, we conducted an interview with Taraneh Fazeli who is part of the group Canaries. Canaries describes itself as a network of art-adjacent cis women, trans, and non-binary people living and working with auto-immune conditions and other chronic illnesses. It was so interesting for us to talk to another person who is part of a support group, which had also been an art collective at some point, inquiring how they dealt with the challenges the art-field poses. I personally have the feeling that it is quite difficult, if not impossible, to remain within the art field and deal with the pressure it creates: you do a lot of unpaid work and a lot of short notice work and a lot of invisible work that is never accounted for. If your group has less capacities, for example due to childcare or sickness, I think it is really hard to tackle that. Initially, within FHCRG, we wanted to push back on those expectations so that the group gets the care it needs as a conscious protest against the demands of the art field. I believe this is where we failed, which is also why I am so interested in making this a public question. 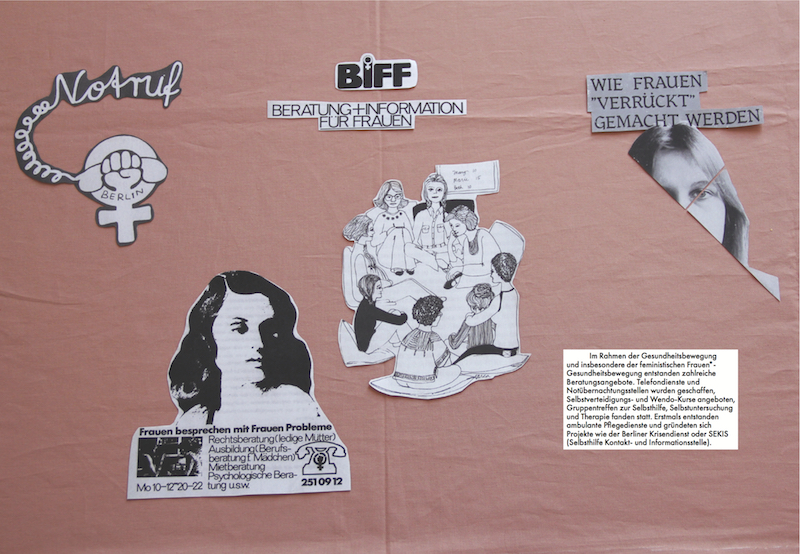 Romily Alice Walden: Has it been powerful to bring the topic of caring into a public sphere and open up that dialogue? What are your aims in starting this conversation?

Inga Zimprich: What FHCRG has been doing is creating space amongst cultural workers to exchange about fragility, needs and fears in relation to our bodies, our psyche and our health. It’s quite a taboo topic amongst cultural workers, to talk about exhaustion, fatigue, anxiety, being worried about old age, many of us not having proper health care, etc. For instance we contributed a zine to the exhibition ‘Lucky’ at nGbK recently, which issued guidelines in English on how to enter the Künstlersozialkasse (artists’ health insurance). I believe that in the art field we are silent about what concerns us because we are working in such a competitive field, where being open about worries, failures and rejections can lessen our competitive edge. I think it’s very important to make space to share experiences and develop strategies so that we can start to act in solidarity with each other.