‘Geographies of Imagination’ at Savvy Contemporary starts with a long underground corridor leading to the main exhibition space at silent green, the former crematorium that now houses the gallery in Berlin-Wedding. The exhibition title is reminiscent of the notions of “imagined geographies” and “imagined communities” coined, respectively, by Edward Said and Benedict Anderson, forty and thirty-five years ago. The walls of what is usually just a passage-way, a non-space on the way to the gallery, are marked for this exhibition with black ink: tracing a vast historical landscape of “imagined geographies”. These range from territorial claims, as in the treaty of Tordesillas of 1494, in which the Spanish and Portuguese divided the world into a Spanish and a Portuguese half, through to the founding of such alliances as the European and African Unions. The timeline ends above the entrance to the gallery with recent milestones involving Germany and the EU investing in African states to halt the flow of Europe-bound migrants. 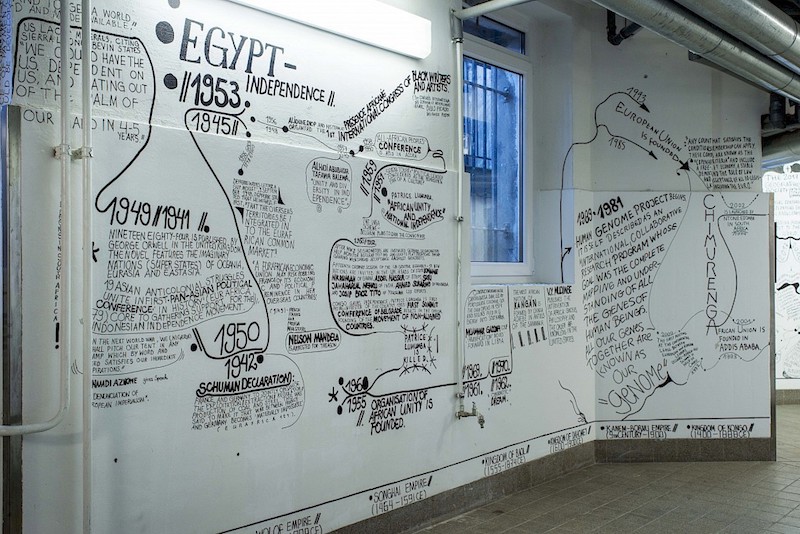 Accompanying the visitor’s mental and physical journey along the timeline is the sound of clapping hands, coming from the video Maps (2012) by Anna Binta Diallo. Through a montage of filmed images of maps and home-video footage, it charts the journey of the artist’s family from one former colony to another: from Senegal, West Africa, to Manitoba, a prairie province of Canada, across the Atlantic ocean, in what could be read as a retracing of the infamous Middle Passage. The fast rhythm of the hands clapping encapsulates the at once collective and private dimensions of the narrative of land demarcation and the relocation or people, voluntary or involuntary, that is presented. The sound is both reminiscent of children’s play, and drill-like, suggesting the relentless pace of history or the speed at which Western societies expect integration of migrants to happen. 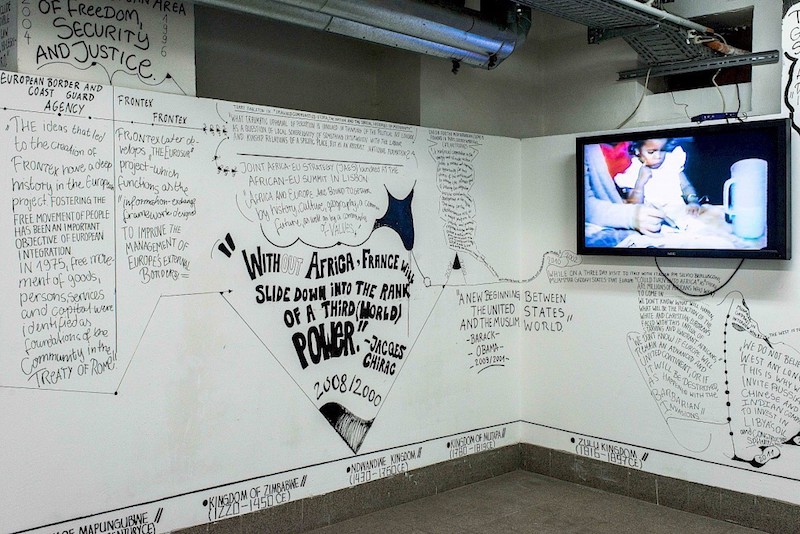 As the curators Antonia Alampi and Bonaventure Ndikung lay out in the exhibition handout, ‘Imagined Geographies’ is not another art exhibition pointing to the need for Western art institutions to expand their geographical scope to include artists from the Southern hemisphere. Instead, at a deeper level, the show draws attention to the very mechanisms of “othering” inherent to the projections of “imagined geographies”. These are not limited to territorial conquest, but continue to be effective well into post-colonial societies of the 21st Century. Moreover, as the curators point out, acts of “othering” are not restricted to geo- or national politics, but also happen at the level of individual interactions. The curators’ point of departure is the two-fold recognition that these processes are alive and well, both in society at large and in art institutions—not least in the form of “African” or “Arab world” shows that have proliferated in Western art institutions in recent decades—in order to then call for an antidote in the form of acts of “dis-othering”.

For dis-othering to work, the curators explain, there needs first to be a recognition of these processes and then each individual must resist succumbing to the “othering” to which they are subjected, and in turn resist the urge to belittle, or “other” others. The fundamental pre-requisite for dis-othering, then, is empathy: only if you feel what it means to have been othered (on the basis of race, gender, class, or other constructed categories), will you be able to resist perpetuating the process, even at the cost of discomfort. Citing Octavia Butler’s 1993 novel Parable of the Sower, the curators call for an empathy able to embrace “all conditions of the world”.

In the central gallery space, on opposite walls, two series of photographs address the way in which senses of belonging or not belonging are constructed. In Estonian race (2010–11) by Tanja Muravskaja the heads of young white men with their hair shorn, all photographed at the same angle, are aligned like soldiers. A fictitious, but all the more potent, idea of a homogenous “race” rooted in the Estonian territory is presented, from which by definition all but bio-Estonian viewers are excluded. By contrast, on the opposite wall, the series They don’t care about us (2016) by Mahir Jahmal—quoting Michael Jackson’s 1995 anti-discrimination hit song—can be read as illustrations of self-othering, or the internalization of othering, as experienced by people of African descent living in Western societies. Full-body black and white photographs show young black men donning clothes and poses drawn from hip hop, covering up and dissimulating more than showing themselves. The artist, who was born and raised in Austria, has crumpled and re-photographed the original photographs, adding to the effect of occlusion. 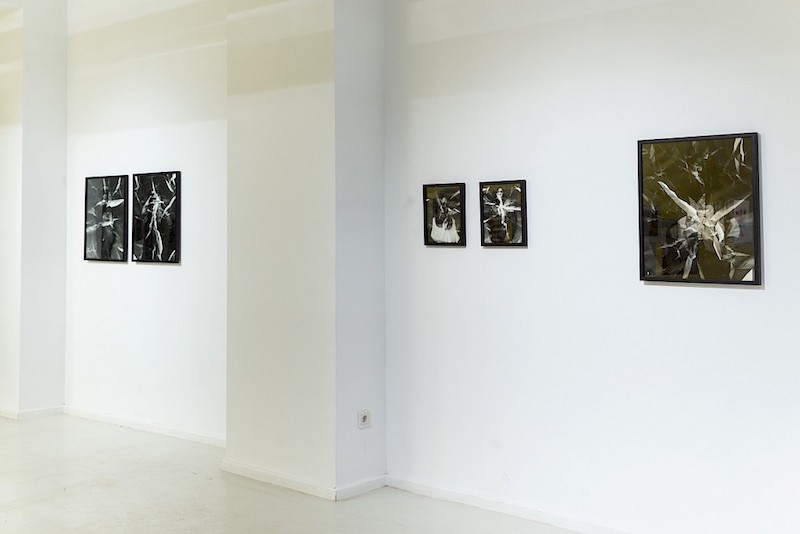 Mahir Jamal: They don’t care about us, 2016 // Photo by Raisa Galofre, courtesy of Savvy Contemporary

In the same room, the installation Am I the only one who is like me? (2017) by Saddie Choua presents a seemingly ubiquitous, unstoppable flow of media images perpetuating stereotypes ingrained in Western society, on TV sets on the floor: white politicians and film actors making unreflected comments; an all-white, all-male roster of singers on stage at the 1985 London Live Aid Concert. The naturalisation of racism carried forward by these TV images is subtly sabotaged by text superimposed on them, reproducing everyday “othering” remarks presumably experienced by the artist, who grew up in Belgium. Blasting from the installation is the hip hop song ‘Black Stacey’ (2004), which can be heard throughout the gallery, in which the singer Saul Williams calls for an opening up about one’s own vulnerability. The lyrics are reminiscent of Cherrie Moraga’s argument, in her 1981 text ‘La Güera’ cited by the curators, in favour of “an emotional, heartfelt grappling with the source of our own oppression […] within ourselves and outside of us”. 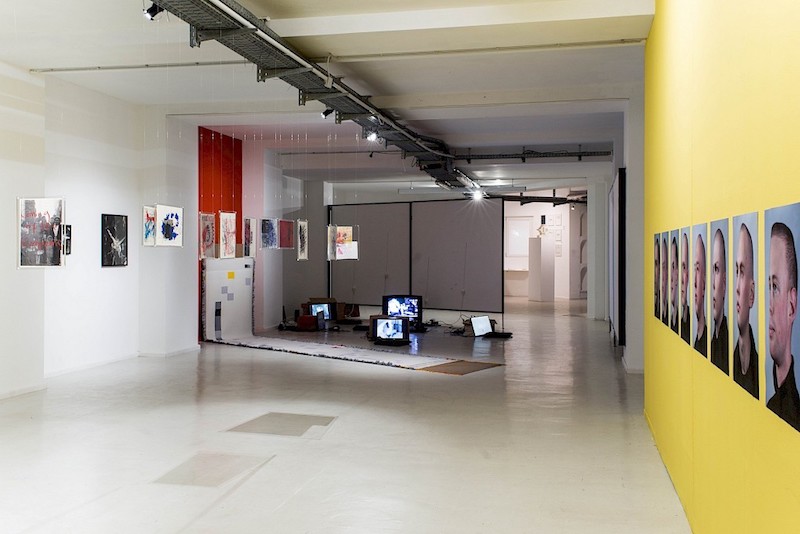 Installation view, ‘Geographies of Imagination’. Centre: Saddie Choua: Am I the only one who is like me, 2017 // Photo by Raisa Galofre, courtesy of Savvy Contemporary

The opening of the exhibition in mid-September coincided with a series of violent anti-immigrant protests in the city of Chemnitz, among others, which sent shockwaves across German politics, society and media. While in the German media anti-foreigner sentiments, particularly manifest in the regions of the former GDR, are classically explained with reference to the economic downturn in those regions, as Paul Mecheril argues, presenting this link as natural is a fatal mistake. By placing the mechanisms of “othering” in a larger historical context, on the one hand, and urging for strategies of “dis-othering” based on unflinching, necessary exercises in empathy, on the other, ‘Geographies of Imagination’ goes beyond illustrating the problems and presents important tools toward their solution.