In their 1978 song ‘The Light Pours Out Of Me’ the English post-punk band, Magazine, describe how “time crawls, time flies” and “jerks out of me like blood.” Martin Boyce references the song in the title of his current show at Esther Schipper. The notion of fluidity of light and time is not simply a poetic title, but extends into the fabric of ‘The Light Pours Out,’ Boyce’s first solo exhibition at the gallery. The Turner Prize-winning artist has previously made reference to light in his exhibition titles. In this show, he explains that he “wanted to have some form of light in the title because of the lanterns and the lamps,” in which light is both absent and present.

As I made my way around the exhibition space which Boyce has, in some cases imperceptibly, altered to create an uncanny quasi-domestic sphere, I felt a sense of familiarity with the modernist objects. This familiarity is undermined, however, by the feeling that in this space things do not operate in the way they should; light pours, time can be reached across and accelerated, a door lies on the floor, a partition can be seen through. I notice the sculpture in the centre of the room is an empty bed frame turned upwards. Strung from this peculiar lamp post is a light-bulb, the dust pink fringe of the lampshade engulfing most of its orange light. 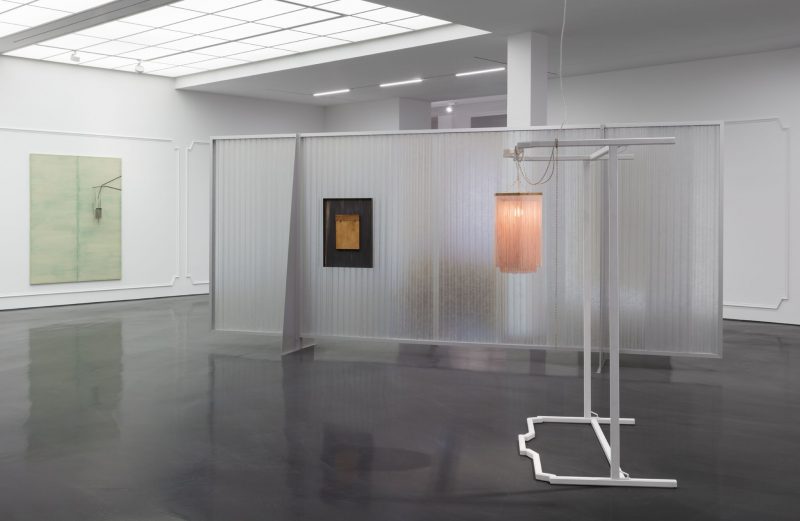 While this lamp seems somewhat futile under the bright lights of the gallery space, it is the absence or impossibility of light in the other empty lamps throughout the exhibition that is more unnerving. Boyce explains: “we have a lamp that has no possibility of illumination and there is the idea of the light having poured out of it…and it’s now empty.” In the empty lanterns, he continues, “the light is almost like a liquid… that has left its vessel empty.”

Like the bed, the emptiness of these objects has an emotional energy that evokes a melancholy affective response. Boyce was particularly interested in “the idea of implication through empty space;” “I was looking at 12th century Chinese art and the artist I came across was Mǎ Yuǎn (馬遠) who was very famous for his landscapes, where you would have these washes of very faint colour, these misty landscapes, and maybe you would only have a mountaintop in one corner, and a little blossom branch in another corner, or a fisherman in a boat.” 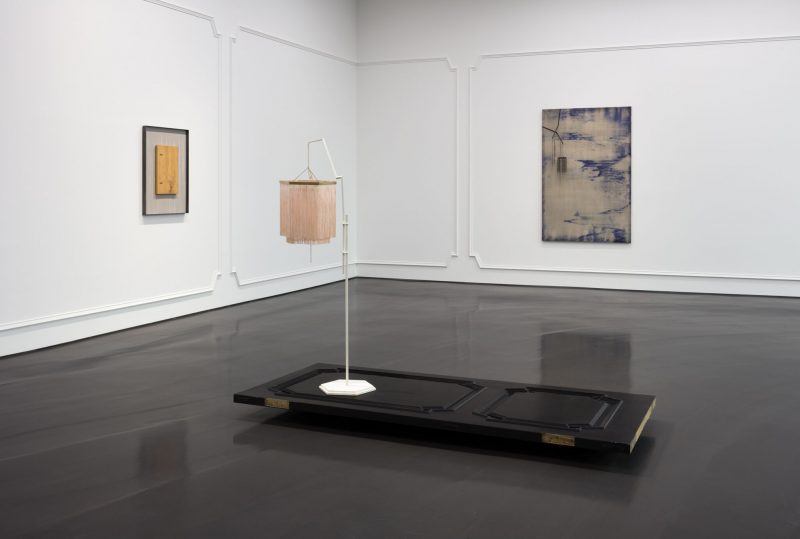 Works like Perforated Steel Panel Small (2018) recall the landscape paintings of Mǎ Yuǎn, the blue disappearing into a foggy white. There is an unassailable sense of landscape in these paintings and yet Boyce concedes “it’s kind of by chance… using industrial ink paint and then sanding the paint off, but then depending on how thick the paint is in different areas, it stays. So I would start to play with removing the paint, and then adding another wash of the paint and then sanding it back again and just building up so you get these different effects.”

While Mǎ Yuǎn’s paintings recreate lost poetic worlds, Boyce seems to reach across time, pulling objects from the past. He describes this as sculpturally quoting objects “maybe from modernist design and thinking about them being built through time and on that journey the conditions around them change.” Since his show ‘No Reflections’ at the 2009 Venice Biennale, he explains, he “really started to play with the surfaces almost like adding or applying time to the sculptures…you create a patina that looks like time or the elements have had an effect on them and, although technically it’s artificial, I would still equate that idea of almost injecting a memory into an inanimate object.” 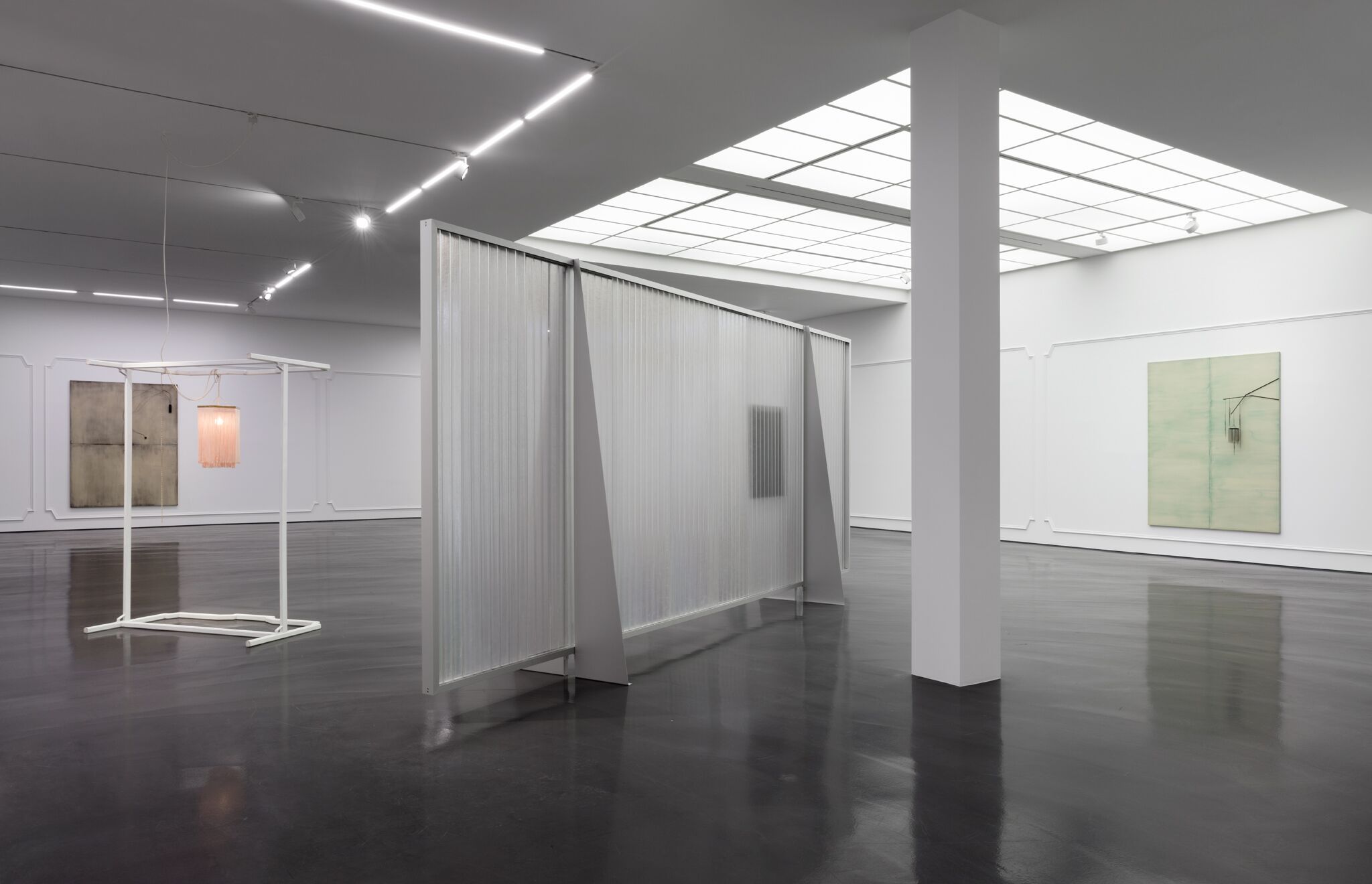 As in previous exhibitions, Boyce makes use of the Martel Brothers’ Concrete Trees (1925), from which he has created a kind of visual lexicon as well as a typography; “It was when I was living in Berlin in 2005, I had a fellowship at the UdK, I had this year where I didn’t have many exhibitions and I had more time on my hands and, in this new studio, I began to examine these concrete trees and started to make models of them and to develop a pattern and slowly develop a typography.” 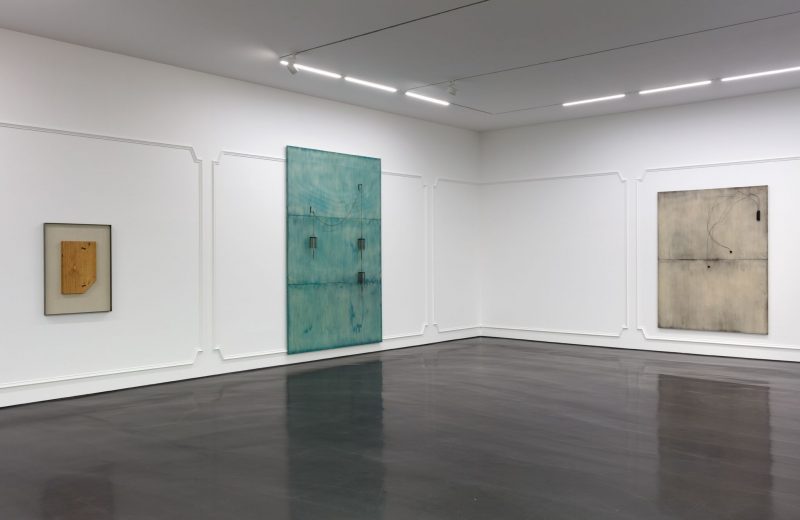 ‘The Light Pours Out’ 2018, Installation view // Photo by Andrea Rossetti // Courtesy of the artist and Esther Schippern

Boyce anticipated that after a year or so, a new image or object would present itself and he might move on from the Concrete Trees. From the moldings on the wall to the typography of A Remembered Lark (2018), Boyce notes that even in this show it is a language that remains present; “somehow the trees kept opening up and opening up. This palette of shapes that I developed repeats. In one way it is a set of limitations, but that can be incredibly useful. It kept taking me on journeys.”