Not until today, viewing ‘Womb Life’, had I ever drawn a relationship between clay in a kiln, a baby in a womb and the subconscious within consciousness. But these are the kinds of psychedelic connections that aptly describe Tamara Henderson’s artistic practice. She is one with a keen interest in material and symbolic transformations, who offers the alien creatures within the helm of her ship, seeing them navigate through self-defined systems of meaning, often at a remove from the conscious container that houses them. In her current show at KW Institute, this notoriously nomadic artist dives inside the human body to occupy the ultimate studio—the womb—showing how development in utero is not dissimilar from the growth of one of her sculptures in a workshop. 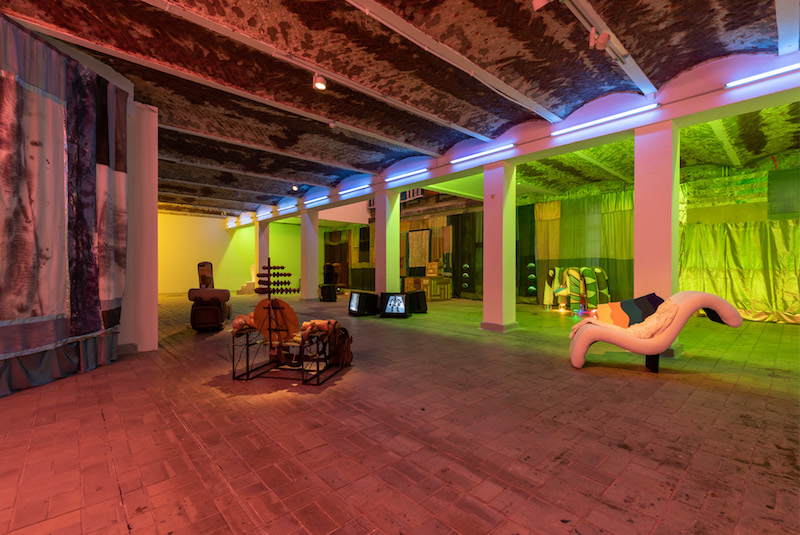 Henderson’s proposal for the definition of art is one deeply rooted in Freudian ideas of the Unconscious. To believe in Unconscious Motivation is to believe there are hidden cognitive operations shaping our behaviors. So hidden are these forces from our consciousness that they are akin to the functioning of our kidneys or liver, operating with complete unawareness. We are, in effect, alienated from these creatures living inside us. Henderson proposes that art exists not only as an act of sublimation but even as a means through which to meet those aliens face-to-face, by allowing them to take form; to become an object. And, for her, the meaning acquired by the object comes directly from the fact it has a form. “This object has a special meaning to you, how it has taken form inside you, and you have formed inside of it. It’s found its form, its meaning, its shape…,” coos the hypnotist in Language of Mud. 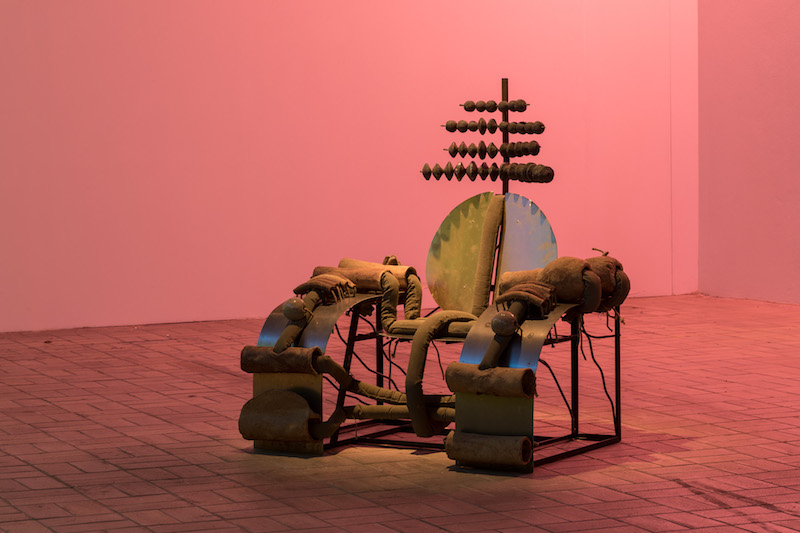 The imagery conjured across the five films in ‘Womb Life’ documents places, objects and activities so uncanny and surreal they seem to take place on another planet. Apparently governed by wildly differing forces of nature, this planet hosts inexplicable events; the explosion of structures from no visible cause, the wild spinning of clock hands, foliage moving of its own accord and the apparent lack of verbal language. An odd amount of signification is given in this world to rather unintelligent gadgets, constructed with a naivety not unlike the naivety Freud assigns to the Id. It’s as if things are built here in the way children build structures, purely for the purpose of being destroyed. Children at an age, that is, before the Superego arrives to give social meaning to their behavior, rendering it pointless. 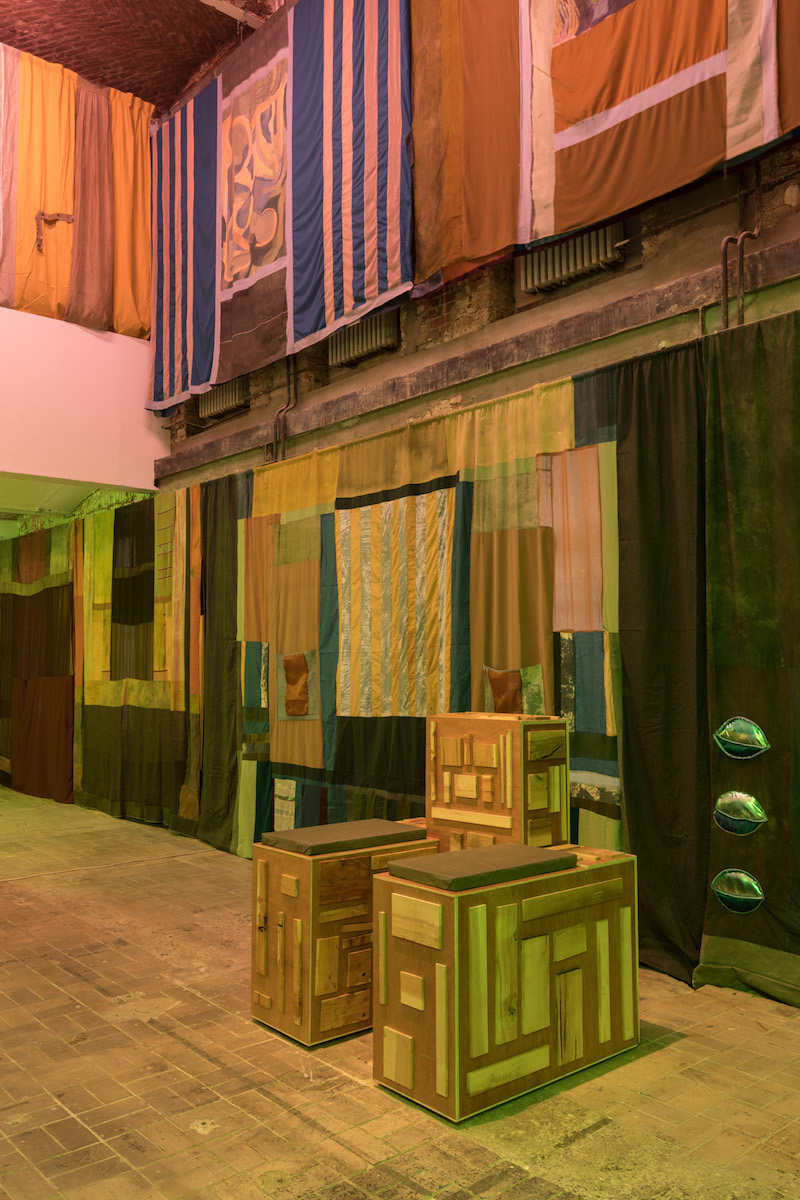 In Nomad, one imagines an environment neither past nor future, in which all organized industry has collapsed and the artist has retreated to a rural, nomadic way of life. Here, she must re-learn the foundational syntax of what it means to be human, including how to make things from scratch, what to do with them, what they signify and why. And one senses an unfamiliar amount of time and leisure to pursue her quest, without an imperative of to assign meaning, as if being human is about having lots of time and no answers. She fiddles about, breaking things, packing and unpacking boxes, fidgeting with quirky experiments and valuing objects quite arbitrarily.

Is this the Subconscious?

A clunky gramophone-like sculpture containing the sound of its own making (or sounds it has witnessed, or, even worse, sounds of abuse) echoes this question. The amplifier hidden inside Sound Shepherd operates more like a receiving ear than a projecting device, like a silent observing witness, like a young child, or an animal or a baby in a womb. “If these sofas could talk,” I thought, or, rather, “if these aliens inside us could talk,” they would tell of dreadful abuses, of being punctured by felting needles, scraped with wire brushes, or sawed in half. That, I suppose, is our common internal torment. 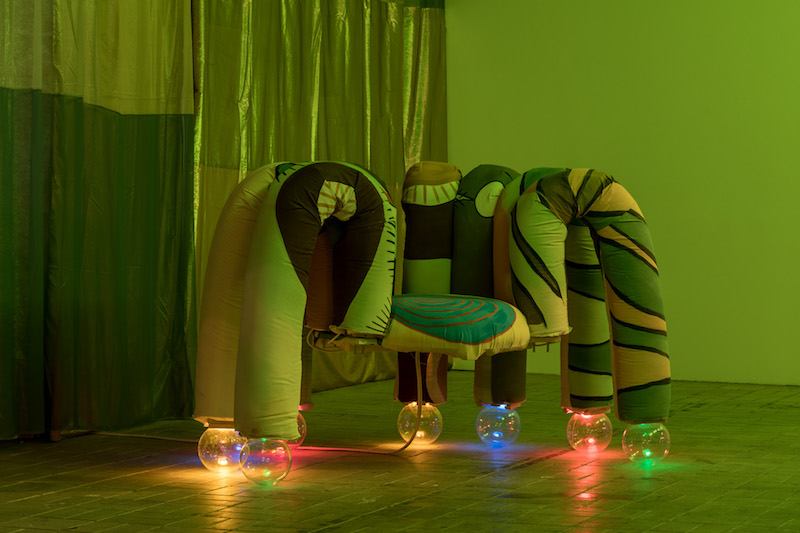 But it’s not always that bad, being inside the subconscious. Sometimes these aliens leave their hermetic workshops and coalesce, hauling their party caravans down for an ol’ fashioned Detroit-style techno party, as in Sun Spider. They show off their newly meaning-endowed inventions, as if at a trade show, spinning them around on wheels and demonstrating their arbitrary functions. The techno soundtrack, born from a time of post-Fordian dystopia, harkens back to another such instance when new meaning came out of collapsed industry.

The alienation we experience from our unconscious is perhaps most succinctly visualized in a short clip in the video Eye, when the camera shoots an ultrasound screen in a doctor’s office. The absurdity of using clunky scientific gadgets in an attempt to see the greatest mystery in the universe— what is hidden inside the human being—is glaringly apparent. Not surprisingly, the image is totally abstract, seeing only an amorphous coagulation of differing densities of matter. There is no shape, no meaning, no syntax, and without theses things there’s a question of whether we’re seeing a human at all.

There’s a phenomena some women experience after birth, in which they reportedly exclaim in astonishment, “It’s a baby!”. It’s as if until that moment they had honestly questioned whether a real human was growing inside them and not an alien. It seems like a good metaphor for the practice of Psychoanalysis, as if the goal is to give you the ‘Aha’ moment, like: “Here I was thinking I came from outer-space, making bizarre decisions I can’t explain. But it turns out I am a human after all.” And that’s where Psychoanalysis drops you off. And where the real mystery begins. 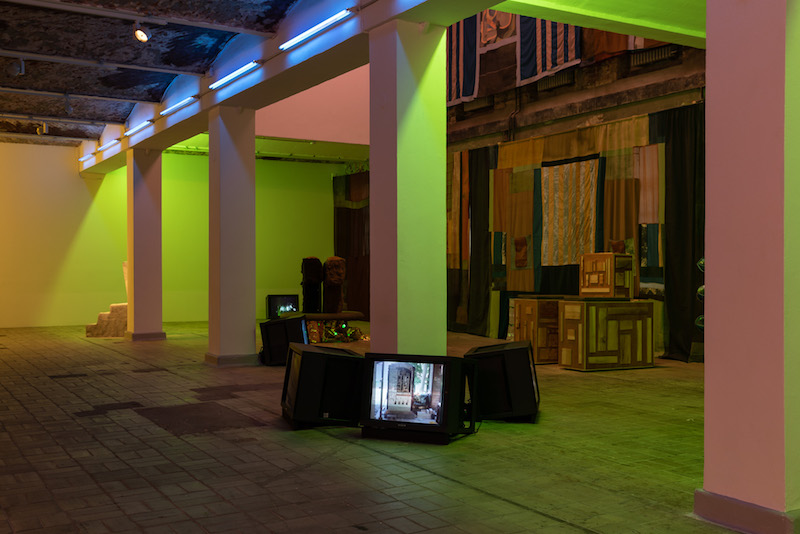 And this is also where Henderson’s work lets you out. The alien subconscious is permitted to incarnate here, to take on a form, to become an object and acquire meaning, but the implications of this object remain a mystery. We can inscribe signs with meaning but the limitation of both Psychoanalysis and Henderson’s work is that this meaning is merely an arbitrary and wholly metabolic system of symbols that ultimately tells us little about its own formation. But perhaps this trap of self-fulfilling prophecies only goes to illustrate the opacity of the kiln wall, the impermeability of the womb or the irreconcilability of the conscious with the subconscious. In the end, to occupy the position of the clay or the fetus or the creatures of the unconscious is to accept that you don’t know the implication of your own being. You only know manifestation and change, and perhaps that’s a very honest answer.