As Arab culture runs through the veins of Germany’s capital, the evening of ‘Arab Shorts’ – part of Berlin’s Interfilm festival, which screened on November 23rd – was as relevant as it was profound and political. The series of short films yielded a multidimensional delineation of Arab culture in a relatable context, while also illuminating cultural facets unique to Arab societies. The short film program aimed to break stereotypes built by the media and to celebrate the diversity of Arab cultures.

3 Centimeters, written by Lara Zeidan, is a 9-minute film shot in one single take, addressing open sexuality within the framework of friendship and trust, with Beirut, Lebanon as its backdrop. Four young girls ride a ferris wheel on the Beirut shore, discussing boys, sex and love, until one of the characters suddenly and uneasily comes out to her friends as a lesbian. The initial reaction of denial and anger displayed by her friends, leaves a stinging and intimate sense of how societal norms affect even close circles.

The film is open-ended, leaving the audience unsure if the girl will be accepted by her closest friends. After the screening, Zeidan spoke of her own struggles with this topic, which led her to shoot the film in one take on a claustrophobic ferris wheel car. The effect of this cinematographic decision creates a feeling that distinctly emulates the discomfort associated with such an intimate conversation. While many have come to accept the LGBTQ community in Lebanon, she shared that it is still illegal to be queer and, as in many societies, is still a sensitive topic.

Are socio-political views more important than personal relationships? The 27-year-old screenwriter takes on an enormous list of themes in just one take, ranging from friendship, trust, intimacy and self-acceptance in Arab countries, but also worldwide. 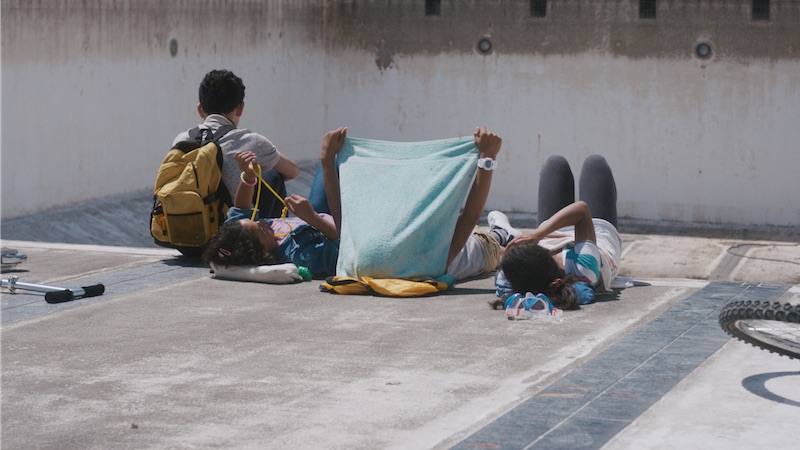 Yassmina Karajah’s film Rupture is both heartwarming and nostalgic of playful youth, while simultaneously addressing the crisis in Syria. The film opens with the sound of an English-lesson audiobook that one of the main characters, a young boy, is listening to on headphones. He and his family have escaped Syria for Canada, and he is acclimating to his new home. The young boy then overhears his mother learning that his brother, left behind in Damascus, had been shot and is in the hospital.

He decides to keep this from his sister and friends, as they search for a local pool on a summer afternoon. Their close bond makes the discovering of this new home a seemingly effortless endeavor, leaving the audience grinning at their playful manner throughout the film. They scooter and bike around, dance, sing, gossip on Facebook, run through brightly-lit shopping malls, take silly photos in the booths and go to the arcade. The looming stress of the bad news is suspended with every minute, as the film follows the children in their everyday discovery of this new place.

As the English-lesson through the boy’s headphones continues, Karajah reminds us of the struggles experienced by refugees and immigrants, beginning with the enormous language barrier and delving into the traumas experienced back home. The use of children and their inherent positivity and playfulness, shows the potential for resilience. As the boy wipes the tears from his younger sister’s face upon sharing the news, the film closes, leaving the audience with a bittersweet taste of hope and a concurrent awareness of the difficulties of the present.

Perhaps the most difficult film to watch in the series was Fatima Matousse’s Family in Exile, a testament to the critical gender imbalance in certain Arab households. Serving as a resistance to the extreme patriarchal society still upheld by many in Morocco, Family in Exile is a deeply personal documentary about Matousse’s family, which reveals her father’s refusal to interact with his wife or daughter, although he lives just one floor below them. The documentary is crafted with simplicity, with shots of her mother and grandmother cooking and cleaning, and cuts to them sharing their fear of their own husbands and fathers and the traditions they have been forced to follow.

Although the story is inherently tragic, the characters are laughing throughout; Matousse’s mother and grandmother joke about marriage being the biggest mistake of their lives. A soft grin diffuses the gravity of the situation, after one explains the lack of free-will afforded in the choice of husband. The footage is raw because it demonstrates a necessity for sheer resilience, yet again, and also shows the strong presence of communal support within certain Arab cultures. The audience hesitantly laughs along with the subjects, even as a lump develops in their throats. The few moments of harsh reflection are therefore immediately sensed in the subjects’ voices and expressions. At one point, Matousse’s mother shares her reluctance to let her daughter in the house, late at night, because she fears “her father will kill her.”

The intrinsic emotional impact of the film makes it activist in nature. Matousse’s mother shares—again, with a smile—her privilege of realizing all her dreams through her daughter’s pursuit of everything that she herself was unable to do. Although it tackles heavy themes, Matousse’s tactic of light-hearted simplicity resonates the most, as her subjects’ colloquial and resilient nature speaks louder than the story itself.

Just as Arab culture cannot be encompassed in any one tidy package, the evening of ‘Arab Shorts’ exposed everything from the unknown and misunderstood and at times overwhelming, to the beautiful, delicate and universally-experienced aspects of human life, in a genuine representation of the multifaceted qualities of Arab culture.