It is often said that cars are prostheses of humans, their performative qualities enabling the extension of natural features. Less often we realize that cars, too, can be prostheses of the landscape, having the potential to expand our perception of it.

Alfredo Aceto has always been fascinated by cars. For him, their appeal is rooted in both their material as well as ethereal, incorporeal features. They are ephemeral, decadent objects. However, for the exhibition ‘Azure’ at Dittrich & Schlechtriem—his first solo show at the gallery—the young Italian artist draws on the physical attributes of the car. More precisely, he glorifies the design of the Azure convertible by Bentley: its design turns it into a creature that blends in with the landscape, its lines follow the horizon lines of the Côte d’Azur. 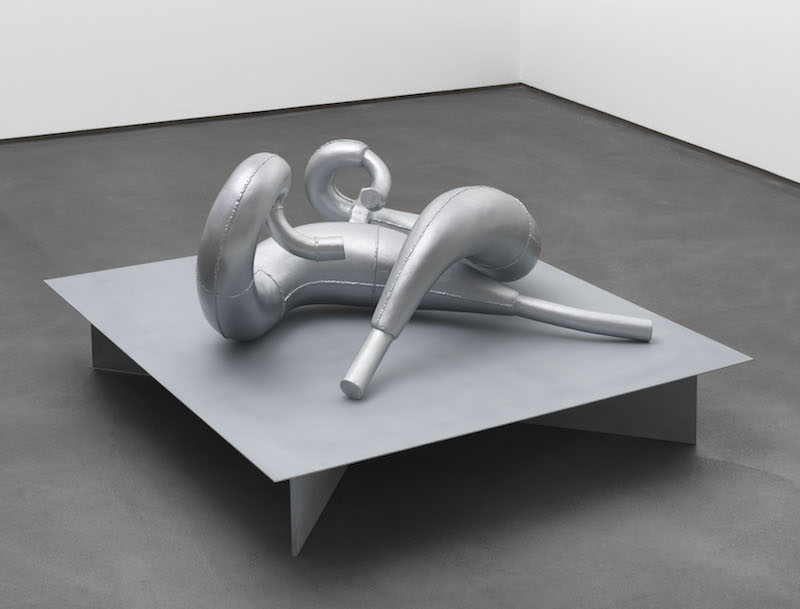 Walking by the gallery, our attention is captured by the curious beings populating the underground exhibition space, like mysterious animals in a fish tank. No one would immediately guess that they originate from car mufflers, gold rings and rain gutters. This is the magic of Aceto’s practice: he ingeniously transforms the objects’ features into ones that take on a life of their own.

A gargoyle figure stands as a guardian with its fierce fins in the middle of the room (Gutter-Hydrant, 2018). The original shape that engendered the piece, a gutter, has now become an epic figure. Aceto’s work is deeply rooted in a philosophical discourse that probes the contemporary role of the object as vessels of new meanings. He often stages objects that have been stretched and altered in their temporal or physical conditions, resulting in a creation that is, consequently, a brand new narration. 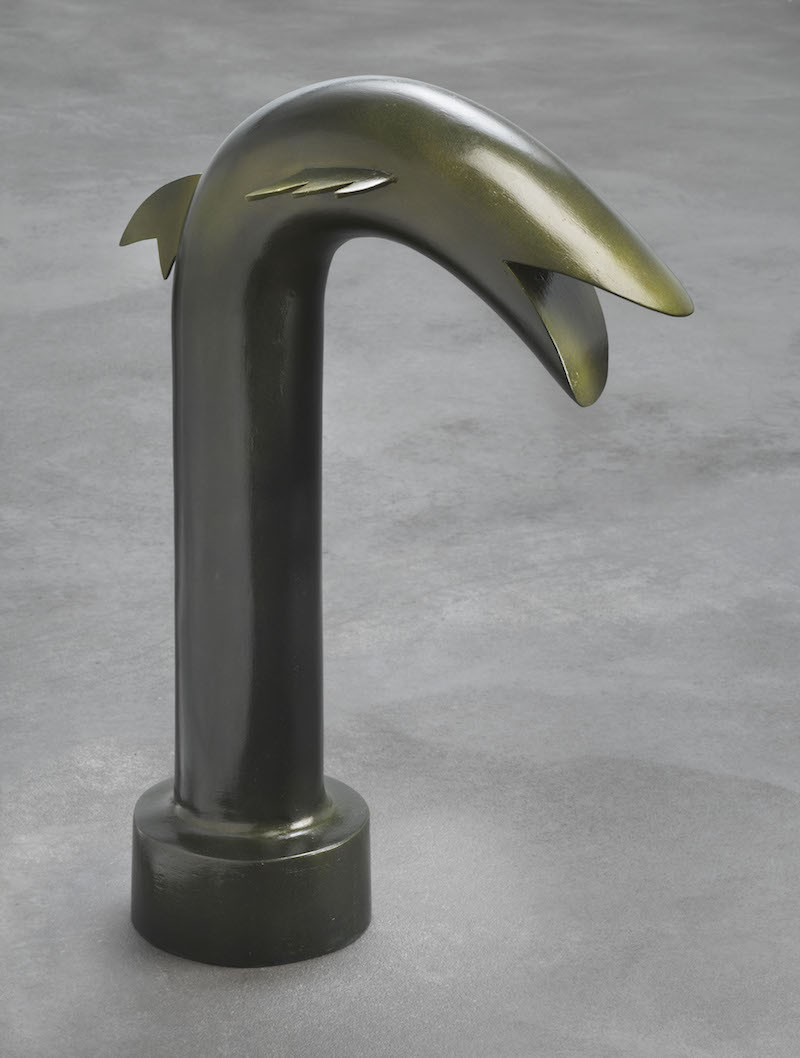 In Aceto’s vision, form is not a cage that forces the object to its predetermined status. On the contrary, it is a shell turning the thing into infinite possibilities, leading it to freedom. His work is reminiscent of Adorno’s theories: observing these works, we perceive a physical, almost cartoon-like representation of his principle of the autonomy of art. Art has finally become independent from institutions, the philosopher states, but this autonomy has become problematic within capitalist society, which turns everything into consumption. Nevertheless, the autonomy from the empirical world and its constraints is guaranteed to the artwork due to its form. The work of art, in fact, being a form not aimed at a specific purpose, can oppose the consumerism society. With this in mind, these works are fully free, being born in order to be pure form. Aceto’s practice could be thus read as an attempt at rescuing the object from the paradox of the artwork as a capitalist object. 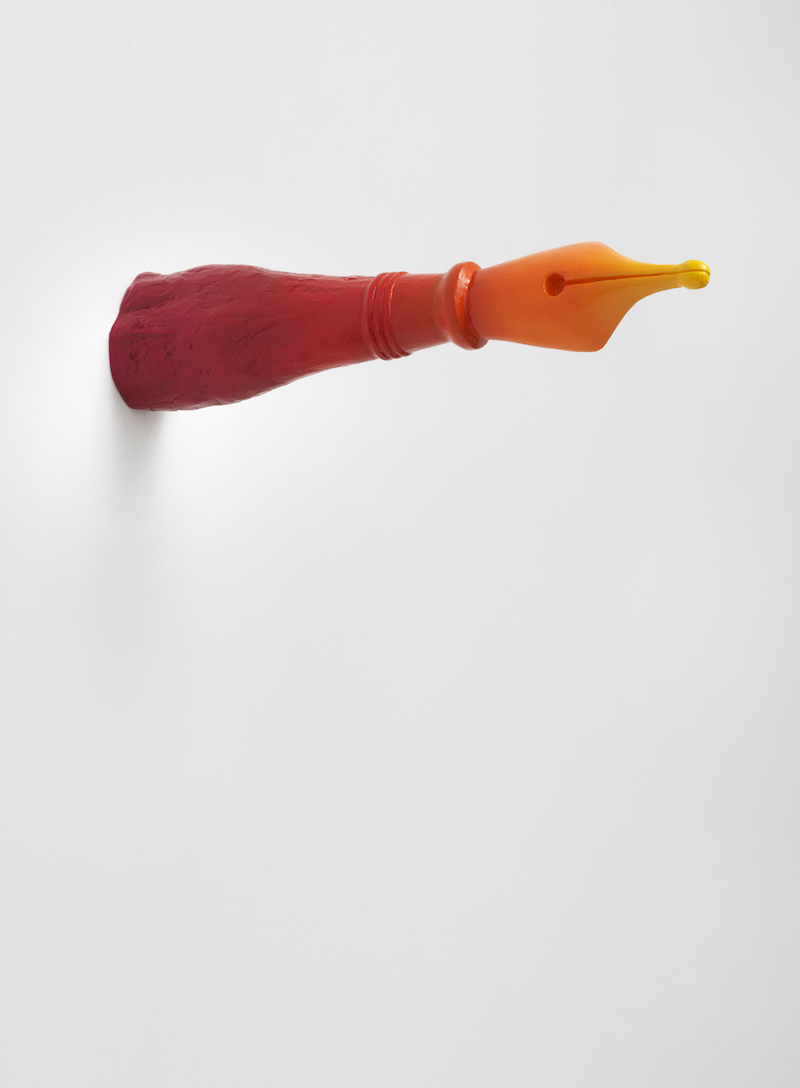 The contemporary artist, a modern demiurge, is also an alchemist who affects physical interventions on materials and shapes. Two items become one, what is hidden becomes exposed, a tool becomes a symbol, black becomes color, past becomes present, small becomes big. With new semblance, new function arises. Like the Azure car whose parts are like a landscape prosthesis, these new objects are prostheses of themselves. This is what animates Aceto’s works in the exhibition. The manipulation of form amplifies, as a consequence, the intrinsic narration of these objects, celebrating their iconicity, and sometimes their banality, as seen in Pen with an Arm (2018), a protruding pen-like gargoyle, shining in glossy red paint.

Nevertheless, this artistic practice is unrelated to the Duchampian act of de-contextualization. The object is removed from its context, however not with the intention to transform it into art. Curator Caterina Molteni states that Aceto’s research is linked to Heidegger’s theory of the Thing. This posits that an object reveals its essence when it breaks, now detached from the role it had in relation to man and other things. But this may lead to the risk of raising its interpretation to somewhat of a heroic object. The curator then describes the artworks as anti-heroic: they free themselves from the weight of their role by taking on another role. 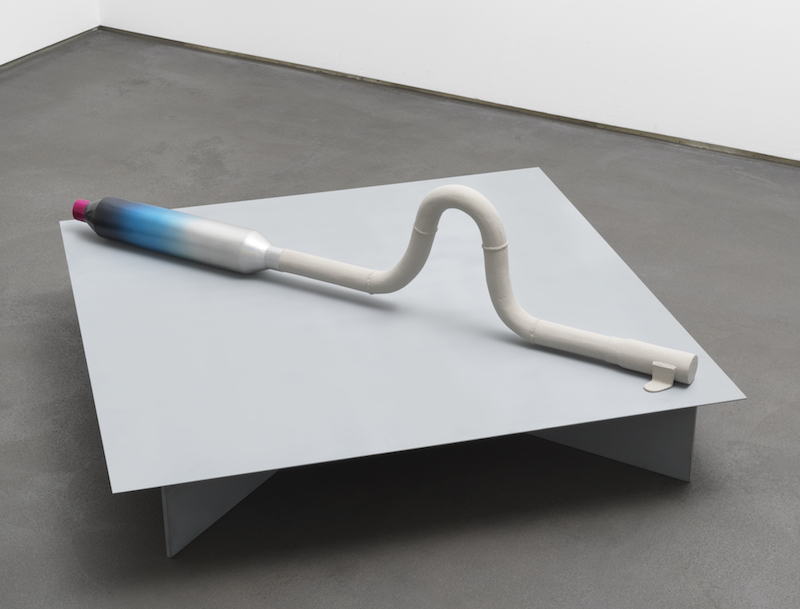 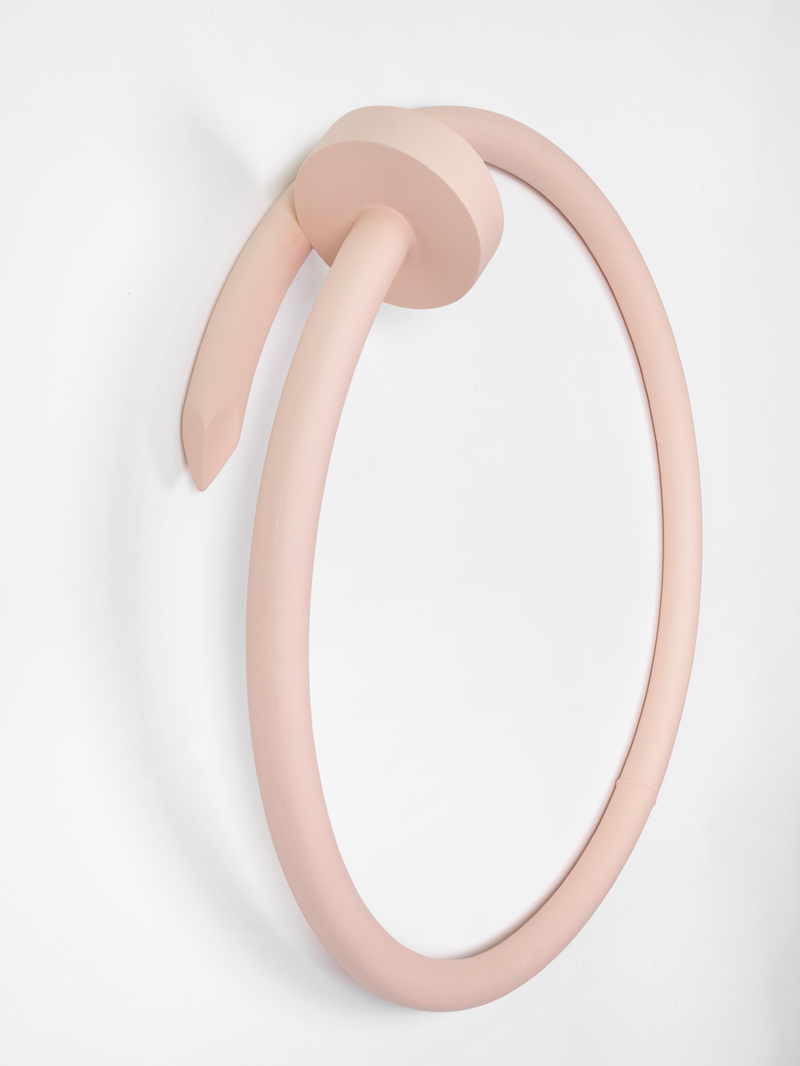 Echinoidea (2018) and Olive Sea Snake Digesting a Watermelon (2018) are not mufflers anymore. They are new charming objects—whether they’re good or evil is difficult to tell—and they invite us into an alternate reality. Simultaneously, a voyeuristic sense of novelty also abounds: while undressing and dressing the objects with their new parts, Aceto allows us to see their true, nakedly vulnerable essence.

In this show, Aceto’s research is brought to a new level, as he dares to reinvent highly praised and admirable iconic objects, like a Cartier ring. Juste un clou rose (2018) is an oversized and sensual pink sculpture, appearing like a close, impudent inspection. In ‘Azure’, the figures are highly sensual, characterized by a strong identity that lies perfectly between mighty sculpture and delicate conceptual presence. They belong to the category of sculptures, as they are sturdy, attractive objects. Yet, they are pure and conceptual, standing as epitomes of transformations.