What started as a side hobby became photographer Peter Bialobrzeskis latest project, ‘City Diaries’. It sounds like everyone’s dream job: Bialobrzeski travels throughout the world, taking photos of different cities. Specifically, he aims to record the urban landscapes and show what postcards and travel books fail to capture. As globalization continues to connect the world, Bialobrzeski’s photos reveal what sets cities apart from each other.

Photos of the already-published diaries from Athens, Wuhan, Beirut, Cairo, Kochi, Taipei, Zurich and Wolfsburg are currently on display at the Robert Morat Galerie in Berlin. Since 2013, Bialobrzeski has photographed 15 cities, spending about seven to 10 days in each, but the project is ongoing. Budapest, Osaka, Bangkok, Manging, Minsk, Hagen, Belfast and more are soon to come. He has also recently finished another series called ‘Zweite Heimat’ where he documents the contemporary culture and climate of his homeland, Germany, and another project in the Mumbai suburbs. 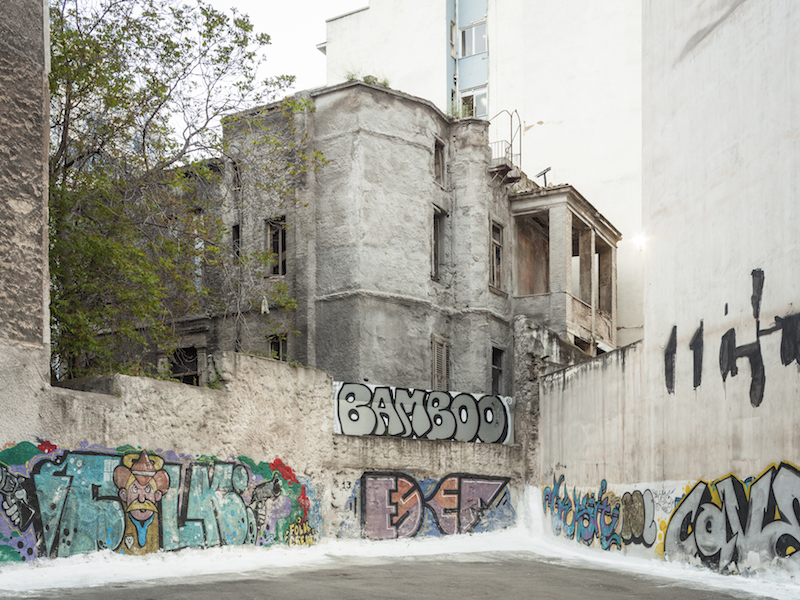 His city diaries are focused on maintaining as much objectivity as possible, with relatively consistent aesthetics using the same camera and lens, almost always with a long-exposure. The resulting photos are not to be mistaken as photojournalism, as he does not share people’s stories or report about culture or history. Rather, he finds his purpose in simplified but genuine and captivating visual records of urban societies as they are today. We spoke to Bialobrzeski about his diaries and how he hopes they will stand the test of time.

Sofia Bergmann: When researching about your series, I found it interesting to read that your photos aim to examine “whether the design of a picture of a city fed by prejudice, what has been found, and what has been conveyed by the media can be transformed into one specific image.” Can you tell me more about how you aim to show cities to people with regard to their potential misconceptions?

Peter Bialobrzeski: I don’t care so much about what people think about cities. I think in photographing a city in a seemingly objective manner, every city has a certain identity of its own. In the age of globalization we talk about phenomena that are the same everywhere, but if you look at a city close enough and weed out all of this [globalization], you can identify that there is something very, very different there that is fuelled by the culture.

A good example is when I did a diary in Wuhan, mainland China and one in Taiwan (Taipei). They essentially have the same cultural background, but even only 70 years of different political systems has changed the surface of Taiwan. The mood when you look at the Wuhan book is very different than the Taipei book. I’m using photography to understand, by simplifying the process. In my photographs nothing is happening, they’re not dramatic. 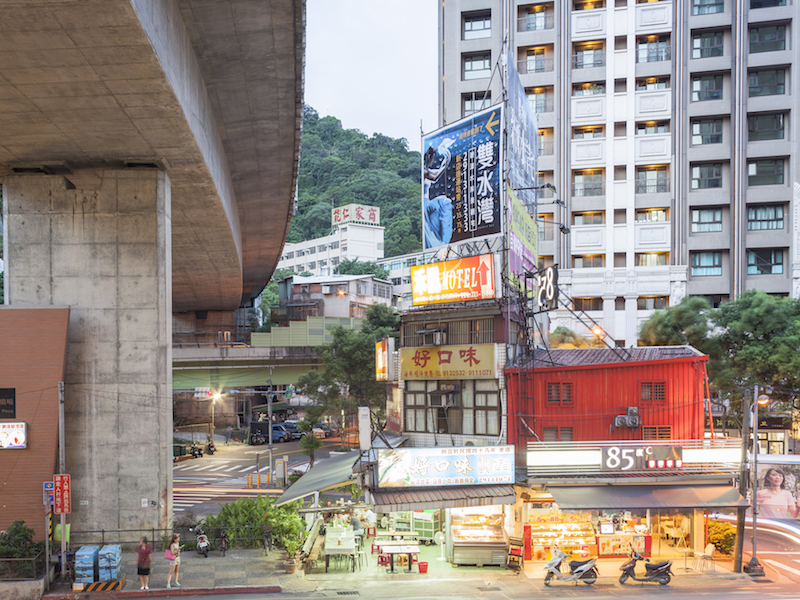 SB: You say you try to find a certain mood that connects the images. What made you choose to take these consistently complex, chaotic and undramatic street shots with little narrative?

PB: For me, the urban environment is what is interesting. Everything that is anecdotal: markets, tourist sites, etc., I’m not interested in. In a way, I’m like a 19th century photographer. The one thing that really triggered it was when I was invited to the Chodi Mehler Festival in Dhaka, Bangladesh. I did a Google Image search of Dhaka and the only images that you find are color pictures of the sites and poor people in black and white. But you don’t actually find what the city looks like, and that happens to a lot of cities. In a very simple way, I can show people what they can’t see, and at the same time make an archive of the city.

SB: If you are trying to show people what they normally cannot see, why do you choose to leave out a lot of aspects that can speak on the culture and history, for example people or art?

PB: Thirty years ago I worked on a lot of stories with people. I worked with GEO, I photographed in South America, people in shanty towns, people in their homes, people with AIDS. I was very close to people. So I moved away from this because I don’t want to use people for mystique in my work. At the moment, I’m interested in the structures that shape our society.

SB: You said in a previous interview that you feel more at home in places like Mumbai than in Paris, which is why many of your photos are set in Asian cities. I’m curious about what makes these places feel like home?

PB: I think I must have lived there in a previous life. There is a certain kind of connection that I can’t explain. Why do I like the food? Why do I like the smells? Why does it not disgust me that it’s so chaotic? I don’t know. Paris is nice, but I feel like somebody is putting on a show for me.

SB: Do you think people can detect your different connections to places through your photos?

PB: I don’t know, other people are better at describing my photographs. I can describe other people’s quite well, but not my own. A lot of things are not so easy to read if you don’t know a place. One of the big misunderstandings in photography is that the viewer is never able to see the full intention of the image-maker. I think you have to be a very experienced viewer to get this connection, and be very familiar with the place.

For example, in my ‘Zweite Heimat’ series, only people from Germany can connect. If you show it abroad, it creates a very different feeling. I got a call from a journalist and she had covered the financial troubles in Athens, and she said [‘City Diaries’] was the first time she saw Athens portrayed in the way she had experienced it. Interestingly enough, I tried to distribute the photographs through my agency and no magazine wanted to buy them because they were just too undramatic. I think the photographer has an agenda and if they’re a good photographer, they have something they can put in the photos that the viewer feels a connection to. 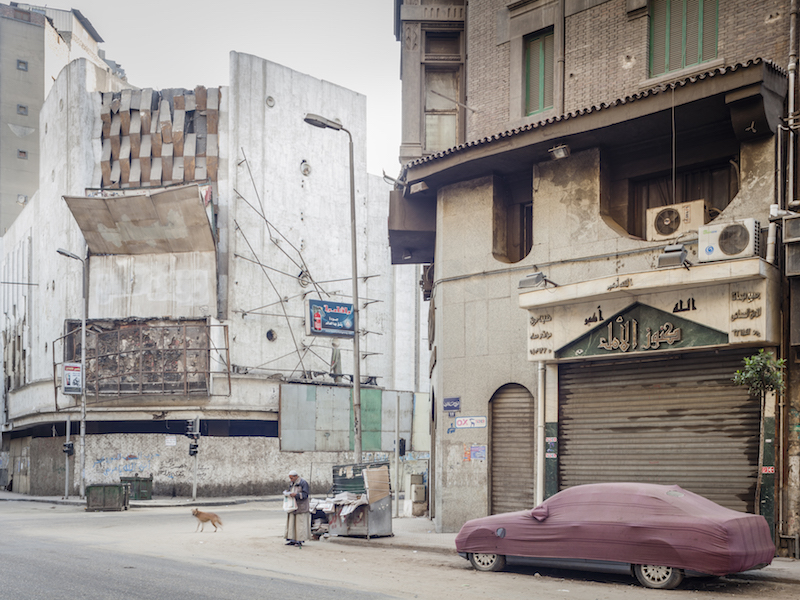 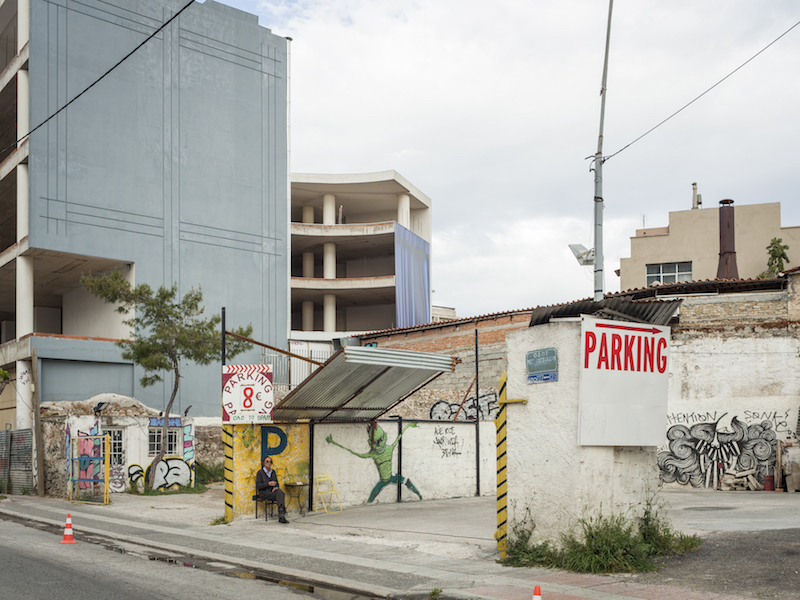 SB: Some viewers, specifically westerners unfamiliar with some places that you have photographed, might have distorted and exoticized preconceptions or stereotypes. One might directly connect Cairo to the Arab Spring, for example, unaware of the multidimensional qualities of the city. Do you ever fear your simplistic approach might further their biases?

PB: I think the people who go to art shows are pretty educated anyway and have a broad sense when looking at my photos. Of course, I hope these things, but this whole ‘photographers doing good and opening people’s eyes’ has become such a cliché: everybody is trying to do this now. I was on the World Press Jury and am very close to the organization, but the fact is that we have problems in the world and they’re on the cover of New York Times and Der Spiegel everyday. I’m more simple now. What I’m trying to do is contribute to archiving the world in a way that I think no one else is archiving it. “Is it interesting when we look at these photographs in 20 years time?” If the answer is yes, then I’ll do it.