Even if this may strike us as absurd, in a not-so-remote past atrocious surgical interventions were widely accepted as treatments for psychiatric conditions. This is documented in a rich iconographic heritage that would make your skin crawl.

Christian Fogarolli’s artistic practice has largely focused on archival research on the many different ways illnesses and mental disturbances have been cured in the past, and the social implications of these practices on personal and collective identity. 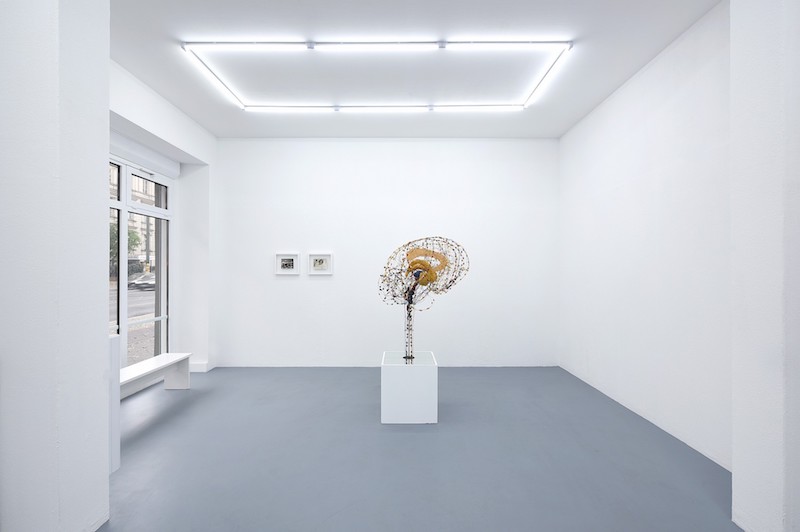 The show at Galerie Mazzoli, the first one in Berlin for the Italian artist, expands on this research and explores a theme he has been fascinated by, both because of its physical and semantic content: the so-called “Stone of Madness”.

The exhibition by the same name, curated by Nadim Samman, is an orchestrated composition of photographic works and installations that are inspired by the belief, widespread in the late Middle Ages and the Renaissance, that some mental disorders were caused by a rocky element growing inside the patient’s brain. It was believed that the imbalances of the soul (embodied by madness and social deviance) originated from this foreign body. Attempted extraction was therefore performed via disquieting surgical interventions, as documented in paintings such as Hieronymous Bosch’s Stone of Folly Extraction (1494) and Pieter Huys’ Surgeon Extracting the Stone of Folly (1561).

Following from the aestheticization of this brutal practice, in his exhibition Fogarolli aims to deliver to the viewer a tangible image of the infamous stone of madness. Fogarolli’s intention, however, is not exclusively critical, as we will see. 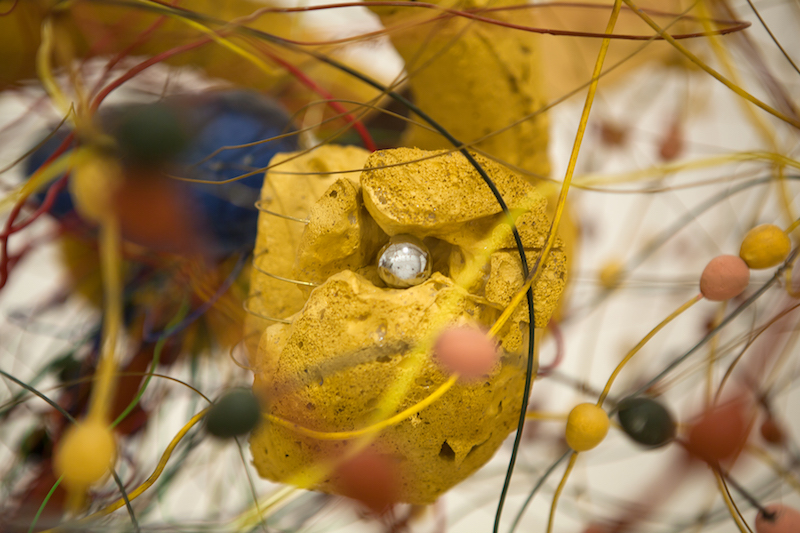 A huge model of the human brain, Phantom Model (2016), constructed by the artist, welcomes visitors in the main room: it’s the famous model designed in 1885 by the Czech anatomist Prof. Chr. Abey and Swiss engineer A. Büchi. It is a scientific tool, but also a fascinating and extraordinary object, which attempts to give a clear structure to what is still considered one of science’s greatest mysteries. The artist contributes to the borrowed shape by inserting a metal sphere within the core of the brain. The sphere naturally represents the stone, which can be interpreted here as a carrier of madness as much as the spark of genius.

Right in front of the brain model, a small stone is inserted inside Nietzsche’s Also Sprach Zarathustra book (Ritual of the eternal return, 2018). The artist collected the fragment from the place in the Swiss mountains where the philosopher would plunge into the inspiration—and perhaps madness—which allowed him to write his masterpiece, in which the idea of the eternal return is expressed. 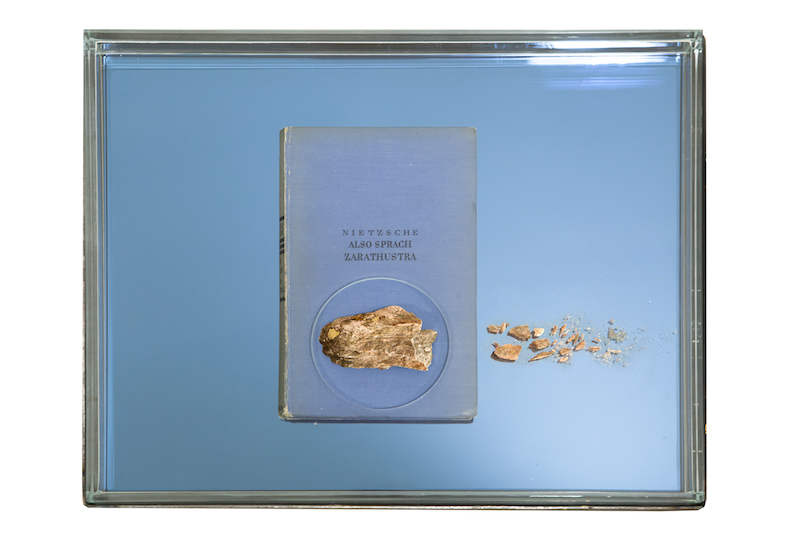 Christian Fogarolli: ‘Ritual of the eternal return’, 2018 // Courtesy of the artist and Galerie Mazzoli, photo by Riccardo Malberti

Next to this artwork, an elegant medical tool is displayed, where another stone is hanging. A small mirror almost at ground level forces you to lean forward to see what’s inside, unveiling your face, the stone mockingly appearing right next to your head in the reflected image. The pleasure of many of Fogarolli’s works, such as this, lies in the precision with which they are delivered, aseptic settings recalling something of the exactness of a surgery room, a feeling increased by the strong white lighting of the room.

In the second room, however, darkness seems to carry the stone theme to its alchemic side: in Allégorie de la Folie (2018) the artist himself is portrayed as the carrier of the stone of madness, which comes out of his head. The rocky material consists of fluorite, a mineral displaying a fascinating property called fluorescence, which allows the stone to reveal a different color when exposed to ultraviolet light. 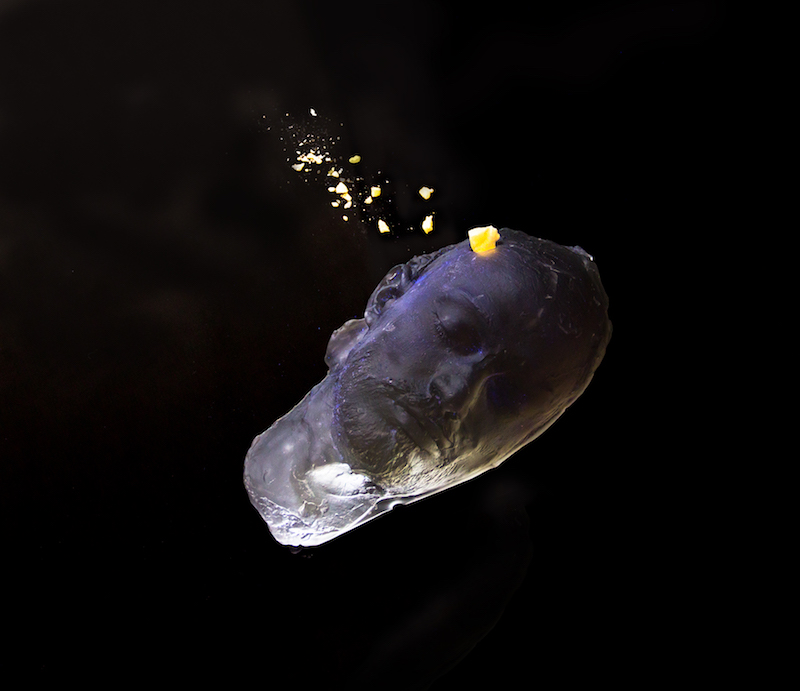 Fogarolli employs such stones not only because of their aesthetic appeal, but also because of social-historical references connected to them. Some beliefs, indeed, attribute healing powers to fluorite, such as the capacity to cure loss of memory. In this sense, Fogarolli attempts to rehabilitate the idea of the stone of madness, from a purely negative concept, to a metaphor of human individuality.

In the third room, more stones of fluorite reenact the stone removal practice. In these three works (in pink; in yellow ; in grey, 2018) the artist put them directly inside the head of the—again, anonymous—portrayed patients, as if he wanted to illustrate and thus exorcize the story behind these images. In green (2018) is a sleek polished steel structure that supports a small scale, almost suspended, on top of which we find a small photo covered in fluorite particles. The photo and the stone are magnified through an old lens, and lit by an ultraviolet lamp placed on top of them. 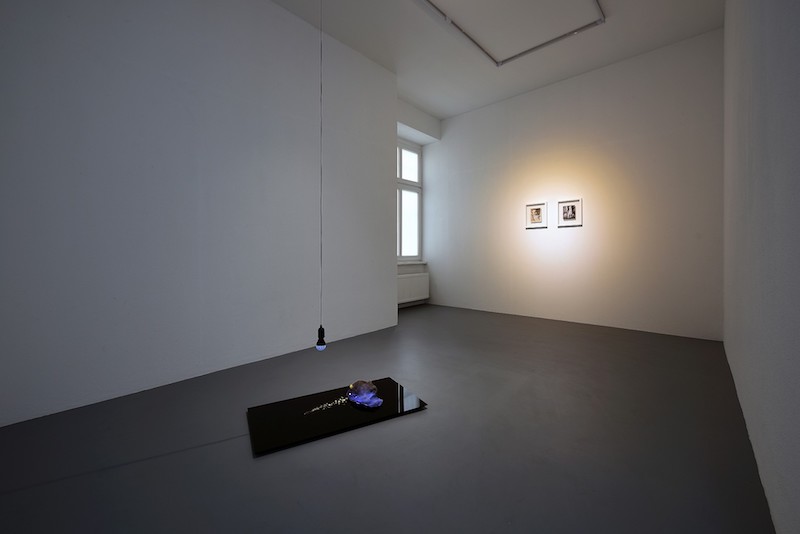 The remaining works in the show include the stone not as a source of madness but rather as a source of memory, as a cure rather than a symptom. These two works consist of black and white photographs of anonymous people suffering from amnesia, juxtaposed to photos of archaic stone carvings from a south-east Asian archaeological site, investigating a culture that has been lost. People without memories are thus provided help by associating them with stones that represent memories, without people behind them.

While the function of the stone changes, one could argue that most of Fogarolli’s works are informed by the attempt to redeem the faces and stories of former mental patients, albeit not in a wistful manner. Rather, Fogarolli’s process is para-scientific, and reflects the urge to complete a task that seems to be left unfulfilled.

With these new works, the artist therefore poses a question about the boundary between madness and creativity, between normal and abnormal. This is conveyed, from a formal point of view, with an original approach. Christian Fogarolli endorses the trend of those artists who, like Christian Boltanski, use archival material and old found objects (nineteenth-century medical instruments, old photographs, scientific tools, etc.). These findings are, however, combined with contemporary precious and elegant materials, such as titanium, ultraviolet led lamps and polished steel. This formal neatness is the reason why his work denotes a scientific methodology, rather than an interpretative, sensitive approach. It is this recognizable sign that sets Fogarolli’s art practice apart from his contemporaries.