The work of artist Florence Peake flies in the face of conservatism. Literally. Wet slopping clay, hurled across the gallery. Her practice morphs between performance, painting and sculpture and, though all the works have an insatiable energy, they are equally formal and reflective, and enormously refreshing. I first became aware of Peake through her exhibition ‘Rite: on this pliant body we slip our Wow!’ at De La Warr Pavilion (U.K) in 2018, which began with a performance and continued throughout the summer as an installation. 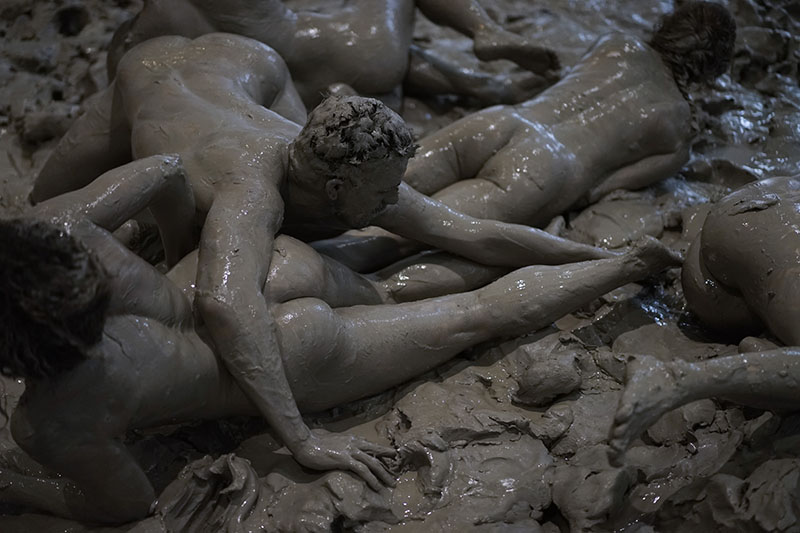 The work is a sculptural translation of The Rite of Spring, Stravinsky’s key modernist score, performed by five dancers. Peake’s interpretation follows its narrative arc as her collaborators’ bodies shape the landscape of the clay; slapping flesh, material and movement merge into a glorious, celebratory and defiant protest. At the heart of this is an instinctive bodily sense, a language outside of normative and/or patriarchal structures, one which is revealed through touch. I went to meet Florence Peake in her studio at London’s Somerset House, to talk to her about Rite, somatic experience and the intelligence of the body.

Rebecca Partridge: Your background is in somatic dance, could you explain what that is?

Florence Peake: I would say it is to do with internally referenced starting points like anatomy and the experience of our physicality and bodies. Touch and language are the two guiding methodologies rather than visual references associated with dance. With the somatic dance approaches I use, you pull the curtains over the mirrors in the dance studio and, perhaps, work with eyes closed; it’s the experience of movement. How do you know you have a body? If you take away the visual, it’s through feeling and touch, pleasure and pain and sensorial experiences. 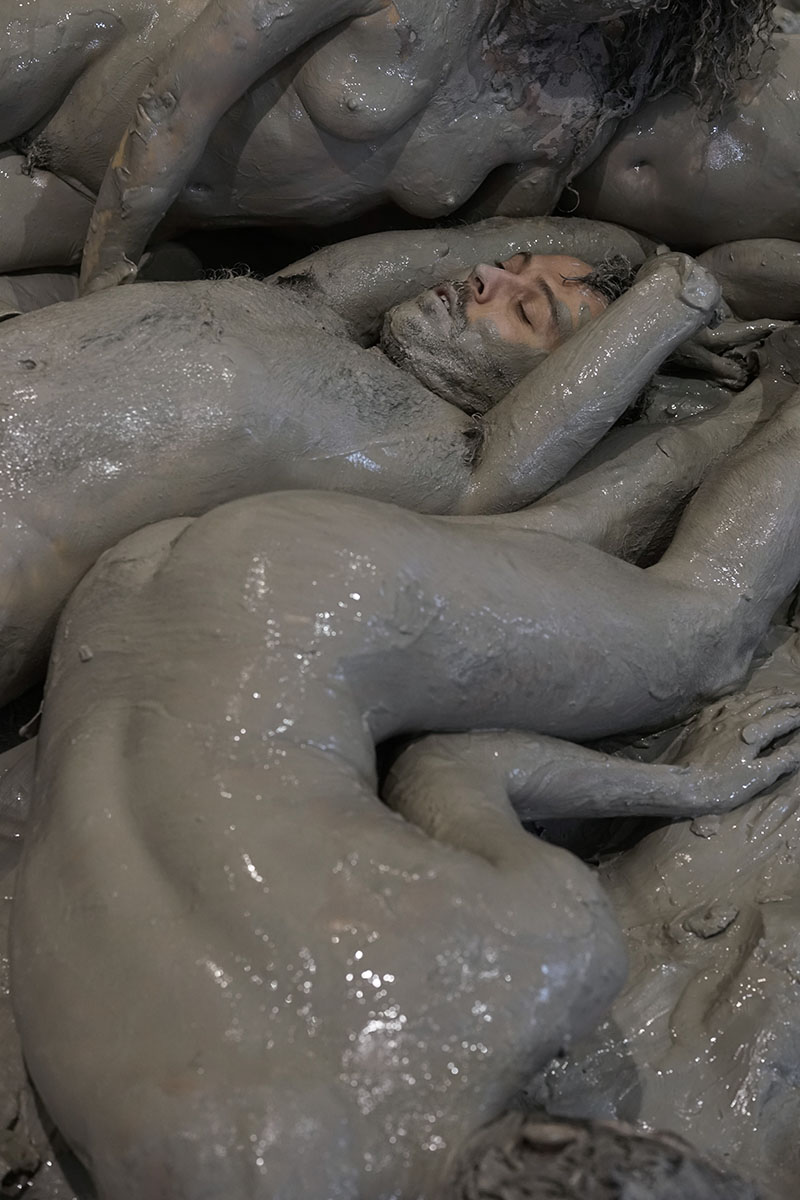 RP: Is there then a deeper sense of being present with yourself?

FP: It’s to do with where you place attention in the body. I trained in Skinner releasing technique, which was developed by the dancer Joan Skinner, who worked with Merce Cunningham and Martha Graham. The technique uses poetic guided imagery and soundscape with touch to release tension and extraneous effort in the body, allowing for maximum freedom of movement, whatever the constraints of a given body are. It’s very ethically exciting, involving principles that are at the heart of my practice. I trained in more traditional dance too but then took a radical departure as I find somatic dance is much broader in its information and range.

RP: In terms of your performances, how does your somatic experience then translate to me as a spectator? Is it about empathic responses?

FP: I am interested in the idea of kinaesthetic empathy. Kinaesthetic sense is very powerful and dance is a kinaesthetic art form, not necessarily a visual one. If you feel something, if you really embody an idea, I’m interested in how that translates and all the disjuncture between feeling and what happens visually/externally. I’m also really interested in that in relation to painting; in how a painting or a sculpture can perform back to itself, so it carries the history of the gesture but it also has its own autonomy and presence. In relation to somatic experience, it’s about attention and presence and how that then resonates in reading the work. 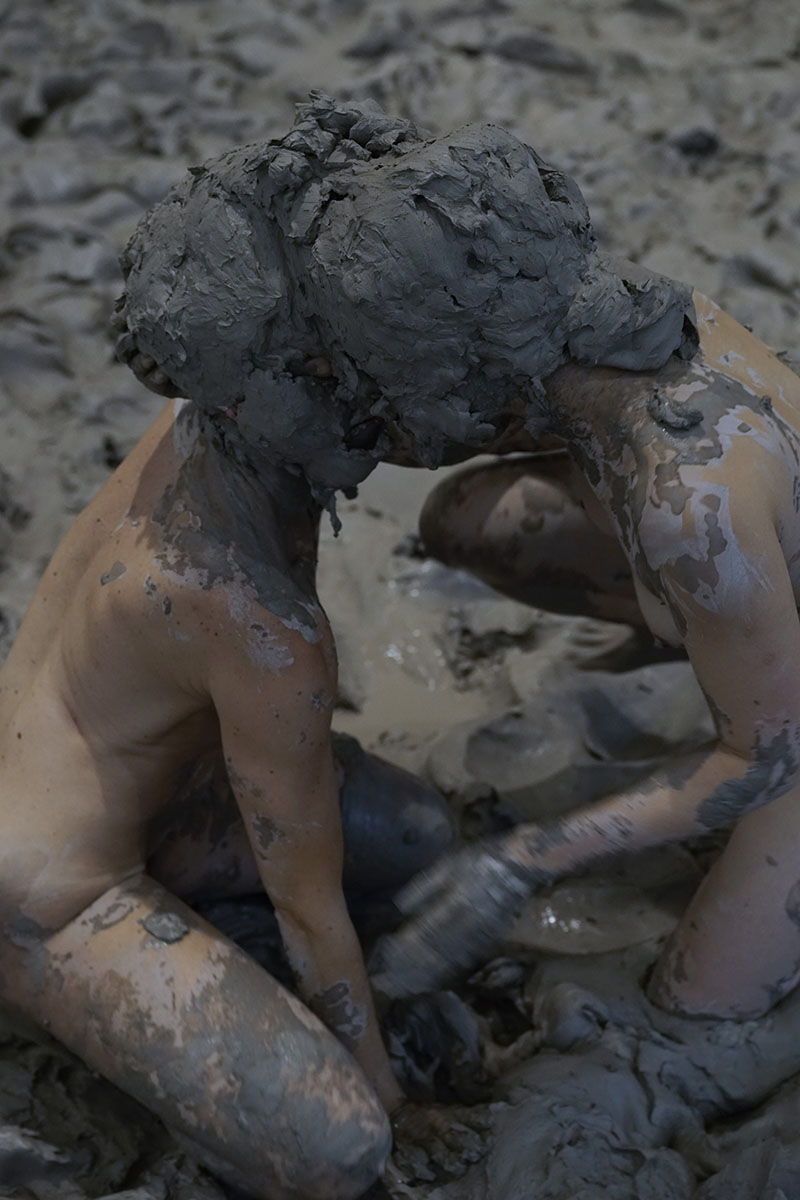 RP: Your performance and exhibition at De La Warr pavilion brought multiple aspects of your practice together. How were you thinking about this work?

FP: I was looking at the performance as being a sculptural interpretation of Stravinsky’s The Rite of Spring. The sound score has a huge physicality to it, like a landscape. You are flung onto cliff edges and big open plains of sound. It’s polyrhythmic and discordant, spatial but then uncompromisingly demanding. I was thinking about the fact that it has been 100 years since it was made, and of the infamous riot it provoked in Paris, and about the rise of fascism and the fracturing of Europe at that time. There are parallels to today with the rise of Trump and the far right movements. As they performed this, my collaborators could think of it as being a protest against fascism, an action that gets marked in the clay and on the walls that the clay gets splatted on. Clay is such a bodily material. There is a sense of it being a ritual. I was also thinking about the clay as a queer object, with the ability to merge or to transform itself, to penetrate and be penetrated by bodies. 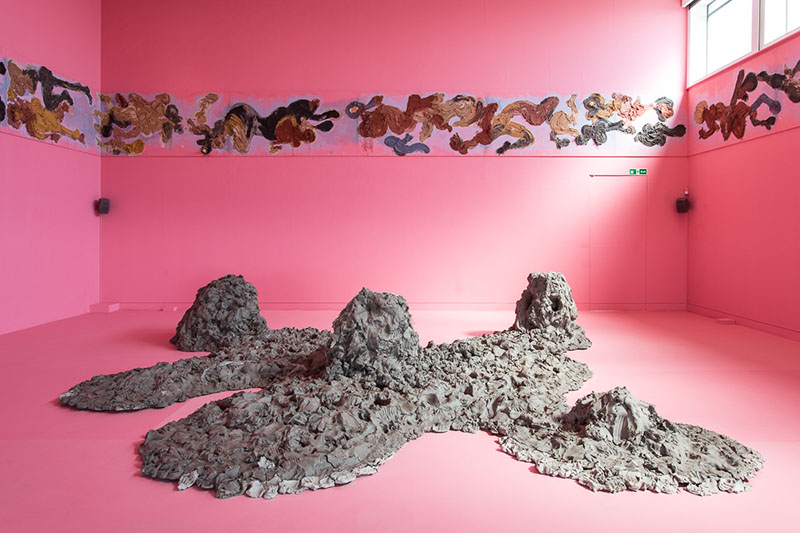 RP: How did that then transform into the installation in the gallery?

FP: We had six tons of clay with the actions of the dancers in it. We cut into and added to it so it still has all of the claw marks and gestures, but has become its own thing. There are also fired pieces made from the clay we rehearsed in, I call them empathy objects. All of this work stems from a solo piece I did call Voicings. I wanted to understand what channelling was and I worked with a Shaman while developing the work. 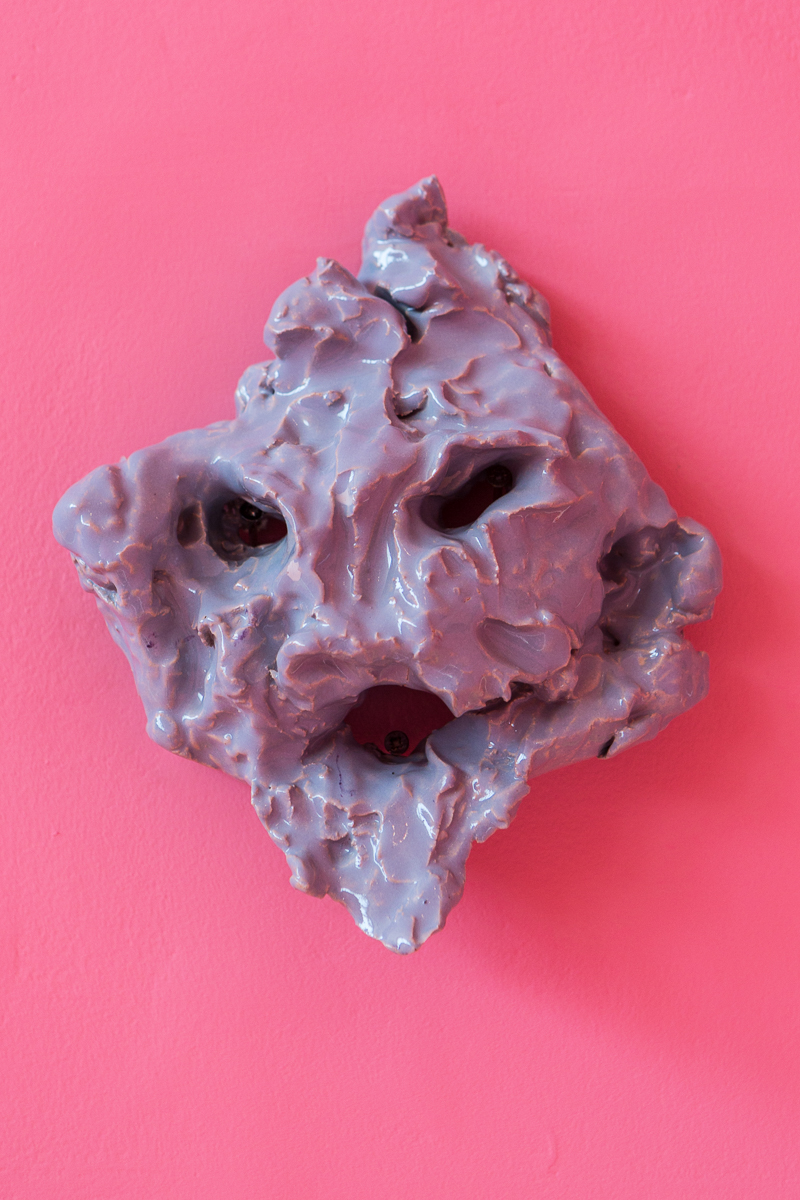 Florence Peake: empathy objects, installation as part of ‘Rite: on this pliant body we slip our Wow!’ at De la Warr Pavilion, 2018 // Courtesy of the artist

RP: Relating to the idea of channelling, could you say that touch for you is a way of accessing some kind of communal energy?

FP: I think touch can be an access point to receive so many different things. It has its own grammar and laws that sit outside the patriarchal structure of visual and verbal language. It is a language that communicates with other people, other bodies and also other fields of consciousness. There is a movement task that I do where you map somebody’s body: eyes closed, you trace the outline like a moving landscape, first with your hands, then with your face. Touch is also about the whole body, we touch but we are also being touched—so it’s a shift in how you perceive yourself and your body. Through touch you get all this perceptual information and suddenly the world becomes a 360° experience.

RP: So the whole subject-object differentiation…

FP: …dissolves! All of that stuff to do with body image, gender, suddenly shifts and we are in a different field. There is an incredible sense of equality, as well as difference, it’s very liberating. 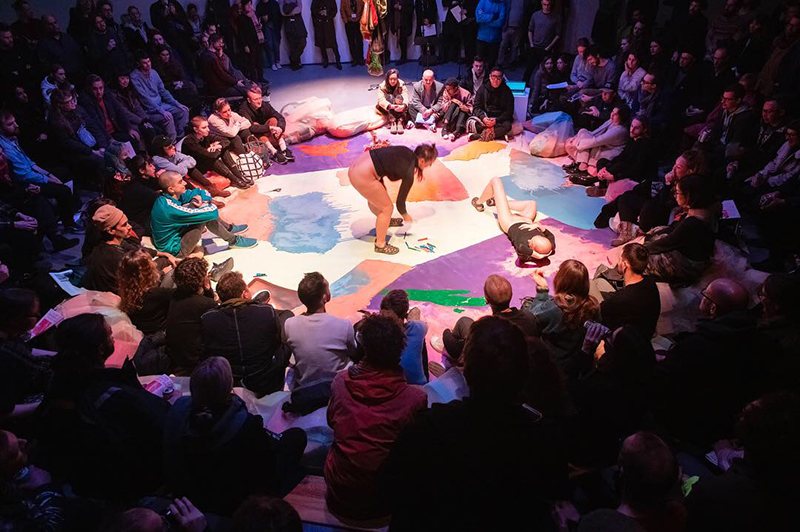 RP: This is a good point to ask you about the performance work that you do with Eve Stainton. 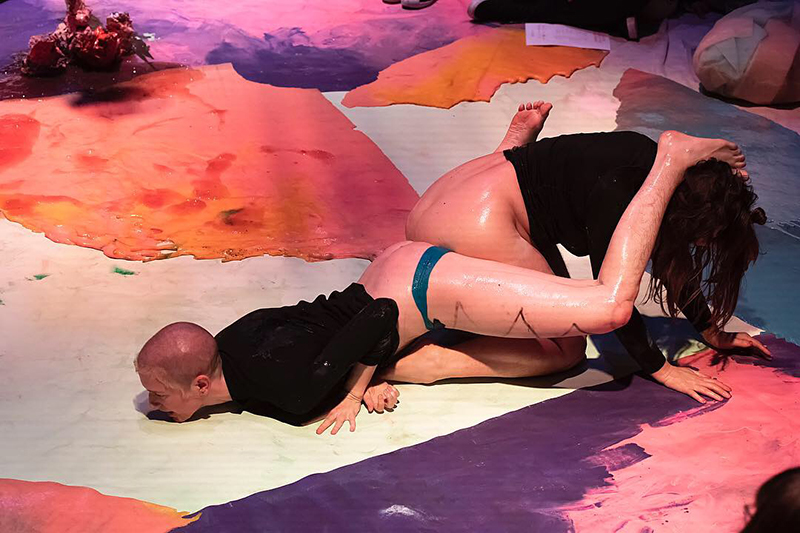 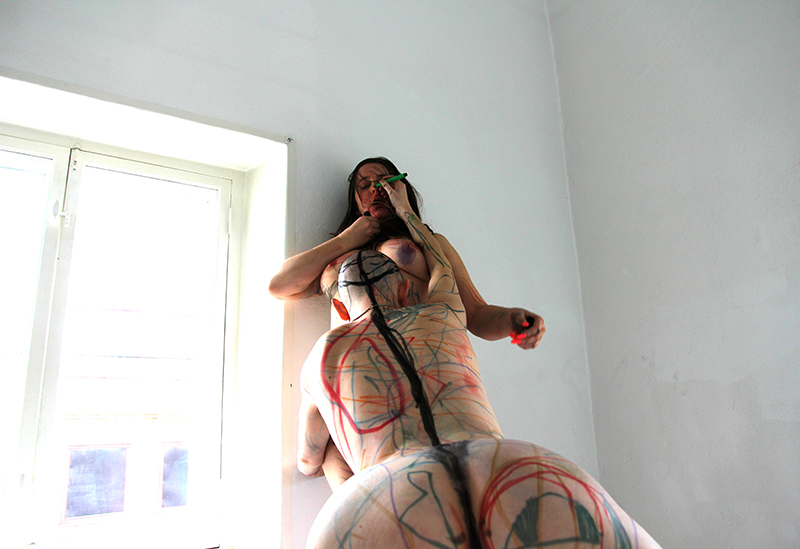 RP: What I really like about your work is that it challenges the cool distance of postmodern discourse: it’s fully embodied and sincere, and although there is humour, you’re not reliant on the scaffolding of irony to make complex work.

FP: Humour is in it but the work can also be really formal. There is a mistake in thinking that maybe the work is not critical of itself, that it’s just me expressing and being cathartic. It’s not that. The decorating of the vulva is a ritual, it’s symbolic in that it opens up a space and it brings the audience into a communal experience. It’s important to acknowledge the intelligence of the body: a pre-linguistic, intuitive knowledge that is held inside us all in some way.

This article is part of our monthly topic of ‘Touch.’ To read more from this topic, click here.