When I visited Christine Sun Kim’s studio, there was a large charcoal drawing on the wall that read “WHY MY HEARING PARENTS SIGN”, above a pie chart she was getting ready to fill in. They’re a response to, in Kim’s words, “people being curious about how things run in my life”. She’s decided to explain it to them. I thought the charts succinctly summarized Kim’s work, which involves sound and communication (with her family, with those curious about her), and also lots of intimacy. There’s the trust involved in allowing someone else to be her American Sign Language (ASL) interpreter or literal “voice” when she gives artist talks, or how and why her partner and baby are learning sign language, or Deaf communities. (And yes, that’s with a capital ‘D,’ used to denote a cultural group, kind of like “French.”). 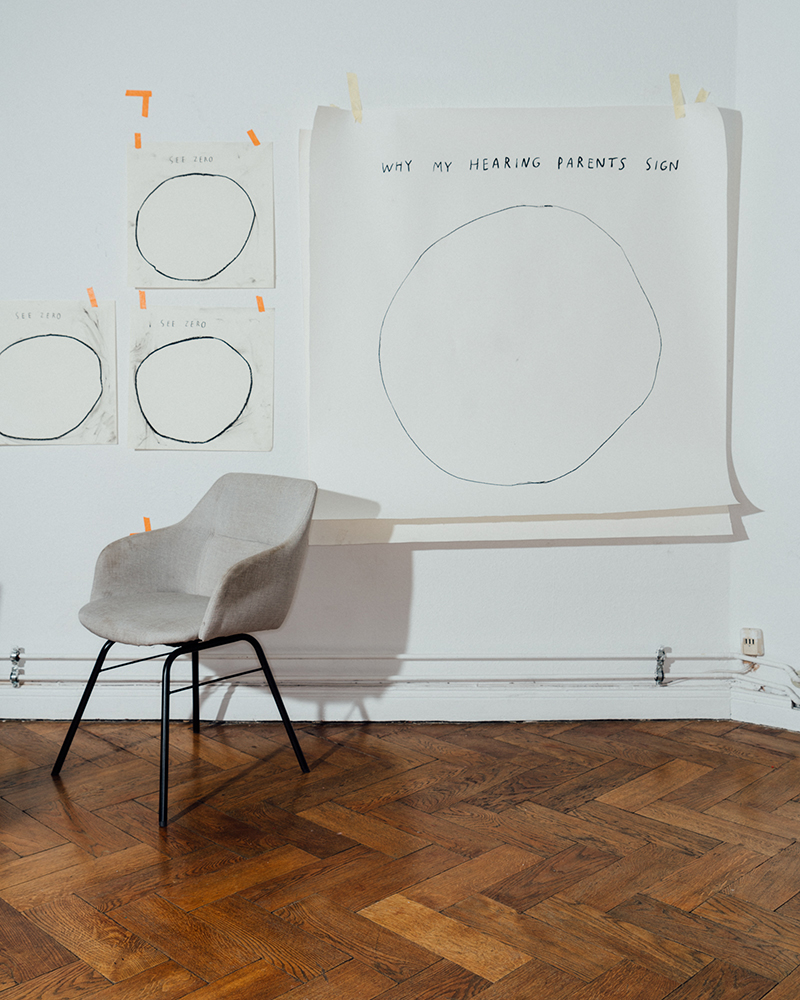 Take her video Classified Digits (2016), currently on view at Albright Knox and made with her partner, Thomas Mader. Mader laces his hands through her armpits in order to sign as if his arms, and the words they signal, were hers; Kim layers the meaning of his gestures with facial expressions. Mader is an ASL learner; Kim was born Deaf. It’s abundantly clear that theirs is a relationship of mutual care and collaboration, and that they “get” each other enough to interpret one another’s gestures.

This idea of “getting” someone enough to communicate with or on behalf of them is a persistent theme in Kim’s art and life, and also when she gives talks. She told me, for instance, that institutions often assume that “one local interpreter can do the job, but I prefer to work with the ones I’ve worked with in the past. They know my practice very well, know how to voice with my personality, etc.” There’s much more to ASL than hand movements: there’s lots of subtlety and personality embedded elsewhere, like in facial expressions. This sort of personal flare is captured in Kim’s recent project Too Much Future, a billboard mounted by the Whitney Museum and recently on view on New York City’s highline. It’s a notation of the ASL sign for “Future,” which, when combined with facial expressions, can include a quantity: hence “too much” future, a nod to how thinking too much about the future prevents one from being content in the present. When translated as a notation, she renders this “muchness” by thickening the line. 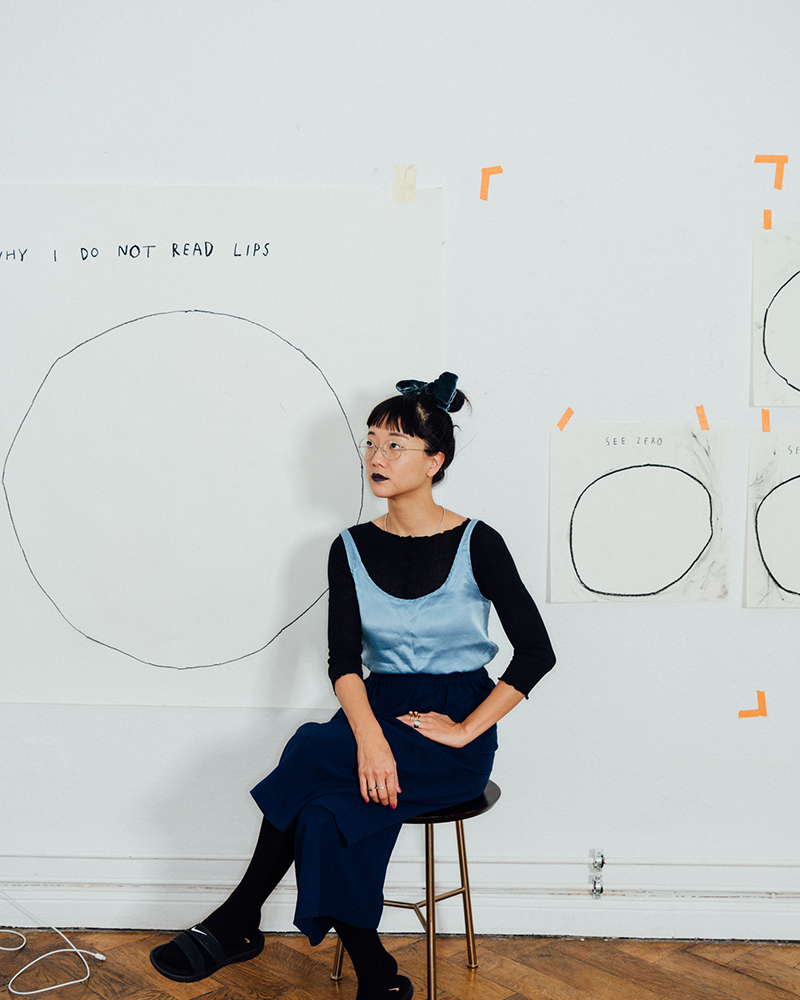 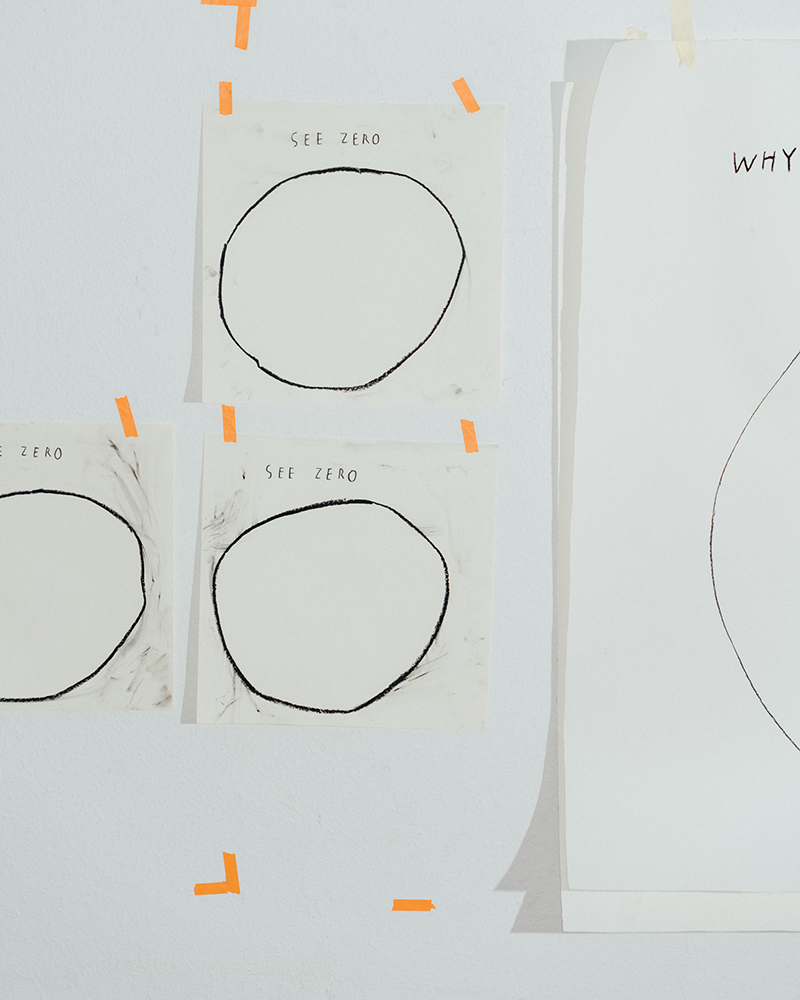 I don’t sign. One high school in my hometown offered ASL courses as an option for “foreign” language requirements for hearing students, but this is still rare, and my school didn’t. So, in the studio, we chatted by typing to one another through a website her friend developed for her that makes text easy to read when casually chatting: orbiting.com. And of course, we communicated through gestures, too. And lots of giggles. Drawings, websites, videos; by now, I hope you’re getting a sense of how Kim’s practice spans many media; also sound and performance and sculpture. “It’s important to me that I keep on utilizing different platforms,” she told me. “It’s similar to working with different voices and interpreters,” meaning that different mediums translate her ideas through different personalities. 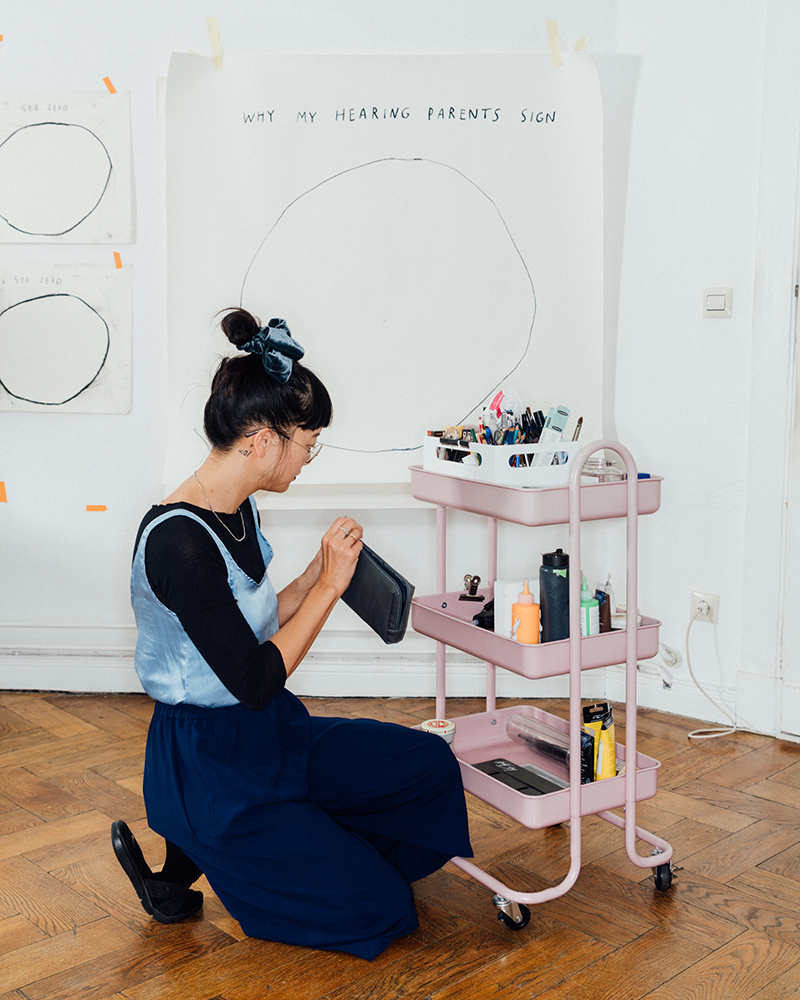 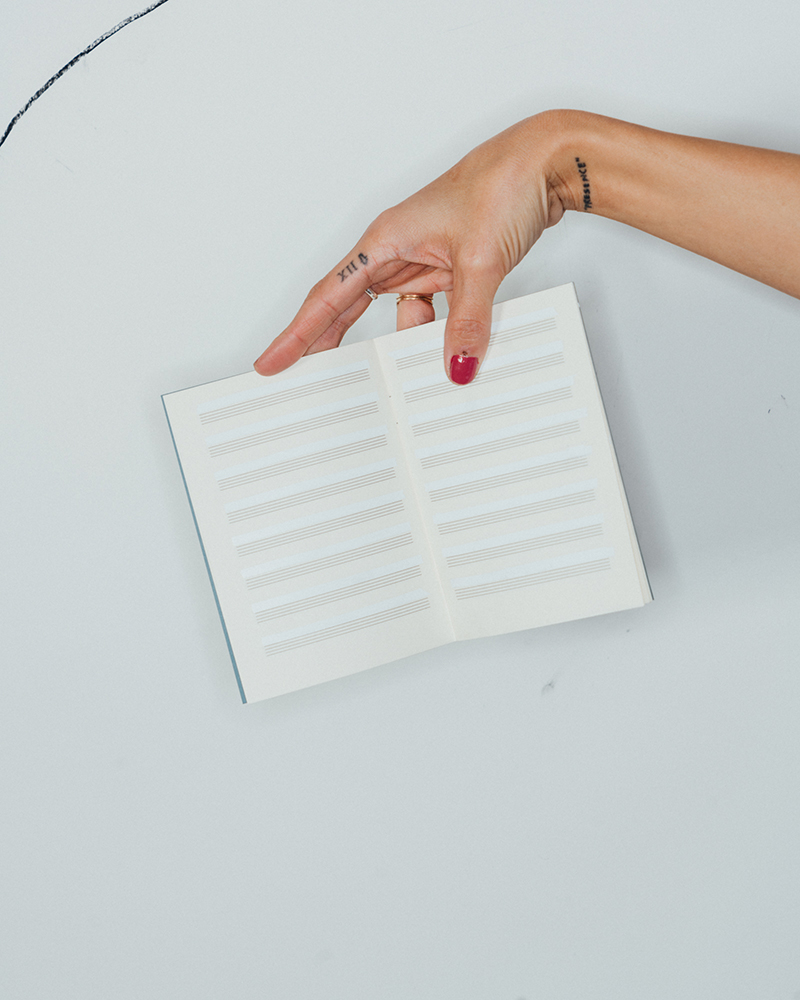 I would dare to bet that the field of sound art is dominated by cis, abled, white men more than any other medium. “Sometimes I feel like I’m always the only woman/Asian/Deaf one in many sound events,” Kim told me. She has an MFA in Sound and Music from Bard College, and often makes work involving some quite technical properties of sound, some of which I’ve come to understand for the first time through her work. Take Prefixed Acoustomatics (2017), which introduced to me the concept of “acoustomatic,” or sound with no visible source. It’s kind of like film theory’s concept of extradiagetic sound. Kim made a set of ceramic sculptures that played with the idea that sound itself is an object. Sometimes, and especially in the field of sound, technical mastery can have the effect of isolating the uninitiated. But Kim neither assumes her audience to have pre-existing knowledge, nor panders to them with simple didacticism. Instead, she makes work the keeps in mind those who might have been made to feel like an “outsider” to the field of sound art. 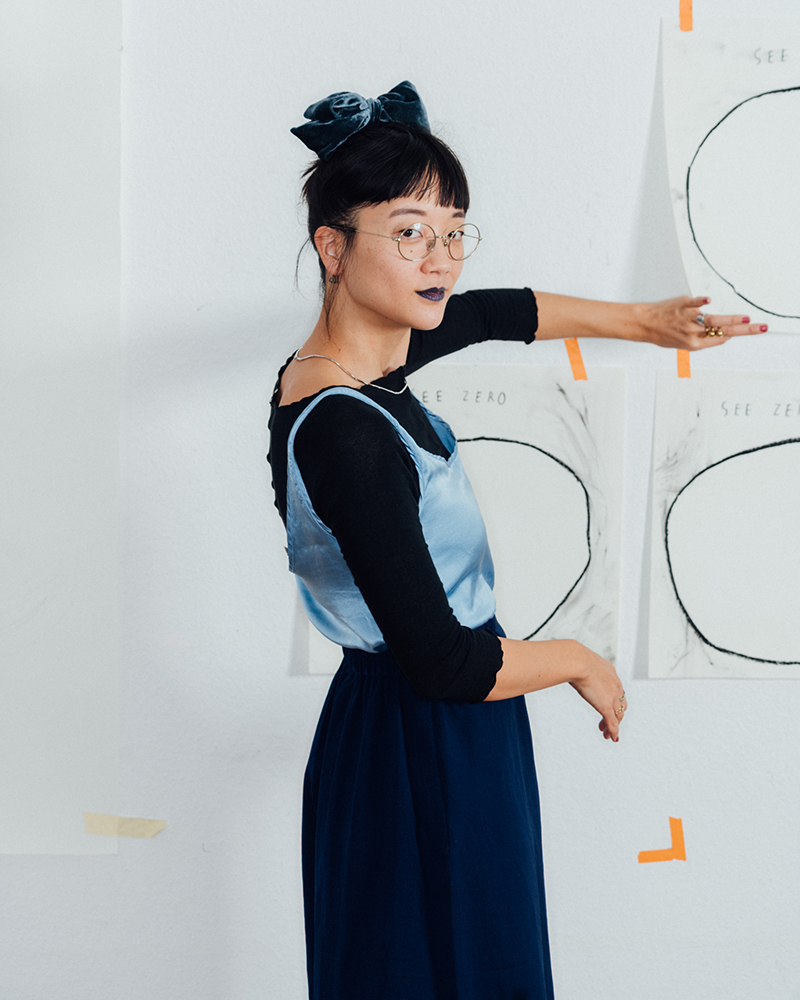 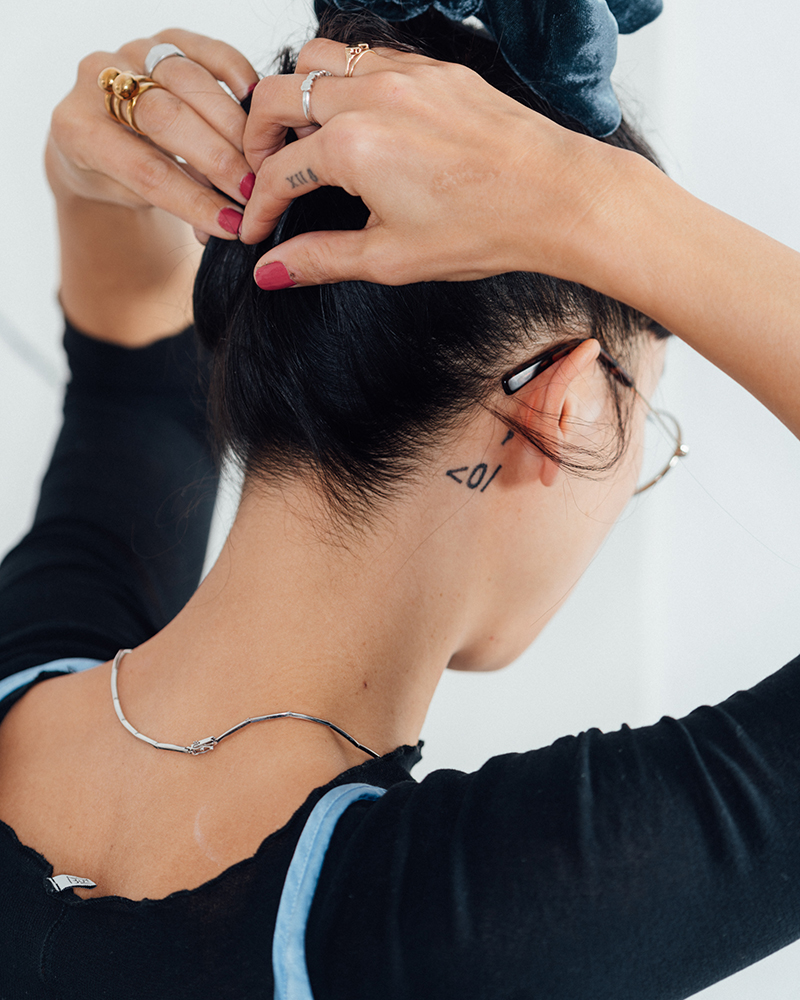 We chatted about how the art world could be more accommodating of Deaf people: much video art, for instance, does not include closed captions when displayed in galleries. Then, there’s money: it’s hard enough for artists to be paid fairly, much less their interpreters, too. Kim says that this is getting better for her; that she used to be asked to split her speaker’s fee with her interpreter’s, a gesture that devalued her work, literally, simply because she required accommodations. “At first negotiating was exhausting,” she recalled, “but I’m starting to enjoy it: asking for the right fee, asking for interpreters, asking for some support in terms of childcare.”

In addition to the pie charts, Kim is currently working on a performance about all the voices that have spoken on her behalf. Catch her show with Thomas Mader, ‘To Point a Naked Finger’, at Albright Knox until April 19th.