The adjective persisting is good for describing something that simply won’t go away. It derives from the Latin sistere, meaning “stand”. One can do a lot with the word “stand” in the context of persistence. You stand by someone, refusing to leave; you stand up for something, refusing to sit down. But more than the word stand is able to do, persisting discloses the enormous effort that comes with the act.

CTM’s ‘Persisting Realities’ exhibition currently on view at Kunstraum Kreuzberg/Bethanien illustrates this predicament. The exhibition’s theme postulates an openness that allows the creation of correlations and parallels between different artistic positions, approaches and visions.

Recurring interests in the shifting understanding of material and bodily experiences within the transition from analogue to digital worlds form a dominant thread throughout the exhibition. This focus particularly manifests in the work of Helena Nikonole, who explores the state of online security and AI, and in Ali M. Demirel’s video installation The Plant, which investigates post-apocalyptic utopias by exploring buildings void of the humans who constructed them.

The show gives further prominence to immediate experience through physical presence. This is felt most strongly in artworks such as Mika Taanila’s cryptic video footage looped and mixed with Mika Vainio’s soundtrack, which results in a hypnotic tension. Or, Luciana Lamothe’s organisation of pipes and plywood stretching from one side of the room to the other. The installation may seem stable and static, yet that impression only lasts until one dares to walk on the wood that bends under one’s weight with each step. Its title, Prueba de Tensión, translates into English as “Stress Test”. A stress test is a procedure to guarantee resistance. Usually taken to the point of breakage, materials are stretched and distorted. In the case of Prueba de Tensión, not only the wooden material has to prove its elasticity, but also the human that enters the uncertainty of the situation. 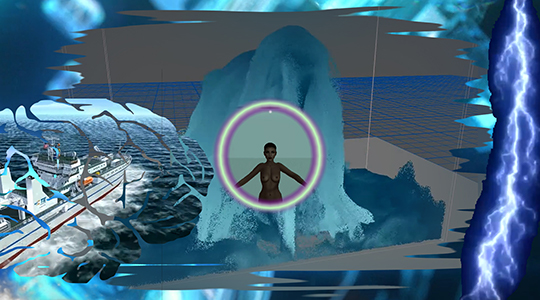 ‘Oratório’ by Vivian Caccuri falls into a similar realm while investigating the cultural interrelation between bass and ritual or cult. The installation’s subwoofers and lit candles create a dialogue of cause and response, manifesting in visual outcomes. The deep bass, rooted in an Ambrosian hymn, makes the flames flicker in correspondence to the strong, regular repeated pattern of the movement that is sound. Caccuri’s interpretation takes bass, rather than the human voice, as a vehicle that functions to collectivise, an entity capable of setting bodies into motion. Here, resonance is not only felt, but seen, developing a point of contact between audible sensation, inaudible vibration and moved matter.

Just as ‘Oratório’ demonstrates sound as an active force, Tabita Rezaire’s Seneb explores how sound can act as a guide towards decolonisation. Seneb, deriving from the ancient Kemetic symbol meaning both “health” and “to be sound”, is about practicing decolonial healing through the technology of sound. Whether wounds are of a physical, emotional or technological nature, the energy center Seneb promises to remember, acknowledge, and free them – imagining ways of transformation and becoming. 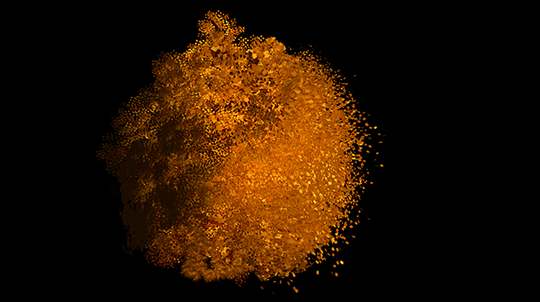 Another insistence on a redistribution of power is uttered in Dorine van Meel’s Phoenix’s Last Song. The piece opens up a space for us to imagine how a new order may arise out of burning the old. We are presented with a glowing, sun-shaped complex of twigs slowly rising from bottom to top. Listening to music by Sami El-Enany, with a voice-over by Emma Bennett, we are told the legend of a paradisiacal bird descending to Earth to die: “My child, my child, you will be born, out of the powder that is my ashes”. The piece proposes a queen-dom, with the possibility of bringing up children outside of normative frameworks propagated by the nuclear family model. It calls on the viewer to imagine a life against a world defined by patriarchal, capitalist and colonial power structures.

Part of this year’s CTM exhibition ‘Persisting Realities’ communicates to its audience the challenge of continuing in a position or action, in spite of difficulty or dissent. As a demand placed upon us, it calls for endurance, for continuously re-negotiating the effects of societal formations. It collates the potentials with the pains of persistence. Most importantly, it asks: how not to become a complacent subject in a world in constant change, but rather to conceive of change through collective effort?