When was the last time you took a moment to close your eyes, breathe in deeply and listen to what is around you? This question is not an unfamiliar one. It is often wielded by those that like to remind us of the constant noise pollution and information-overload that surrounds us. The results? Hypertension coupled with numbness and load-induced blindness. Listening presents itself easily as the cure. Yet, we seem to hardly ever do it right. Beyond the act of hearing, listening is demanding. We need to find and make time to listen. We need to devote ourselves. While hearing can be unintentional and involuntarily, listening is the consciousness-raising act that promises to transform the passive subject into an active and conscious self. As our experiences of music these days are predominantly dependant on the transfer of sound through electricity, in what way are new sound technologies capable of transforming our listening habits?

I met up with Berlin-based composer and media theorist John Connell to speak about the potential of sound as a transformative medium, about mindfulness and listening as self-inquiry.

Johanna Hardt: You write on the impact of new sound media and have been part of several experimental electronic music showcases exploring the relationship between sound, space and perception. A couple of weeks ago you hosted ‘Interiority’, a night-long listening session at MONOM as part of this year’s CTM Festival. Participants came equipped with blankets, ready to experience the overnight performance in its entirety. I remember it as being relaxing and intense at the same time. I felt constantly reminded of where I was in that moment because of the sounds moving through the room. Simultaneously, I felt as though I was drifting off without any center point to rest my focus on.

John Connell: Yes, it is quite a commitment. It is eight hours long, you are there with a bunch of strangers. It’s a balancing act. It is not a concert, in the way that most people expect music to be experienced in. Normally, when you go to a concert, you are there for one or two hours, you are entertained, you absorb, you leave, right? This is really not what the intention of ‘Interiority’ was. It is about defining a space that isn’t there, not to direct people’s experience too much. It needs to be enough, however, to pull their awareness and keep their consciousness stimulated without over-stimulating it. This really changed from last year’s performance at the same location, where there was a clear interplay between sound and light. In ‘Interiority’, what I wanted to articulate was a deeper psychological space that defines its own borders. Within that space I would occasionally drop certain sonic stimuli to trigger a response. Those responses will, of course, be different for different people, but the sounds were more defined and more precise compared to last year.

JH: What kind of sounds formed the basis of your compositions during the event?

JC: ‘Interiority’ was almost completely improvised. I used a modular synthesis set-up with three of four synth voices that I mixed and integrated with other samples and some pre-recorded sequences. I was jumping between this and Ableton. The beauty of this is that it is so expansive; at the same time, it is quite challenging to keep this consistent over an entire night.

JH: MONOM is equipped with the spatial sound instrument built by 4DSOUND, the collective you are part of. How did you make use of this technology during your performance?

JC: 4DSOUND explores spatial sound as a medium and an experience. It is very exploratory in that sense. The team does not make the speakers, but develops the software platform to define the matrix of the speakers. Over the last six years they experimented with different types of performances, listening sessions and multi-media installations. All the speakers are echi-distant to each other. In MONOM, there are additional subs under the metallic grid on the floor. There is a lot to be said about these omni-directional speakers. It is a very flat response. In a sense, it results in a much more neutral output, compared to how directional speakers are usually designed. This gives you a blank canvas to work with—to explore different kind of interactions with sound. 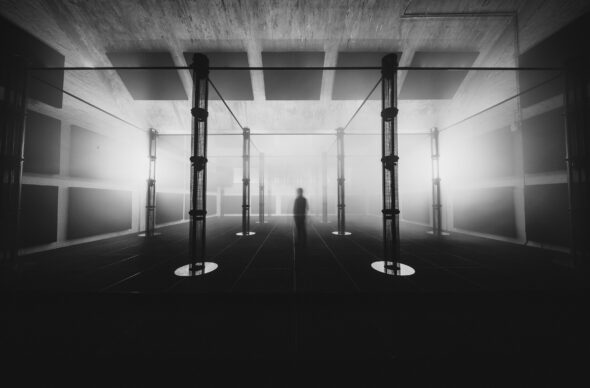 JH: So instead of approaching them as speakers, you deeply integrate the technology as a tool for spatialisation into your composition?

JC: Yes, as a performer they just don’t work at the level of speakers. The interface works much more at the level of objects. You are working with the matrix in an animator through which you are able to position the sounds either within the space or outside the space. We are thinking of it as an unlimited spatial field, because it allows you to play with a sense of depth that encourages you to go beyond the actual limitations of the actual physical space. When you stop thinking about the speakers and start thinking about the objects interacting with the space, it becomes a much richer and multi-dimensional experience. You are not thinking about linear compositions you do when you work with stereo. You start thinking more from the perspective of a theatre director with objects inhabiting the space all taking on particular shapes and behaviours, interacting as they move around. Or you can think from the perspective of an architect designing a physical space, where blocks of sound represent certain sensory experiences.

JH: You can direct which sounds go where?

JC: Yes, it is an extremely open-ended interface. There is a size, shape and a behaviour to a sound. There is a path of its movement through the space: a straight line for example, or a zigzag, or something more unpredictable, like a drunken or shaken modulation. When you DJ, you think of basic things like left and right through volume. Working with a spatial system, you think about dimensionality. Let’s think of a car in a street soundscape: it has a very particular shape and size. In a spatial system you can actually define it.

JH: How did you become involved with 4DSOUND?

JC: I’m very interested in the transformative potential of sound. My whole journey with this project and also with 4DSOUND started when I was teaching meditation. I studied different schools of meditation quite intensively and started integrating ambient compositions into workshops. And, with the 4D guys, it was instantly clear that the spatial aspect would complete this area of inquiry. I worked a lot in commercial media before, which is very far removed from what we are doing now. But I have a long-lasting interest in what we mean by media, especially how media influences our ideas and perceptions. A lot of how we have been experiencing this is not visible to us, not conscious. We are not fully aware of the impact that this kind of globalised mediascape has on how we think, feel and how we interact and communicate. Part of what we want to do is to unpack this through the lens of listening. When you just stop and try to let the other senses fade, things start to surface and this takes time and practice.

JH: This seems to link back to your decision not to have any visuals. Can you expand on the reasons to leave your listeners in the dark?

JC: In the absence of any visual stimulus, things begin to emerge over time. Maybe you have to fall asleep once or twice and then things begin to come up, which makes you want to label and define them. We were developing a new stream of research in the Budapest facility called Spatial Memetics. We became interested in the potential of spatial sound as a starting point for a kind of language that transcends specific sensory boundaries. Especially now that immersive media started to mature as a discipline. Since there seems no consistent language, we became increasingly interested in the potential of using sound as a syntactic building block. So, if I use a particular shape of sound in this particular location, does it consistently trigger a mental image or physical sensation in the listener? ‘Interiority’ was a part of these explorations, as we were using specific sounds merged with clearly recognisable soundscapes that people had submitted such as vocal samples and voice recordings from an iPhone.

JH: However these endeavours remain non-didactic, because, as you said, you don’t demand one specific kind of experience from your listeners. How do you define the potentials of immersive sonic media with respect to the direction of attention?

JC: There is an immersive media boom with huge amounts of money being pumped into immersive media, predominantly into visual media. When you think about it from the perspective of refining the capacity to perceive things and the potential for improving the quality of our communication, this is not what those media are designed to do. They are designed to hold your attention and keep it for as long as possible and for this dynamic there are many commercial opportunities for different interested parties. If you step away from this and think about alternative potentials of immersive media, there is a completely different universe that we can explore, which is less about holding and directing someone’s attention, but rather about providing them with the space to explore their own capacity to perceive things. You can see this consistently in meditative projects and also in the community that surrounds the 4D project. People’s interests start to change; the type of experience they seek out starts to shift. I mean not even only regarding 4DSOUND, something is happening around durational media: it’s multi-narrative based, it’s not directory and this is what we are interested in exploring, where this is going in 10 or 20 years.