Singular authority figures no longer dictate truth: networks of our own peers have taken their place. Facts and counterfacts look identical. Fake news becomes the defining characteristic of our current times, misinformation a social condition. We, as consumers, become increasingly hesitant about respecting or accepting propositions that are given to us. 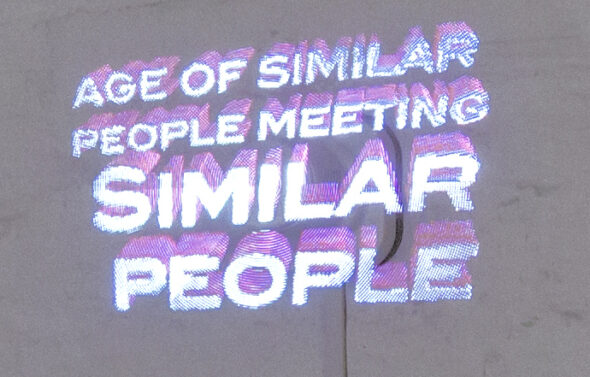 ‘Part II’ at Aperto Raum presents works that engage with this condition or state of doubt. Bringing together works by Anders Ehlin, Lucas Gutierrez and Protey Temen, the exhibition centres us as consumers. How do we move about in environments of uncertainty marked by language, sound and images? How do we cope with feelings of doubt constantly questioning the veracity of information?

Climbing down the narrow stairs into the underground exhibition space, you adjust your eyes to the dim light already immersed into the sounds of Bend To My Will by Anders Ehlin. Its copper plate is swinging, brought into motion by a linear actuator. It changes its shape and, with it, its harmonies. The resulting feedback loop continuously gets louder as the resonance starts to build up. You start to move around in relation to the peaks of resonance. Engraved on the plate’s surface are the words “Lorem Ipsum” the common placeholder text used to visualise content in a document. Lorem Ipsum originally stems from a Latin text by Cicero, with words altered and removed or added to it. Along with the material it is engraved on, copper, as an original material of printing technology, the piece is a visual and sonic manifestation of how meaning can shift and bend, taking on a life of its own. 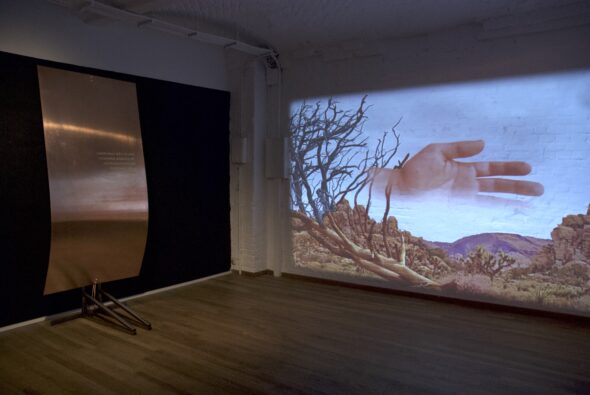 Right next to it, Arena of Probability by Protey Temen is projected onto the wall, occasionally mirrored back to us by the surface of Bend To My Will‘s copper plate. The Arena of Probability has three main protagonists, signalling the effects of the sensory experience of absence: probably, maybe, almost. These three doubtful words describe a lack of information. In Arena of Probability a hand moves across a map shot from above, moving it as if interacting with a touch-screen. From “probably” to “maybe” to “almost”. Spoken in succession they seem to move closer to truth. However, they never fully reach it. This feeling of evasiveness stems from the artist’s personal experience during his visit to Joshua Tree, the national park in California, where two distinct desert ecosystems come together. For the first time, Temen felt nothingness manifest as a physical feeling. 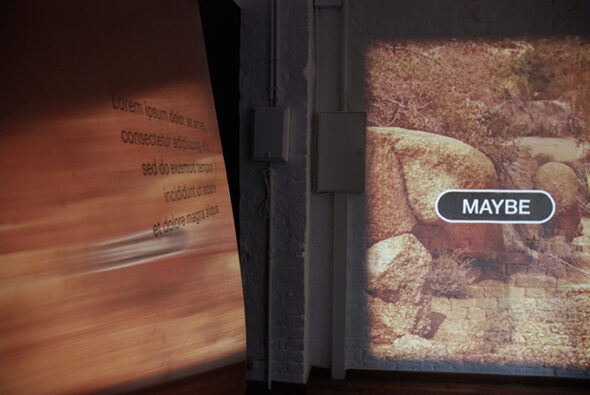 “Age of Similar People Meeting Similar People”; “Robots doing nothing”; “Police for Algorithm”. Language again is being contested in Lucas Gutierrez’s Content Indifference. The holographic effects on LED fans are producing flickering slogans: their language quoting current social fears and dystopias mixes with a language of colourful and chaotic metaphysics. On a loop, these neon visualisations are dazzling. Moving from side to side the fan creates 3D images that never come to a rest. Reminiscent of TV or screen projections, the fan-displays materialise feelings of over-saturation by digital media.

In ‘Part II’, a void—as the philosophical concept of nothingness—is more than just a contradiction that problematises the relationship between matter and space. It is something that is felt, creating uncertain realities for consumers of contemporary digital media. The exhibition makes visible and audible how systems of language, visual codes and sonic stimuli work together in the production of doubt through absence. 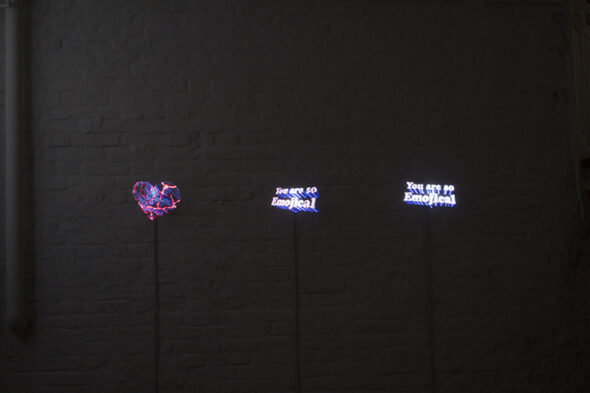