Pollen, grains, fungal spores, animal tissue and several other microorganisms are the co-agents of Alma Heikkilä’s works, currently on display at The Museum of Contemporary Art Kiasma in Helsinki, Finland. Focussing specifically on processes that remain invisible and therefore often inaccessible to common human perception, Heikkilä’s works reject the privileging of human existence over the existence of other nonhuman bodies. 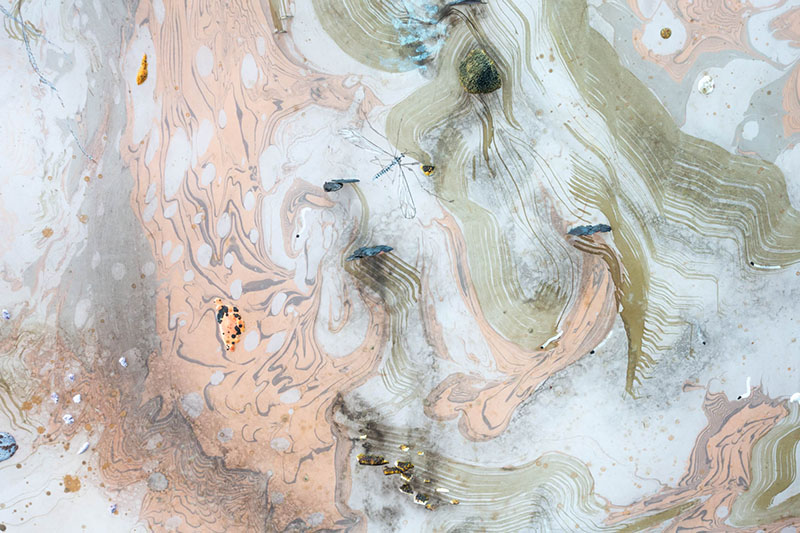 Her paintings bring forward the understanding of the human perception of nature as always being predetermined and therefore limited by our own physicality. We cannot make out the relationship between the trees, see the air that moves between them. We cannot witness the processes that are happening just underneath our soles as they touch the ground. While too tiny to be seen by the naked human eye, microbes enclose and inhabit us; they can be found in soil, water, in air and in our bodies. While some of these forms of life make us sick, others are vital to our health. 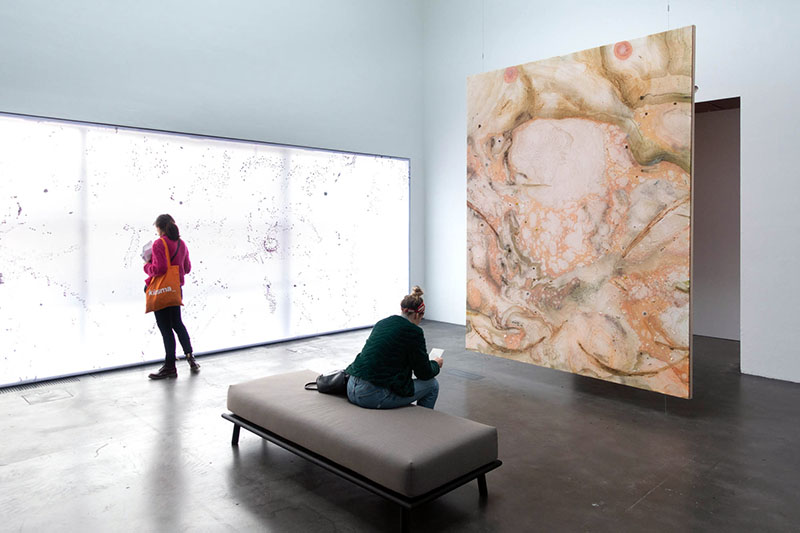 Heikkilä’s paintings invite us to come closer, to adjust our eyes to the tiny elements that start to appear in the layers of paint and other materials. Slowness is what her paintings require. Becoming more attentive to detail is what they demand. In soil – minerals mixing with the living a dark brownish, mud-like colour dominates the canvas. Looking closer, we discover all the different pigments that make up the entire composition, following the lines and swirls left by some kind of worm-like creature. in the air – into the lungs spans across the entire window of the exhibition space. Instead of being subject to the usual harsh, artificial spotlight prominent in so many museums and galleries, the only light controlling the exhibition, and the condition in which the artworks will be seen, is the light coming in from outside. Against a lit background we make out tiny dark particles. Somehow, it is as if we look outside the window, seeing the air and all that which it is host to. Hanging from the ceiling is another piece, warm and moist – decaying wood. Though its colours point towards some humans’ flesh, the structures visible on the painting’s surface are reminiscent of the surface of a tree stub, which is at once deadwood and biotope, generating fruitful ground for insects, mushrooms and other species. 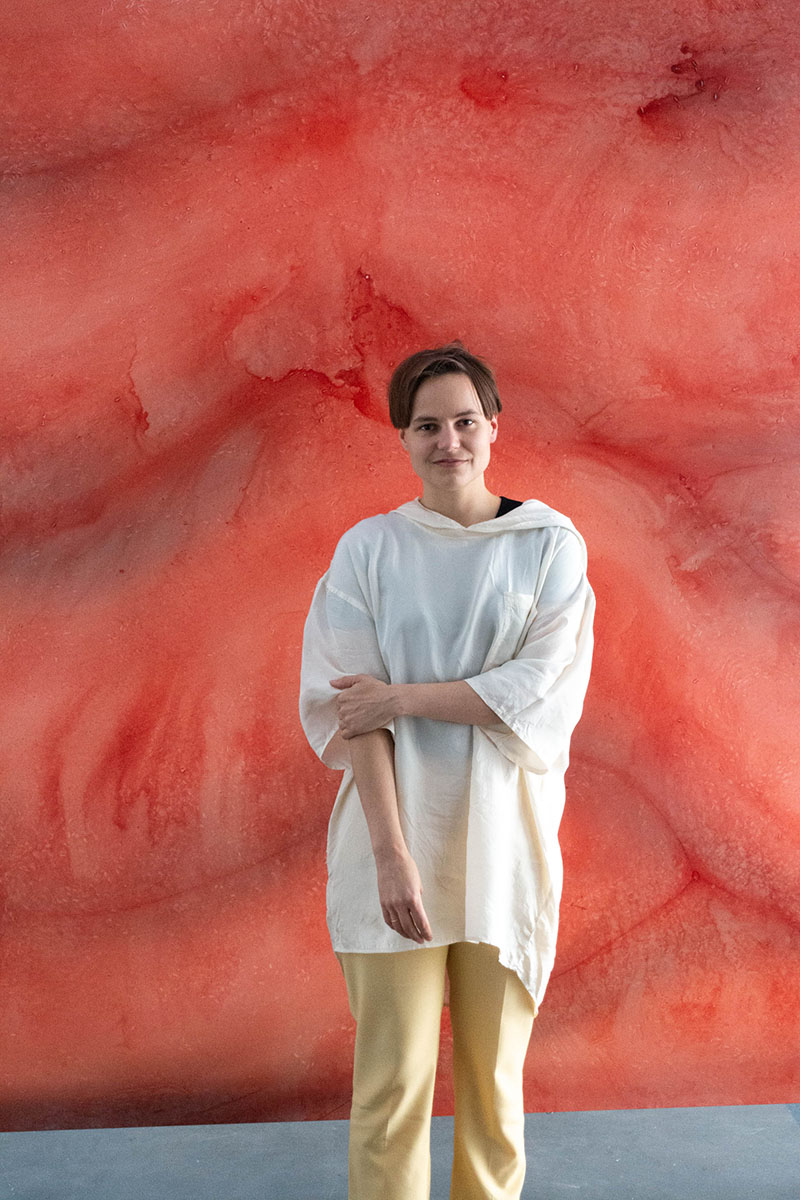 This tendency of interdependence and collaboration is mirrored in the way Heikkilä works. The materials have their own autonomy, their own will that cannot be controlled by the artists as single author. Water and pigment decide how the paint will spread on the canvas, which paths it will take and where it decides to coalesce. The materials that Heikkilä uses are not resources but co-agents in the creation of the work. Collaboration between different bodies and their experiences takes further shape in the exhibition with the anatomy workshop presented by dramaturge Elina Minn. Her anatomical exercises for the audience focus on breathing, touching and the relationship between bodies and the workshop fosters what can be described as an embodied knowledge production. This special emphasis on experience and materiality demonstrates a clear move away from knowledge production that is entirely bound to linguistics. 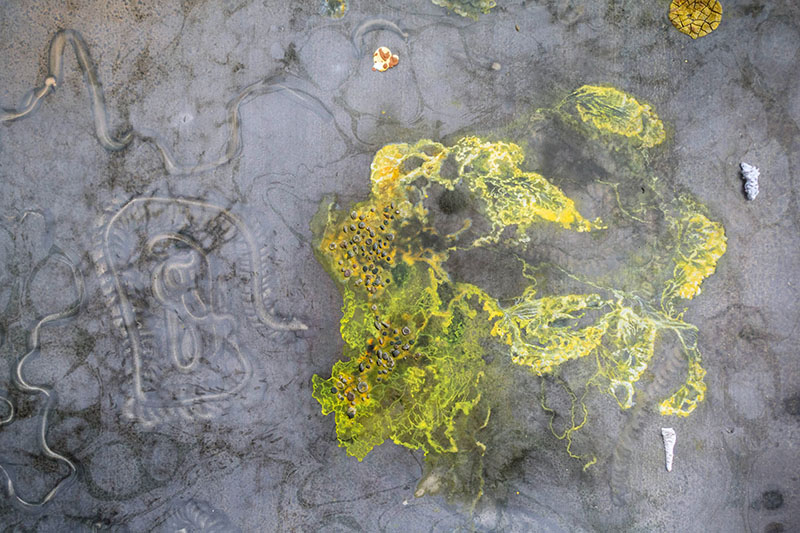 Focussing on the relationship between what we consider human versus non-human, the exhibition illustrates the potential of becoming more attentive towards the elusive reality of microorganisms and other non-human elements. The ideal of unity that abolishes the very idea of the word ‘surrounding’ and replaces it with ‘amongst’ takes shape when we wander through her exhibition. Next to the works that stretch from one wall to another, across an entire window, or hanging from the middle of the ceiling, one can only feel small and somewhat insignificant, yet eager to take it all in. Her paintings function more like an installation, dividing the room and creating their own structure. Despite being individual art pieces, they form a dialogue, interacting with one another, ultimately inviting the human to join in.

Alma Heikkilä’s exhibition shapes knowledge on ecological issues by drawing attention to what the Earth wants. Her work demands that the viewer get closer and dig deeper. It fosters an engagement with the impact of climate change as a joint effort, demonstrating that we are nothing more but also nothing less than one among many other species.