Through sculpture, installation and painting, Brooklyn-based artist Elizabeth Jaeger negotiates the relationship between the viewer, their bodily presence and their consciousness. This immediacy that her figurative sculptures possess is felt strongly in works such as 6:30 (2014), where dogs’ eyes fixate on you in a way that makes it hard not to return their gaze and in Serving Vessels (2013), where eyes of similar yet more haunting intensity target you, all the while challenging the structures of gendered looking by confronting the traditional male gaze. Here, a woman lounges naked on top of a glass shelf. One arm bends to support her relaxed position, the other reaches towards her knee, her hand gently placed on top. Her head is turned towards you. Underneath her, two rows of small vessels in different shapes take on the same dark colour as the woman’s body. Her pose mimics Western depictions of the naked female form, in the shape of a reclining female nude. Yet, we find an expression in the woman’s face that challenges this tradition. 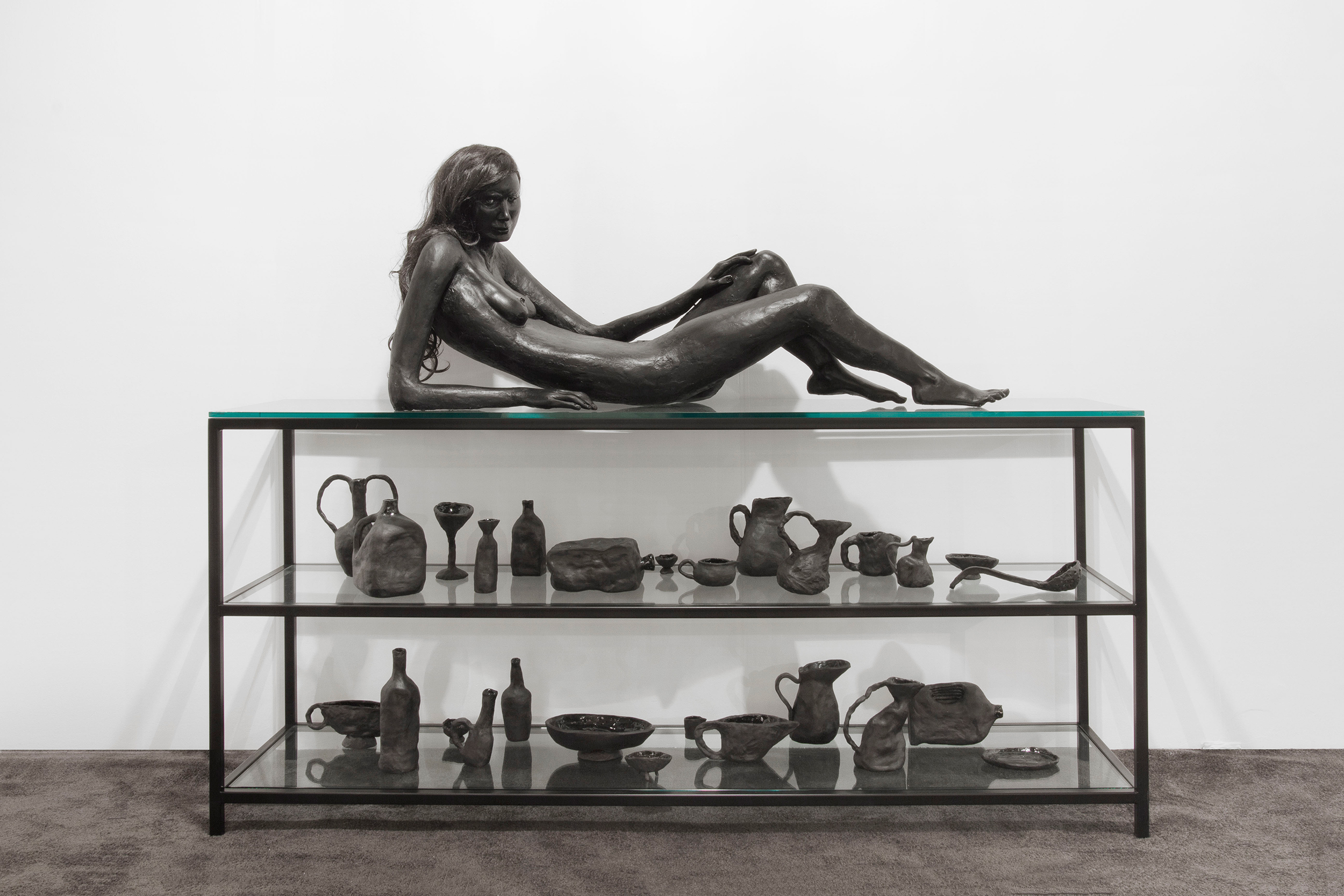 Her series of female ceramic torsos (2017) carries on from this in an interesting way. As more concretely made objects, the torsos have been described as merely allusive to the female body. Yet, they appear to be directly linked, making us aware of how the ideal Western female body has been constructed and dominates our perception to this day.

Having exhibited at institutions such as The Whitney Museum of American Art and MoMA PS1, Jaeger will have her solo debut in Berlin on the occasion of Gallery Weekend at Klemm’s, whose roster she joined this year. Her exhibition, ‘Brine’, will present a series of transparent glass fish that dangle upside down from steel structures. 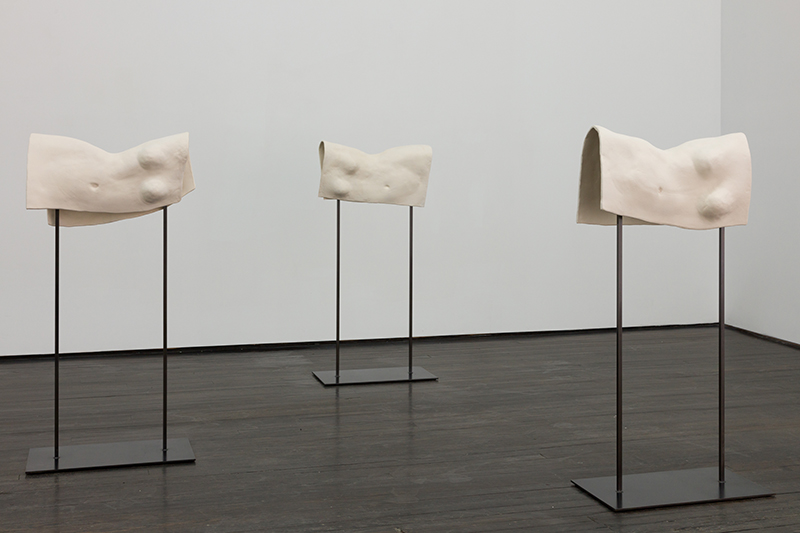 Johanna Hardt: Klemm’s Gallery will present a new body of your works for Gallery Weekend. Can you tell us about the development of this series of sculptures?

Elizabeth Jaeger: This series of blown glass sculptures is based on the idea of lachrimonies and inspired by Roman fish vessels from the 2nd century BC. There’s one held in the Metropolitan Museum of Art and another at the British Museum that I’ve been studying specifically – they were found apart, are different sizes and shapes, but are blown from the same mould. I like this idea of early industrialization, without standardization.

JH: In what way does this new body of work continue your interest in the relationship between a vessel and a body?

The vessels connect to the (human) body through the metal stands, and their relationship to the viewer. Lachrimonies are vessels to hold tears. Mourning people would cry into them, cap them with cork and symbolically be ready to move forward with their lives once the liquid evaporated.

I like the idea of a fish vessel, an animal hollowed out, filled with a saline solution from another: it’s like turning a fish inside out. The stands, while accommodating to the human body, are also loosely based off traditional fish drying racks. I was attracted to the brittle stillness of these structures, in opposition to the fluidity of animals, which they transform. Fish in the ocean are never still. 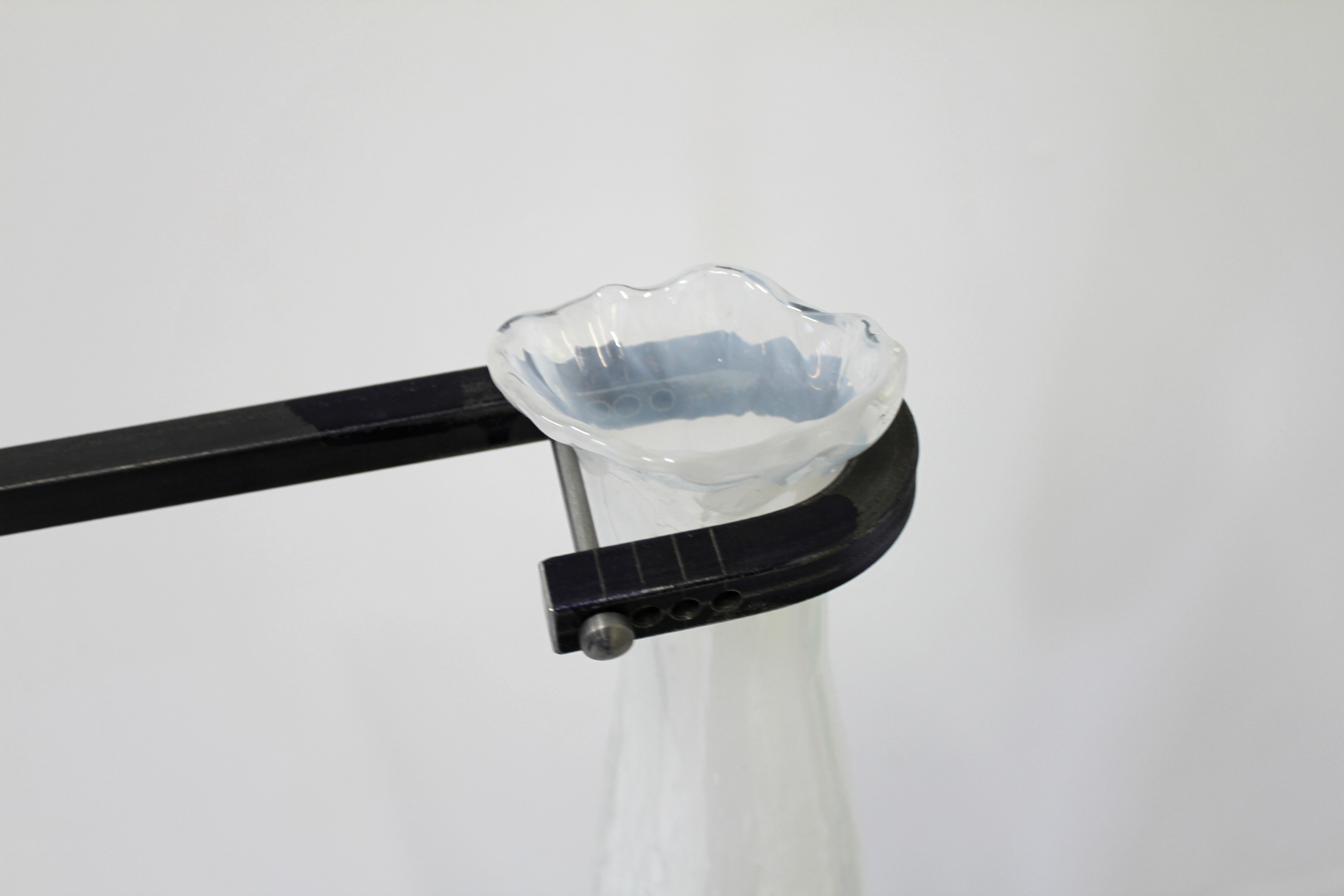 JH: You mention hollowness and this is exactly what, for me, a vessel is always connected to. A void of some sort, a lack, a negative space that needs to be filled. Is this something your work specifically seeks to address?

EJ: Yes. I think a lot about emptiness. While making the fish vessels I had this recurring memory of fishing with my grandfather in California, and having to gut the fish. We were sitting on the edge of a rock sunbathing as he handed me dead fish he had cut open. I remember it struck me how easily their entrails fell from the open cavity, as if the fish were made to be containers. And the violence of this: how empty they felt, while ready to cook and eat. I’ve also been thinking about the desolate nature of the oceans. How places that I used to swim as a child, with thousands of tropical fish, are now vacant, bleached, with the occasional ghostly piece of plastic floating by.

JH: This is very interesting; how you describe the actual process of emptying out a body, whether this is a body of a fish or a body of water, like the ocean. It connects emptiness to the idea of utility as something that describes someone or something as being useful, profitable or beneficial.

EJ: The idea of utility is one that I associate with depletion; overuse. We see depletion everywhere, as a direct cause of our entitlement to use. There has to be another way to coexist with each other, and with the nature around us. I mourn the depletion of people and nature. 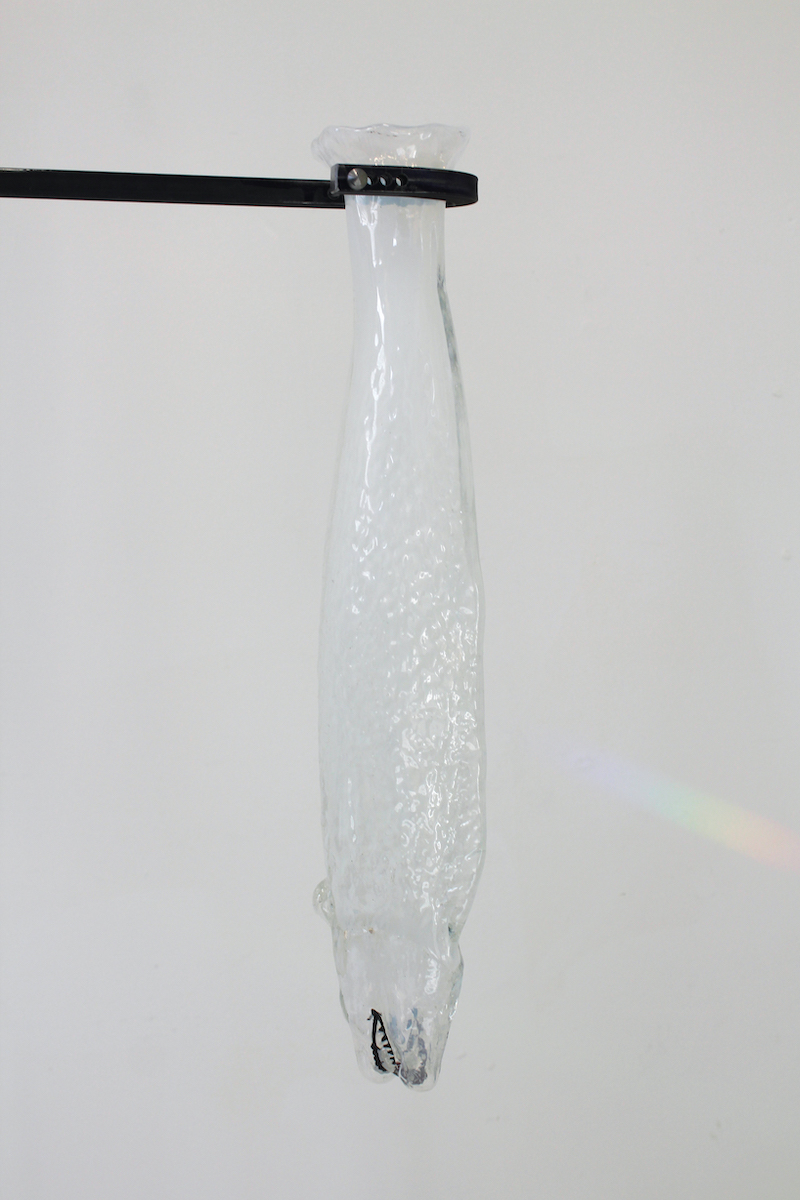 JH: How are you approaching the gallery room as a space for representation? In general, but also in particular with your new sculptural series?

EJ: I approach the gallery as a sort of stage where sculpture can tell a story and interact with visitors as a quasi prop, while also considering how people move through the space and their relationship to it. Galleries aren’t truly liminal, they hold the memory of every previous exhibition and have a specific architecture that people relate to innately. I try to reorient the viewer in the space with the work.

At Klemm’s, the columns play a big part in my layout of the show. Columns have the capacity to hide and, thus, reveal objects. These ones also cut the space in half, creating a volume of a back area that I am interested in playing with. 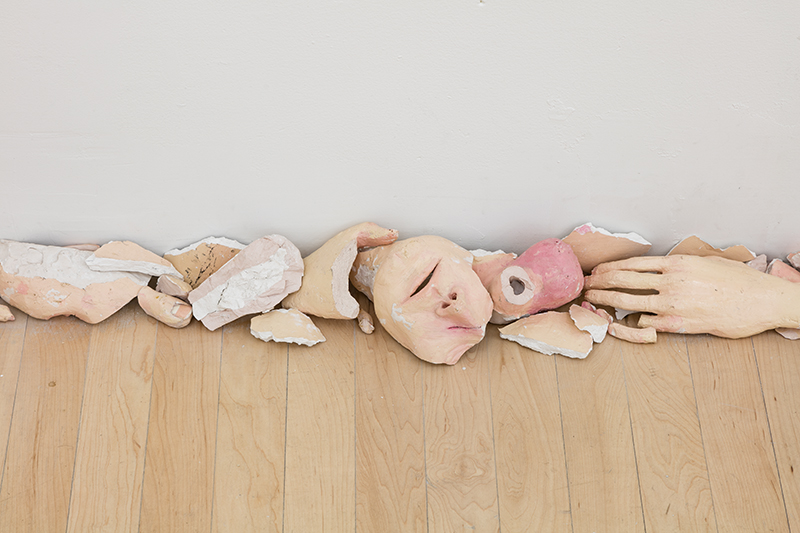 JH: Your solo show ‘Hours’ just finished at Jack Hanley Gallery in New York. For this series of silk paintings you focused on the experience of the people you painted, making their feelings part of the work itself. Can you speak about your interest in the durational aspect of portraiture?

EJ: I was interested in portraiture as a means to be intimate with strangers, acquaintances and friends for a long period of time. Portraiture is a “productive” activity that makes people feel at ease and takes pressure off of the conversation. My studio became a space where there were no distractions, just time between two people; the conversation and rendering that came from this focus.

JH: Together with your childhood friend, photographer Sam Cate-Gumpert, you are running the publishing imprint Peradam. How does this practice of publishing—the process of making a book—relate to your practice of making sculptures?

EJ: There are occasions where the work we are publishing relates directly to my sculptures, such as with our recent edition Denude with my last solo show, ‘Pommel’, but generally Peradam is a project that revolves directly around the published artist’s practice, unrelated to my own.