<Interrupted =“Cyfem and Queer>, Creamcake’s second experimental symposium on cyber- and technofeminist thought, took place a couple of weeks ago at Berlin’s aquarium and Südblock, two community-run spaces next door to one another in Kreuzberg. While their inaugural assembly in 2018 focussed on the foundations of cyber- and technofeminist thinking, reflecting on the history and legacy of cyberfeminism, their second string of dynamic events revolved more specifically around biotechnological and political management of bodies, sex and gender in the digital world. Through workshops, lectures, performances and art installations, Interrupted opened up a space that continues to forge new patterns for interrogating technologies from a queer, feminist and decolonial perspective. 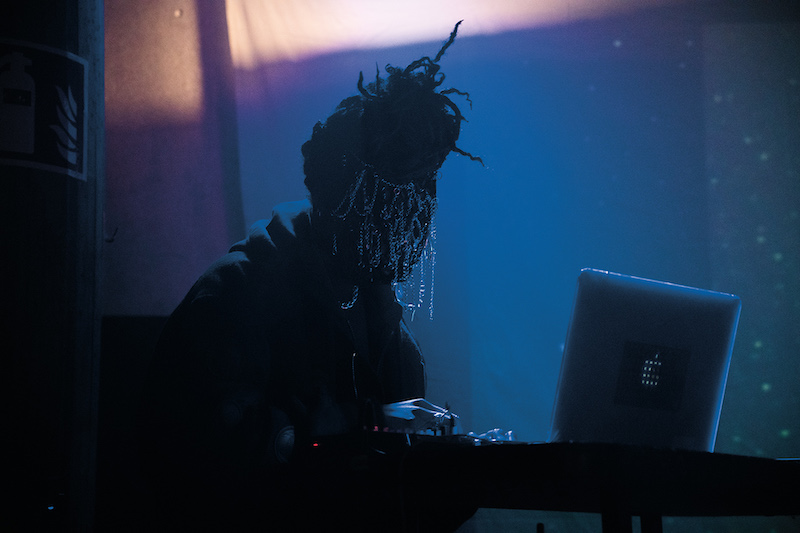 Wary of universal definitions, Interrupted practices a cyberfeminism that places particular importance on its mutability and openness to change and hospitality to difference. With around 26 contributions Interrupted leaves you with an understanding of cyberfeminism as a hybrid term—the offspring of two distinct varieties so to speak—that remains open and malleable to different artistic, scientific, technological and political implications. Curated by Creamcake’s Daniela Seitz and Anja Weigl, and Gala Rexer, the symposium was moderated by Ina Holev and brought together an array of local and translocal feminist and queer individuals and groups, including Fallon Mayanja, Gucci Chunk, Bassem Saad, Marija Bozinovska Jones, Lori Baldwin, Lina Bonde and Zülfukar Cetin. Opening up a space for exploring how technologies, identity, sex and the body interrelate, the night and day series of events built alliances across both geographical and generational borders.

Many of Interrupted‘s voices stressed the relevance of accounting for where you are speaking from. Diana McCarty, self-proclaimed reformed cyber-punk, for example, mentioned recent criticism regarding xenofeminism. McCarty referenced the artist and researcher Annie Goh’s racial critique with regard to xeno-feminism as a politics for alienation. Goh questioned resonances between the feminist text and far right delirium, through critically examining the prefix “xeno” as a stand-in for “alien”. “Who is the ‘we’ who XFM speak from/about? It seems to imply that “we” are somehow all equally alienated.” This argument has further been taken up by Sophie a. Lewis, who agrees that in a time when women’s rights are mobilised by racist, xenophobic and Islamophobic rhetorics, such points of contact cannot be left unchallenged.

Indiana Seresins video The Reproduction of the Future: Shulamith Firestone and Octavia E. Butler looked at the poor handling of race in the case of Shulamith Firestone’s vision of the future of reproduction. Her The Dialectic of Sex: The Case for Feminist Revolution from 1970 was reissued by Verso in 2015, indicating a renewed scholarly interest in her work of thought. What do cyberfeminists and xenofeminists today take from the author who hailed artificial wombs and other reproductive technologies? Firestone sees the end goal of feminism in the elimination of the sex distinction between man and women, whose genital difference should not matter culturally anymore. Artificial reproduction holds the potency to bear children to both sexes equally, or even independently of them. The division of labor (and labor altogether) would be ended through cybernetics. Women would be freed from biological impositions and patriarchal oppression. At the same time, Firestone issues patriarchy as a form of “privileged slavery”, identifying races as parents and siblings of the Family of Man, further defining racism as an extension of sexism. Through a comparison to Octavia Butler’s Bloodchild (1984), which presents a view of the ethics of reproduction, Seresins attacked the biologism and racism in Firestone’s Dialectic of Sex, in particular, and the extent to which feminism has been (and continues to be) intertwined with the project of white supremacy in general. Going beyond Donna Harraway’s “Make kin not babies”, she finishes with suggesting to stop making white babies altogether – to stop reproducing whiteness! 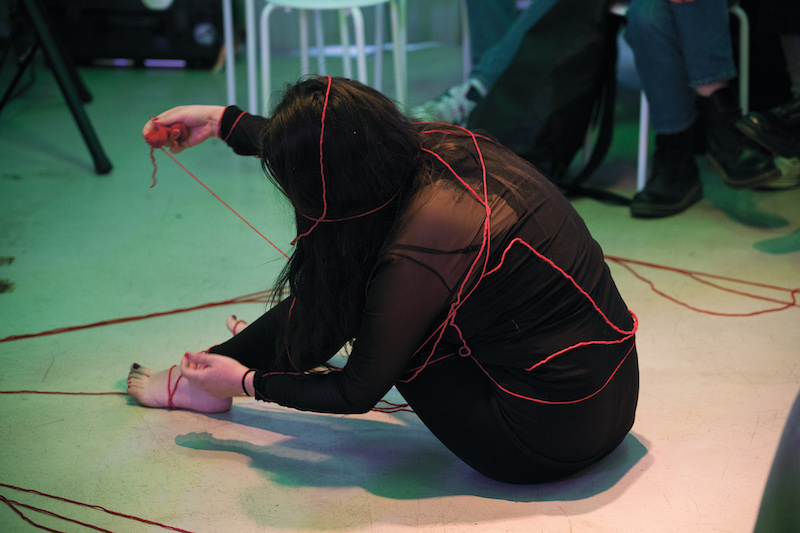 Epistemological whiteness was further challenged in Tiara Roxanne’s performance ‘Indigenous Body, Indigenous Borders: A Digital Disruption’, which investigated the relationship between the Indigenous Body and AI. In front of us, Tiara Roxanne—the yarn coiling around her bare feet, against her black clothes—moved in slow motion, continuously pulling and releasing the yarn that started to build a thread around her, around her body, narrowing the space that predicted her movement. She continued in congruence with the voice traversing into the room from the speakers, speaking of borders marking territories, the safe and the unsafe, keeping in and keeping out. It spoke of settler colonialism and of AI that learned from those biases.

In a similar way, but from a different personal narrative, Christoffer Horlitz spoke of the meaning of borders in his lecture on queering digital geographies. He investigated the question of what identifies us as the humans we are through a close look at how AI is operating with regards to producing digital identities such as biometrics, ID, access to social service and the connection of databases. Who is the legitimate human that does not need any special attention? An AI deciding which categories are bad / good, cannot be regarded as a neutral system, existing outside of othering politics. The answer to the issues cannot be that we normalize our bodies.

Queer as verb rather than noun, as practice rather than goal, as positionality rather than identity constituted the underlying logic running through the entire program. In this light, queer is not so much defined as something we are, but rather as something we do – shifting the concern from stable definition to continuous process. Queering as an act serves as a strategy that can be taken up by those that seek to actively complicate traditional notions and norms. This can be a particularly liberating tactic in dealing with identity, without necessarily binding it to essentialist identifications. 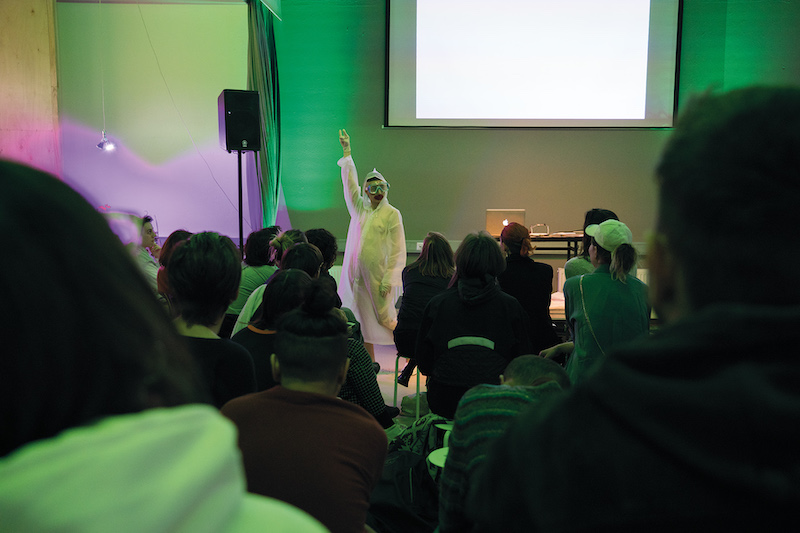 Doireann O’Malley’s Berlin Art Prize-winning film Prototypes (2018) encouraged a discussion about what cyberfeminism means to *Trans bodies and lives. Influenced by Jungian psychoanalysis, O’Malley used dreams and dream analysis as the resources for Prototypes, fusing those discourses with transgender studies, science fiction and bio politics. Monologues in the film were written in workshops that explored trans subjectivity amongst the film’s protagonists. One of its many interesting aspects was the comparison of gender to space. Testosterone is described as an architecture. It allows one to enter a room. To experience a different perspective. T, so we hear, is a substance that makes transformation possible, shows that humans are malleable. To be transgender feels liberating, it allows one to escape structures. Gender can be like a room, a shelter where one can feel safe. But it can also be like a prison, walls built around you, walls obstructed and maintained by yourself and by others.

Exposing oppressive structures in society and the way they operate, the symposium’s contributions engage us in a collective and embodied reflection on how to find a space for interrupting the binaries and the hierarchies through which such logics operate. The most interesting contributions of the symposium directly addressed investigations that leave the category of the universal subject uninterrogated. Drawing attention to those bodies that never quite made it into full humanity, a category that can only be taken for granted by those that fall into the category of the false universal subject—the white, cis, heterosexual, adult man—the contributors offered a pressing account of how white supremacy is still very much alive. Investigating how gender and race are operating through technology, how oppressive structures are being reproduced in the digital is an urgent issue that needs further addressing through situated practices, ones that explore how science and technology are closely related to capitalism, colonialism, militarism and racism.