Located inside the walls of the large skylight covered atrium of Deutsche Telekom Hauptstadtrepräsentanz in Berlin Mitte, the independent art fair Paper Positions assembles a total of 48 international galleries from 11 different countries this year. Having started out in 2016 as a comparably small group exhibition at Bikini Berlin, with 22 galleries participating, they have since then grown and relocated, now welcoming more than 130 artistic positions. As is clearly indicated by the fair’s name, paper serves as the overarching theme here, allowing each exhibited artist to present their individual handling of this fragile yet multifaceted medium. The open structure of the fair’s architecture allows visitors to venture freely, exploring how the works respond to one another. 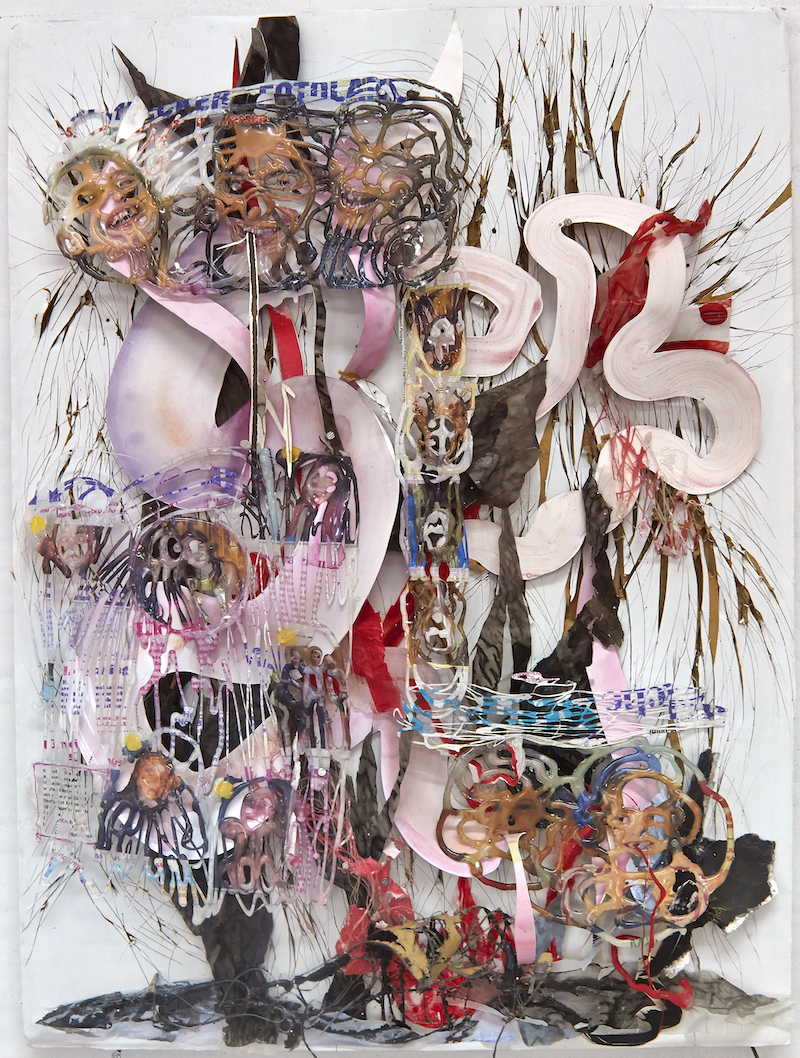 Walking in from the right, a large assemblage of glue strings, newspaper snippets and other cut-outs immediately catches your attention. Nadja Schöllhammer, who is represented by the Berlin-based C&K Galerie, presents different works all deploying a similar method. Different pieces of paper from various sources are layered on top of each other, resulting in a 3D image. Almost like sculptures, the works impose themselves with their faces staring back at you. While the technique remains the same, presenting, at first glance, a chaotic and somehow destructive ensemble, one of the works on the side seems somewhat more soft, incorporating less contrasted, but more subtle tones and shades. This contrast of form and content does not make it any less haunting. If anything, it seems all the more eerie and, in fact, delirious, in a nod to its title ‘Delirium (I)’ (2015). Consisting of cut-outs from magazines that depict teenage girls and happy families, the work seems to visualise a certain anger that those depictions may cause to those that cannot or do not want to identify with ideals represented by the media. 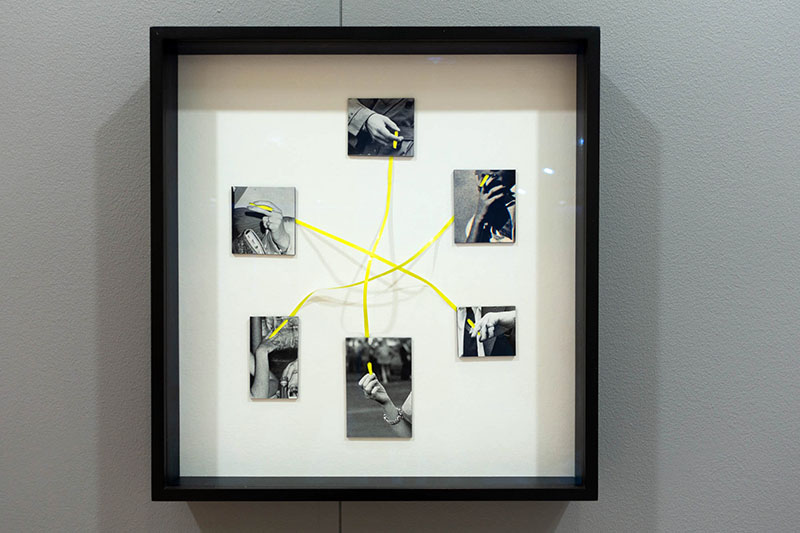 A work that further makes use of the appropriation of existing images, yet with a totally different aesthetic, is the work by the Austrian artist Karin Fisslthaler, represented by the Curve, the private gallery of Valerie von Meiss. Particularly interested in media representations and means of nonverbal communication such as gestures, hands are a recurring motif in her works. In the collage ‘Silent Conversation’ (2017), we find six black and white image details cut out into squares and placed next to each other in a circle. In each one of them, a hand is holding a cigarette. However, the shape of the cigarette is taken over by a neon yellow that comes out from the back of the image in the form of a string connecting each image with their opposite. The string serves to give a material quality to the gesture, pointing out its pervasiveness. Smoking here appears as an example of signs, of signifiers that we use in order to make visible a certain lifestyle, a certain disposition and habit that we want others to know and identify us by.

Ruohan Wang // Courtesy of the artist

Cartoonish characters in flashy colours await you on one side of the booth of Migrant Bird Space, the Berlin- & Beijing-based art foundation with a focus on contemporary Chinese art. The works of emerging artist and illustrator Ruohan Wang span prints, motion projects as well as public art. Her prints exhibited here are of bright, playful colours consisting of multiple characters and different daily objects. Noticeably, bodies appearing often do so in the multiplicity of 3 or more, making it seem as if it was one character who is moving. Interestingly enough, Wang creates GIFs out of the images, animating each character or object, which she shares over her instagram account. Next to it, a large paper that covers more than half the wall hangs down, depicting a jumble of black lines. ‘Leichte Obstruktion’ is a work by the young artist Yu Linhan, whose aesthetic is based on photographs of wires or cable structures he took during his hospital stays in 2011 and 2018. Knowing this detail from his personal history, the abstract, modernist-seeming image takes on a completely different meaning. 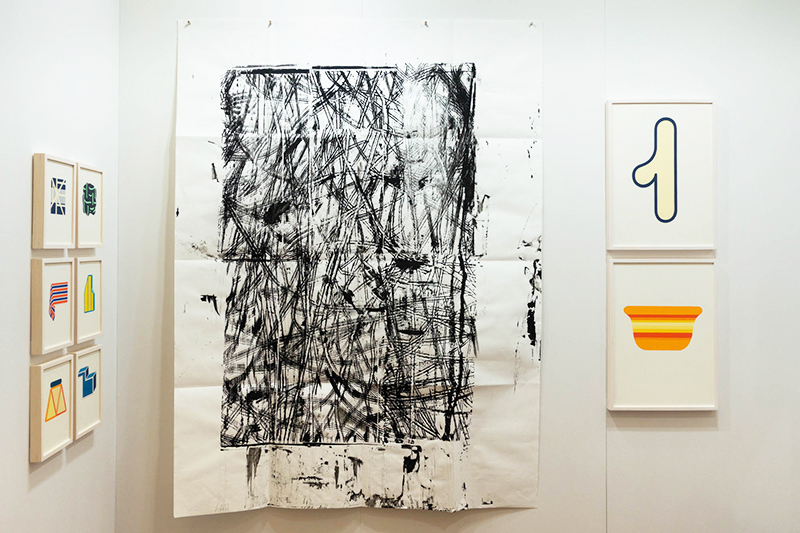 This year’s Paper Positions brings together an array of works that, despite being produced by the same medium, differ in their aesthetic, content and form. Exhibited works are to be regarded as examples of the medium’s diversity, manifesting its meaning for contemporaneity, especially since the 2019 fair presents such an affordable array of works by young, emerging artists.