Stretching the borders of what constitutes the Potsdamer Straße gallery district, my Gallery Weekend tour began a few U-Bahn stops away at Galerie Max Hetzler, to include the doubleheader exhibition ‘Who We Are’ by Adam Pendleton, at both of the gallery’s locations. Pendleton is known for his multidisciplinary practice that probes constructs of history, identity and language. Early in the evening the Bleibtreustraße gallery was quiet and still, with lots of space for the plentiful series of layered textual works to speak to and fro across the rooms, in conversation. 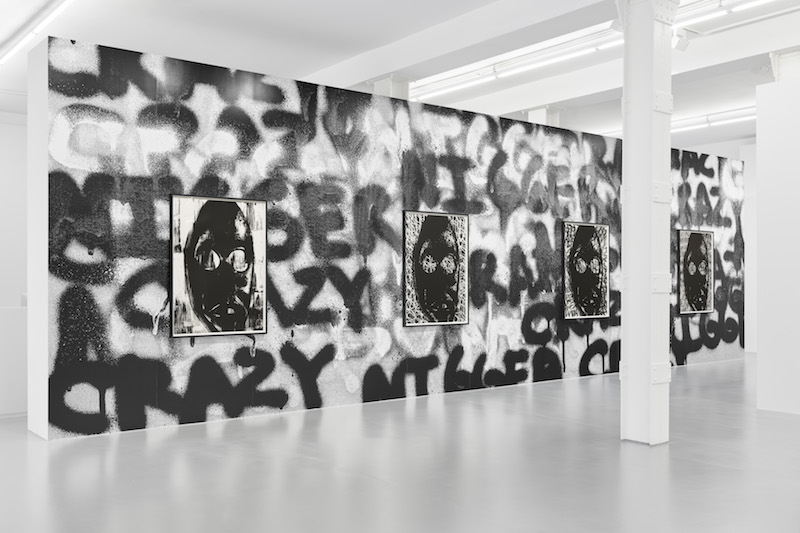 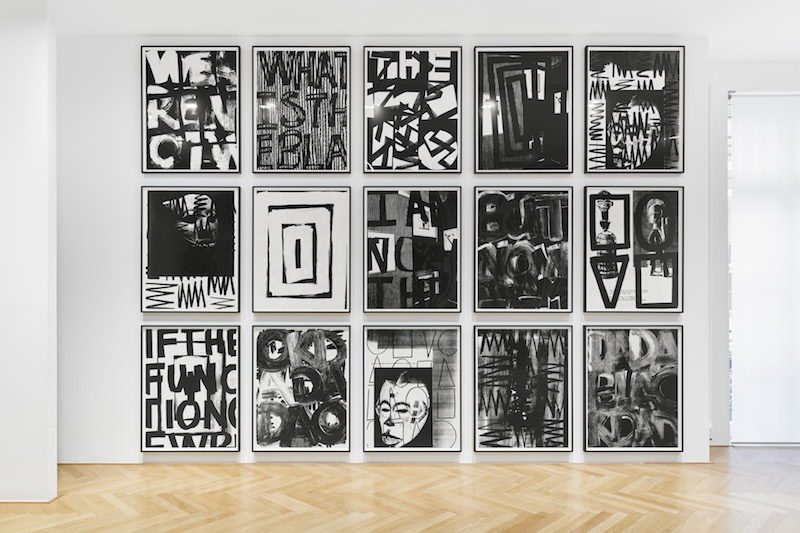 The conversation was with Black American histories past, present and future. Pendleton’s contextual layering and juxtaposition—a style he calls Black Dada—brings together art histories from East African carvings to experimental compositions by Julius Eastman. Printed like spray paint, phrases such as “WE ARE NOT” and “BUT NOW I AM” are in dialogue with the repeated words “CRAZY N***ER”, the title of Eastman’s 1979 piano composition. In a room of ceiling to floor screen prints the effect was like a crowd of people telling overlapping stories. A ten minute walk away at the gallery’s Goethestraße space, Pendleton extended the catalogue with small mirrored wall works and two videos about choreographers Ishmael Houston-Jones and Yvonne Rainer, who share memories from their personal and professional lives.

From here, my evening centered around the well-trodden route between the dense cluster of galleries within a small radius of Postdamer Straße. By now packs of gallery-goers were bulging out of doorways and onto the pavement. As I arrived at the non-profit art space PS120, a performance by Monilola Ilupeju was underway. On a makeshift bed surrounded by the objects and debris of life, Ilupeju performed the basic tasks of a daily routine—dressing, sleeping, brushing her teeth—with an appropriate banality, occasionally subverted by small unusual acts, such as spitting mouthfuls of water into her sneaker. During much of my visit, Ilupeju was “sleeping” and, despite the entirely public staging, I became acutely aware of the mob of voyeurs I was part of, watching her lay exposed as she tossed and adjusted her eye mask. 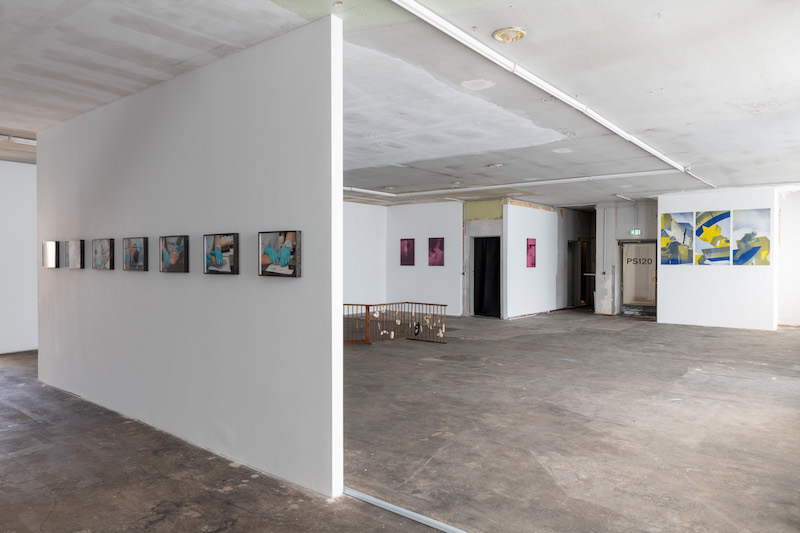 The group show, titled ‘Innocence’, seeks to subvert the very notion of the word. Taking concepts of innocence from psychoanalysis, the curators charge viewers with the task of seeking out a perceived innocence and its mechanisms. With this in mind, I found myself—once Ilupeju was awake and the lights came back on—suspiciously scanning each work for evidence of potential innocence, projected or subverted. Notions of political innocence are under investigation in several works, most plainly in the inclusion of the 1970s TV drama ‘Bambule’ made by Ulrike Meinhof and Eberhard Itzenplitz, shortly before Meinhof co-founded the Red Army Faction and went on to commit acts of domestic terrorism. The assumption of children as untainted or apolitical subjects is also a recurring theme of show. I was reminded that we are often so amused or disturbed by children acting as adults and wondered whose innocence is really at stake. 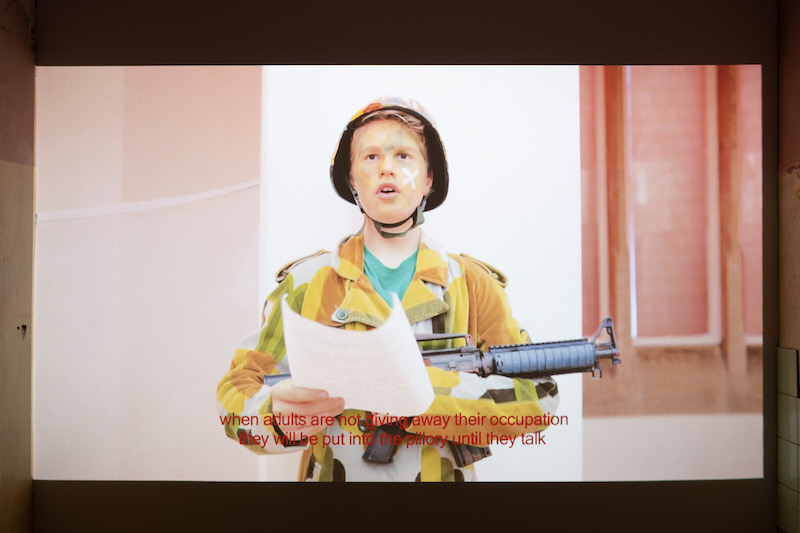 Tobias Madison: ‘Blood Clotting in the Flesh of a Pear While Biting’, 2016, installation view, 2019 // Photo by Stefan Korte

In the courtyard of the Potsdamer Straße 81 complex, the crowds were reaching critical mass. On the top floor at Esther Schipper, works by Ryan Gander quietly ponder questions of time, lifecycles and the life of the artist. Footprints in snow, rendered in white carpet, show a moment of action frozen in time. A calendar year is evidenced through repetitive daily attempts by Gander to draw the same thing over and over—a candle going out. An illuminated staircase to nowhere is placed opposite a small mechanic mouse peeking out from a hole in the wall, trapped in a time loop. ‘Some Other Life’ is introspective, conceptual and self-contained. There are hints of narratives and the personal world of the artist, yet with an overall sense of the endless cycles of time that govern. I’m sure this sense would be heightened during a less busy viewing, when the constant low volume ticking emanating from 24 grey cubes scattered across the carpet could be heard.

Contrasting Gander’s subtle meditations, I was greeted in Galerie Isabella Bortolozzi by what appeared to be some sort of goblin Lord, sitting slumped on a throne. Throughout the gallery, moss-covered brick fountains and stone reliefs formed an ancient fairytale setting inhabited by absurd looking beings connected to plastic pipes, which were transporting some kind of green ooze. This is the world of Veit Laurent Kurz’s ‘Nutrition and Drama’ set in an alternate ancient Pompeii where the nutrient-rich feces of the exploited Dilldapp species is harvested for the smart drug HERBA-4. This is a world—or a complete biosphere—Kurz has been cultivating for several years. The story of the Dilldapp civilisation tells a familiar tale: a once-thriving species living harmoniously in a biodiverse habitat, becomes threatened by tourism, captured and exploited for resources. I’m reminded of the claim to innocence challenged by the PS120 curators. Does imagining alternate worlds project an unobtainable innocence upon them? The show is a neat allegorical summary of imperialism and capitalism. If the familiarity of this fantasy is designed to confront audiences with the real-life atrocities committed against whole peoples and natural environments then this is a case of fact being bleaker than fiction. 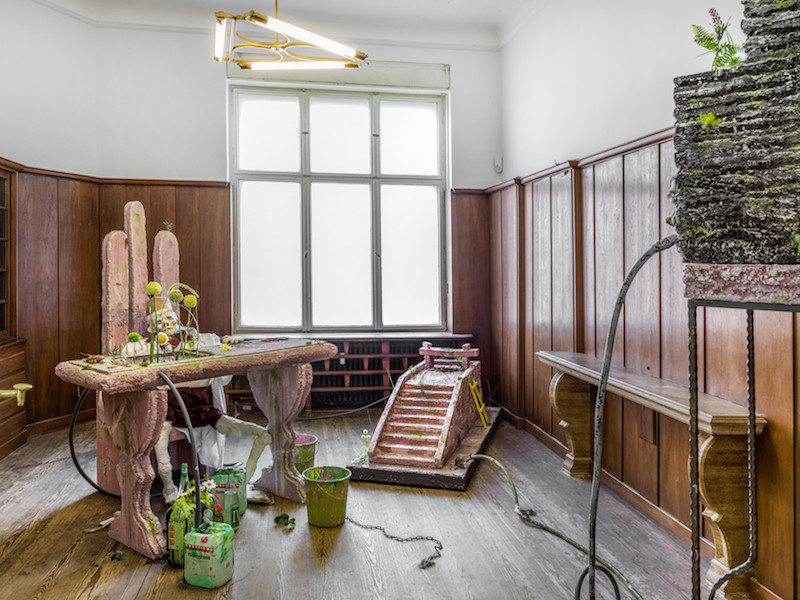 At 9:20pm I decided to try my luck at one last gallery. ‘Death of a Housewife’ by Oscar Enberg occupies the small, single-room space of Stadium. The size of the space sets the tone for an intimate experience, and I was lucky to have the room mostly to myself for a few minutes. Enberg’s sculptural objects have an eerie domestic familiarity and a refined craftsmanship to them, like a family heirloom discovered in the attic. It felt like walking uninvited into someone’s home, dotted with familiar objects that certainly belong to someone else, while they’re away. This someone is 20th Century Swiss artist Sophie Taeuber-Arp, the mislabeled “housewife” of the show’s title (the official police report after her death stated her occupation as such). The room is full of considered gestures that build a murky narrative of the imagined housewife. Alongside tokens of domestic labour, a horn handled knife protrudes from the wall above a floorboard that has been raised a hands-width from the floor, exposing a shadowy cavity. We are treated to a glimpse of a private life and it’s full of enticing clues. The irony, of course, being that this is not actually the life of Sophie Taeuber-Arp, who had an influential and celebrated career as an artist. Enberg, as though winking to the real Taueber-Arp, pays homage to her abstract geometric forms in his installed stained-glass window that shone brightly into the courtyard outside, as I took myself home. 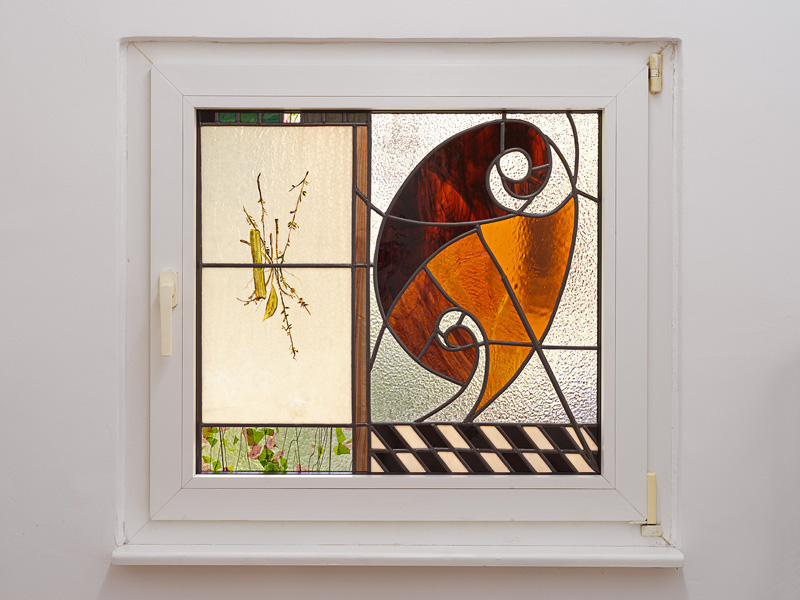 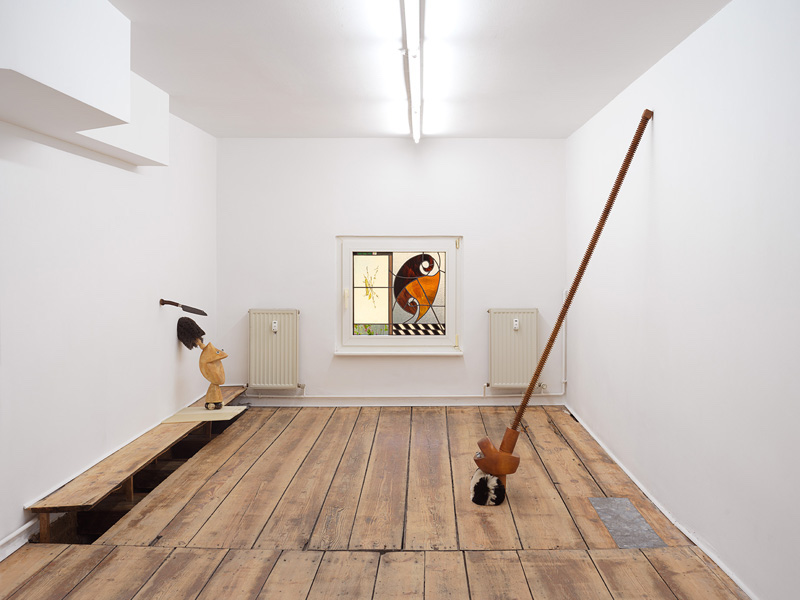 Oscar Enberg: ‘Death of a Housewife’, 2019, installation view // Courtesy of the artist and stadium, Berlin