‘Natascha Süder Happelmann’ provides a perfect entry point into Natascha Sadr Haghighian’s practice – one that strictly forbids introducing the artist with biographical details and the usual recitation of exhibitions and awards. Adapting this international misspelling in order to take on the monumental task of representing Germany in the 2019 Venice Biennale, Haghighian challenges the stability of a name in general and the representative function it has among institutional authorities and within the context of artistic production more broadly. 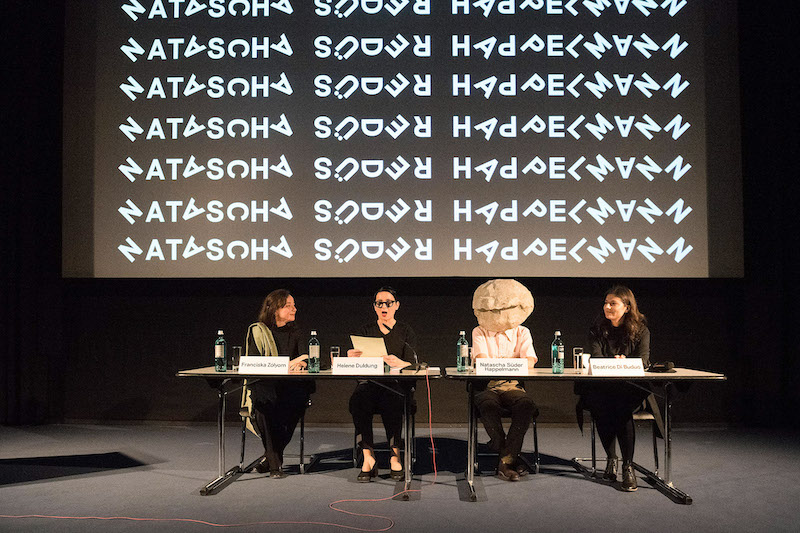 Instead of providing a CV, Haghighian directs attention to www.bioswop.net, a work in progress that accumulates different CVs by artists and other cultural practitioners. Online and open for exchange since October 2004, the project treats a CV for what it is: a list of successes that translates biographical information and artistic performance into economical capital. More than that, by demonstrating its redundancy and exchangeability, Bioswop renders the value related to this quantifiable data irrelevant. In the hands of institutional bodies, the artist’s CV remains an accepted emblem of validity, an unquestioned tool used to legitimate the artist’s individual status in the art world economy and their cultural capital. Bioswop attacks this logic, exposing the unspoken requirements that have to manifest in the artist’s CV. Further, it challenges the association of this personal data sheet with an art work. The relation that is created distorts the way in which many artworks are produced. Far from being the work of a singular pair of hands, artworks are products of the networks they are created within. The complexity of contemporary art production, however, is no use to a marketplace obsessed with brands and singular identities.

Drawing attention to the ‘who’ and the ‘what’, in relation to the production of art, is an integral part of Haghighian’s conceptual practice. Who is the one making the art today, what is the actual process of making it and what determines its validation and valuation? ‘I can’t work like this’ (2007)—a work commissioned by Johann König to act as the sole piece exhibited in an art fair booth—is a direct reflection of her working process in the conditions specific to its situation and its socioeconomic context. ‘I can’t work like this’ appears on the wall, spelled out from left to right, visible through nails hammered into the wall. With nails and hammer as the most common tools of art installation labor, the message couldn’t be more straightforward. Instead of drawing attention to a specific artistic object or content, ‘I can’t work like this’ draws attention to the structures of production and the frustration it causes in relation to the creative output it determines. Haghighian describes this shift of interest from content to structure as a strategy for confronting the system that tries to keep your mind occupied thinking about content, while encouraging you to forget about the structure keeping everything as it is.

‘Robbie Williams. Solo Show’ (2008), a project initiated by Haghighian and Uwe Schwarzer, further investigates the concept of authorship in the format of a solo exhibition, which is, in fact, only realisable through the labour of multiple people such as architects, assistants, technicians, to name a few. It is Haghighian’s answer to MAMbo’s invitation to host a one-person show. One room hosts an installation of five objects that look like jumping fences, the other is equipped with speakers that send the sound of galloping horses into the space. Through the invention of Robbie Williams, the artist not the singer, the project responds to MAMbo’s demand of a one-person show, while simultaneously listing all individual names that contributed to the construction of the exhibition, or rather its deconstruction.

In her sound installation ‘pssst Leopard 2A7+’ (2013)—her third solo exhibition at Johann König in 2013— Haghighian deals with the phenomena of public secrecy. Specifically, an open secret that is “officially” restricted in knowledge, but de facto widely known: that Germany is the third-largest weapons manufacturer in the world. The wooden construction placed in the center of the room is an imitation of the battled tank Leopard 2A7+, developed for deployment in urban environments, designed to operate in low as well as high intensity conflicts. The immobile construction in the exhibition is the exact same size as the tank. Blue, green and grey lego baseplates span its cover. In its middle, headphone jacks are placed in a circle reminiscent of the pivotable gun barrel. The sounds one can listen to are field recordings, noises from inside of the tank, echoes reminiscent of the places it was travelling through. They further include the Rüstungsexportbericht (German Armaments Export Report) and a letter during the Egyptian revolution. ‘pssst Leopard 2A7+’ is part of an ongoing research investigating the militarization of urban environments, taking the Leopard 2A7+ as one product exported by German arms manufacturers. Through its sonic component, it asks its listeners and viewers what kind of magic is necessary to unmask the public secret around this tank and the general issues around the militarization of urban spaces.

Seeking to destabilise systems of representation and hierarchies present in the art world, Haghighian explores issues of control, power and manipulation through a close examination of prevailing rules of representation and inherent ideologies of institutional bodies. How to engage with open secrets? How to take responsibility in relation to what, officially, no-one knows? How to deal with spaces that are, as Happelmann believes, already ruins at the time of their creation?

For her participation in the Venice Biennale, Natascha Süder Happelmann works together with a set of musicians coming from various backgrounds, including Jessica Ekomane, Maurice Loucas, DJs Marlon Silva alias DJ Marfox, Jako Maron, Tisha Mukarji and Elnaz Seyedi, and we expect them to collectively consider the structures that surround Happelmann’s representation of Germany in the Venice Biennale itself.