A piano with some of its panels removed and innards exposed sits in Jesse Darling’s Berlin studio. It’s a broken piano they got for free, not exactly material for a new sculpture (at least, not yet). When I visited, their studio contained more “abortions, miscarriages and leftovers” than works-in-progress. The piano, instead, aptly summarizes their exploration of vulnerability: be it the impermanence of material things or the fragility that always accompanies any claims to grandiosity or heroism. “I just took about four screws out. It seems sad, how easy it is to take a piano apart,” they told me, then demonstrated. Discarded, impermanent and fragile objects are often their sculptures’ materials, and can be seen around the artist’s studio. They see their practice as “arranging garbage into patterns, whether literally or not.” It’s a process that offers an alternative to the heroism, machoism and even athleticism that have often informed Western sculptural practices. 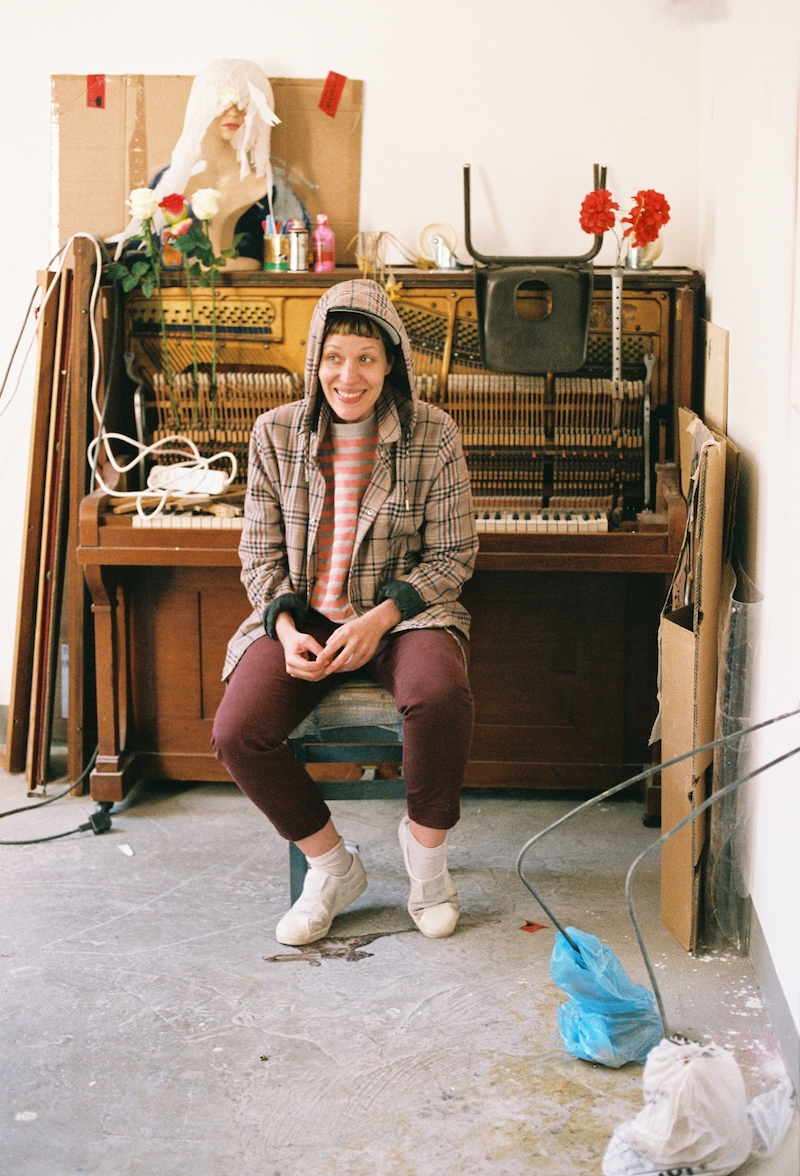 Most of the time, the fragility they summon stands in for our own bodily fragility. Yet, though bodies are often conjured, they are rarely represented. That’s deliberate: “representation is a really big problem,” Darling and I agreed. There is, for instance, the problem of assigning broader concerns to a specific body. “I didn’t wanna be this universal everybody,” they said, noting the importance of always including race in any conversation on gender or disability, “but I did want to open up the experience of my work.”

Sometimes, allegorical or cultural figures make appearances: the artist’s recent show at the Tate Britain, ‘The Ballad of St. Jerome’, investigated a Saint oft-depicted throughout art history. Though, in fact, he’s nowhere to be seen in Darling’s rendition. Batman and “Lady Batman” recur in their work, too: as in ‘Our Lady Batman of the Empty Center (Temporary Relief)’, and a drawing or two in the studio. Batman and St. Jerome have been represented countless ways in culture, high and low. This is precisely what makes them of interest to Darling, who deems appropriation an “important question for artists now,” noting that, “everyone should take it seriously. Not in order to be seen to be doing right or wrong in the Christian sense… but to think about histories of extractive relations as inherent to material reality, which is to say, the materials one works with. There’s no neutral ground.” 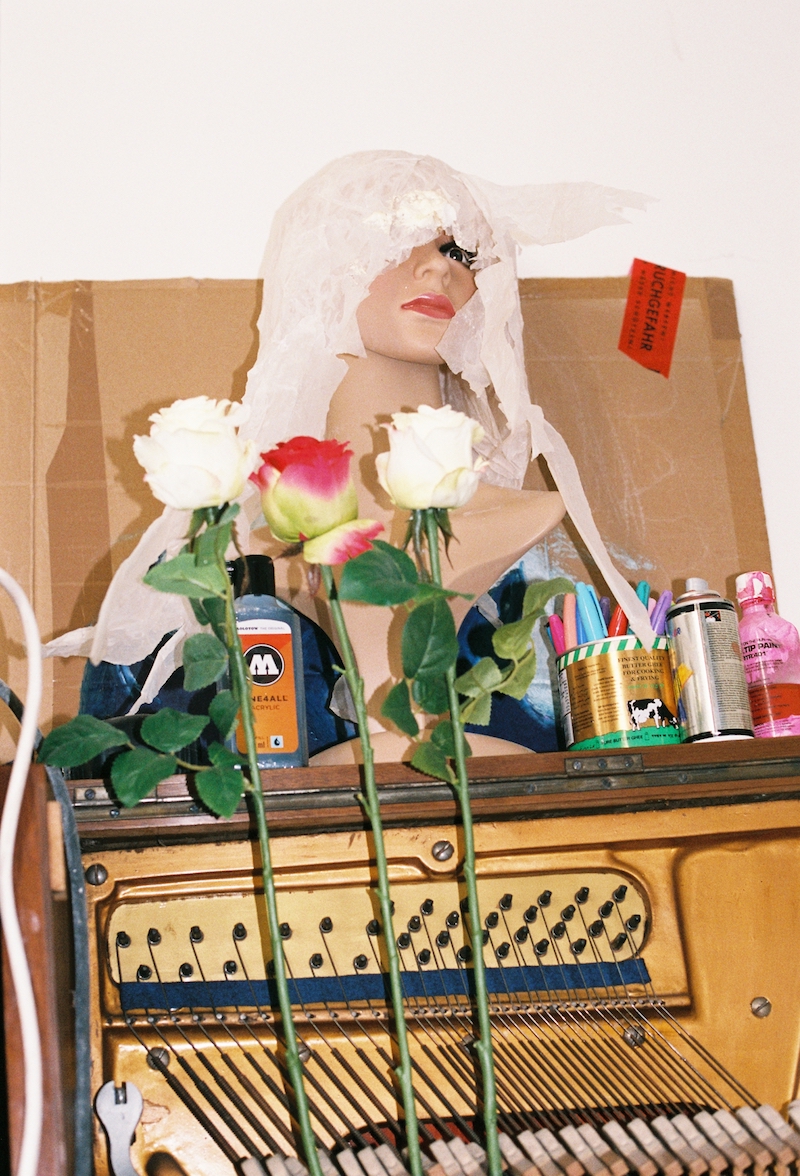 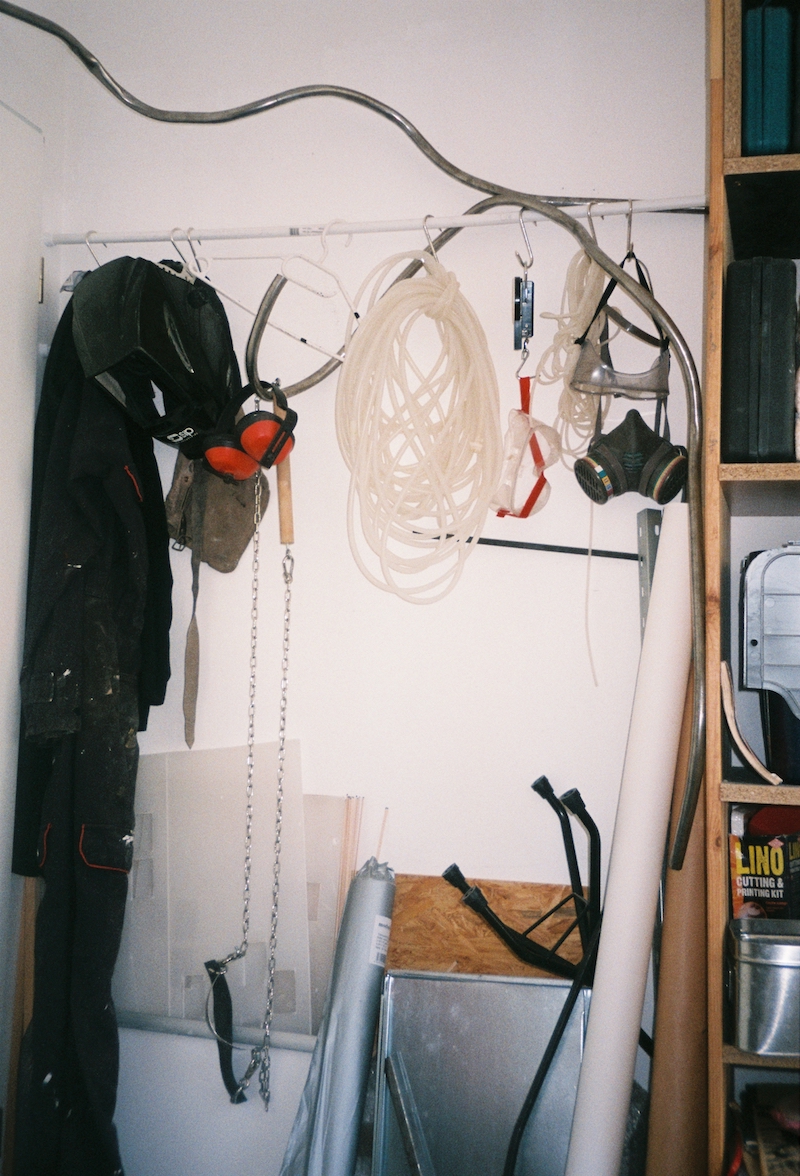 Batman “belongs to a pretty weak-ass situation I’d describe as my own culture, which is to say a white anglo-European culture that longs ambivalently towards the cultural exports of imperial USA. In the context of capitalist modernity, which has its own syncretism, Batman may as well be some kind of lesser saint.” They relate to the character, too: “Batman is like this closeted white dude who is mentally ill, all kinds of damaged, total white savior complex.” A venerated nobody. “I sort of identify with Batman because he’s such a loser and he’s trying so hard. That’s my masculinity, y’know. And I can’t take my masculinity seriously because it’s ridiculous. Not to say that everybody’s masculinity is ridiculous but Batman masc is totally ridiculous, and that’s what the truncated teenage boy in me still somehow thinks he wants to be.” 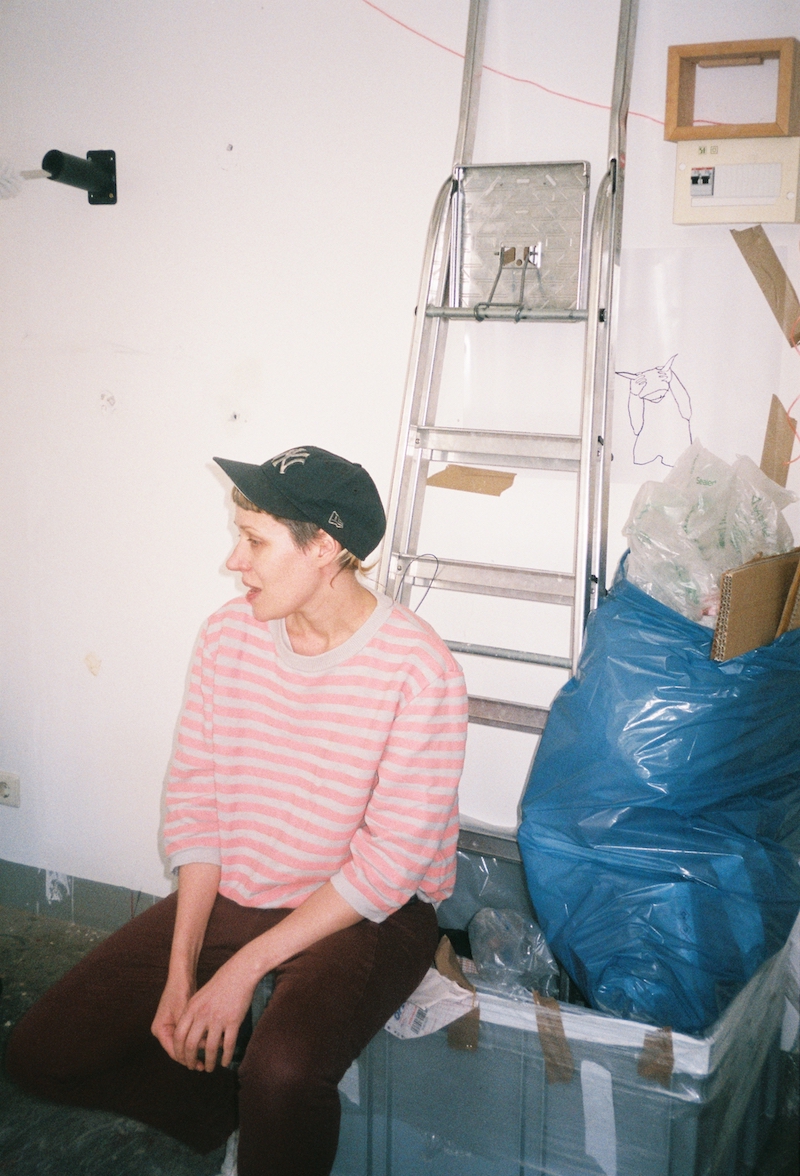 At times, Darling conjures bodies and their vulnerabilities through objects used to support, augment or care for them. ‘Brazen Serpent 2’ (2018) is made of two crutches in the shape of rising serpents, and ‘Wounded Paw/Blind Leading Blind’ (2018) comprises nipple clamps that squeeze a pair of EKG stickers, which are roughly nipple-sized and -shaped. We talked about the current fascination with prosthetics, the cyborg and the post-human in lots of recent art, and wondered if this fascination is maybe both ableist and transphobic, romanticizing what is very quotidian for many people. Certainly, you’ll find no shiny, perfect objects in Darling’s studio, and their use of objects of support offers no grand claims to fixing bodies or eternal life. 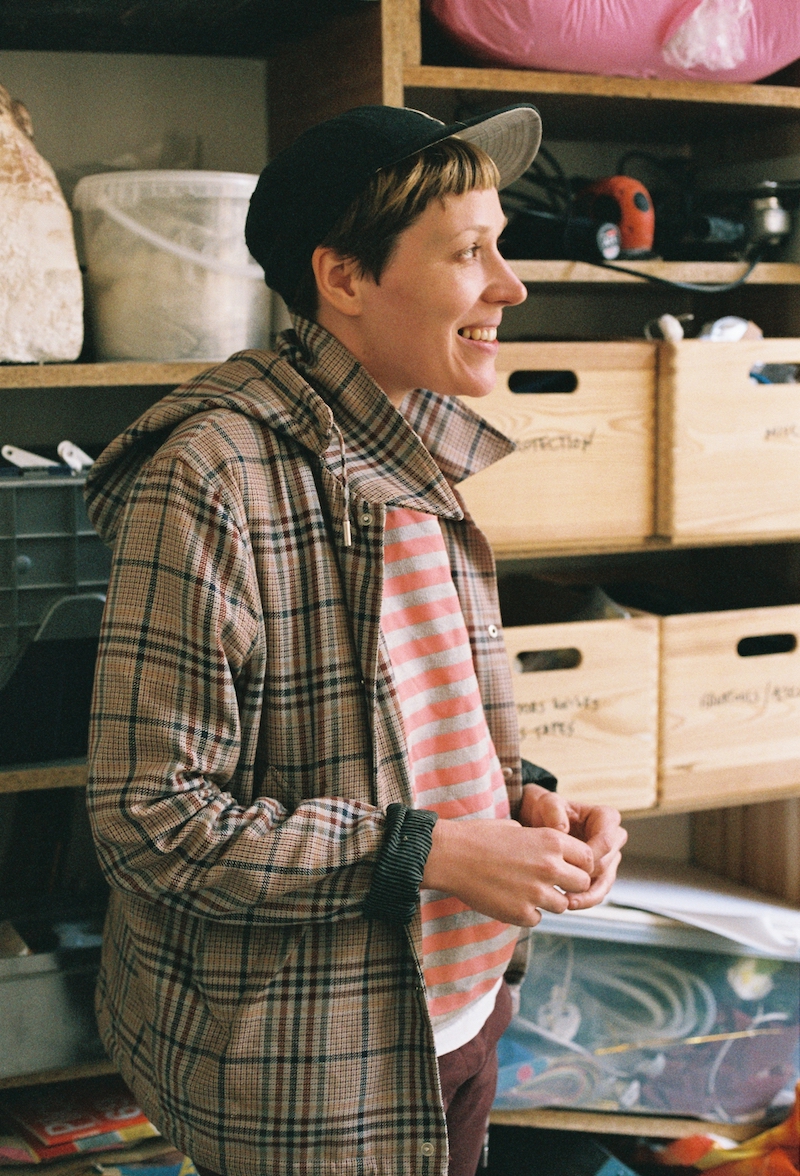 Though their work is often loaded with queer signifiers, they’re not legible to everyone. As they put it: “if you don’t know, you don’t know.” This tactic of ambiguity works to keep their audience wide: not forgoing or eliminating what may register as offensive to some, but instead rendering it less immediate. At the same time, they push against the art institution’s proclivity to ossify and commodify by exhibiting fragile and impermanent sculptures: take, for instance, their current show ‘Crevé’ at Triangle France in Marseilles. Jars of flowers are installed inside a vitrine common to the white cube’s architecture. Yet the flowers—what we often give to others in times of love, sickness and mourning—can’t be ossified despite the desperate plea of their encasement. A few fake flowers sat on Darling’s piano, and we talked about fake flowers left on graves, death as the most permanent thing there is. Pairs of feet along the wall both in Marseilles and in the studio are made of unfired clay; neither these nor the flowers will last past the exhibition’s duration. 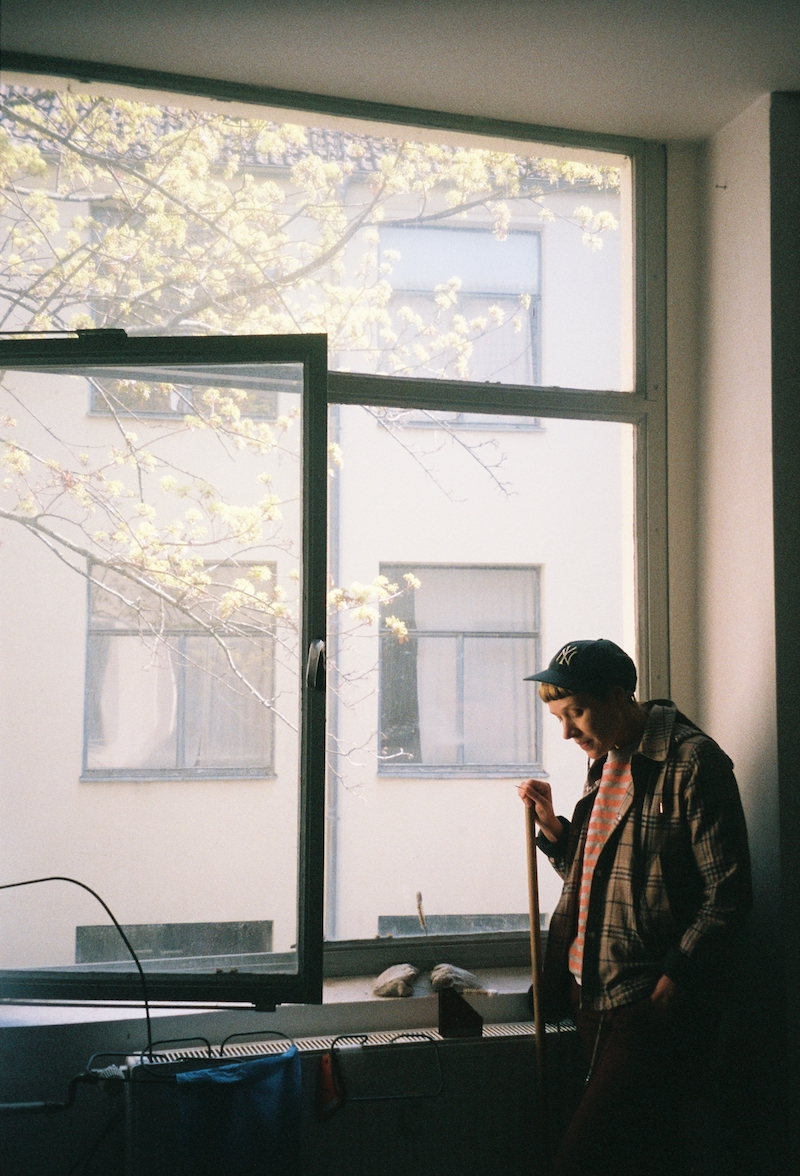 Darling mingles the direct and ambiguous in order to disallow someone from looking at the work and thinking, “this is not for me.” It shouldn’t be that easy. We can all afford to be addressed by lifestyles we’ve not imagined for ourselves. This approach is both imperative and refreshing during this highly divisive time. Darling’s work addresses non-binary life, yes, in the gendered sense but also by remaining firm yet decidedly non-antagonizing: it takes stances without being polemical, refusing to binarize left and right, queer and straight, sick and not.