For the Berliner Tanztage in March of this year, the performer Olympia Bukkakis presented ‘Gender Euphoria’, a performance-lecture-cabaret show that proposes drag as a way to experience not only a sense of euphoria, but also a radical utopia, one in which gender and identity are truly unoppressive. In it, Bukkakis is at times a construction worker who physically wrestles with the construction of gender; a lecturer who discusses Judith Butler; a moving sculpture; an emcee. Bukkakis has the ability to be insightful and hilarious in the same breath. At one point, Rosa Luxemburg is presented as a “party girl”. In addition to being incredibly charismatic on stage, she seems most comfortable shape-shifting between different characters, effectively defying categories and asking us to consider drag as innately political. In contrast to the RuPaulian version of drag—which seems to be the dominant image of drag in popular culture—the version Bukkakis champions is critical and complex, implicating everyone’s individual and collective performativity within the crushing constraints of binaries. 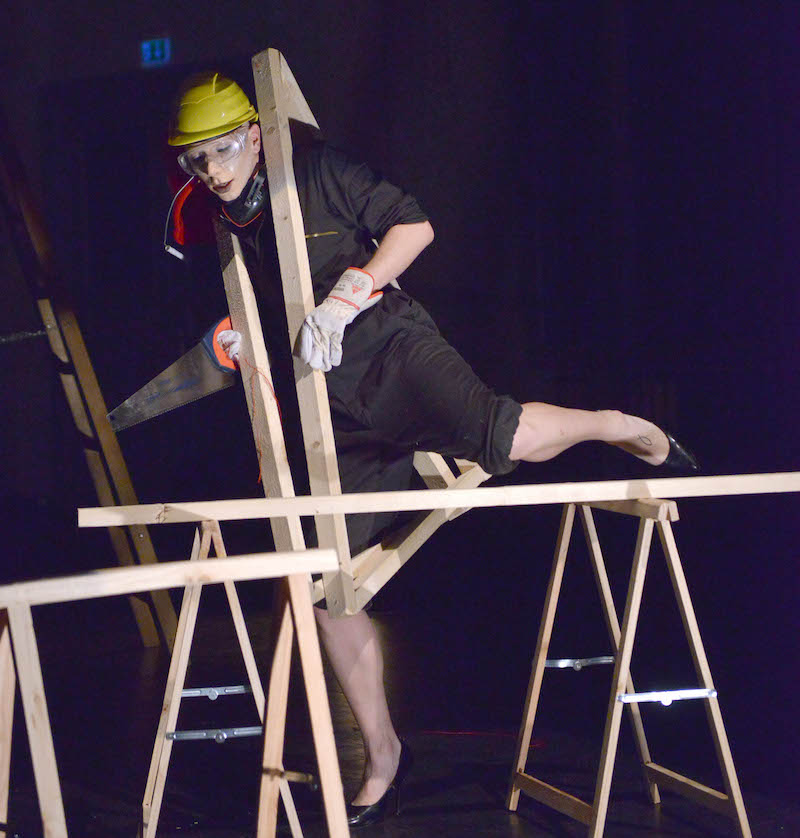 Originally from Australia, Olympia Bukkakis has been an integral part of the alternative drag scene in Berlin since 2012. These days she can be found straddling the worlds of nightclubs and theaters. She regularly hosts ‘Get Fucked’, ‘Cheryl & Olympia Can Host’ and ‘Queens Against Borders’ (QAB) and will be performing a manifesto in the festival ‘The Present is Not Enough’ at HAU, as well as appearances at Whole and Melt festivals over the summer.

I chatted with her about her project ‘Queens Against Borders’, using socialist theories to think through queer identity politics and Walter Benjamin.

Ilyn Wong: You regularly host ‘Queens Against Borders’ at SO36. Tell me a little about that.

Olympia Bukkakis: ‘Queens Against Borders’ is a solidarity project that I founded in 2015 and it has grown into a co-refugee organised series of performance parties. More than half of our acts are refugees but our main focus is on building bridges of solidarity between different communities. So we’re not a “refugee party” per se, but rather a group of people from different backgrounds committed to dismantling the various barriers that divide us.

IW: One of the issues ‘Queens Against Borders’ addresses is that identity politics and contingencies around dislocation/conflict/diaspora/migration are often placed in two separate categories, effectively flattening out the layers and interwoven complexities between the personal and political. What’s your take on that?

OB: It’s true that queer politics and anti-racist/migrant rights/refugee politics are often placed in two separate baskets, which puts trans and queer refugees in a difficult position. In Germany and many other places “the refugee” has been held up by the right as a terror figure who threatens our (white) women and children. This is an old racist trope, but it’s now been updated to include queers and trans people. So people are arguing that refugees are bad for us homos. It’s touching that the right are finally interested in our humanity, but their real xenophobic motivations are clear for anyone who wants to see it. In our current situation, I think it’s really important that queer politics are always articulated with an anti-racist perspective in mind. What really helped me to make this conclusion is also a background understanding of socialist economics. Those in power have a vested interest in separating us from each other. We’re not having any of that at QAB. 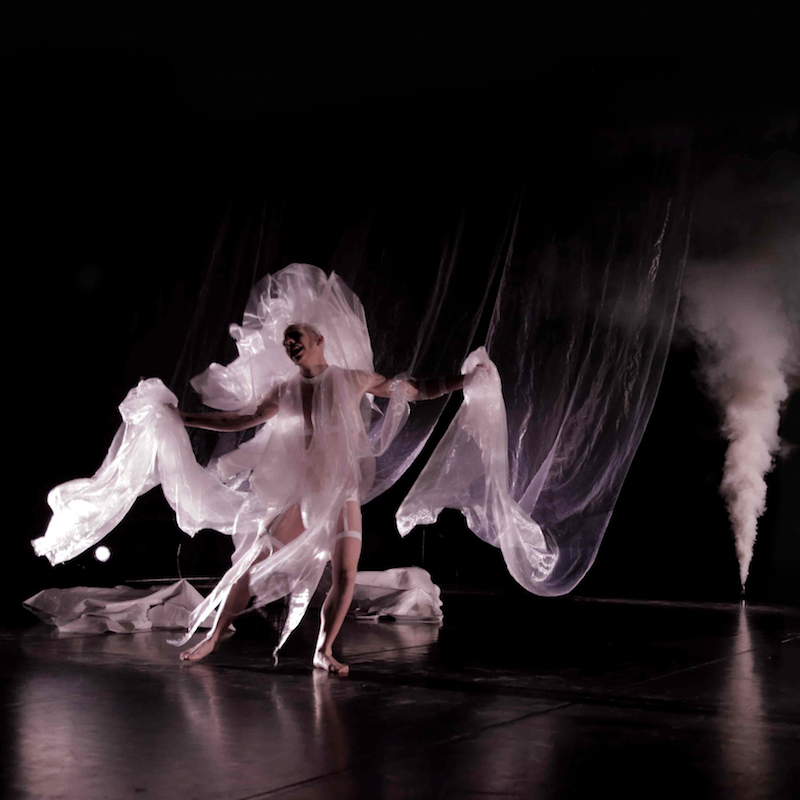 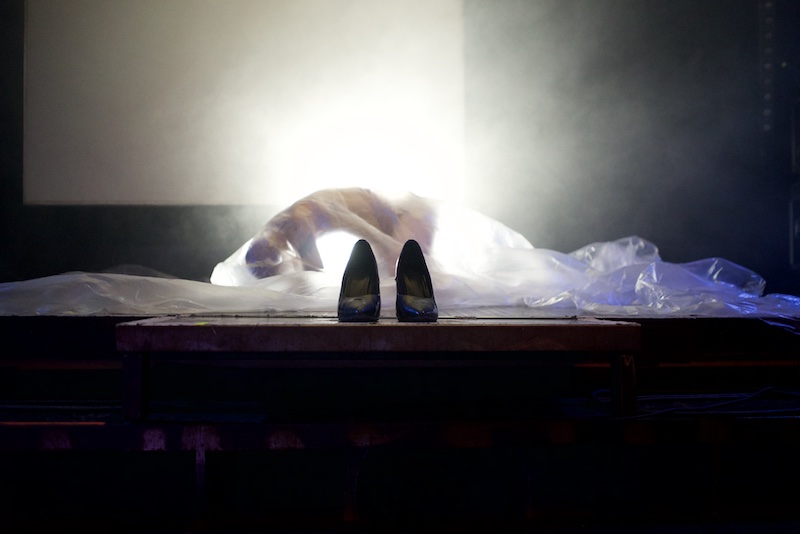 OB: We call QAB a solidarity project because we oppose the capitalist charity model. We’re not offering a hand to those less fortunate. The project is co-run by the Darvish, who is a refugee, and we continually seek feedback from our refugee performers because they know best what their needs are. This is how we see solidarity as a way of facilitating self-determination, rather than deciding what we will give to the subjects of our generosity.

IW: You recently completed a Master’s Degree at the Hochschulübergreifendes Zentrum Tanz (HZT) Berlin, at the end of which you presented a work called ‘Tales From A State of Shemergency’. Tell me a little about the impetus behind this work.

OB: During my master’s I learned a totally new way of making work. I got an opportunity to undertake a research process that wasn’t possible in my queer nightlife performance practice. For ‘Shemergency’ I was investigating my relationship with the past, so I picked a few different genres of storytelling and tried different ways of doing them “wrong.” I could be zeitgeisty and say I queered them. I ended up making a piece that was an attempt to make peace with all the ghosts of my past. It was very intense. The psychodynamic therapy I was doing at the time was an important part of the process, but certainly didn’t make it less hectic.

IW: I loved the way you combined dance and drag to literally move through seemingly divergent subject matters. One of the parts I found most moving is the sampling of Benjamin’s well-known text ‘Theses On The Philosophy of History’, but the familiar Angel of History in your rendition becomes a drag performer. Benjamin’s Angel is so hopeless and helpless: inertly observing the piles of destruction of debris left by the atrocities of history and not doing much about it, and notably not helping us. Your Angel felt different – more agency perhaps.

OB: The ‘Angel of Herstory’ section came from a practice I have of misquotation, which is an attempt to re-write queer themes and characters in the histories from which we have been erased. I was feeling like the past for me is a very dark place in many ways, both personally and collectively in that my home country was conquered and settled through genocide. I really liked the pessimistic and depressive tone of the ‘Theses on the Philosophy of History’ and found the figure of the angel to be an incredible image. I was thinking about how to queer him and then it came to me that she’s a drag queen. Benjamin’s angel stares hopelessly at history but I thought if she was a drag queen she could at least offer some sympathy or consolation. We queens do that for our audiences when we make a moment of fantasy or glamour out of the raw materials of the late capitalist drudgery that makes up our lives. I think it helps sustain queer communities through some of the hatred and violence that we experience and I wanted to offer something of this to my audience, after all the heavy shit I’d just thrown their way. 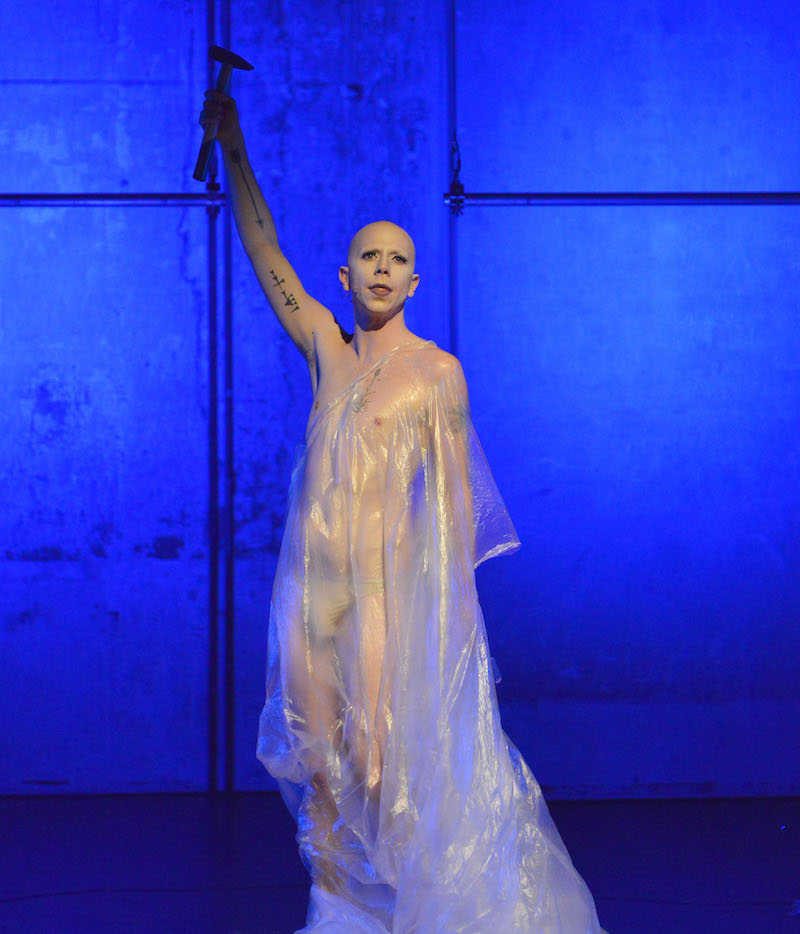 IW: In terms of offering your audience relief, humour is very present in your work: sometimes in the form of straightforward stand-up comedy, but often you use a kind of laughing-together as a vehicle or lubricant to go somewhere uncomfortable. I’ve seen the process of you carrying the audience from a place where they assume they are just being entertained to somewhere totally different and often sinister, all the while everyone is still laughing continuously.

OB: Humour is a survival strategy for me. I learned very early that I could use it to defuse the social tension that my femininity and gentleness created in the small country towns I grew up in. It’s a way to cope with or face the pain and trauma of my life and my past. As a performer, humour is also a great way to get people to want to look at and listen to you. And maybe because being funny started out as a coping strategy, I have a pretty dark sense of humour. I’m also interested in the fact that a lot of the things that we find funny are based on bigotry. There’s a reason why bad, straight, white male comedians always reach for offensive and cruel tropes about women, queers and people of colour. We’re programmed to find that shit funny and it’s the closest thing to hand. So I’m interested in how this process can be subverted, where we find ourselves laughing at our own assumptions and the contingent foundations of our own identities. I also just find that if you want to deliver an uncomfortable opinion, it helps to get people on your side by making them laugh. They’re more willing to listen after that because you’ve offered them something. 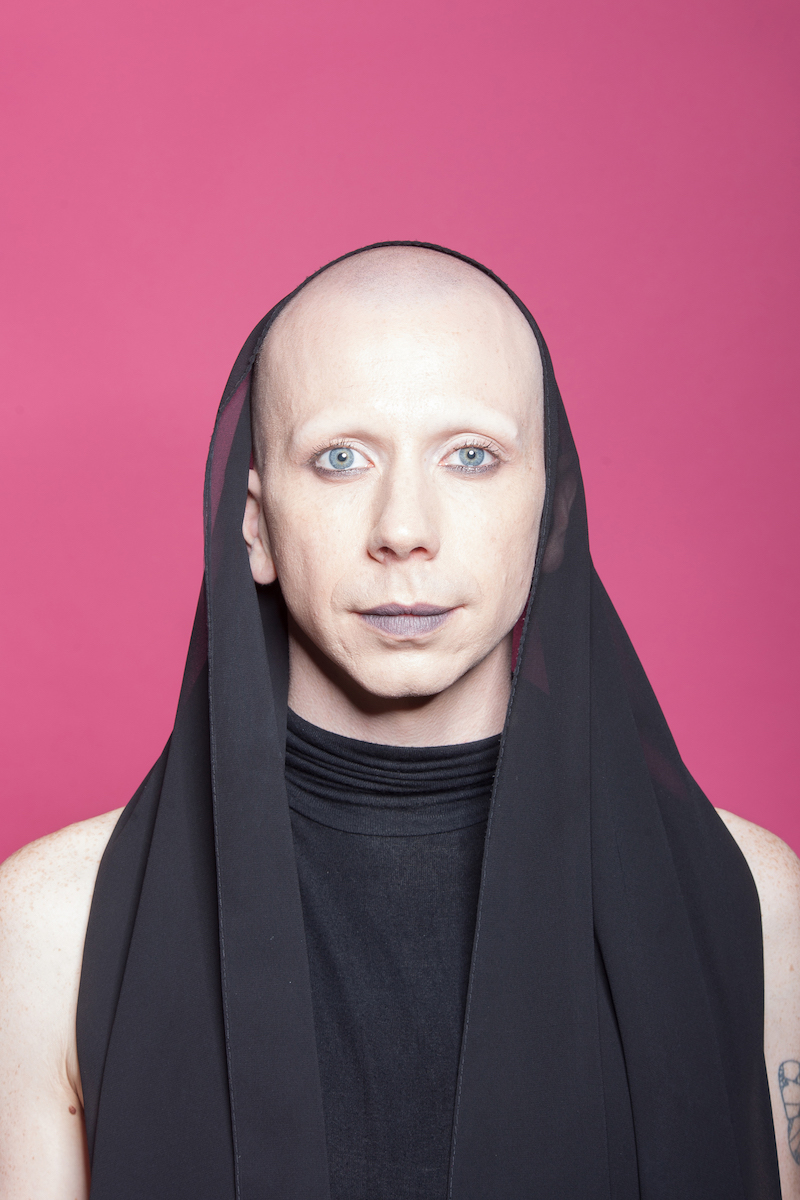