It’s hotter inside than outside at this time of year, especially in Christa Joo Hyun D’Angelo’s sunny third-floor Kreuzberg studio. Floating through the window from the courtyard below is some kind of unintelligible chant; we assume it’s emanating from a class at Tanzfabrik, just across the alleyway. Before heading to the studio, I met D’Angelo at a farmer’s market nearby, where a Mexican food truck distracted us from the strawberries: authentic Mexican food is a rarity in this city, practically nonexistent. We debated eating there, but soon decided it was too hot to ingest even hotter food. The market led us to a conversation about how food can be a politicized object, sometimes denoting familial displacement or a country’s history of colonization. And although D’Angelo might not directly use food in her artistic practice—which comprises video, sculpture, collage and installation—she does confront issues such as these on personal, local and global scales. Her artwork poses politically-charged questions about migration, power, race, class structure and sexuality through aesthetic explorations of topics like thoroughbred horse racing, HIV/AIDS and Germany’s colonial history. 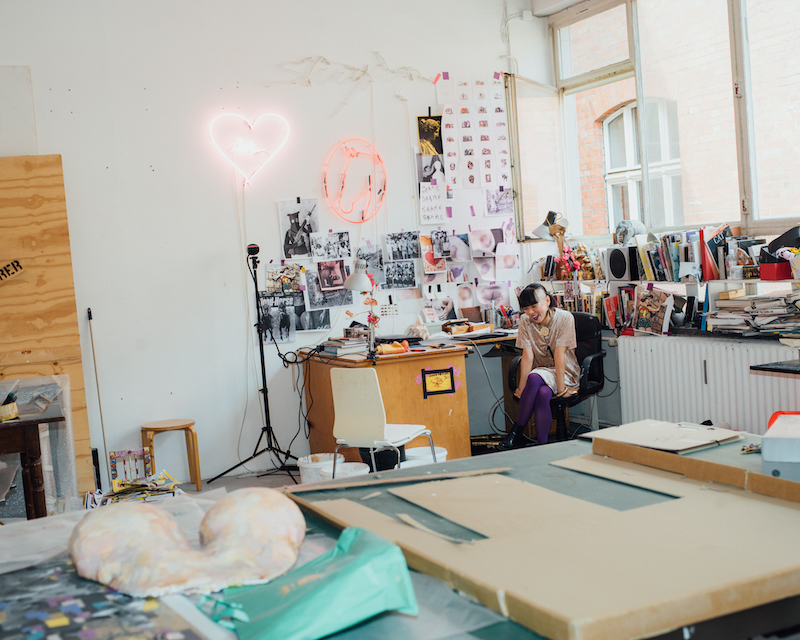 “I like to research a specific topic obsessively and become almost like an expert. It’s almost like being in an intense love affair—you fall in love and then move on and have a lifetime of endless impressions,” D’Angelo says. “The topics I am interested in are very politically-driven, therefore research is an essential part of my process and I take that very seriously.”

Although her work always speaks about deeply-rooted and sensitive issues, D’Angelo has found an unwavering balance between research and aesthetics, never forgoing one in favor of the other. In her 2016 exhibition ‘Winner Takes All’ at Berlin’s Alpha Nova Futura Galerie, for example, she used the framework of horse racing and jockeying to explore notions of societal class and immigration. The 22-minute video ‘Labor of Love’ (2016) documents the lives of three international jockeys based in Germany, each of whom have immigrant backgrounds and sacrifice any sense of family life as well as their own health and safety to dedicate their lives to the dangerous sport. Contrasting the jockeys’ restricted lifestyles, another video screened in the exhibition, ‘Sex, Money, Freaks’ (2016), deconstructs the bourgeois side of the industry by juxtaposing found footage of horses at the auction block, commercials and television documentaries and irreverent quotes from The Simpsons. The auctioneer’s hurried voice and prices surpassing $10 million immediately harken back to art world auctions, inviting thoughts of exclusivity, extraneous wealth and disregard for all things egalitarian. Three years later, remnants of this show linger in her studio: print-outs of jockeys atop horses, mid-jump, are taped to the walls with purple tape; a red neon of a horse’s head that welcomed visitors to the show now hovers above her desk. 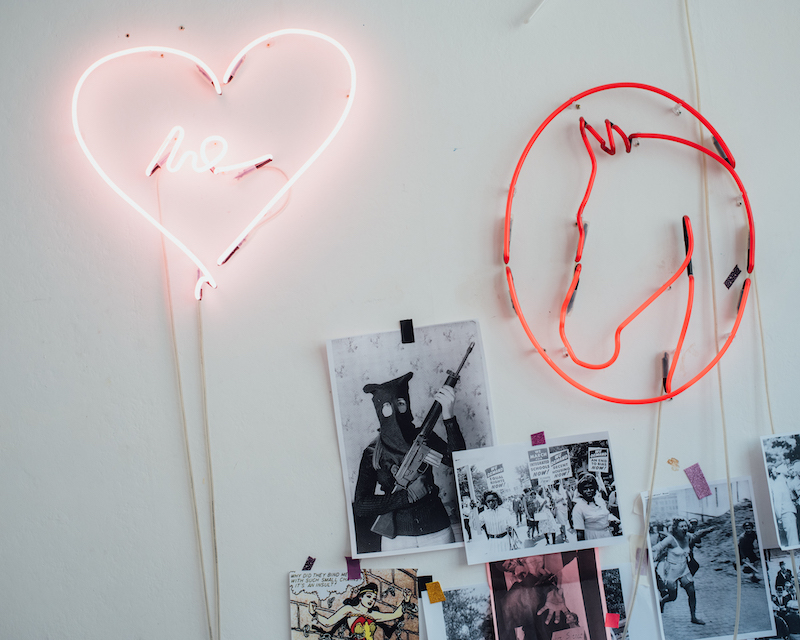 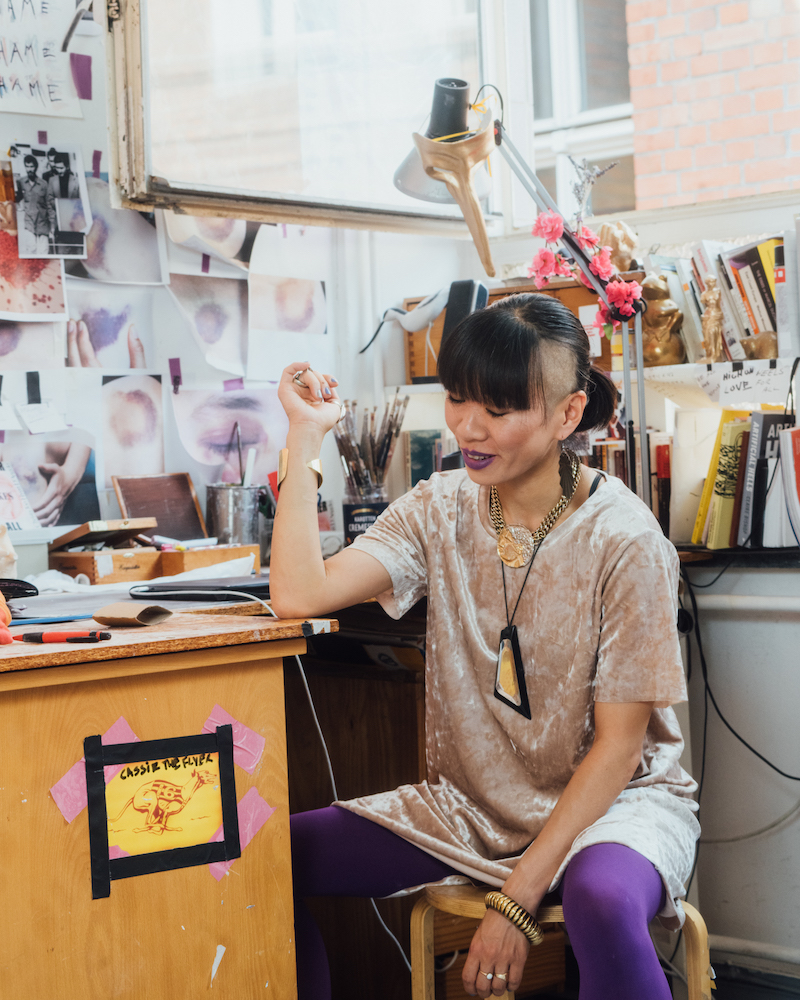 The artist’s use of the horse racing industry to develop a discursive platform that echoes issues of labor and capital faced in the contemporary art market might seem like a random choice, but for D’Angelo the equestrian community is a second home, and immigration issues faced by many jockeys strike a personal chord. Not only is she an equestrienne who travels more than 50 miles north of Berlin almost every Sunday to ride, but D’Angelo was also born in South Korea and adopted by Italian immigrants living just outside of New York City. Her parents were part of the “blue-collar labor force,” she says, and “very hardworking and down to earth.” They neither came from an art background nor were they involved with the humanities, yet they sensed their daughter’s creative spirit and she began attending after-school classes at age six. Come high school, she was accepted into a free summer program at New York’s prestigious Cooper Union, where she developed a work ethic rivalling those of her parents and the jockeys. “We read tons of theory, including Karl Marx, and had long discussions, which, for any 14-year-old, was quite stimulating,” she explains. “I remember staying up until 2AM doing homework on weeknights but I really excelled.” She soon enrolled at the Maryland Institute College of Art and finished her BFA in Krakow, Poland, after which she returned to New York. Feeling discontent with “the commercial art tends in America,” though, she earned and saved money by building furniture and moved to Berlin in 2006. 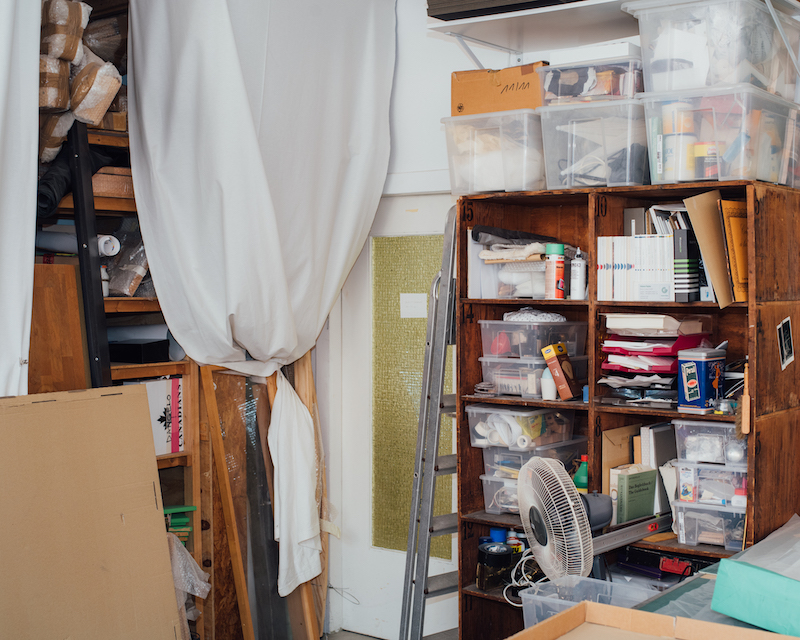 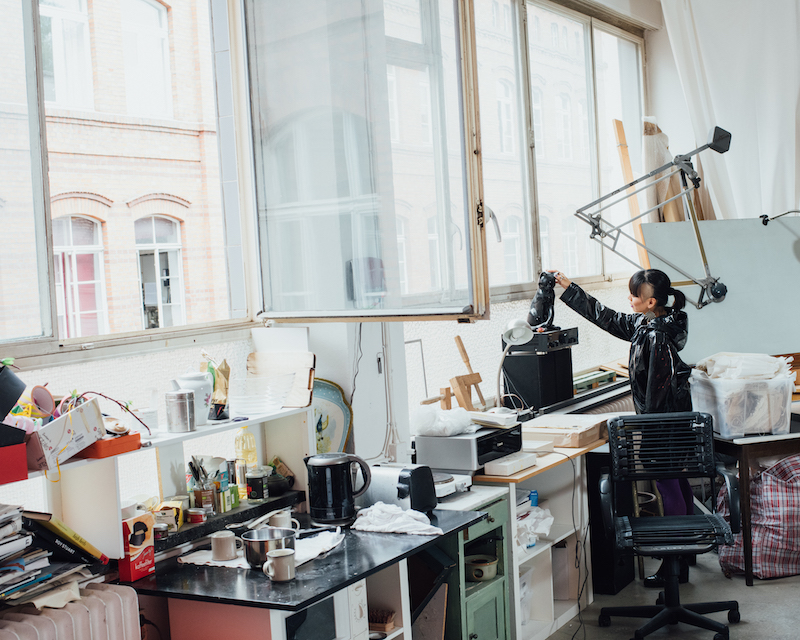 “It’s no secret that Berlin is a magnet for young creatives seeking more space and time with little financial demand, or that it’s a city where anything goes, but when I went to school in Poland it was post-9/11, during the Bush years and America was headed for a train wreck,” she remembers. “No recent art school graduate could afford anything except to be a slave in a 9-to-5 office job or only make work that would sell. I didn’t want that for my future; I didn’t want to make work that was in vogue.” 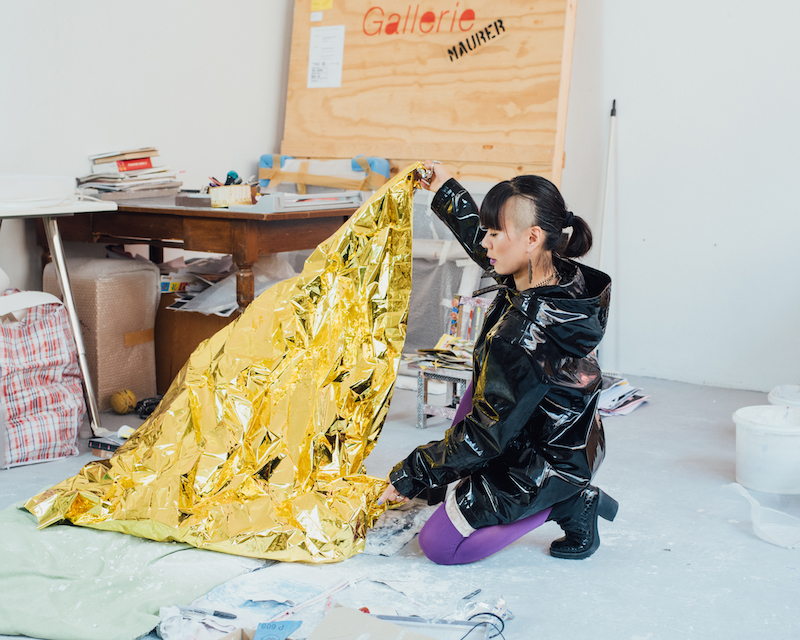 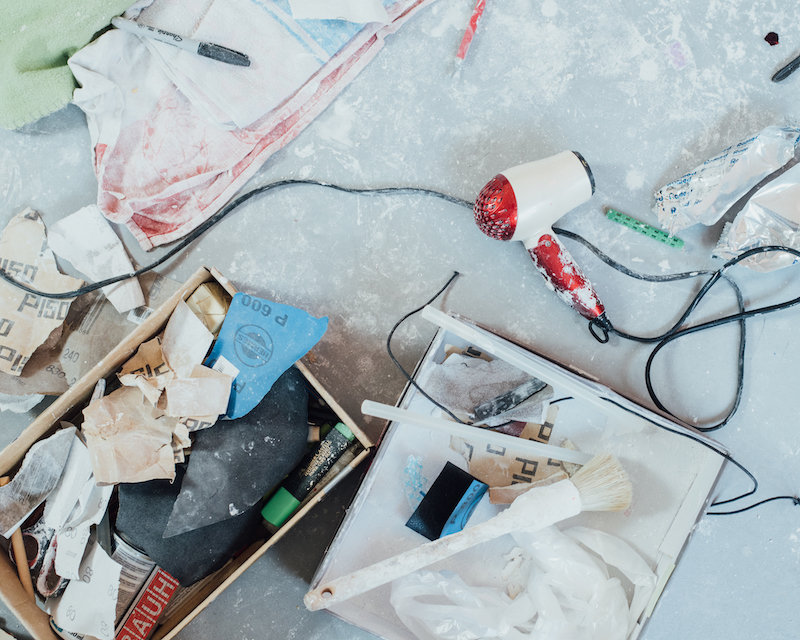 It’s not like anything has changed in the recent Trump years (if anything it’s gotten worse), Berlin is still that place where anything goes and D’Angelo’s artistic trajectory is as relevant as ever. Her first Berlin exhibition, ‘100% NEPALM,’ at Kuma Galerie in 2010, showcased 100 explicit collages that critique the media for being an overbearing force that only helps propagate utopian ideals—a topic that nine years later remains equally as relevant. And when we meet at her studio, she’s just finished wrapping up everything for a forthcoming exhibition, ‘Ghosts,’ at Galerie im Turm, which will turn the critique toward a feminist investigation of interpersonal relationships, specifically female sexuality and misogyny. Among large-scale sculptural works and a neon, there will be a new video titled ‘Protest and Desire,’ which portrays Lillian, a Ugandan HIV-positive woman who emigrated to Germany. 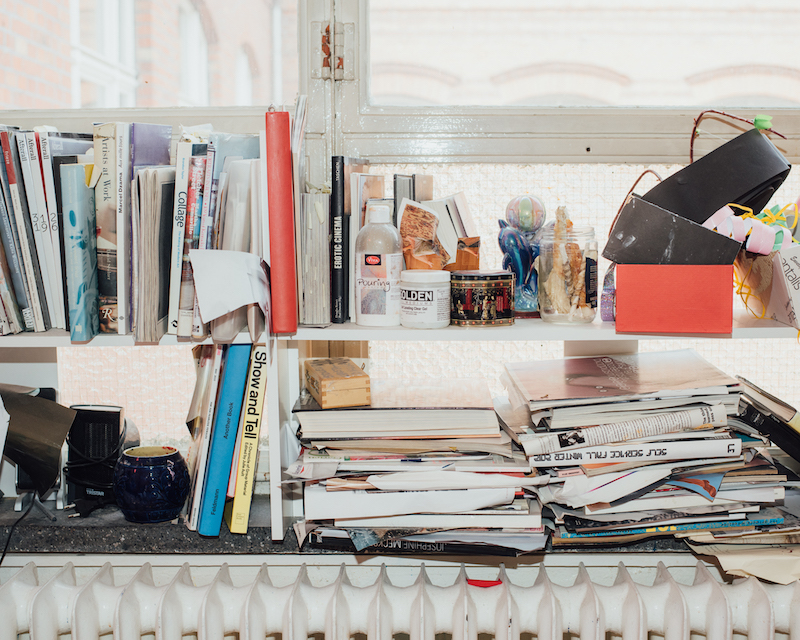 ‘Ghosts’ is an expansion upon research that D’Angelo began years ago and that also appeared in work shown last year at Galerie Sprechsaal. The group exhibition ‘Breathing the Ultimate Wave / Feminism and Class’ featured D’Angelo’s sculpture ‘Heartless’ (2017), a giant gold necklace with a broken heart charm hung across a wall that was covered from floor-to-ceiling in Xeroxes of black-and-white collages. The collages combined found imagery with classical art historical references and Wonder Woman comics—print-outs of which cling to her studio’s walls, also with purple tape—to simultaneously allude to sexual identity and desires as well as female suppression.

“Relationships, in respect to women, have always been imbalanced when they involve power dynamics; misogyny is part of this constellation,” D’Angelo says. “In this regard, these works confront a sanitized version of love and desire and crudely illustrate the brutality that often accompanies relationship aspirations to be ‘unconditionally bound.’” 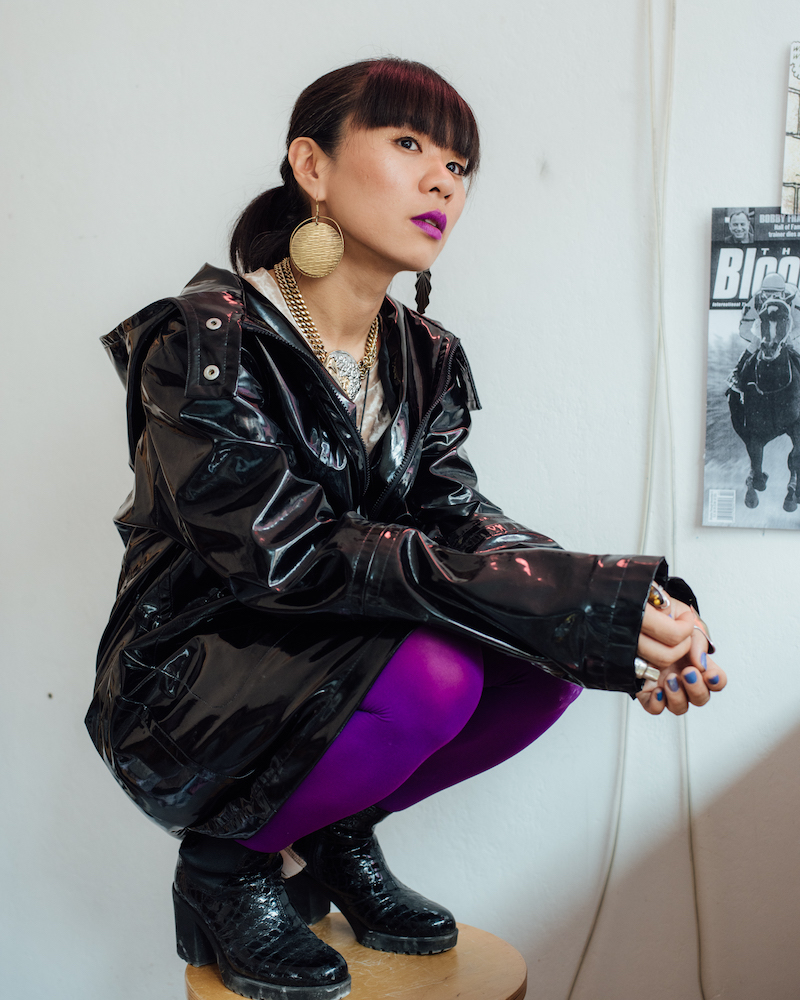 Similarly, in 2014–15, she made the video ‘Past Present Tense,’ which brought the harsh reality of racism in Germany into very clear, very bright light. Yet before she was able to strike a successful balance between such sensitive research and aesthetic components, the artist admits that she first made “a lot of bad work.” She continues to explain that “failure is a necessary part of any practice and I’m happy I made a lot of hideous work.” Returning to the idea of food, but not just how it can carry political meanings, she compares developing her artistic practice to the process of becoming a chef. “[Learning to make art] is like learning to cook,” she tells me. “You need to practice and understand how ingredients function and mix. You fail and make a lot of inedible stuff, but you learn from that process of failure.”