‘speed’ is Heike-Karin Föll’s first institutional solo show. On view at KW Institute for Contemporary Art until September 1st, the exhibition is an overview of the Berlin-based artist’s various groups of work. Largely dealing with the themes of brevity, recontextualisation and materiality, Föll reduces text, painting and drawing to their very essence: the line.

In ‘Anita Pallenberg’ (2013), Föll uses flowers, leaves and stems to write out the name of the German-Italian actress, artist and model who had her heyday in the 1960s and 70s. The piece is part of the series ‘Kafka’s Gymnastics’, where Föll assembles the names of unrelated historical figures using plants found in urban environments. Using scotch tape, the artist delicately constructs the lettering to make them look like gymnastic poses. The result is feminine and colourful, with the large, wobbly lettering not leaving enough space for ‘Pallenberg’ to fit across the paper comfortably; her surname is forcibly split in two. The piece would have taken a certain delicacy to produce and the use of flowers romanticizes the names on the page, but they also highlight the speed with which the condition of the flowers will inevitably worsen. 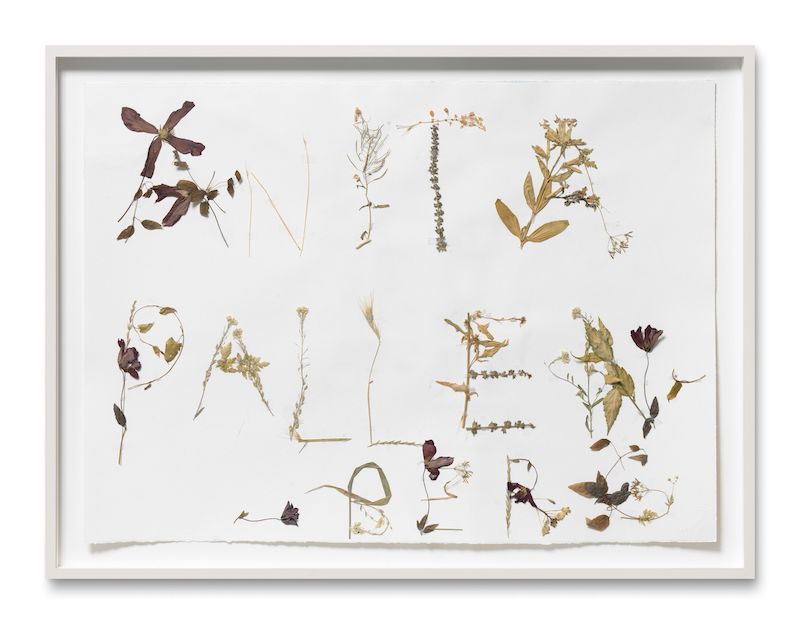 ‘Anita Pallenberg’ is placed on a plexiglass wall that interrupts the space and the natural flow of the exhibition, emphasising the way the exhibition space itself has been recontextualised. There are hidden walls and even a hidden corridor, so it is easy to overlook work unless the viewer is curious enough to peek in concealed corners and spaces. For instance, one of the very first pieces in the exhibition, ‘Installation (Detail)’ (1993), is presented to the viewer behind a wall upon which hangs a much larger piece. The A4 print is a photograph of an installation where the words “my brother my lover my professor my doctor my father” are presented in bold, black text on a wall. In the photograph, you can also see a large amount of light hitting the piece, as well as the shadow of another artwork. By placing the rather small print on the very edge of the wall and opposite a window, it could easily be misinterpreted as a generic building sign, something more likely to interfere with the viewing of an exhibition as opposed to something that is intended for it.

Likewise, ‘Tangled’ (2019) is presented on an easily overlooked wall panel, until the very delicate twisting and turning yellow lines on an iPad screen catch one’s eye. Here, 3D animation mesmerises the viewer with a representation of Rapunzel’s hair, each line very fine and carefully placed, highlighting the almost tortured brevity of the artist’s practice. She has stated she was interested in Disney’s representation of the 19th-century German fairytale and made it appropriate for a new audience. 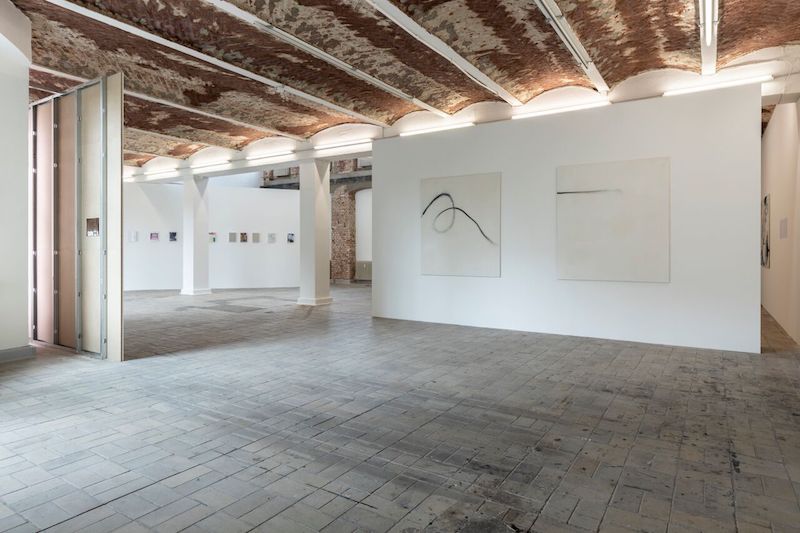 Föll is an artist who constantly goes back to her own work and tries to recontextualise it, something that is certainly evident in ‘speed’. Her works tend to be minimal, leaving plenty of space to find new meaning. While several pieces are displayed so the viewer will have no trouble seeing them, throughout the exhibition there is also the sense that one must view the space anew.