Catalysed by an open call for Berlin-based artists, the performance event ‘Manifestos for Queer Futures’ premiered at HAU’s multi-venue festival, ‘The Present is not enough. Performing Queer Histories and Futures’, from June 20th to 30th. From the 270 applications received, HAU produced 26, bringing together artists who regularly perform in clubs, theatres and art spaces with those who may have never set foot on stage. Over three consecutive nights, ‘Manifestos…’ sampled the profusion of Queer cultures in Berlin. 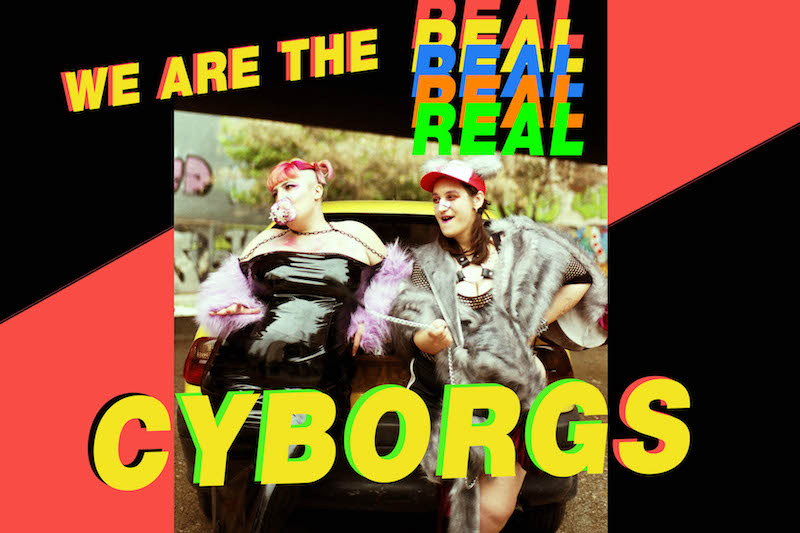 As a literary form, a manifesto is a declaration of intentions often issued by a political party or organisation. Each night, HAU’s program unfolded as a series of ten-minute performances that put forth a range of bodies, identities, issues and methodologies. On the opening night, the audience entered HAU2’s theatre to find Orlando de Boeykens seated on stage and puffing into a tuba. Boeyken was part of a trio alongside the performers, poets and musicians Tucké Royale and Hans Unstern, who presented the first manifesto, ‘The Revolution Will Be Injected.’ Opening with a song, the leggy and bearded Unstern in a tight blue dress, stockings and heels, rattled a container of syringes, which were soon put to their intended use. When the denim-clad Royale turned his back on the audience, dropped his cut-off trousers and began to recite a poem, Unstern injected him in the ass, presumably with testosterone. A third song ended with a repeated refrain about “taking T at the truck stop,” concluding an intimate and entertaining account of the group’s rituals and tribulations. 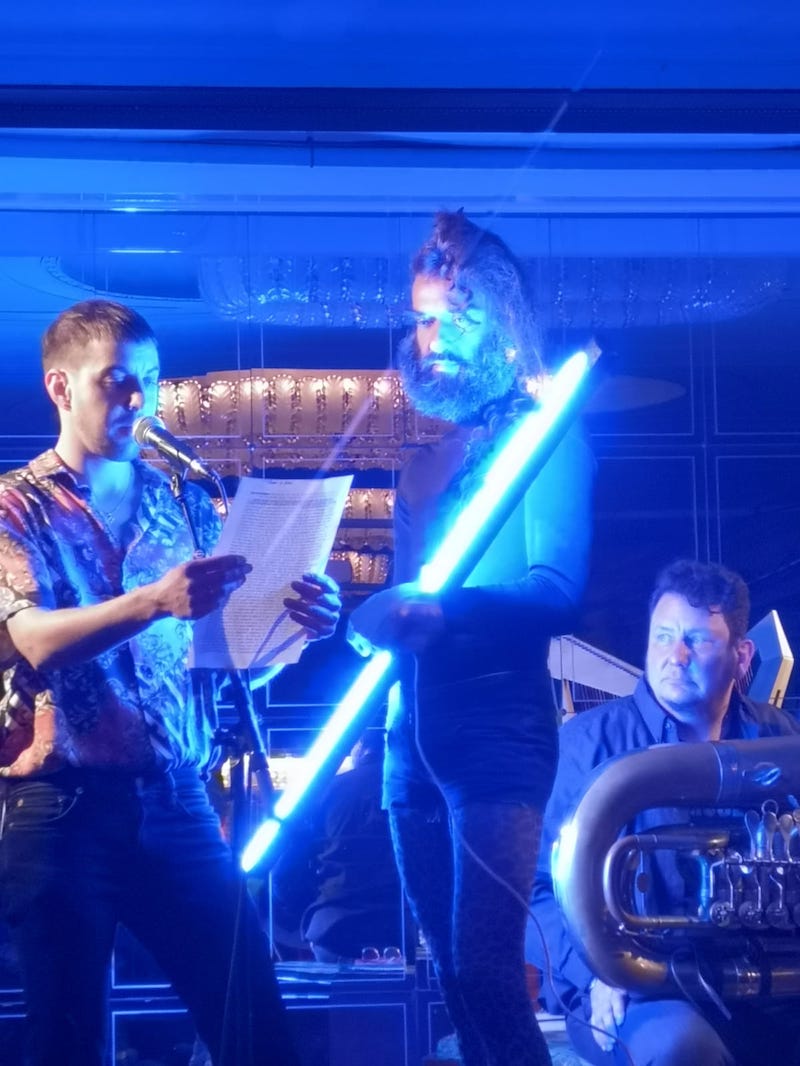 The stage lights went down for a quick change over, then an image of a black figure overlooking a sculpted garden of hedgerows and paths appeared projected on the back wall. From the wings, Isaiah Lopaz stepped into the spotlight to issue an unequivocal critique, ‘There Will Be No Acceptable Casualties.’ More a jeremiad—a list of complaints—than a manifesto, the piece spoke of the casual racism Lopaz, a US national who has lived in Berlin for more than a decade, experienced in the streets, at work and also amongst the Queer community in the city. Lopaz’s performance effectively extended a project the artist has gained some notoriety for since 2016, a series of portraits taken in the streets of Berlin in which the artist wears t-shirts that reflect some of the racist statements that have been directed at him, such as: “I didn’t know you are gay, you are Black” and “A Nigger is the same as a Nazi.” 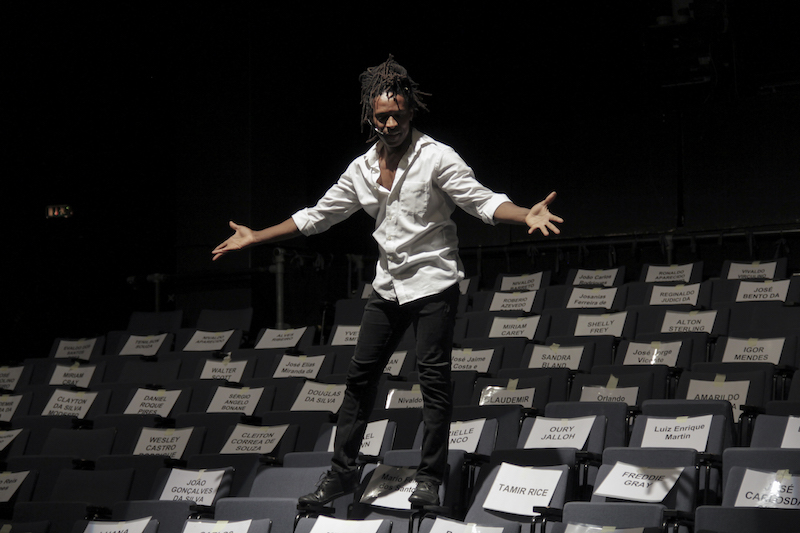 Developing this issue of race, on the second night the audience re-entered the theatre following the intermission to find all the seats had placards affixed to their backs which bore names, including the murdered queer Black Rio councillor, Marielle Franco. With the audience clustered on the stage, choreographer and dancer Ricardo de Paula, a Brazilian emigré, prowled across the seating rows-cum-memorial for Black people killed by police violence. ‘Out of Many, ONE!’, concluded with de Paula, urging the crowd to sing along with celebrity Samuel L. Jackson, in his 2014 video challenge in support of Black Lives Matter: “we ain’t gonna stop til people are free.”

It is notable that a number of Berlin organisations are promoting the concerns of queer Black people in Brazil, who are under attack by the country’s authoritarian Bolsanaro government. Alongside de Paula, ‘Manifestos…’ also included contributions from Quilombo Allee, Iury Trojaborg (with Ming Poon) and Sanni Est, who all addressed the interacting violence of race, colonialism and gender that shaped the struggles and ambitions of many queer Berliners from Brazil. Pêdra Costa’s manifesto, ‘de_colon_isation part VI: inbodiesvisibleborders,’ was a live video performance in which the artist offstage, presented her body projected on screen in extreme close-up. Her close-mic’ed breathing was looped and manipulated, building to a climax that announced: “you belong to the south of the world, to the butthole of the body.” It is a phrase from the artist’s ‘The Southern Butthole Manifesto,’ a tongue-in-cheek, anti-colonial rebuttal of Brazilian modernist Oswald de Andrade’s ‘Manifesto Antrópofago’ (Cannibalist Manifesto). 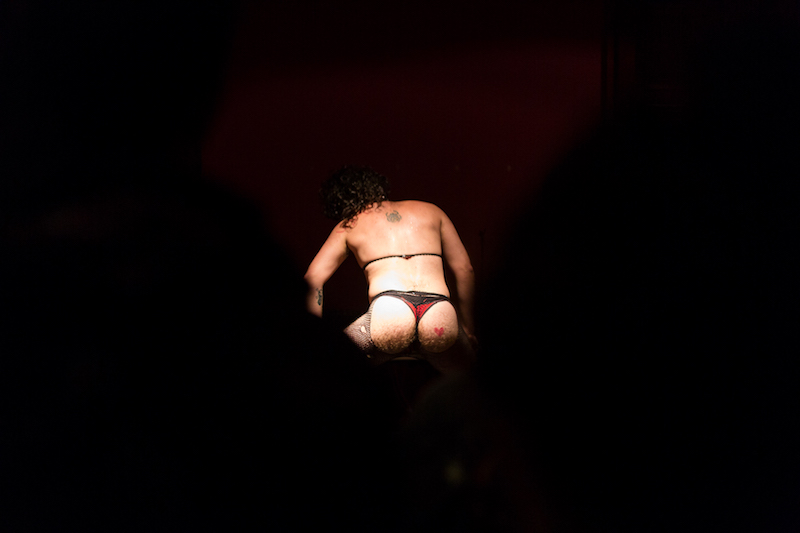 According to the festival’s keynote lecture by theorist Sara Ahmed, disrupting the normative reproduction of the world to make other kinds of spaces, identities and sociabilities possible can be understood as a form of complaint. ‘Manifestos…’ presented queer artists with an opportunity to be vulnerable on an influential Berlin stage. While such forms of representation might feel cathartic, celebratory, empowering—even liberating—they emphasise the fundamental social structuring that directs violence towards gender-queer people.

While ‘Manifestos…’ raised the visibility of queer multiplicities in Berlin, Romily Alice Walden used the platform to emphasise her invisibility. Walden’s ‘Notes from the Underlands’ was delivered as a text-based video from the depths of Queer-Crip culture to the able-bodied majority assembled at HAU. The video’s text-to-speech soundtrack exclaimed “No Shame in Sickness!” and goaded its audience by observing: “your body is DECAYING too, your body is getting older as you sit and process this.” Declaring that “as the planet becomes sicker, we all become sicker,” ‘Notes from the Underlands’ foresees an inclusive, body-hacked, self-medicating and co-dependent future as a care-giving utopia. 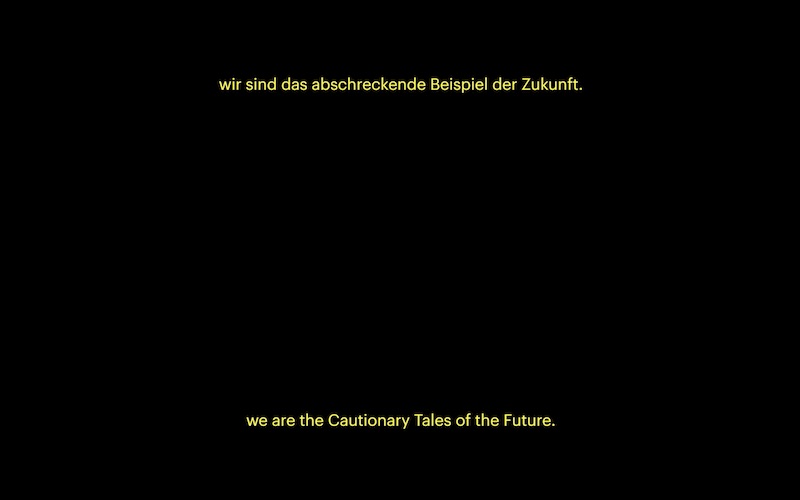