For this year’s Sofia Art Week, Æther—an independent art space in Sofia, Bulgaria led by artist Voin de Voin—will host a program of screenings, performances, lectures, installations, workshops and public interventions around the topic “Great, but Late?” from July 15th to 22nd at various locations in the heart of the city. The event will examine the acronym of Sofia Art Week, “SAW”, as in the simple past tense of “seeing” or “to see” and the tool for cutting, with long teeth along one edge. Combing the meanings of this abbreviation, the festival seeks to explore the question: what do we need to lose/chop/cut in order to see through and truly begin?

The first part of the project, titled ‘All Rights Reversed’ and one of this year’s most anticipated series of events, will take place at Resonator, a co-innovation space hosting a series of physical labs that aims to foster cooperation between different creative and tech spheres. Using 3D printing technology and audience participation, a new printed artwork will be created. Additionally, visitors will be invited to take photos of Lyubomir Dalchev’s sculpture ‘Woman with a Jar,’ a piece purchased by the Sofia Art Gallery in 1975, during one of the institution’s most active collection periods. The goal of this participatory project is to understand the context, history and ambiguity behind this case, through a series of lectures and talks with professionals in the fields of social science, law, art, and architecture, to illustrate the state of copyright laws in Europe, particularly in Bulgaria. The second part, led by artists Ivan Moudov and Julien Fargetton, will take place in Sofia’s urban environment and will result in the development of public artworks. 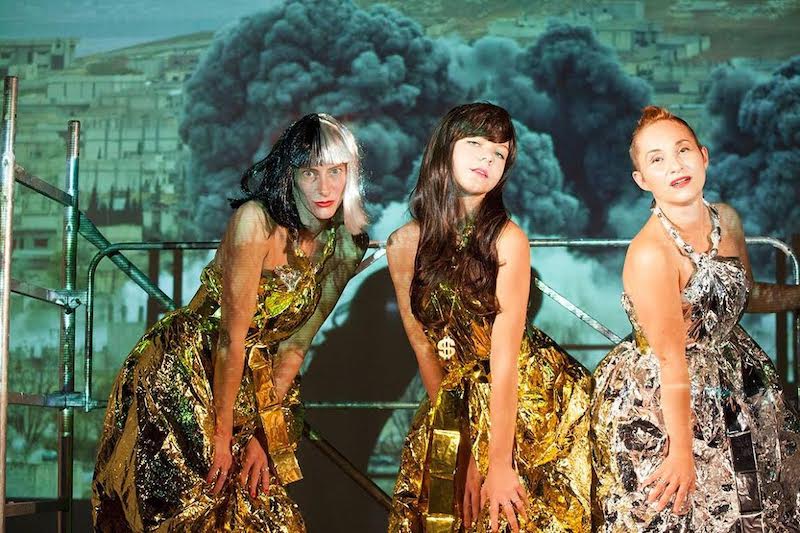 Further highlights from the festival include Boryana Rossa’s ‘Golden Carelessness,’ a performance inspired by media images of Melania Trump produced after the Puerto Rico hurricane, as well as a photo of Ivanka Trump, dressed in a silver foil-like dress, posted on the night of the first Muslim travel ban. The photo of Ivanka quickly became an Internet meme, juxtaposed with an image of a Syrian migrant girl covered in a silver foil emergency blanket. It is this explicit contrast, the detachment from reality illustrated by the images of those in power versus those who are powerless, that is embodied in Rossa’s performance, which recreates the dynamics of these internet photos in the context of the gallery space at Port.A. In the performance, Boryana and her model assistants take selfies in emergency blankets against a backdrop of images related to the war in Syria and viewers are encouraged to do the same.

Sofia Art Week seeks to stimulate a creative ferment of social engagement, aiming to spark a dynamic exchange between artists and audiences across a range of perspectives on current political, social and artistic movements. The series of events will concentrate on diverse topics, including the growing threats to democracy in today’s “Post Truth” era and contrasts between pervasive societal divisions, from hyper transgressions on the Right to calls for self-policing on the Left. The festival is looking for a new common language for an international dialogue. The week-long event expects to foster new connections, experimentation and to probe the questions: can we surprise ourselves? Which is more valid as truth, what someone tells you, or what you experience by doing? Can we see beyond and through?