‘Nel Mezzo’ is the latest exhibition at Tanya Leighton and explores the work of American artist and political activist Sharon Hayes. The show consists of two video installations and the artist’s most recent work, ‘Come Out!’ (2019). The title of the exhibition translates from Italian as “the middle” and stems from the saying “nel mezzo del cammin di nostra vita,” meaning “midway on the road of our life.” ‘Nel Mezzo’ is an examination of gender, sexuality and contemporary collective identifications and presents these topics in the form of vox pops. 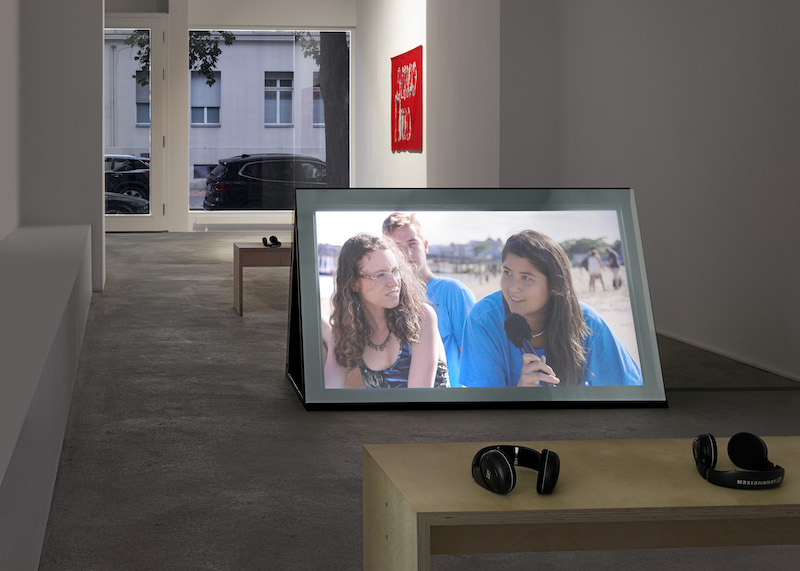 Hayes’s ongoing video series ‘Ricerche,’ which translates to “research work,” is presented for the first time in Germany. The project is composed of multiple video works that use filmmaker Pier Paolo Pasolini’s ‘Comizi d’amore’ (Love Meetings) as their base. Pasolini was a controversial figure throughout his career and focused many of his works on sexual taboo. Hayes revisits his film and borrows his interview questions in ‘Ricerche: one’ (2019). The piece is composed of two videos and explores themes surrounding family and gender. All participants are children of queer or gender-nonconforming parents, split into two age groups. In the first video, Hayes asks the younger group, which consists of 5 to 8 year olds: “Where do babies come from?” Many of them blush and giggle. Their awkward, embarrassed reactions are repeated on the opposite screen, when a group of young adults are asked: “Do you know how families are made?” The discussion is personal and surrounds experiences of children born from donor inseminations and blended or collaged families. 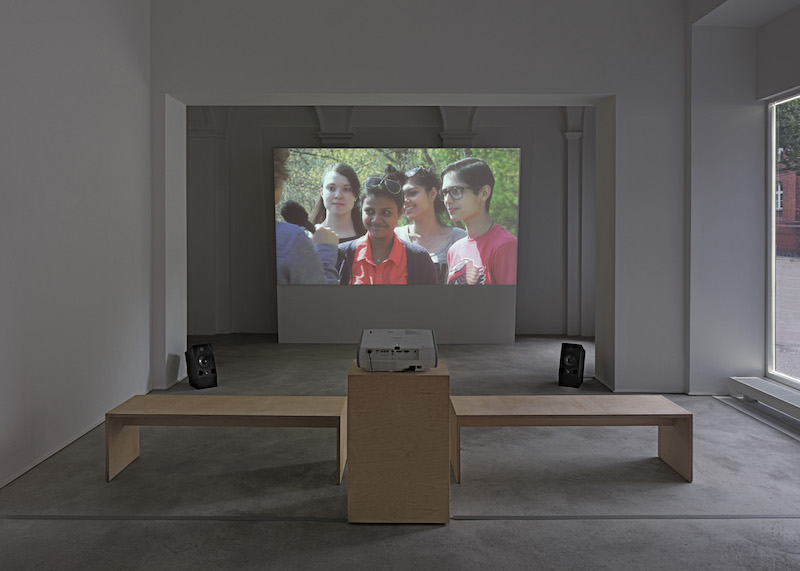 The piece is reflective and questions our views on traditional family setups, as well as rights for queer or gender-nonconforming people in relation to creating a family. Hayes explores why there is so much pressure to succeed placed on these atypical family structures, when in fact all families go through difficult periods and trauma without the same level of judgment being placed on them. Hayes’s approach to the topic is thoughtful, as she has gathered these young people together and helped them connect with one another as if they are a family themselves. The piece speaks to the larger ways in which we form ourselves as people in relation to collectives and questions our understanding of who and what we consider family. 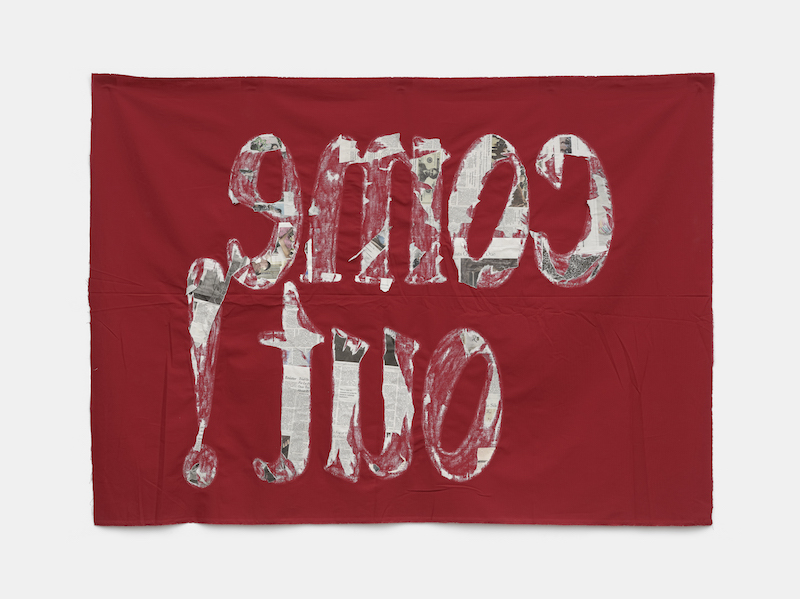 The textile banner of Hayes’s newest work has the words ‘come out!’ stitched on it and is presented backward, with the text bleeding through the fabric. Newsprint from the week of June 15th, 2019 and US dollars are stuck to the text using acrylic paint, creating a snapshot of this recent time in history. The text creates a sense of urgency and the use of deep red and newsprint makes it feel deeply political and historical, despite being mere weeks ago. The piece was inspired by the radical political magazine of the same name, published by the Gay Liberation Front during the aftermath of the Stonewall Uprising. The GLF often used the magazine as a recruitment tool and as a protest banner, and the directness of the command to come out is enhanced by placing it on an actual protest banner in such a large format. Hayes herself is very vocal about her sexual orientation and many of her works surrounding gay rights are presented in the form of a protest. 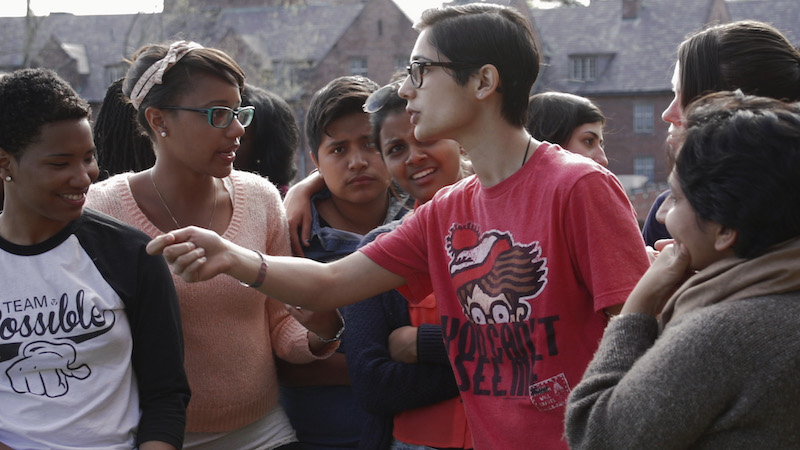 The video installation ‘Ricerche: three’ (2013) takes place in an all-women college in Massachusetts. In the last decade, the college has faced the increasing necessity to accommodate students who change their gender from female to male during their studies. Hayes asks the 35 participants Pasolini-style questions, such as “Is sex in America different to sex somewhere else?” and “Do you have the same kind of sex as your mother?” The diversity in culture and sexuality in the group of participants brings forth a range of ideas and opinions on sex, feminism and gender. While watching the students erupt into a debate, the ideas surrounding these topics feel slightly dated. The film gives you a glimpse into how these issues were discussed only 6 years ago and prompts a reflection on how fast ideas of sexual freedom and gender norms are evolving.

Despite heavy references to Pasolini’s films, Hayes’s work is not an attempt to recreate the old and conjure nostalgia. Her intent is to show the marked development in our ways of thinking. She revisits old artworks and political texts and reinserts them into present discourse. ‘Nel Mezzo’ highlights the way in which her work focuses on language as a tool for collective subjectivity.