On July 22, 1958 Carl Andre sent a postcard to Nancy Holt and Robert Smithson. The photograph on the front depicted a verdant aerial view of Aspen, Colorado—a medium-sized town nestled in the Rocky Mountains. Addressed to New York City in mid-summer, the message on the back offered brief enticement to come West. “Aspen is naturally air conditioned,” he wrote, “cool & dry. Stop by.” Furthermore, “The geology is incredible—silver, coal, marble, oil shale, basalt, sandstone, slate, gypsum, molybdenum, iron ore—a mountain of each.” Aspen is a mining town, the postcard’s caption informs us, built up by the late nineteenth century silver boom. Seen through the eyes of an artist, the mountains appear as great piles of minerals and precious metals, raw materials already separated out from the tangle of nature. Where capitalism spied a great store of commodities, Andre’s prospecting gaze identified a landscape latent with minimalist sculpture. Even his account of the weather befits a museum’s climate-controlled interior. 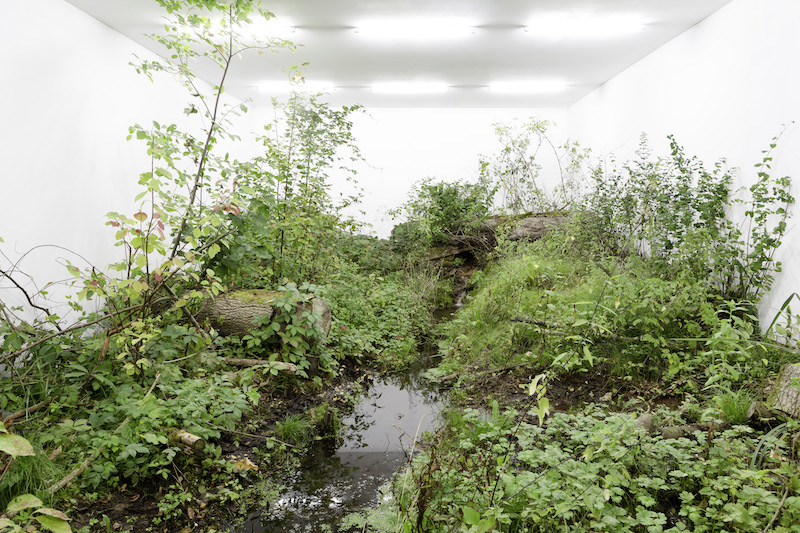 The artist’s perspective transforms the landscape—sometimes without even lifting a shovel. Whereas the likes of Smithson, Michael Heizer and Richard Long are known for massive earth-moving projects, Holt’s 1976 installation ‘Sun Tunnels’ and James Turrell’s ‘Skyspaces’ demonstrate the exquisite force of directing our gaze through a carefully positioned aperture onto the world. Others have seen fit to distill the landscape to its essence and bring it indoors. In 1976 Walter de Maria filled a room inside a New York gallery full of earth. Later, Olafur Eliasson pressed Land Art’s unresolved dialectic between the museum and the great outdoors further, forcing visitors not merely to look at but to traverse gallery floors covered with stones, ice and fog (‘The very large ice floor’, 1998, ‘Lava floor’, 2002), even reconstructing a running stream in ‘Riverbed’ (2014-15). Indeed, as traces of human activity cover ever more of the planet—its strata, oceans and atmosphere—the walls of the museum thin. 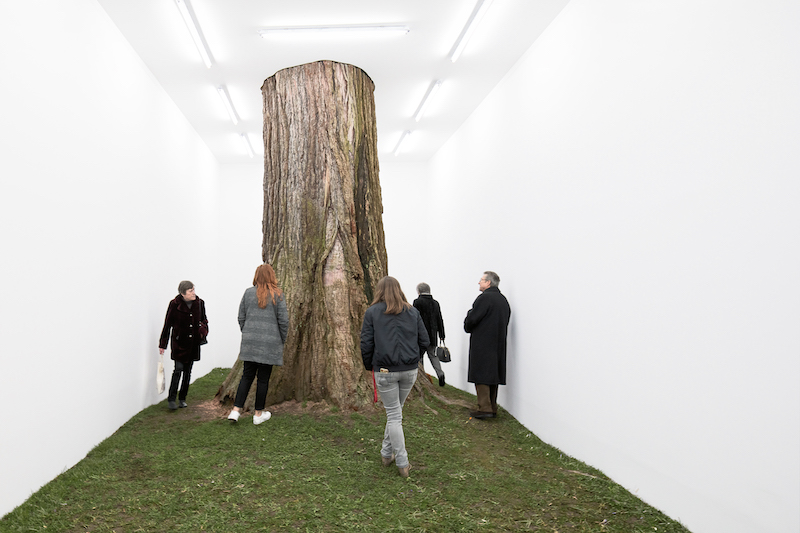 At 52°33’44.1”N 14°03’12.8”E, a precise Global Positioning System coordinate, visitors to the opening of Fabian Knecht’s ‘ISOLATION’ will have their blindfolds removed. They will find themselves standing on muddy ground amidst fallen tree trunks and low growing shrubs, surrounded on all sides by a stark white cube. Without any way of knowing whether the gallery has been overgrown or built up around a patch of forest, they will wander. The smell of damp earth in their nostrils. Venturing beyond the first enclosure, they will enter a corridor, then a second room, where the sound of running water leads along a stream towards a small waterfall, whose pool offers a rippling reflection of harsh fluorescent lights overhead. Here, every leaf is thrown into sharp relief; muddy hues appear ultra-saturated. Eventually, they will depart the enclosure and discover that it is a temporary structure set within the forest outside Buckow, Märkische-Schweiz, across the lake from the Berthold Brecht house, in a region known for its curative walking paths and Kneipp spas. Having spectacularly put the visitors ‘into the picture’, both literally and figuratively, Knecht’s epic “total installation” flips the switch, to stage an exit from the kind of Wagnerian Gesamtkunstwerk discernable in ‘Riverbed’. In experiential terms, ‘ISOLATION’s dramatic emphasis proceeds from the visitor literally taking leave of art(ifice)—moving through the artwork out into the world. Breaking the fourth wall, the work asks them to look for a fifth. Stepping out of the Potemkin gallery and into wild surroundings, an uncanny afterglow clings to the forest floor, now illuminated by the softer light of the sun filtering through the trees. It is as if everything looks different. 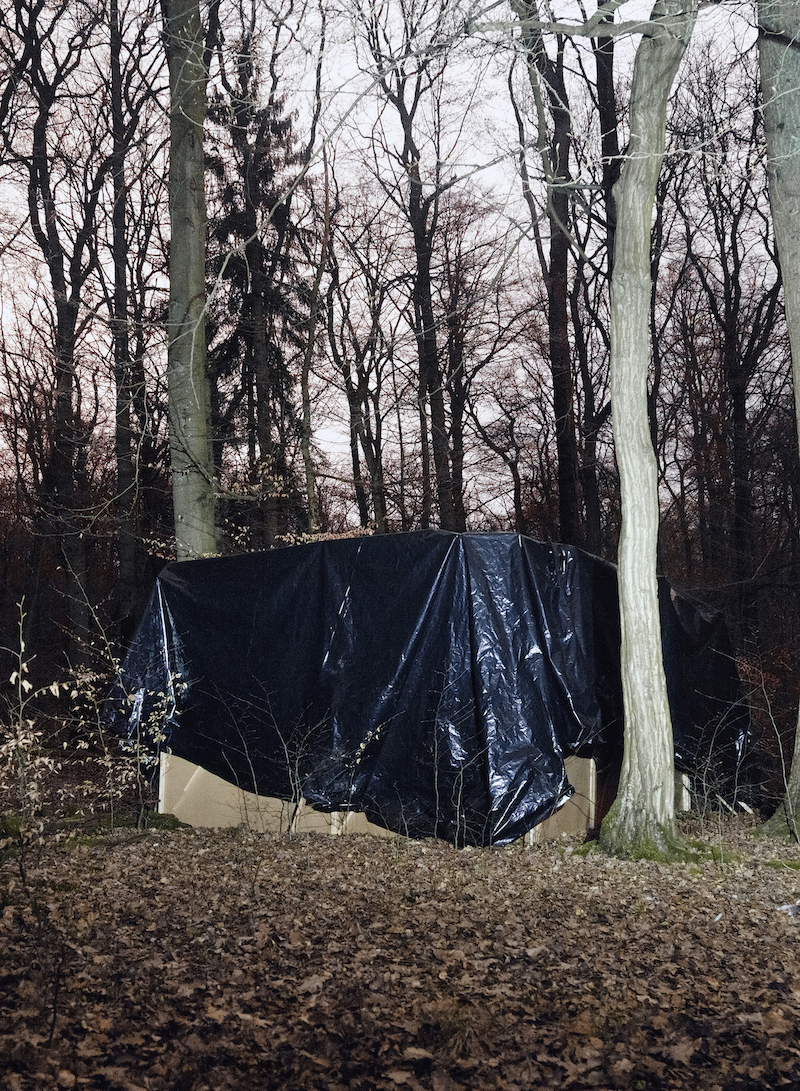 In its previous iterations, Knecht’s ‘ISOLATION’ series has involved white-cube gallery spaces built up around a rectangular swatch of land, installations that double as a photographic portrait studio for the ground-as-figure. Beginning with a truncated fragment of a landscape, the logic of this ubiquitous framing device echoes outwards—the structure built around it, the frame of the camera viewfinder, leading to a photograph of its interior; the frame of the photograph (with its own reflective glass surface) now hanging on the white wall of a gallery whose form is repeated ad nauseum in the temporary architecture of the art world, from fairs and biennales to museum shows. The boxed scenes of these installations vary and trick the eye. A luscious field of wildflowers once receded into infinity in perfect one-point perspective. In another circumstance, a grassy swamp offered a perfect mirror reflection of the gallery space. A snow-covered stretch of a piled-up ice flow was clearly selected for its resemblance to Caspar David Friedrich’s iconic ‘Eismeer’ (1823/24). (One wonders how far the artist and his crew had to wander the Russian winter in search of that vantage point, how his eye had to squint, and how the camera had to be trained at just the right angle, height, and time of day, to catch the resemblance.) Knecht presents us with the workings of a frame or what Jacques Derrida, in ‘The Truth in Painting’ (1987), calls a parergon, “a form which has as its traditional determination not that it stands out but that it disappears, buries itself, effaces itself, melts away at the moment that it deploys its greatest energy.” In doing so, he performs a Verfremdungseffekt calculated to situate us seductively—yet uncomfortably—within the overbuilt and over-mediated landscapes of the Anthropocene and the artworld alike. 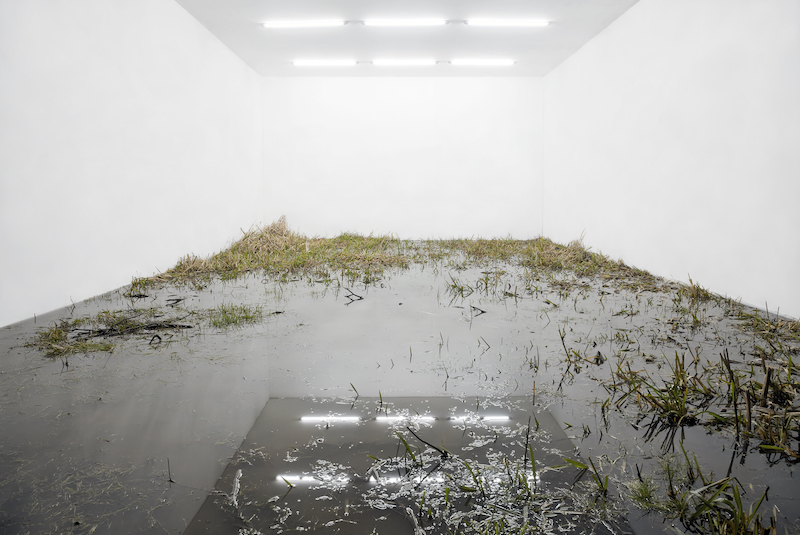