Entering the dome at Mariannenplatz, the outdoor world is suddenly muffled as we are immersed in suede darkness. The audience is presented with velvety blue benches, single-person chairs and a large circle much like an enormous ottoman that allows complete recumbence and, consequently, the best views. The “immersion” aspect of the dome is immediately apparent: not only do the visuals engulf us, but the audio also enfolds from all sides. It is not possible to view the work all at once, the very nature of the dome entails that the eye cannot see all angles simultaneously, creating a visual and sonic sense of immensity, or the titular “infinity.”

In ‘The Happiest Thought’, Agnieszka Polska poetically explores the largest known mass extinction in Earth’s history between the Permian and Triassic periods, more than 250 million years ago. We are led through the moment just before the world was fraught with lava and fires, the air suffocating with smoke and smog, yet the work is imbued with a calming energy. Polska uses Albert Einstein’s “happiest thought”—the elementary thought that inspired him to formulate his theory of relativity—to begin her visual essay: “Imagine a workman standing on the roof of a house and losing their footing. As he plummeted in free fall, everything within his grasp (A toolbox, for example) would plunge with him. Therefore from his local perspective gravity wouldn’t seem to exist.”

In part sung and narrated by US-American performance artist Geo Wyeth, the soundtrack is a disembodied voice guiding us through this digitized prehistoric terrain. Polska spends time on each successive image, enabling us to reach a quasi-meditative state as giant dragonflies fly in synchronized patterns overhead, or as we stare at sunlight through rippling water, embraced by the warm waves. Starting at the top of the dome, digital waves wash down over the audience, the work ending with an abstracted face in the ceiling, welcoming us home. We feel safe, while simultaneously being reminded that we are doomed to drought, floods and fires, the prehistoric mass extinction an unheard and unheeded prophecy. It is pertinent timing for the work as we are thrust into our current climate crisis. 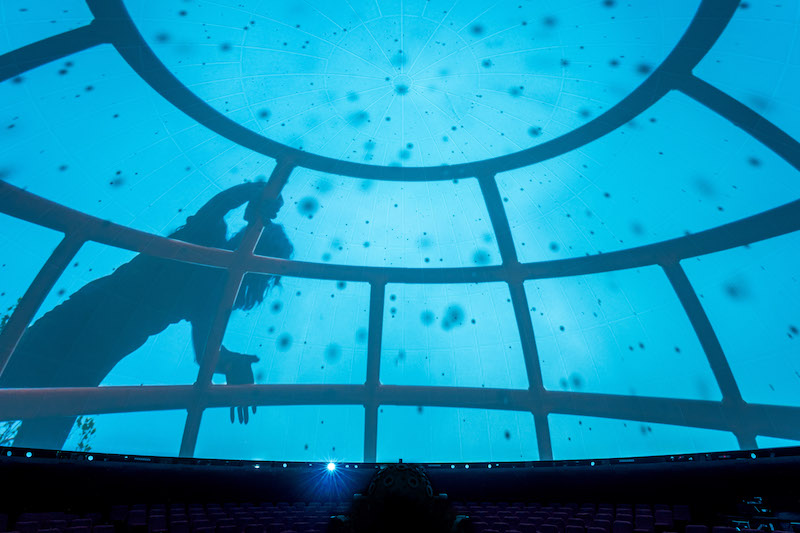 Design collective Metahaven re-imagines the myth of Elektra, presenting a tangled narrative that does not conform to linear imagery or a cohesive plot. The work amorphously fluctuates between digital and real, with tendrils of each snaking into the other: animated snow floats down on our faces in a live-action playground. We are twisted and turned through the work, the present is not the present without also gesturing to the past. There is no circumscribed beginning, middle and end: a child plays on a dome, climbing over our heads repeatedly; a child walks through the forest, circumnavigating the dome, looking offhandedly back at those watching; a child plays with a cat’s cradle, her hand tangled in the string. In this way, the film is also cyclical: we are brought back again and again to a solitary child in various milieus and to animated knots, a visual representation of the tangled narrative. 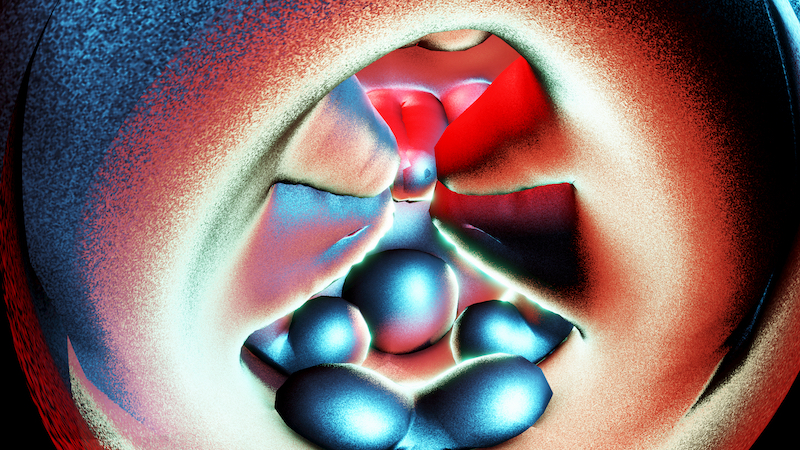 In ‘Non-Face’, Robert Lippok and Lucas Gutierrez create a world of non-manifold geometries that float through space, monolithic and slow. These “fake objects” are sophisticated digital forms that do not and cannot actually exist in the physical world. They are at once alien and familiar, their metallic, dimpled geometric appearance akin to an electron or neutron when zoomed in on a microscope. In animation, these forms are created via mesh-mistakes, which the artists distinguished in their own praxis and further elaborated in ‘Non-Face’. These beautiful and strange beings seem to move autonomously, glinting in a permanent cosmic sunset. As these digital megaliths glide through space and ripple across the dome of the makeshift planetarium, they are accompanied by a chorus of low and resonating instrumentals, created by Robert Lippok as a musical transcription of the 3D forms. The sound is crucial to creating the atmosphere of the work. We are carried through a digital landscape with every reverberation. As the music rises to an operatic crescendo, the floating forms appear charred and blackened.

When in the dome, instead of considering the cosmos, we are contemplating infinity through the lens of contemporary art, which, in its own way, also raises questions about our place in time and space. Perhaps this is why the immersion is successful: it is repurposing a space already designed for wonder; for suspended belief and for questioning our beliefs.