Galerie im Turm’s latest exhibition ‘Apple. An Introduction. (Over and over and once again)’ addresses thematic and conceptual questions surrounding the figure of the apple, as an evocation of biodiversity loss. The exhibition is not only a re-introduction to the apple but, as a whole, the project invites and also implicates the audience; suggesting that the themes presented—climate change, biodiversity loss, resilience and preservation—are a shared responsibility.

In the exhibition, artists Antje Majewski and Paweł Freisler present the ubiquitous fruit—a food staple that has been deemed unremarkable by society—and frame it within multiple contexts as the crux of the exhibition. Weaving together five years of research, artistic exploration, cultural-history and politics, the project draws on an email exchange between the two artists and incites conversations around nutrition, market dynamics and the resilience and preservation of species and climate change. 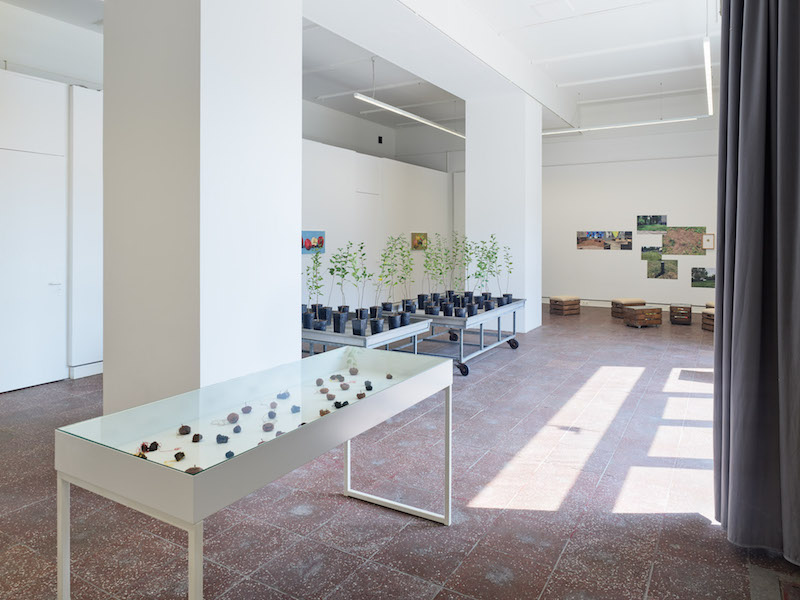 Antje Majewski & Pawel Friesler, ‘Apple. An Introduction. (Over and over and once again), Installation view. // Photo by Eric Tschernow, Courtesy of Galerie im Turm.

As the title suggests, the fruit is introduced and re-introduced over and over again. The visitor sees the apple in its many forms: as a shrunken, dried fruit; a biblical temptation; an important aspect of biodiversity that should be preserved. We are able to interact with it through video installations, paintings, a guide book, photographs printed on wall panels, carved apples and printed matter. It seems appropriate that the various forms of media mirror the various meanings and themes of the fruit: a painting harkens to traditional representations of the fruit in Romance-era still-lives; a documentary-style film explores the mother species of domestic apples in Kazakhstan and gestures towards preservation and biodiversity loss; religious motifs present biblical illustrations of the “forbidden fruit.”

Such a multiplicity of media and themes runs the risk of appearing disjointed or fragmentary, yet it ultimately serves to collaboratively represent and access a variety of voices. By utilizing additional programming, like a conversation led by researchers, educators and professors, the project veers away from portraying a single, homogenous perspective and interpretation. The real-world implications of the apple, as metaphor, are also reflected in tree-planting and harvesting workshops in public space, held in conjunction with urban initiatives and education institutions. Handouts for ‘Trees Seeking Adoptive Parents’ have been placed at the entry of the gallery. The range of presentation-styles—for example, reading materials found in crates in the space, documentary-style video installations, physical objects and paintings—ensure that the project is accessible for understanding and engagement by various audiences. 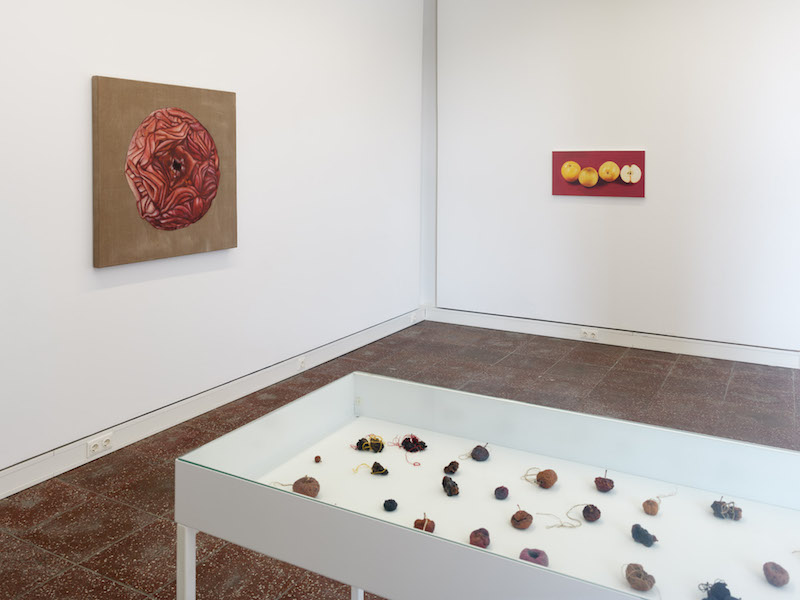 Antje Majewski & Paweł Freisler, ‘Apple. An Introduction. (Over and over and over again)’, installation view. // Photo by Eric Tschernow, Courtesy of Galerie im Turm

Paweł Friesler’s apples with ornaments carved into them are presented in a table covered by glass, their skin intricately adorned with etchings. While his apples gesture toward the organic matter, the carving and what appears to be delicate weaving turn the object in question into an artwork. Ante Majewski’s paintings of various apple species echo intimate portraits. The works are simplistic, with basic coloured backgrounds and four to five apples arranged in the middle of the piece, their irregular and misshapen bodies depicted with a certain tenderness. The “fine art” aspects of the show thus work in conjunction to portray the apple as we know it.

The exhibition in its current form at Galerie im Turm gravitates around a table of potted apple trees. Placing the trees in the centre of the space ensures that the visitor is continuously aware of their presence – to see the entirety of the exhibition, it is necessary to circulate around the table on which they’re placed. The visitor is thus reminded of the palpable applications of the project itself, the exhibition does not simply act as a collection of theoretical ideas.

‘Apple. An Introduction’ simultaneously acts as an exhibition and a call to action; ensuring that the conversations of biodiversity loss, resilience and climate change that are raised are not contained as mere conceptual ideas within the white walls of the gallery space but, instead, extend into the real world. 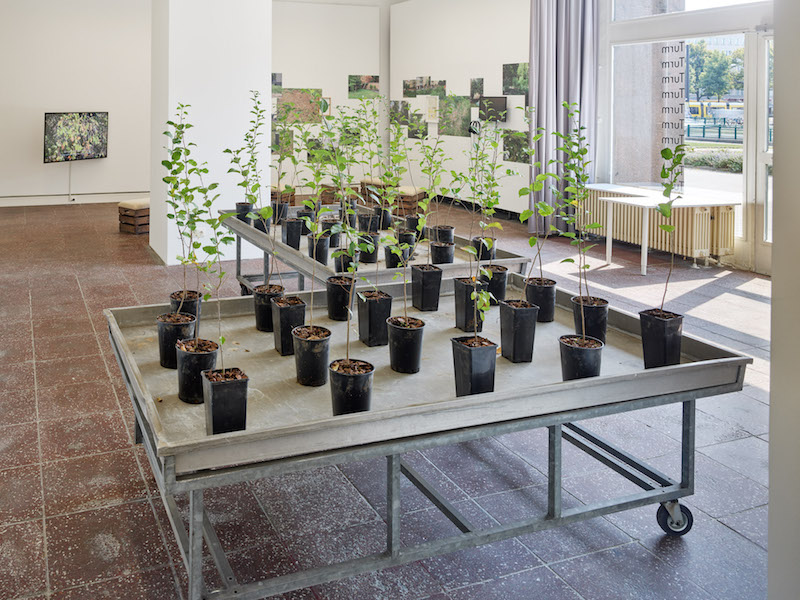 Antje Majewski & Paweł Freisler, ‘Apple. An Introduction. (Over and over and over again)’, installation view. // Photo by Eric Tschernow, Courtesy of Galerie im Turm