The curators of the 11th Berlin Biennale—María Berríos, Renata Cervetto, Lisette Lagnado and Agustin Pérez Rubio—are sensitive and cautious in their engagement with Berlin. They envision the next Biennale as a series of lived experiences that will evolve as a process, leading to the opening next summer. In light of this, they explain that they are here to listen as much as to talk or present. Thus, what is manifested in their first “sequential moment”—’exp. 1: The Bones of the World’—is a dialogue, connecting Berlin to the curators’ native South America. To facilitate the conversation, they have set up camp in a nook of the ExRotaPrint space in Wedding, where visitors may engage them in personal discussion. 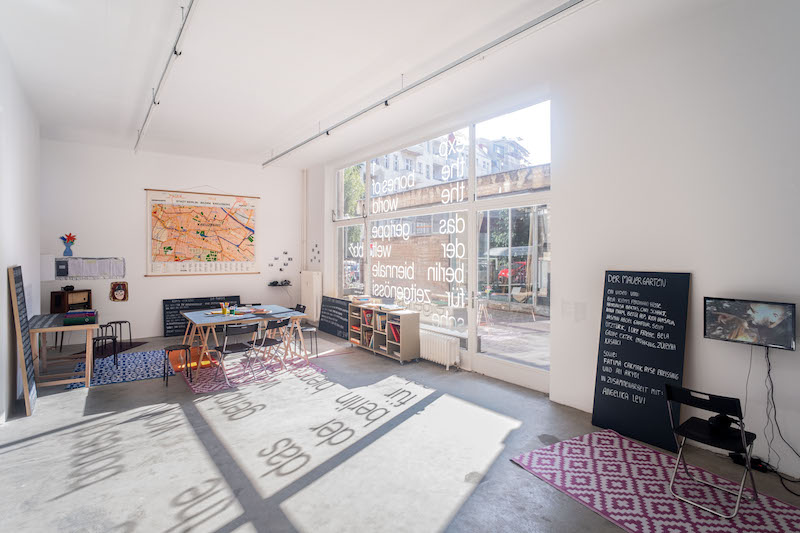 The title of exp. 1: ‘The Bones of the World,’ which opened on September 6th, is taken from early 20th century Brazilian artist and architect Flávio de Carvalho’s travelogue. This is a point of departure for the curators. The exhibition is interested in finding the beauty in life when everything is collapsing around us and being attentive to what can be made from the rubble and bones. It also considers how each of us bares ourselves to the world; through communication, through creation, through action.

On entering the exhibition space, the audience will first find a room containing a large table, strewn with stationary and primary school workbooks. This is ‘Die Remise.’ Initiated by a teacher in the playground of a primary school in Kreuzberg, the installation scrutinizes structural and institutional racism in German schools. The project creates an awareness of the perpetuated cultural whiteness in society, and its impact on education is explored from the 1960s until today. The act of showing ‘Die Remise’ in Wedding helps to bring stories from one neighbourhood in Berlin into the context of another.

What may strike the audience as they walk through the exhibition is the line that runs all the way around the gallery’s white walls, literally connecting the pieces displayed. This line encourages the viewer to make connections between the pieces, find common themes and acknowledge the curators’ act of selection. 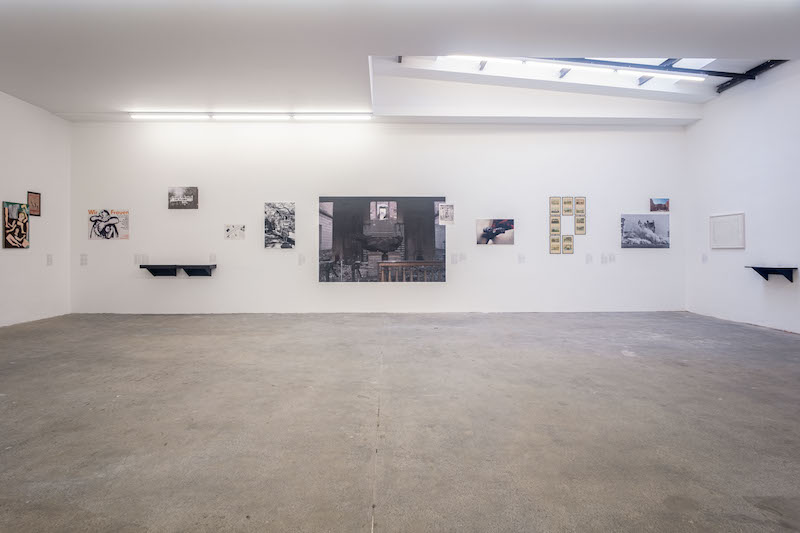 ‘exp. 1: The Bones of the World,’ 2019, Installation view // Photo by Mathias Völzke courtesy of the photographer and 11th Berlin Biennale c/o ExRotaprint

An eye-catching photo by Léo Corrêa hangs like a tapestry in the centre of a wall. It shows the Benegó meteorite, surrounded by the devastation caused by the fire, which destroyed most of the National Museum of Brazil in September 2018. It is one of the few remaining artefacts from this event. Despite the rubble and plaster busying the image, the photo is sombre and quiet, creating a melancholic contemplative tone. The damage of the fire echoes the curators’ statement of purpose– “an attempt to hold on to the complicated beauty of life when the fire has erupted.” Here, the statement is literal. The photo asks: how does such a fire mobilize our unconscious?

Next to the Benegó meteorite is a photo of Generosa Maria, taken by Virginia de Medeiros. Generosa explains: “as a black, bisexual woman from the periphery, I turned myself into a political body, inspired by the activism of many other women.” Her political consciousness, she continues, saved her from ignorance, a kind of ignorance that leads us to endure rather than take action.

There is a notable theme of communication and language in the space. A four-year-old’s drawing is hung on the wall. He used it to explain his father’s clinical depression. He thought “that a sad bee sneaked into his body and is stinging him from the inside out.” He found his own language to communicate the invisibility of mental illness. 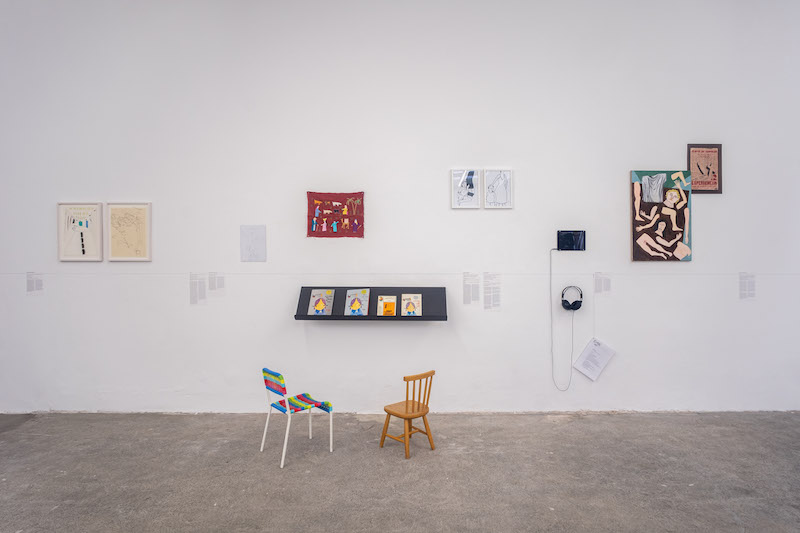 ‘exp. 1: The Bones of the World,’ 2019, Installation view // Photo by Mathias Völzke courtesy of the photographer and 11th Berlin Biennale c/o ExRotaprint

‘In my Language,’ is video by artist Amanda Baggs. She moved through the space—smelling, tasting, touching—with a voice generator speaking overtop. She requests that the viewer consider that a person’s inability to speak is not an inability to communicate; it is perhaps an inability of able-bodied people to listen. Baggs is diagnosed with a range of disabilities and considers her native language to be other than that of the standard English language she was taught growing up. She says: “people like me are only taken seriously if we learn your language.” She highlights the limiting nature of a standard language, which often describes those who do not use it as “non-communicative.”

Mauricio Gatti, a young Uruguayan activist who was imprisoned in 1971, made a series of drawings to communicate with his three-year-old daughter about prison. They depicted animals being trapped by a hunter and taken to a zoo. The letters were turned into a book and used as a political tool, which is also featured in the exhibition. They are still relevant, especially since today Gatti’s children’s generation faces a similar peril.

Among the rest of the works are pieces about Salvador Allende—the former President of Chile—and a book by German artistic research group Feministische Gesundheitsrecherchegruppe (Feminist Health Care Research Group). The pieces successfully convey the vision of the curators for the 11th Biennale and bring stories from the South, while engaging with stories from Berlin’s inhabitants. It is an empathetic, engaged and socially-conscious exhibition.