Zanzibar-born and London-bred, Turner Prize-winning painter and installation artist Lubaina Himid has an agenda. She wants to change the world. But in her first solo exhibition in the United States at the New Museum in New York City, ‘Lubaina Himid: Work from Underneath,’ you won’t find dogmatic manifestos or glaring references to injustices past or present. Her work is neither a call to arms nor to self-pity or guilt. It’s a joyfully-expressed invitation to imagine and, ultimately, to remake the world anew. 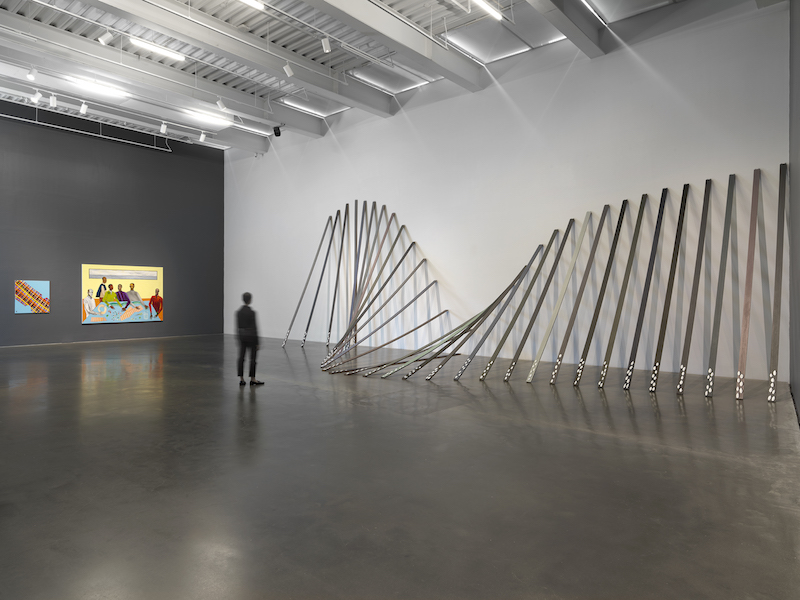 The subtle, whispered invitation begins with the sound of waves splashing against some distant shore; the sound washes over you as you walk through the elevator doors that release you onto the gallery floor. Directly in front of the elevators, propped against the wall, is a row of long, thin boards, dotted on one end with cowrie shells. The spindly planks are fanned out to look like either the shell of a dismantled ship or the spine of a long-deceased whale. They cast a shadow across the wall and floor, creating a ghostly double for the abandoned wooden “bones.” There’s something slightly provocative about the shadow cast by the installation ‘Old Boat/New Money’ (2019). It’s as if the detritus of historical memory leaves not only physical manifestations, but immaterial, fleeting ones, glimpsed momentarily before you turn your back to the shadows and your gaze toward the sun. The sound of the ocean, the planks and their shadow, draw your mind to some faraway place, time and experience. But to what exactly? It’s unclear. Are these the material traces of a metaphoric shipwreck? Is it the Western world run aground? Or is the wooden “spine” perhaps a reference to the death of the “white whale,” Moby Dick, a metonym for the darker side of human impulses? 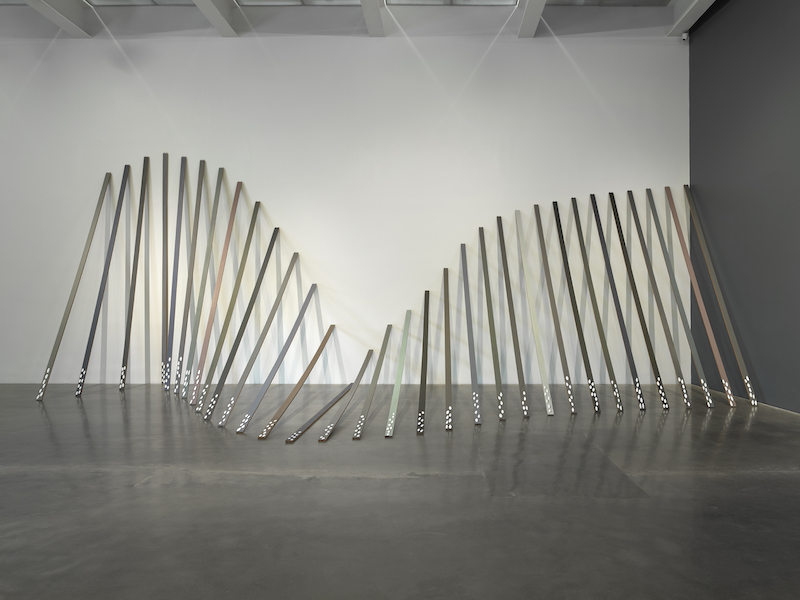 ‘Old Boat/New Money’ is an apt introduction to Himid. Over the course of the three decades in which she has been producing work, she has honed a distinctive style. The undercurrent is political (she has referred to herself as a “political strategist”) but this element is not overt. There’s something generous about her work, inclusive and respectful towards the audience. It’s as if Himid is encouraging you to bring your own memories and associations to bear and then leaves it to you to decide where to go from there.

This sentiment is echoed in the paintings in ‘Work from Underneath,’ all done within the past year. On the left-side of the gallery hang two large canvases, ‘Three Architects’ (2019) and ‘Six Tailors,’ (2019) that depict black men and women, artisans and professionals, in spaces devoted to work. When you consider their near-total absence historically from museums, the shrines of Western high culture, the mere presence of ordinary black people, doing ordinary things is itself a sort of proposition, a counter-proposal to the world as it has been depicted in the annals of art. In an interview with the Guardian, Himid describes how back in the 1980s, when she was first making art, black people were, in her words, “totally invisible.” “The only way you could see yourself,” she observes, “was by looking in the mirror. So making ourselves visible was the purpose of our work.” 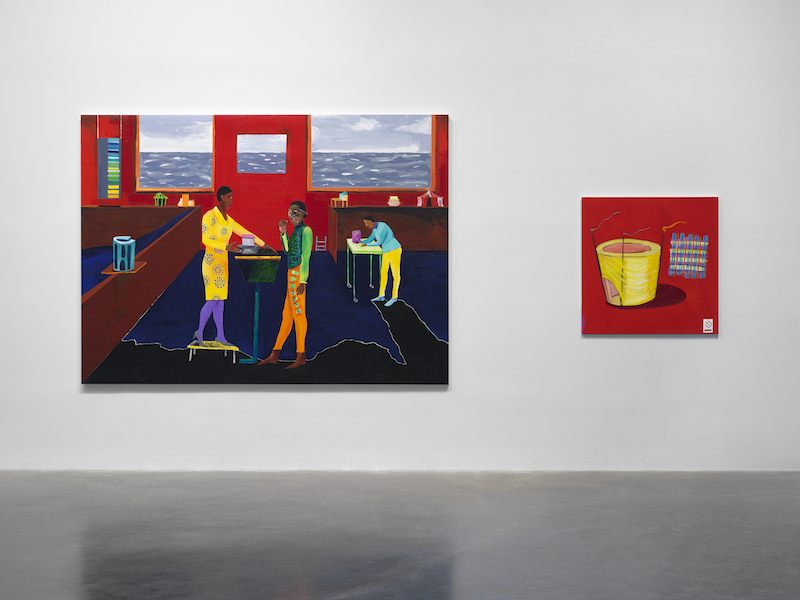 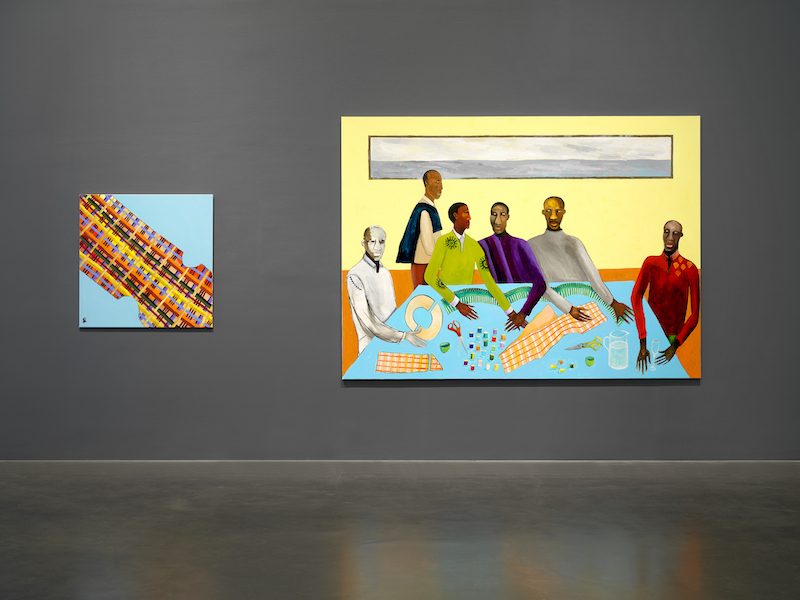 ‘Three Architects’ and ‘Six Tailors’ do more than merely hold up a mirror to black subjects, however, and to reduce them to this singular aim would be to diminish their power. They share the same cool palette. Bright oranges, azure blues and citrus yellows share space with dreamy purples and watery indigos. The setting of each is the workplace. Each offers a glimpse into microcosmic worlds of cooperation in which the participants are working together towards some common goal. In ‘Three Architects’ that shared goal appears to be the design of a Noah’s Ark-inspired structure, on which the three architects—all women—are working. Two peer over a model of the planned building. A third is bent down looking at what is presumably an architectural rendering. Though the third woman works alone and is slightly in the distance, she occupies nearly the same horizontal plane, suggesting a level of authority that is equal with that of the other two architects. Theirs is a work world void of men and managers.

There is a similar levelling-out of hierarchies in ‘Six Tailors,’ where the tailors in question—in this case, all men—sit around a table that is littered with cut swatches of fabric, a pattern piece for a collar and various spools of thread and scissors. No one tailor holds the field of gravity. One stands in silhouette in the background, en route to somewhere perhaps? Two sit on opposite ends of the table, their gazes far away, preoccupied. The real action takes place at the center of the canvas. A row of trees bent toward the sun, two of the tailors direct their bodies and their gazes in one direction toward a third tailor, whose body is turned toward them. The three tailors’ outstretched arms overlap across the table. These aren’t angry workers; these are ballet dancers, linking arms before they move as one body across the stage. 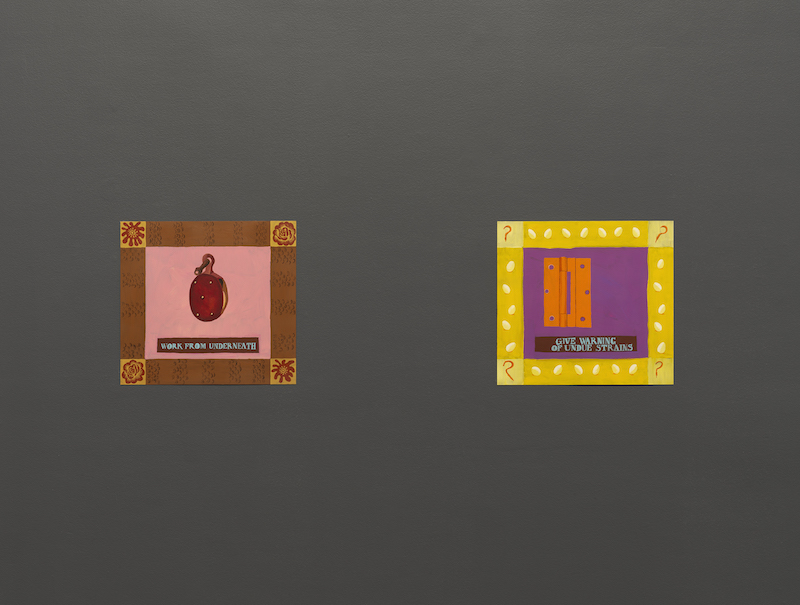 The conceit that new modes of work will transform the world is even more pronounced in the series ‘Metal Handkerchief,’ which runs along the wall directly opposite the ‘Six Tailors.’ Presented as squares the size of the handkerchiefs referred to in the title, the paintings each feature at their center an object related to the words that run along the bottom of the frame. Each is a slogan or heading extracted from a work or technical manual. Taken out of context and rendered in a folk-art style, they look more like the sort of homespun, cross-stitched wisdom formerly found in middle class homes.

By presenting them in this way, Himid introduces a tension that was surely not present in the originals. The sunny colors and less-than-precisely painted images feel vaguely menacing when juxtaposed to words intended to discipline workers or to respect machines. Similar in spirit to the aggressive smile of an overworked waitress at a holiday resort, they hint at the potential violence lurking beneath the façade of complicity. When you see the words “GIVE WARNING OF UNDUE STRAINS” painted in all caps beneath an orange hinge on a bright violet background, you have to wonder: which way might that hinge swing when there’s a failure to give adequate warning of undue strains? Or the admonition “ACCOMMODATE THE LARGEST USERS” also takes on new meaning when it appears beneath a hammer with its head turned upward. The colors are cheerful. Taken at face value, the slogans, benign. But together they hint at a potential threat, like a rumor circulating across the factory floor. The hammer might refer to those who hold power, but it might also be another form of potential power, if picked up by the worker and used to crush the gears moving the assembly line belt. 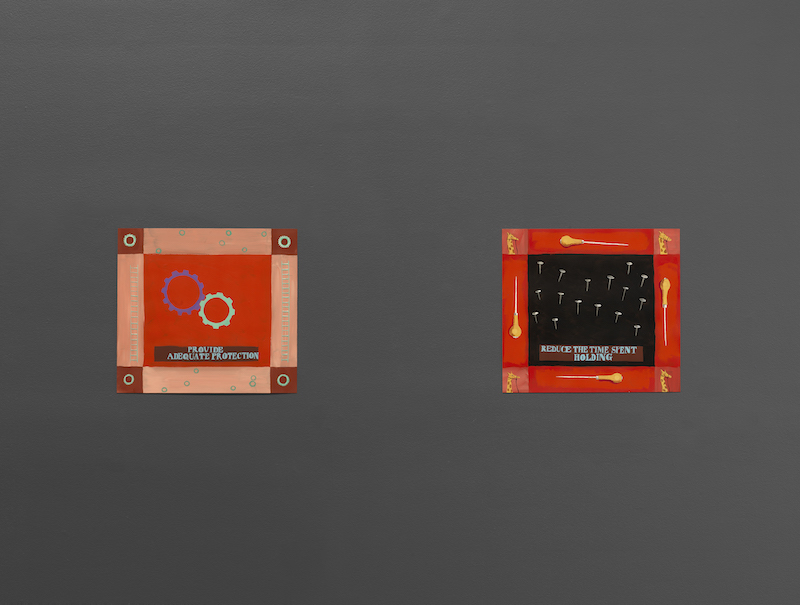 A personal favorite, though, is a bit softer in tone and perhaps the most emblematic of Himid’s latest work. Two lone gears occupy the center of the frame, a large purple one and a smaller sky blue one. They are so close that they almost brush up against each other. You can see where the teeth might easily fit neatly into each other’s grooves. The words “PROVIDE ADEQUATE PROTECTION” appear across the bottom of the frame. The gears point toward a potential solidarity. Were they to finally touch, finally come together, they may very well have the power not merely to protect one another, but to move a machine. The question is what sort of machine will that be and in which direction will it move? The road map ahead provided by ‘Work from Underneath’ may be a bit inexact, but the message is clear: change will only come when “we” work together.