Once upon a time, the Chicago International Art Exposition on Navy Pier was the biggest art fair in North and South America. Modeled after Art Basel and launched in 1980, it attracted an international mix of galleries, curators and collectors.

“It felt a little magical,” Chicago Commissioner of Cultural Affairs and Special Events Mark Kelly told Berlin Art Link. “It felt like the sun was shining on us and Chicago was being seen and appreciated as a cultural capital.”

Over time, a competitor named Art Chicago took its place and continued uncontested, but it faced new challenges when The Armory Show in New York opened in 1999 and Art Basel Miami Beach debuted in 2002. As the Chicago fair’s attendance dipped, financial problems developed and it was bought by Merchandise Mart Properties, but through mismanagement, it closed in 2011. 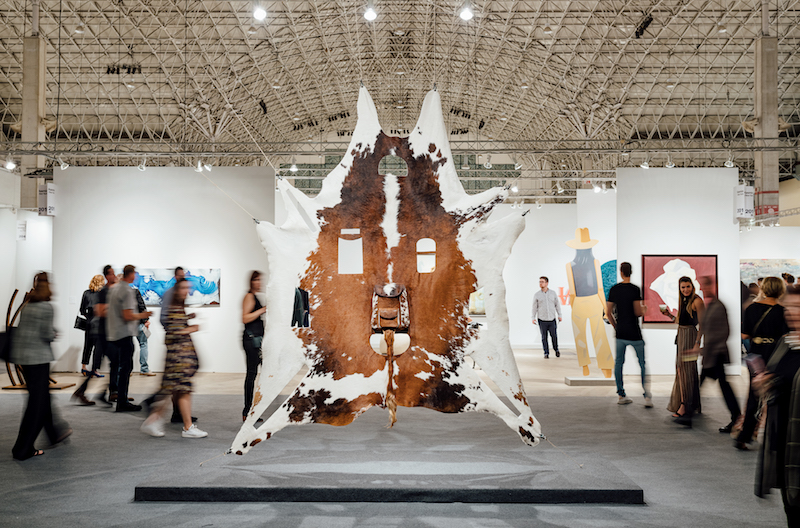 “It was a different fair at the Merchandise Mart,” Commissioner Kelly recalled. “It didn’t feel like a special moment for the arts community. I thought an era had ended, but Expo Chicago came roaring back at Navy Pier and it engaged the entire city.”

The party responsible for Expo Chicago rising from the ashes of Art Chicago is Founder, President and CEO Tony Karman, a former Art Chicago director who had been active in Chicago’s civic, business and cultural communities for over 30 years. Karman, who had never missed a Chicago art fair, launched Expo Chicago in 2012 as an international art fair to serve national, regional and local communities.

“The fair benefits from an incredible backdrop,” he said. “Chicago is a vibrant city. I love running into people from around the world whom I’ve urged to come to Chicago, that tell me how lively it is when they do. It’s awakened in a way that I’d never seen in my 37 years living in the city. It’s really happening here.” 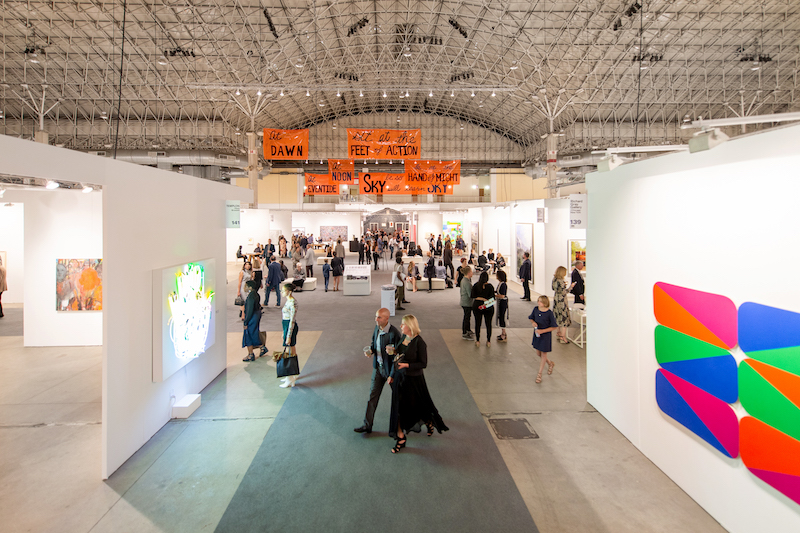 Enlisting the architectural firm Studio Gang to design the first edition of the fair, he made the presentation as important as the art. Fostering collaboration with local institutions, he invited arts organizations and art schools to create special exhibitions that promoted their programs. It’s a component you don’t often see at international art fairs.

There are many notable artists who live and work in Chicago—ranging from ones that were born there, like Theaster Gates and Barbara Kasten, to ones that migrated to the city, such as Nick Cave and Kay Rosen, who had solo booths at this year’s fair. 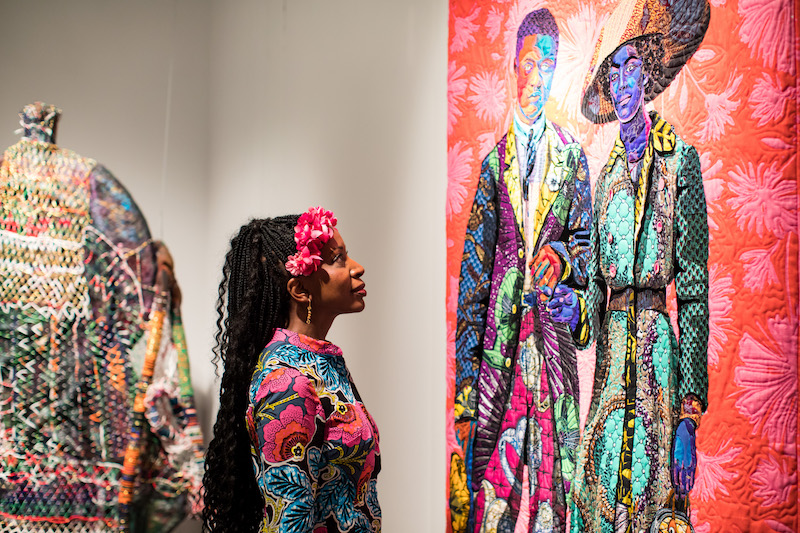 Running into Cave at the fair with his students from the School of the Art Institute of Chicago, we asked him about the importance of Expo Chicago for artists, and seeing Kay Rosen in her Berlin publisher’s booth, we spoke to her dealer about connections that he’s made when visiting.

“I think it’s really important to have a fair of this caliber in Chicago,” said Cave, “It surveys what’s happening on the international art scene, which is why artists come. I’m walking my grad students through the fair to discuss what it all means and the importance of it. It gives them a chance to see how artists coexist, and provides a context for envisioning their work in the broader art world.” 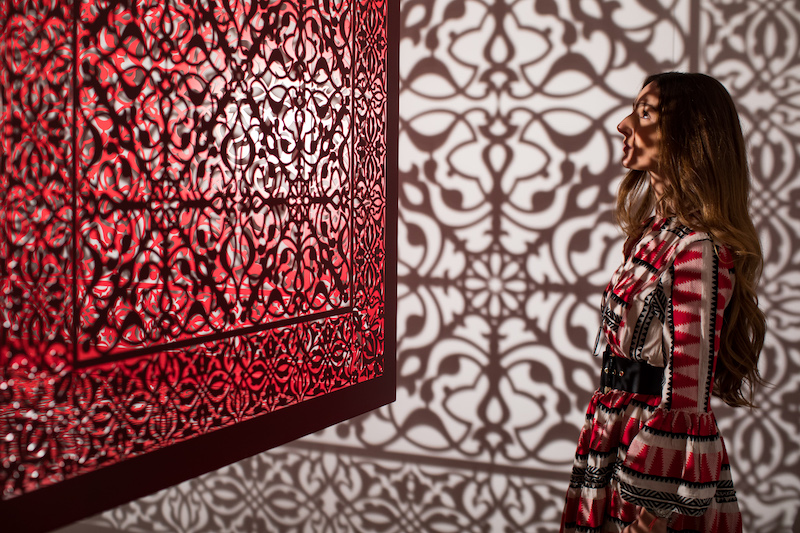 It was the sixth year as an exhibitor for Berlin’s René Schmitt Graphics. The editions dealer had previous knowledge of Kay Rosen’s conceptual word works but didn’t know the artist until he was introduced to her at Expo Chicago a few years ago. They began talking about collaborating on an edition and a new print portfolio, which was on view in his booth, after having been realized out of that conversation.

“Chicago is about making connections,” Schmitt told us. “Besides my strong relationships with the MCA and Art Institute, the reason why I keep returning is that the first time I did the fair people came by and said, ‘Welcome to Chicago,’ and I thought, this is my city.” 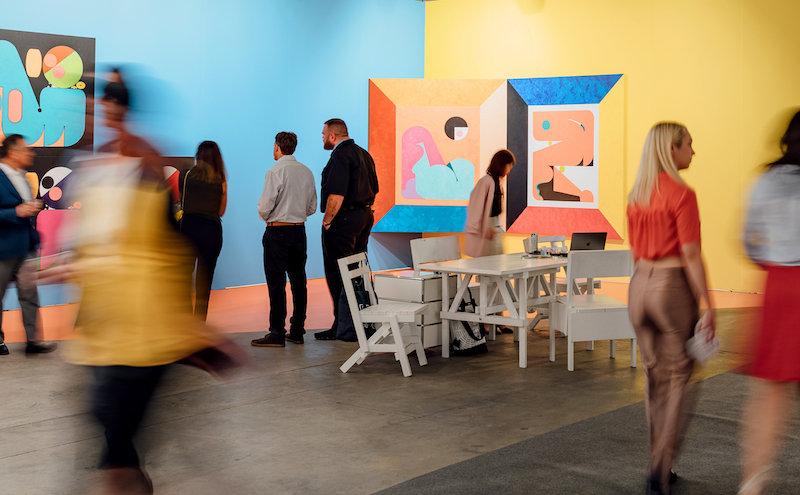 A key ingredient to Expo Chicago’s success is programming, which has been enthusiastically handled by Stephanie Cristello since she joined the fair in 2013. Recently named Artistic Director, she organizes the talks, selects guest curators and oversees special exhibitions, offsite programming and public art initiatives.

She also edits ‘The Seen,’ Chicago’s International Journal of Contemporary and Modern Art, and organizes two curatorial initiatives, which bring international curators to the fair to meet with colleagues, explore Chicago’s cultural scene and discover its artists. Several Chicago artists have received their first solo shows by way of studio visits from the curators—and the visiting dealers often check out the artists’ studios, as well.

“Because a lot of Chicago artists have been successful, dealers think there must be other good artists here,” Chicago gallerist Rhona Hoffman told us at the fair. “So now when they come to the fair they are looking to find artists, which hopefully means that local artists won’t feel they have to leave in order to make it.”