The idea of revolution feels pertinent and topical. We see it in the news and perhaps our everyday lives: members of Extinction Rebellion blocking cars on the roads, Greta Thurnberg urging school children and office workers to leave their classrooms and desks to take to the streets in protest of the current climate crisis, and political riots in Washington, D.C. and Rio de Janeiro. Yet revolution can be understood even more broadly; we are in the midst of a technological evolution, the newness of digital automation rapidly increasing, all of us metaphorically becoming that one elderly relative who can’t figure out how to take a photo on their phone. Revolution can be a transformation of how we perceive: art, accessibility, even ourselves. Perhaps nothing is more prepared to take on this conceptual topic than a digital art festival, which visibly brings these themes of rapid change and transformation to the people. Signal Festival—a digital art festival that took place in early October in Prague—was organized this year around the central topic of ‘Revolution’ and featured a series of installations, video-mapping and performances. As this year’s theme was inspired by the historical events of the Velvet Revolution in the Czech Republic, which took place 30 years ago, Signal Festival both looked toward the cultural and political ruptures of the past and also faced the present and the future; testing the ability and possibility of public art to transform our understandings of what art itself is.

Organized in three sections, the festival bid you to weave through the city at dusk, discovering the smaller cobblestone alleys of Malá Strana and Old Town and the larger boulevards of Karlìn. As such, the organisation of the festival not only showcased the works in ways that were easy to navigate and schedule but also showcased the city, juxtaposing the digital with the romantic, often ornate architecture of Prague. While it was primarily located in public places, the festival also partnered with private institutions to bring visitors into spaces normally not accessible to the public. The festival therefore recontextualized art as not being strictly caged within the walls of a stuffy museum. Moving from Malá Strana to Old Town—dodging couples taking pictures of each other on the Charles Bridge (“It’s not my fault if you don’t like your hair in every single picture”) and the incongruous ocarina player whose lilting tune could be heard even over the boisterous lads-on-tour—you’d find artworks, lights dancing off of buildings and sometimes the audience themselves, and crowds respectfully hushed. 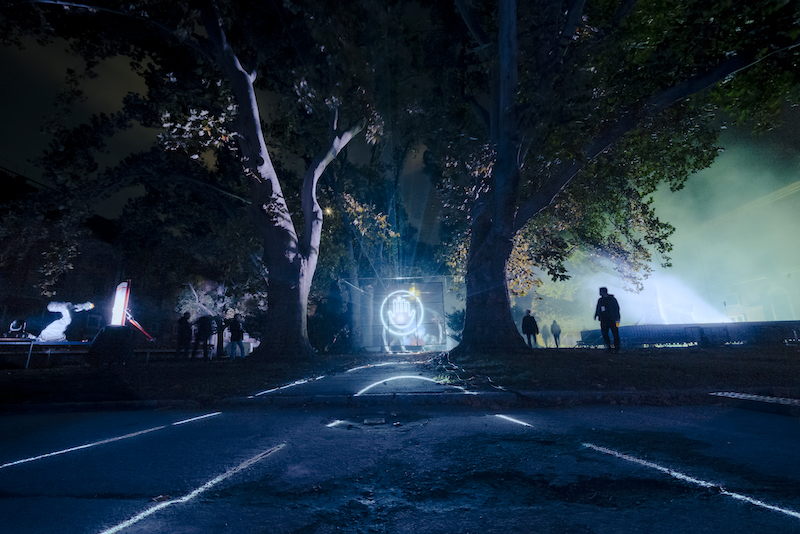 Entering the threshold of an extensive Baroque complex, the work ‘I’m Leaving the Body’—executed by various artists such as Federico Dìaz and Rafin–confronted us with the smell of frankincense drifting in from the courtyard, a shining blue light portraying a six-fingered hand radiating onto the entering public. On either side of this light, inside the complex, were two robotic arms, busily working away, spraying paint or burning frankincense on their respective blocks. In conjunction with the lights and the resonating bass of the music, these constantly moving robots created a feeling of a not-so-distant dystopic future. In this instance, the theme of revolution was not concentrating on the past but looking forward, jarringly exposing the public to the technological and digital transformations that are rapidly occurring around us. 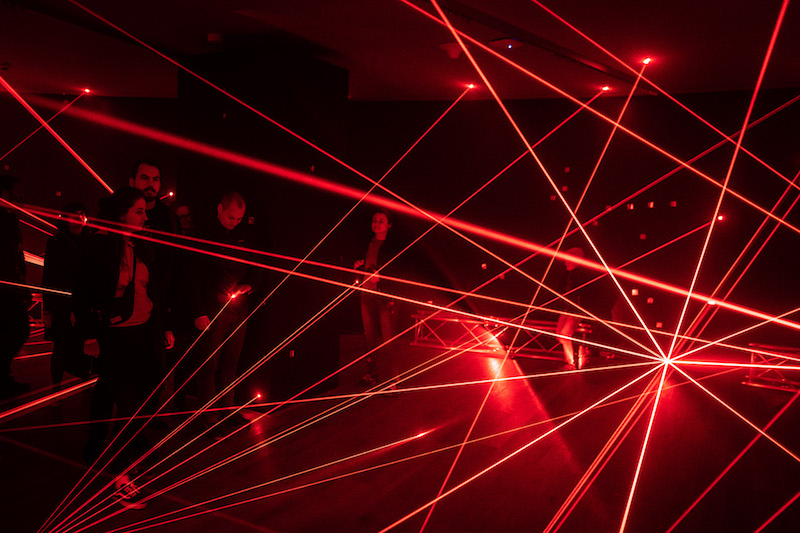 In Malá Strana, snaking down a hill, headlights on, were a line of parked East German Trabant cars with small televisions glowing from their trunks. Created in conjunction with Signal Productions and Post Bellum—an organisation dedicated to preserving and exhibiting recent cultural memory—‘Trabi’ was the most clearly linked to the cultural past and historical revolution, commemorating the exodus of 15,000 East Germans who attempted to get to West Germany via Prague in 1989, abandoning their vehicles when taking the train into West Germany. The hill was the actual site of the event. The dim headlights were evocative of flight, rupture and change. In the trunk of each car, televisions played archival footage and interviews with Czech and German citizens at the time of the event, prompting a consideration of what is taken and what is left behind in times of revolution and disruption.

In the National Czech Museum of Music, Memo Atken used previous experience as a mathematician to create an exact and precise light show paired with music and a projection on a screen, breaking down the normative boundaries of art and science in his work ‘Simple Harmonic Motion for Lights’ and blurring the distinction between the left and right side of the brain. From the ceiling, an orange light pulsated in time with the music, occasionally colliding and bouncing off of the other. Digital renderings of shapes projected on a screen, constantly moving and in flux, looked like they were gesturing towards the golden ratio or an esoteric mathematic equation found in nature; the wing of a butterfly, perhaps, a snowflake or a seashell.

In a formal and stylistic break from the other, more digital-based works, ’10^100′ by transdisciplinary artist collective Giegling resembled a festive, multicolour playground, celebrating the 100 year anniversary of the origination of Bauhaus. Dispersed throughout the Notsitz Garden were metallic streamers attached to poles, a bouquet of flowers on a pedestal, large streamers that resembled the ones in car sales. Weaving through these scattered objects people, presumably members of Giegling, were trailing fog behind them with their smoke machines, one wielding a megaphone. The work, while slightly incongruous with the others, is a reminder of the stylistic transformation of Bauhaus that has contributed to the art and architecture of today, leading to contemporary public art, and thus the foundation of the festival itself, as the next step of this evolution. 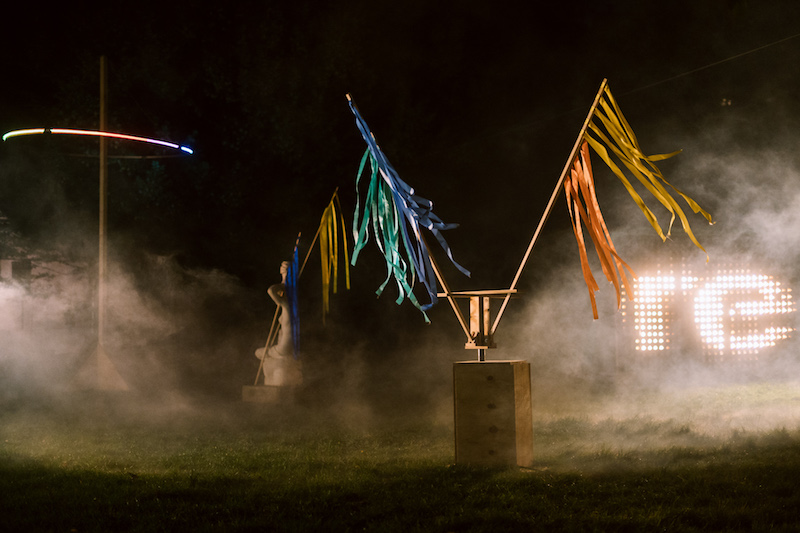 In the Old Town, the works shown in the ornate, historic buildings aptly demonstrated the ability of art to recontextualize space. In the grand U Salvatora Church, ‘Signal Soundscape: Inner Land Study I’ oscillated between a collective spiritual experience and a light show at a heavy metal concert. We were tethered to the notion of the spiritual in the tangible space: the architecture of the vaulting ceiling, the frescos and the faint lingering scent of old wood and incense tied us back to the physical church. The music built tension as our eyes were raised to the heavens, smoke billowing from the ceiling and, from the fog, a fresco of Jesus with his hands raised came in and out of view. The work tangibly felt like a transformation of the original space, while still respecting the architecture of the church. 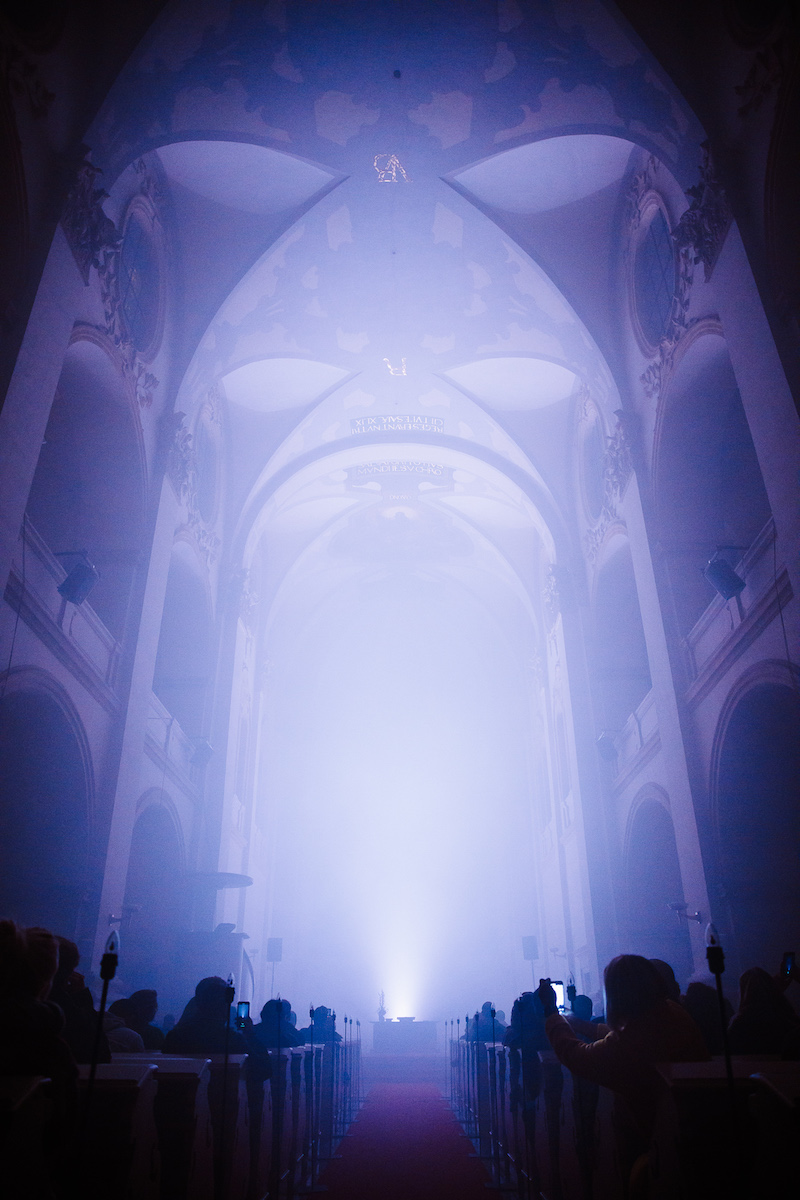 Further down the street, in the Convent of St Agnes of Bohemia—part of the National Gallery of Prague—was a work commissioned from a grant open call ‘Signal Calling.’ ‘Reflection’, created by two young Czech architects Adam Cigler and Petr Vacek, intertwined the digital element alongside the physical, with a honeycomb of mirrors that seemingly responded to the viewer. The mirrors clicked and shifted in unison, like the pearlescent scales of a fish in motion, sometimes reflecting lights throughout the courtyard and sometimes facing the audience, implicating and bringing the viewer into the artwork.

Public art, in itself, is a revolution in the ways in which we see and perceive art. It is a different family altogether from the white cube of gallery spaces. On the streets of Prague, there was no longer a set expectation for behaviour–no regulated pace, no chronological, immaculately-lit framed oil paintings with didactic panels alongside, hung at eye-level for perfect contemplation. Instead: parents with scarf-bundled children on their shoulders, the smell of hot dogs wafting from nearby stalls on the periphery of the parks, young couples in hoodies shyly grazing hands, looking at the art, then at each other, then away. By bringing art installations into public space and even into private spaces made public by their temporary accessibility, Signal Festival effectively engaged a new set of audiences.

However, that isn’t to say that Signal attempted to ‘dumb down’ concepts for a homogenous public. There is a thin line between entertainment and criticality, between aesthetics and conceptual nuance. To mediate the dichotomy, Signal Festival interspersed the two: a complicated choreographed dance of theoretical depth and popular attraction.