The current exhibition at the Julia Stoschek Collection by New York-based studio WangShui is part of ‘horizontal vertigo,’ a year-long program curated by Lisa Long, and is their first solo show in Europe. As the curator explains, WangShui’s “works activate the hallucinatory spaces between image and object, body and screen, diaspora and descent.” 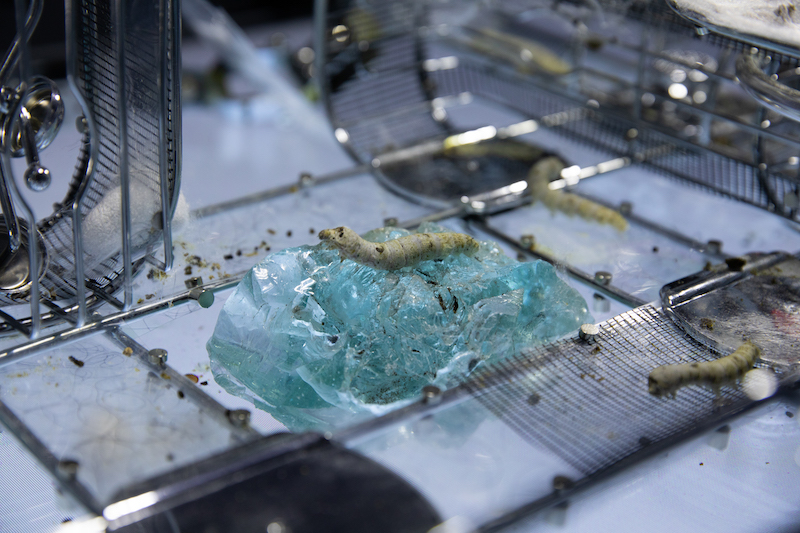 The exhibition text highlights a strong focus on transformation, visible throughout the exhibition, but the most relevant strand is, perhaps, the way in which WangShui explores Chinese geography, myths and nationalism. In the first room of the exhibition, the video installation ‘Gardens of Perfect Exposure’ (2017-18) presents dozens of silkworms pupating on a structure made out of bath fixtures; the white silkworm larvae are going through the transformation process of producing silk. They are all different sizes depending on their age; they move around the fixtures, they feed themselves and grow, all within the gallery space. Visitors can see the white larvae in the flesh, but they are also simultaneously being captured by three cameras and live projected on the gallery walls. The title of this work ‘Gardens of Perfect Exposure’ refers to the Chinese imperial palace in Beijing, which was destroyed in 1860 by British and French troops. The “Garden of Perfect Brightness,” as it is known, has become one of China’s most iconic monuments and the symbol of Chinese nationalism, despite being today “invisible” (as it has been entirely reduced to the ruins). This work inventively links the transformation of the historical palace with the transformation of the silkworms, through its references to visibility and invisibility, but also to the relationship of China to the world.

The work also makes undisputed reference to the Silk Road and its history; there are links between the Chinese imperial palace in Beijing and the political relations of the Silk Road. The foreign trade that happened, as a result of the Silk Road, resulted in Western archaeological explorations in the 19th century, which scattered artifacts from the Silk Road around Western museums. This work—without making any claims or judgments—symbolically opens up a discourse around these visible and invisible traces of Chinese history. 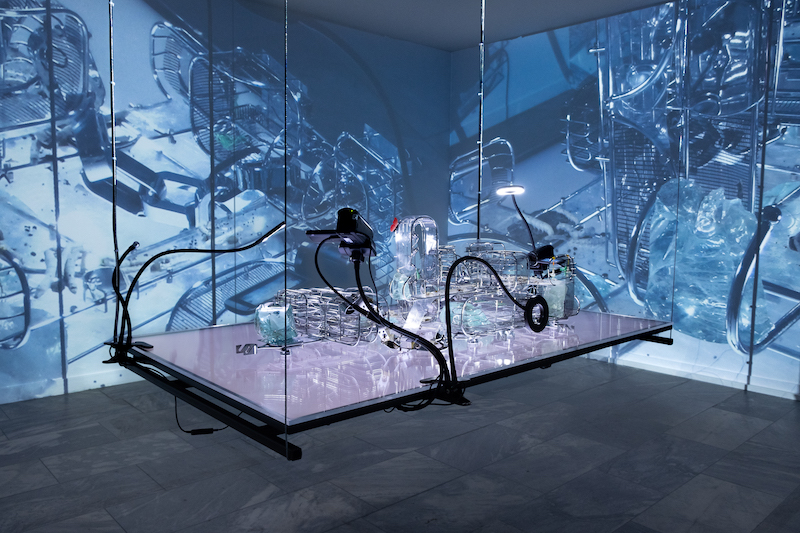 In dialogue with the ‘Gardens of Perfect Exposure’ installation is the single-channel video installation ‘From Its Mouth Came a River of High-End Residential Appliances’ (2017-18). The video is comprised of drone footage of the holes in skyscrapers on the coast of the South China Sea in Hong Kong. These holes are known as “dragon gates,” which are meant to be passages for dragons to fly through and to ensure the proper flow of energy between built and natural environments. The idea relates to Feng Shui philosophy, which was forbidden during the Cultural Revolution in China. In the video, we learn from the voice-over that the practitioners of Feng Sui were forced to flee to Hong Kong from mainland China and, consequently, Feng Shui became popular there. The holes in the skyscrapers highlight the resistance towards the Chinese government but, at the same time, toward Western modernist thought. The refusal of Western modernism is demonstrated by the holes in the skyscrapers, which are understood as “form of voids,” against the modernist focus on form. 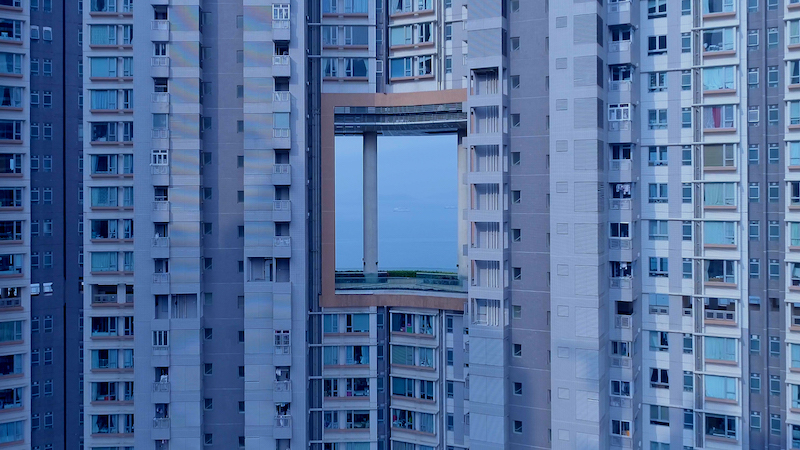 As the silkworms are pupating in front of our eyes in the real space, for example, we simultaneously receive an engaging sensory experience and learn about the socio-economic history of China and its relationship to the West. Three moving-image installations presented at the exhibition, which were produced by WangShui between 2016 and 2019, focus on constant transformation. The exhibition also points to visitors’ experiences, which change from one visit to the next; a month after the exhibition opening, the visitors have been able to see the silkworms metamorphosis from larvae to moths.

The WangShui exhibition complements the ‘horizontal vertigo’ programming and its focus on process, difference and transition from one state to another, with a very immersive and sensory experience. Formally, the exhibition is interactive and spacious; each work in the show is given its own exhibition space, and room for contemplation. The focus of the installation is on the screens themselves, but encourages viewers to engage with what we do not see there. How does the screen materialize what we see off screen? What does the screen make visible and what remains invisible? The exhibition invites us to contemplate these questions and engage intellectually and sensorially with the artworks in the space.