In this time of climate catastrophe, it is urgent that we develop a model of society that considers the needs of non-human beings and the planet. Anaïs Senli explains the challenge of thinking a non-anthropocentric thought and the detrimental effect of a uni-perspectival view of the world. The anthropocentric perspective has been constructed on the belief in the superiority of human thought. It is difficult to imagine a world without humans, yet a world without humans is impending if something doesn’t change. Thus, the challenge of a non-anthropocentric thought becomes a strategy for survival. Taking inspiration from microscopic life and the devastation of crude oil extraction and consumption, in her upcoming exhibition ‘The Heavy Air That Surrounds Us’ at Galerie im Turm, Senli draws links between the two to imagine new perspectives on the world. 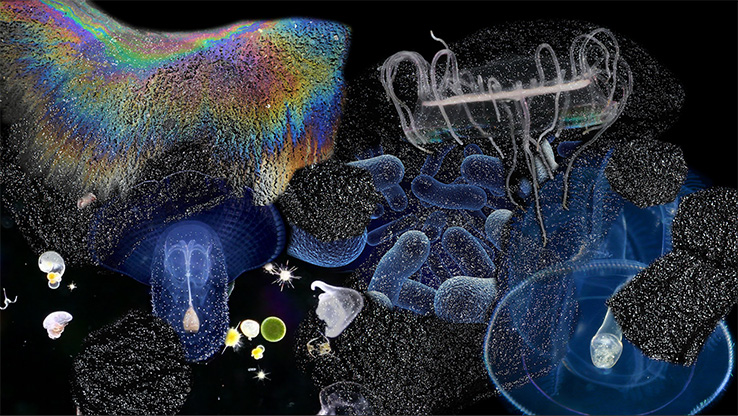 Anaïs Senli: ‘The Heavy Air That Surrounds Us,’ 2019 // Courtesy of the artist

Martha Lochhead: What was the starting point for your exhibition ‘The Heavy Air That Surrounds Us’?

Anaïs Senli: I would say there are the two main starting points to the show: plankton and the idea of the micro-world, and the problematic nature of crude oil.

Last year, I started to analyse the microscopic world after becoming interested in biologist Lynn Marguis’ work. She criticises Darwin’s theory of evolution, arguing that the motor of evolution was not natural selection, as Darwin said, but rather the symbiosis and collaboration between a species. Some of her examples that she uses to support her theory come from the microscopic world.

Then I became concerned that crude oil is officially running out. The International Energy Agency officially recognised that the peak of the oil was in 2006. This is when the condition of the oil changed; at that moment we surpassed the maximum amount of extraction at the highest quality. Now we are just finishing what is left and we have maybe two decades worth.

After that our whole system, our cosmo-vision of the world, will collapse: first energetically and then ecologically. The consequences are vast. Even with renewable energies the world will have 5 times less energy than now since it does not yield the same quantities. It is not enough to sustain our rhythm.

In addition, according to T.J. Demos, if we consume the crude oil that is left then it’s game over for the climate owing to the greenhouse gas emissions that would result from buring oil. The contamination that it will produce is irreversible. We are in a moment where something must change.

ML: And where do the plankton come in?

AS: Phytoplankton is responsible for 50% of oxygen in our atmosphere. It is the lung of the planet. Also, plankton is at the bottom of the trophic chain, so if it disappears the consequences are major and acidification and rising ocean temperatures threatens that.

When plankton dies, their matter mixes with other organic materials and after millions of years, they combine to produce oil and gasses and other sources of energy important to our society. I became interested in this link; that plankton, at the same time, produces oxygen important for life, has a vital place in the trophic chain, and yet, on the other hand, forms crude oil.

ML: Your work aesthetically explores the micro, but encourages thought about the big picture, and speaks to current issues. What do you want the viewer to glean about climate change from your exhibition?

Trying to establish a thought that is not anthropocentric is in itself a paradox because we are humans, anything that we think will be anthropocentric. But we must try.

If we consider how the Earth was formed this might go some way toward creating a non-anthropocentric thought. Shortly before Earth as we know it was formed many, many asteroids collided with it. Scientists say that 50% of Earth’s water may come from these collisions. So, what is the chance that with these collisions micro-life from other parts of the cosmos came too? It is very high. I was talking with a scientist recently and he even said that this is the most plausible reason for life on Earth because for millions of years there was nothing and then there was life. For two thousand million years there was only bacteria, and then they start to evolve into other forms of life. This means that we could be human and alien at the same time, thus challenging what we consider identity and otherness. This provides a way to get out of the anthropocentric thought.

ML: In your opinion, what is the role of art in making impactful changes?

AS: As an artist, I am humbled, because there are lawyers and activists to provoke social change. I would be very happy if I generated thought or awareness about the topic.

The role of art—for me, as I think artists have different intentions—is to create an aesthetic moment of contemplation that interrupts the way you access reality. Art can generate this ‘weirdness,’ so to speak. For example, when regular objects become strange because they are in another context. To me, this has a political potential. The moment that you interrupt your regular access to reality is the moment that something exciting can happen, a new thought can happen. 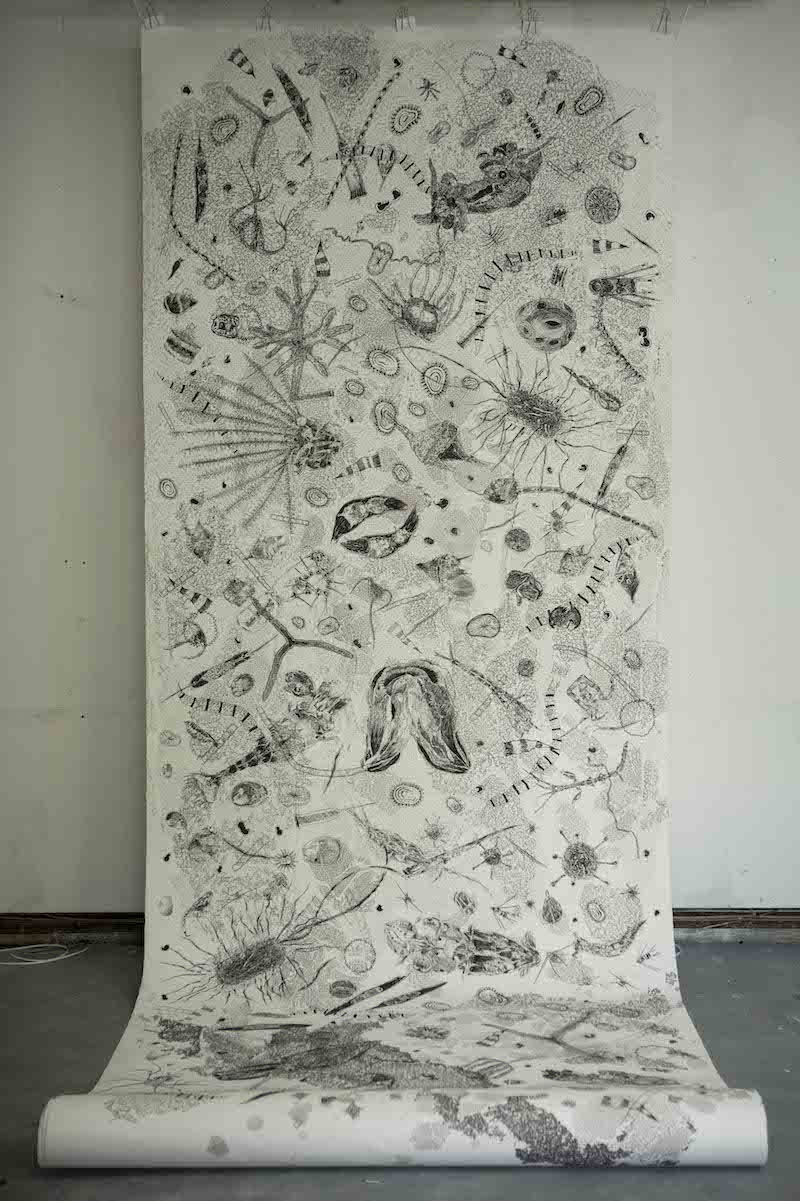 ML: How are your ideas going to be represented in the exhibition?

AS: Dylan Trigg uses the figure of ‘flesh’ to represent non-anthropocentric phenomenology and as a connective tissue that is an anonymous zone, indifferent to us but encompasses/possesses ‘things.’ I have made black surfaces with bitumen, a material that is a component of crude oil. In the show they have a double reading: on the one side, I am talking about the problem of crude oil and, on the other side, they work for me as this flesh that could lead us beyond anthropocentric thought.

There will be four hanging neon sculptures that will take the form of the first bacteria that existed on Earth, the first living beings. Each of their silhouettes will be in blue; that will be the only colour element in the show. These bacteria changed the atmosphere of Earth and created all the chemical processes necessary for life.

I will make the neon sculptures a little bit dirty with this bitumen material to demonstrate that even this original life is contaminated; it is corrupted, and we cannot know from where.

I have big papers with drawings of plankton, which I will hang from the walls to the floor and fall into liquid-like crude.

Anaïs Senli: detail of bitumen sculpture, 2019 // Courtesy of the artist

ML: In previous exhibitions such as ‘I’m always alert’ earlier this year at the BBA Gallery here in Berlin and ‘I’m not like you’ back in 2017 at Glogauair in Berlin, you explore the female body. Can you tell us more about this theme in your practice, since it is quite different from your current exhibition?

AS: I try to fight essentialist views. In that sense, this work is connected to my current exhibition. Nature and the female are both loaded with essentialist connotations. In addition, nature is seen as feminine and passive, like women often are. The link is strong. This is an ongoing project where I aim to give voice to experiences of femininity that are with the status quo. In both of those examples, I used the body as this crisis territory.