‘De-Heimatize It!’ is a call to action. The exhibition—part of the fourth Berliner Herbstsalon, an interdisciplinary festival—is a battle-cry, multiple voices coming together to form a rousing chorus demanding change, representation and attention. The punctuation, in this case, acts as an imperative. It is not a query nor a suggestion, and should not be confused as such. The term ‘Heimat’ in German refers to a notion of ‘homeland’. With the works shown at ‘De-Heimatize It!’, this idea of nationhood is problematized, gesturing towards fraught pasts where the ‘fatherland’ explicitly includes some while excluding others. The artists are therefore presenting alternative means of solidarity and finding common connections, outside of a traditional, patriarchal-authoritarian framework. 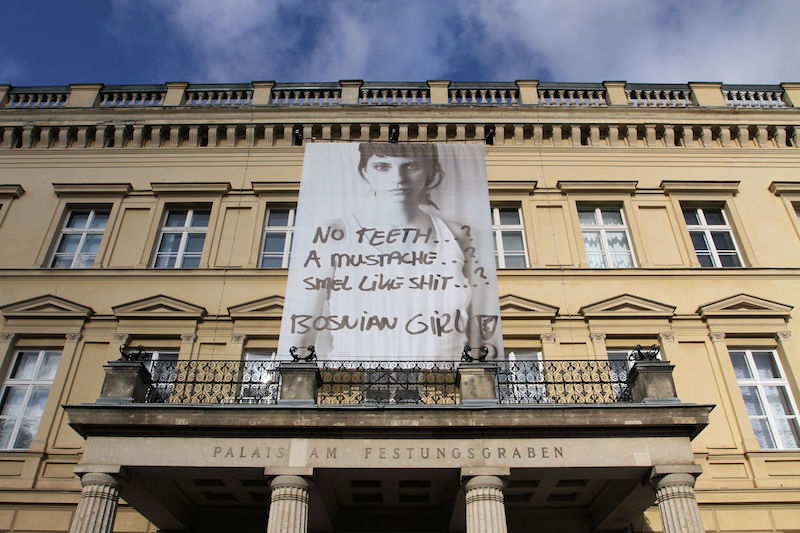 Above the grandiose columns and the front doors of the Palais am Festungsgraben, next to the Maxim Gorki Theater in Mitte, hangs a large poster with a young woman defiantly staring down on you. Emblazoned over her in an enormous sharpie-scrawl are the phrases: “NO TEETH…? A MOUSTACHE…? SMEL LIKE SHIT…? BOSNIAN GIRL”. The woman pictured is the artist herself, Šejla Kamerić, the words overtop of her left by Dutch ‘peacekeepers’ on the walls of barracks just outside of Srebrenica in 1994 or 1995, around the time of the Srebenica genocide of more than 8,000 Bosniaks during the Bosnian War. The work is in stark contrast with the neo-classicist building, which evokes histories of palpable hierarchies. Kamerić’s powerful piece, titled ‘Bosnian Girl’, is emblematic of ‘De-Heimatize It!’, as it unsettles our ingrained expectations of what lies within an institutional space such as this one. Within the multiple floors of the Palais am Festungsgraben, the artists act like moss, they dig through the cement of the architecture, destabilizing the historical foundation of the institution.

The power of the exhibition lies in the multiplicity of perspectives and modes of representation, with an underlying solidarity. For instance, a large pile of earth sits in the hallway of the second floor, with small pockets of sugar, coffee beans, cocoa and chocolate—all products that are frequently produced by the exploitation of workers on colonial plantations. Products that are ubiquitous in our everyday lives, yet ones that often have violent histories that carry into this day. This piece, ‘Table of Goods’ (2017) by Grada Kilomba, is defiant and demanding. It takes up space and in order to get into the next room, you must walk around it. You recognize the long, painful past of colonialism, as well as the fact that it is still very present today. 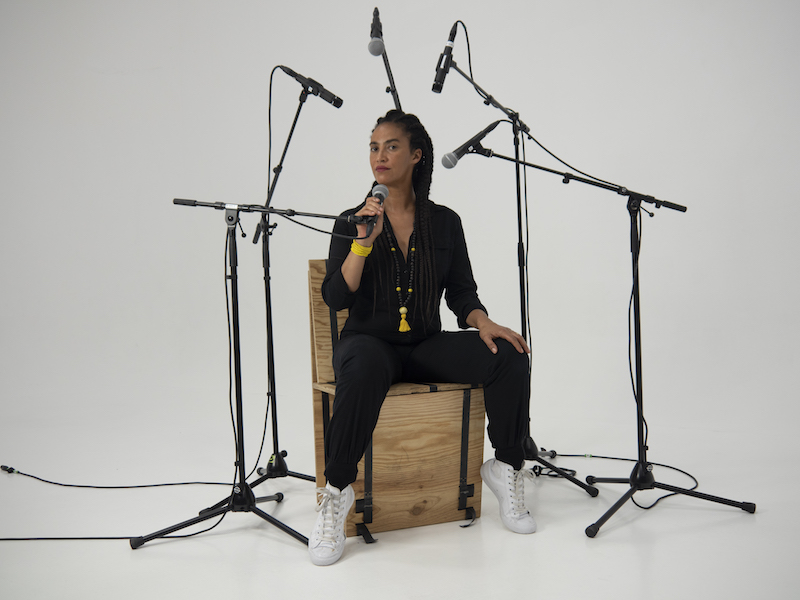 In the following room, videos by Kilomba are projected on screens of various sizes. With her works ‘Interpretation I–III’, she re-examines ancient Greek mythology, narrating the myths through an intersectional feminist lens, sitting regally on a high chair. From a different screen, she watches the action in the first. By reinterpreting the myths, she questions how these myths are told and by whom: effectively investigating and revealing the racist, gender-specific, and repressive historical hierarchies and structures rife within these familiar stories. The works are particularly poignant within the architecture of the space–on the ceiling, staring down on the screens are frescos of ‘great thinkers’ of the Western world; Goethe and Tolstoy, for example. All of them are white men. 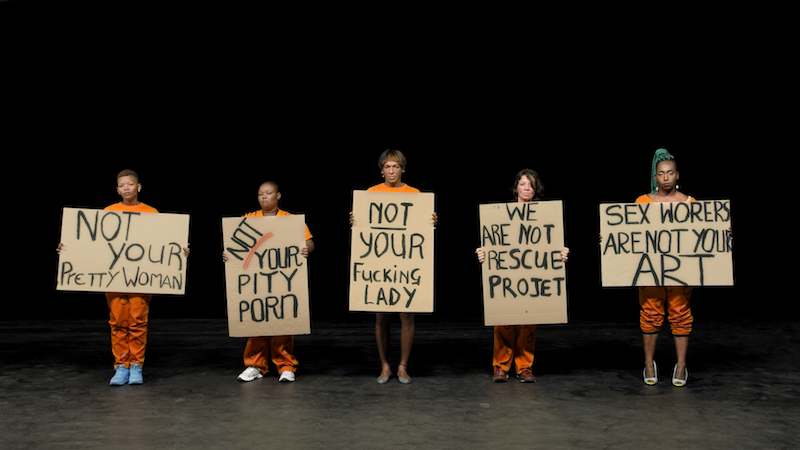 Candice Breitz’s work ‘TLDR’ (2017) is a portrait of sex workers in South Africa that takes the form of video interviews and an hour-long musical, working off of Breitz’s established dialogue with SWEAT (the Sex Workers Education & Advocacy Taskforce), the non-profit organisation with which the sex workers are affiliated. The title (internet slang for “too long didn’t read”) gestures towards the lapse of attention spans, encapsulating how content and topics must be broken down into easily-digestible, bite-sized pieces; Breitz takes activism and transforms it into a mode that can hold attention. The work in itself questions if artists that are in positions of privilege can help provide a platform for marginalized voices and augmenting calls for social justice.

Pieces by Delaine Le Bas spread throughout a separate room. In one corner, her work as well as her late husband’s are tacked to the wall and scattered on a desk, a chair slightly pulled out, as if someone had left in a rush. It is an intimate portrait of a person, of a couple, offering a glimpse into another’s life, like being able to see inside a family’s home at dusk, just before they close their curtains. On the other side of the room, there is a shrine dedicated to her late husband and frequent collaborator, Damian Le Bas. It is touching and deeply personal, yet simultaneously painful: it is a punch straight to the gut as we are faced with personal belongings like cologne lovingly put on display. It is a commemoration to grief and to loss, but at the same time there is something inherently political in radical vulnerability. Yet another of her works, ‘Witch Hunt III’, which began in 2009, takes up another entire room. It incorporates a large canvas tent, painted with women on the outside, found objects, textiles, film footage, and on the inside of the tent is a small beaded Goddess. As a physical and creative manifestation of her identity as a Roma woman, it combines her own lived-experiences but also pinpoints a larger issue: the centuries of violence and discrimination against Roma women, and the contemporary issues that Roma communities face, such as expulsion and homelessness. 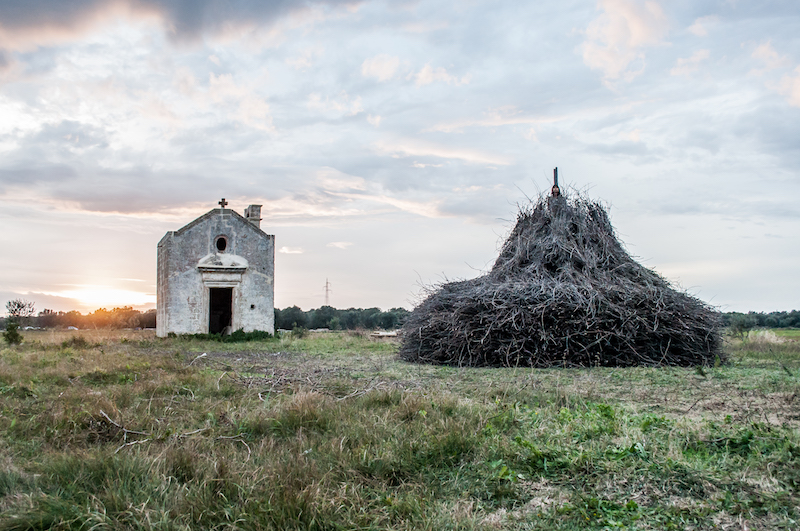 There are multiple references to witches within the exhibition–perhaps a reflection of how, even now, the idea of ‘woman as witch’ or the persecution of powerful women is perpetuated in everyday life and in politics. On the first floor there is an image of Regina José Galindo’s performance from 2016 that re-imagined a witch hunt in a contemporary context. For her performance, men and women of various ages, in present-day jeans and t-shirts, piled twigs and branches to create a large bonfire, layer by layer. By enacting construction for destruction, she is forcing the viewer to acknowledge the horrifying historical realities of witch-burning, and the parallels it has with foundational tenements of the patriarchy.

As demonstrated in ‘De-Heimatize It!’, there is no homogeneous way to claim place. There is no simple solution that will do away with centuries of violence, histories of exclusion and subjugation, which extend into the present day. Furthermore, the multiplicity of works, and the multiplicity of perspectives by extension, upends the Western, historical, institutional perspective that there is one single linear “truth”, or one “correct” way of looking at the world. This show is a celebration of both multiplicity and solidarity. In the current political climate, where nationalism is steadily on the rise, we should all listen to the call to ‘De-Heimatize It!’.