It’s not without reason that biennials have reaped their fair share of criticism. For all their worth in unpacking complex topics and making the arts an economic engine, they also encourage a jet-setting culture, precarious project-based employment and, like many large-scale art events, are dependent on volunteers and underpaid interns: a state of affairs that has increased the currency of terms like “biennial burnout.” Moreover, their staging of layered sociopolitical issues may seem somewhat disingenuous, since the biennial structure can exacerbate the very problems engaged by participating artists. How do you make a biennial that focuses on decolonization, for example, when the biennial itself might be a toxic occupier? 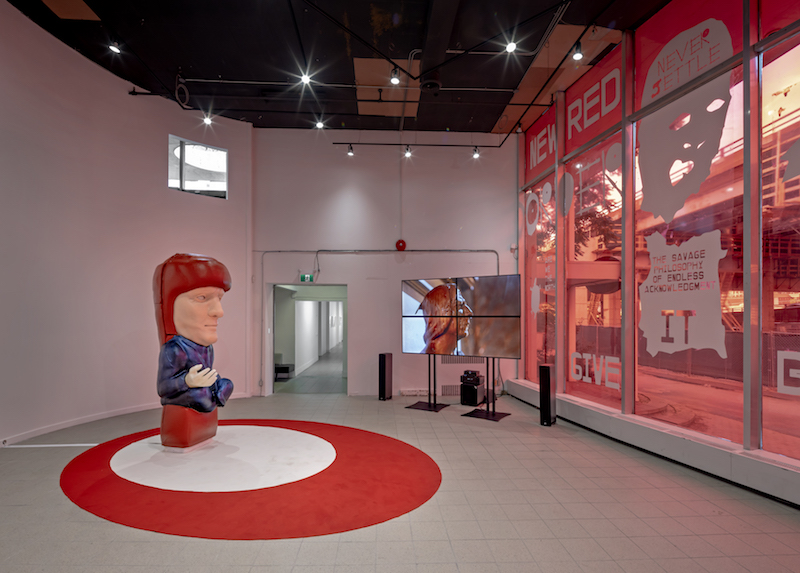 All this begs the question of whether Toronto’s fledgling event is already outdated before it even gets off the ground. To make matters worse, biennial burnout could just be the least of its problems. While firmly rooted in an indigenous context, the event opens in a province run by a government that is almost a carbon copy of America’s Trump administration. Ontario’s Premier is none other than Doug Ford, brother of Toronto’s late “crack mayor,” Rob Ford, who gained international notoriety for his drug abuse and racism. Ford’s recent decisions include a cut to arts funding and education, including disabilities and indigenous programs. This forced the biennial organizers to flip the usual model of 80% government funding and 20% private funding the other way around, leading to a number of urgent questions. How can the biennial define itself and achieve sustainability in this environment without compromising its own mandate? Can it do so while avoiding the usual pitfalls of large-scale international art events?

Candice Hopkins, who, with co-curator Tairone Bastien, organized the biennial and, to maintain a sense of continuity, will remain on board until 2021, knows she is working in an imperfect system. She is also no stranger to planning large-scale art events. Hopkins was on the curatorial team for Documenta 14, an ambitious project that overshot its mark. Not only did it run a controversial deficit, but it also garnered criticism for replicating the same colonial tendencies it was hoping to undo. Like many curators, she has to navigate the difficulties of insufficient funding and imperfect funders. In a telephone conversation she told me that despite their selectivity with funders, a mining company became one of the supporters anyway. Balancing economic power with cultural critique is a fine balance at the best of times but, in her curatorial approach, Hopkins hopes to stay in the lighter zones of the grey area. 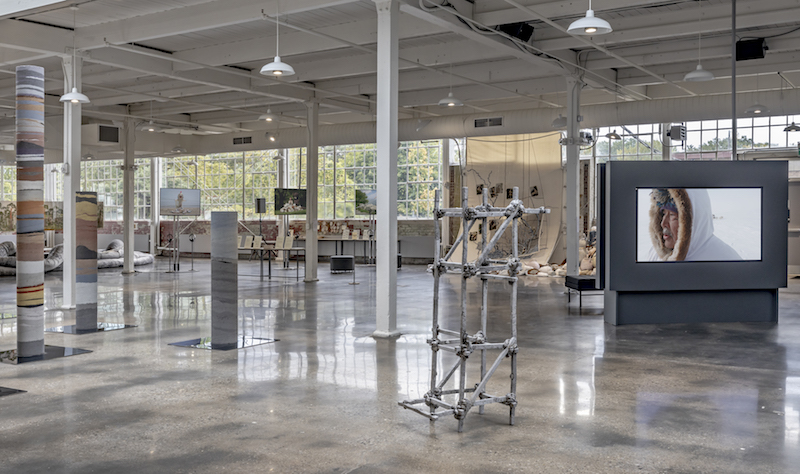 This approach could be described as holistic, in that Hopkins avoids privileging the star artist and works to create a context that drills through the surface gloss of the art world. At very first glance, this is apparent in the size of the event. In comparison to other biennials, this one is relatively small, and some of the programming piggy backs off of existing shows in the city, such as the Hajra Waheed exhibition at the Power Plant. Though there are international artists in the show, the Canadian content and the community projects could make the event feel somewhat provincial, though I mean that in the finest possible way. “Partnership was privileged over territorialization,” Hopkins explains. “A biennial can have the unfortunate effect of syphoning funding from other institutions, thus paradoxically impoverishing the local culture it is intended to serve.” “What will ensure the sustainability of this biennial,” adds Bastien, “is its commitment to enriching the place it is in, rather than using the local as a means of attaining an international spotlight.” The expected 400,000+ visitors from outside of Toronto can therefore expect a unique experience, rather than the déjà vu often felt at international shows, as if one were seeing a replica of something with no original. 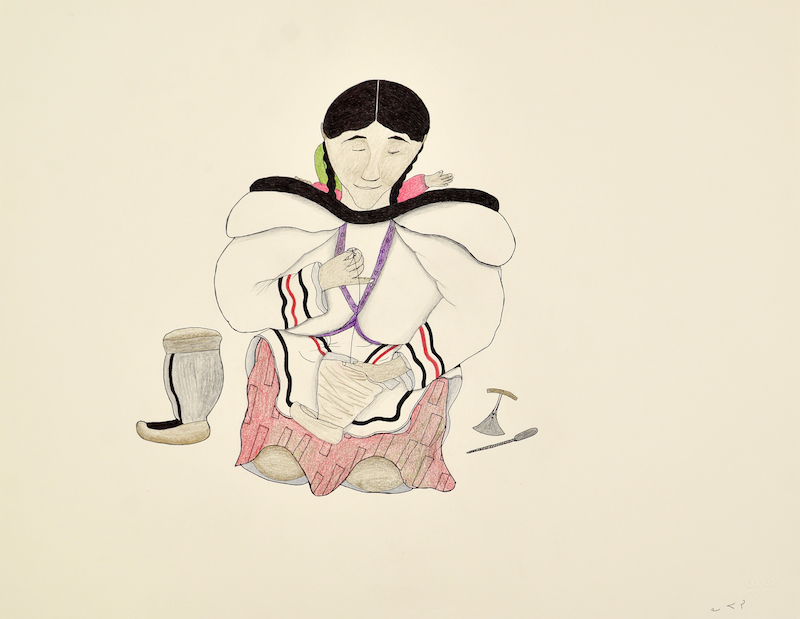 The anchor of the biennial is Toronto’s changing shoreline, as both physical reality and metaphor. It serves as a lens onto the irrevocable changes inflicted on specific locales, and how their respective visual cultures have developed in response. One way of doing this is to build generational context into the formation of visual languages, as shown by the drawings of Napachie Pootoogook, the mother of Annie Pootoogook, an Inuit artist who, despite being propelled to worldwide fame, tragically and incomprehensibly died in 2016 on the streets of Canada’s capital city. Though the rawness and occasional brutality of Pootoogook the younger is absent, the tender and mundane depictions of daily life are just as disarmingly portrayed. Drawn in pencil crayon, a medium often used in the artist cooperative of Cape Dorset, the works first come off as childish, but the mature compositions, confident lines and adult content reveal another reality.

Another example is that of Columbian artist Wilson Rodriguez, whose work is informed by his father’s intimate knowledge of plants. After being forced to leave his home in the Columbian Amazon, Abel Rodriguez, whose indigenous name is Mogaje Guihu, began to preserve his knowledge through drawing. Published as an illustrated book, the meticulous drawings now serve as a record of flora rendered inaccessible due to guerrilla warfare. Featured in the biennial are the father’s and son’s pictures, appropriately placed at opposite ends of the Small Arms Inspection Building, a former hand-held weapons manufacturer, as if to highlight the coldly indifferent unfolding of events between two generations. Together they will create a new video work on the perception of plants for the biennial in 2021.

The most impressive exhibition space was a former Volvo dealership on the far eastern end of the waterfront. The building, previously unused due to water damage, is located beside the massive, elevated Gardiner Expressway, which itself is partly obscured by scaffolding due to renovations. To the west are new glass condominiums, arranged like transparent lego blocks on the coast line. To the east one can still see an industrial wasteland. The dealership sets a dramatic stage for the show. The car showrooms, the tiny windowless offices, industrial car lifts, the black trace of Michelin tires imprinted into the hallway floors all give the impression of a post-western, post-industrial dystopia in which everyone has to figure out how to pick up the pieces. This scenario might not be far from the truth. In a trend that shows no signs of slowing down, Volvo was sold to Chinese auto giant Geely in 2010. Today, China is vying to be the undisputed leader in the digital revolution and, backed by a lack of data privacy protection and the single-mindedness of a totalitarian state, it’s not unlikely they’ll succeed.

What sort of world that success will take root in lies at the heart of the biennial. Between car lifts runs a documentary by Susan Schuppli, a snippet of a larger project on ice cores as accurate records of the chemical waste produced all over the world. The cores serve as what Schuppi calls material witnesses to not only pollution, but the physical residue of politics and warfare. At the very back of the exhibition space Shezad Dawood presents a bizarre tale of sodomy as an allegory for civilization. Between dramatized scenes one sees archival footage of whale hunting off the cost of Newfoundland, a witness to the short-sighted predation of settler culture. “What is really civil about civilization?” is a question many of the artists seem to pose. 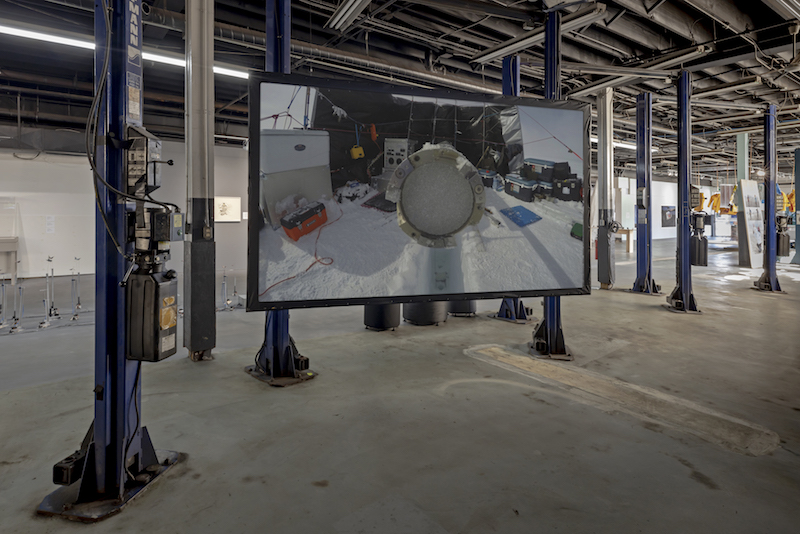 The question is essential to decolonization, which is something the Toronto Biennial tackles not only in its critique of culture, but in its organizational structure as a whole. Underpinned by an indigenous brief written by artist and advisory council member, Ange Loft, it plants seeds that are meant to sprout between the cracks of the current neoliberal art system. Coupled with its manageable size, comprehensive curating and singular approach, the biennial is built on values of sustainability rather than the marketability of spectacle. How it develops into the future will depend on the changing landscape of politics and funding, though, between a populist government and worldwide biennial fatigue, the organizers have already started in the deep end. This is a good sign that the event will not just stay afloat, but create stable ground for future growth.