The group exhibition ‘analog histories in primary colors’ at neugerriemschneider—featuring work by Mike Nelson, Sharon Lockhart and Simon Starling—is a contemplative exploration of the temporal nature of industry. The exhibition reflects on industrial societies that left machinery abandoned and defunct, and the implications of these objects as memorials to the past. Through a mix of media, both sculpture and photograph, and the artists different interpretations of the theme, the exhibition offers multiple entry points into the position of man’s relationship to industrial work. The eponymous primary colours are subtly woven into the exhibition, with each of the artists incorporating either yellow, red or blue. 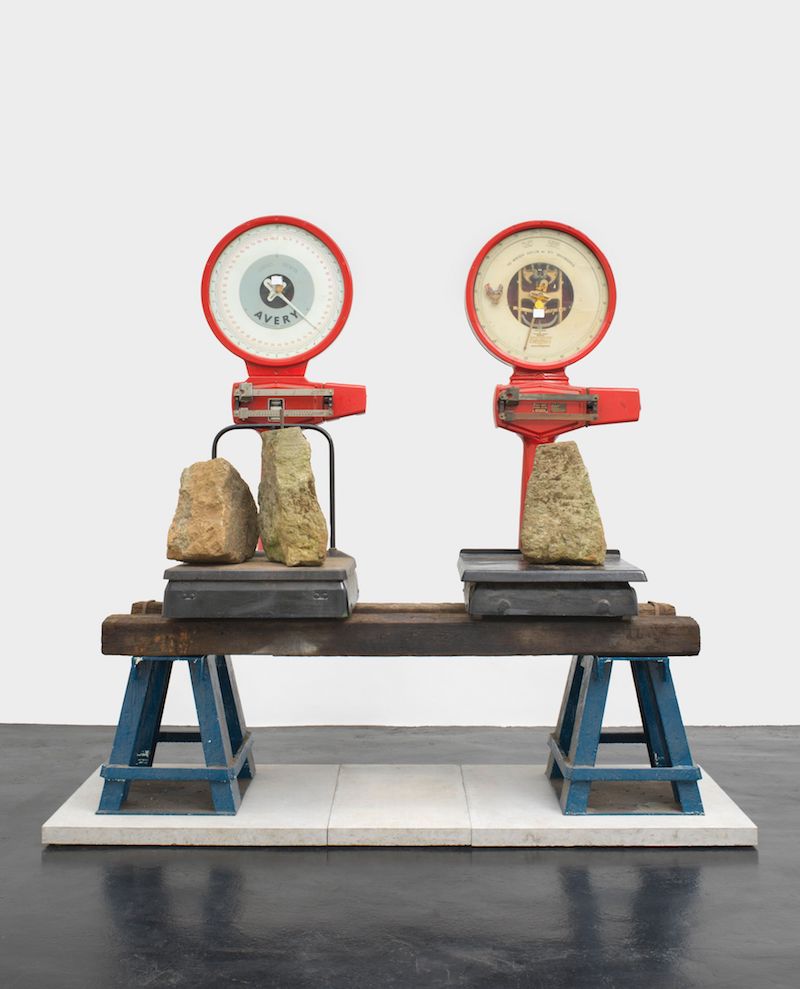 Against the white gallery walls, Nelson’s striking sculpture ‘The Asset Strippers (staddle stones on double scales … metric and imperial)’ appears heavy. The objects that make up the sculpture are remnants of Britain’s industrial and agricultural past: Nelson sources decommissioned machines from bankruptcy auctions and salvage yards. In an altered readymade, bright red scales sit upon blue trestle legs. The staddle stones, which were originally used as foundations for granaries, are weighed on the scales. The sculpture takes on an anthropomorphic stature with the two scale dials as faces and the rest forming the bodies. Taken out of context, and presented against the cold white wall, the machinery becomes something fascinating, something to admire and critique rather than to physically use. It’s strange to see these tools of industry repurposed as a ‘do not touch’ sculpture in a gallery and preserved as artifacts. 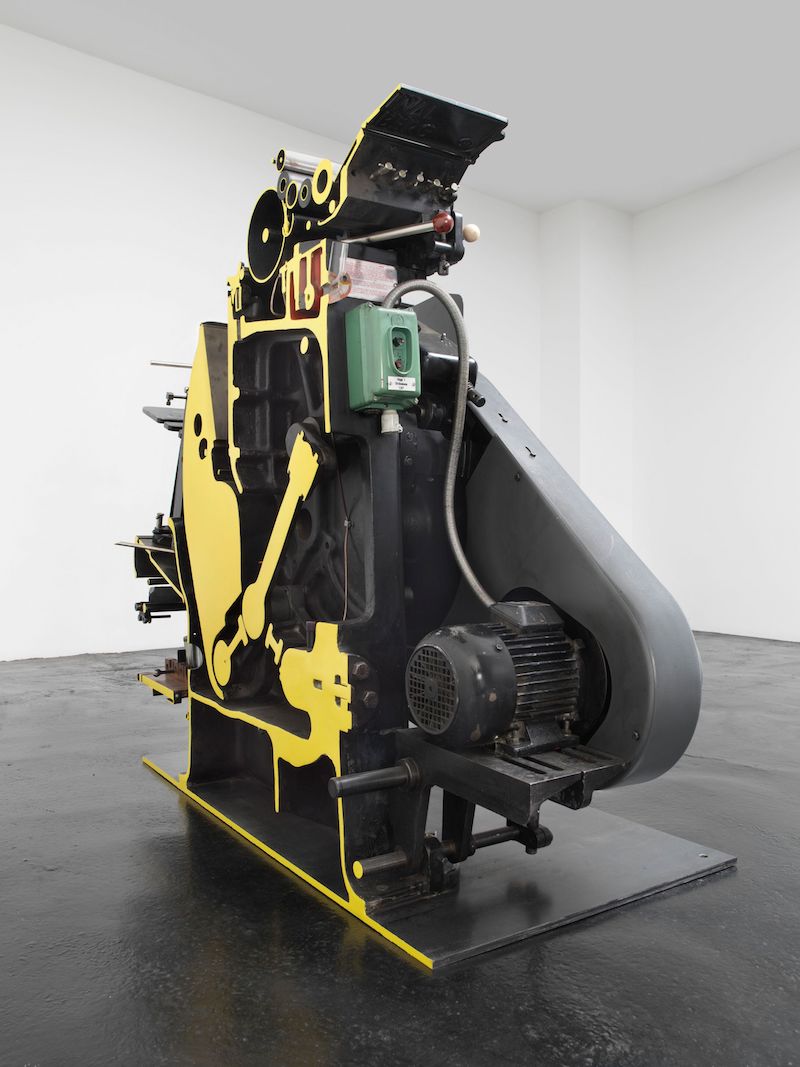 Simon Starling: ‘Half A4 (or King and Queen),’ 2018-2019 // Photo by Jens Ziehe, courtesy of the artist and neugerriemschneider, Berlin

In a similar way, Starling’s ‘Half A4 (or King and Queen)’ recalls an earlier time through an adapted readymade. Originally a Heidelberg printing press, the machine has been cut equally in half down the centre and painted yellow inside. The colour is eye-catching: yellow is often used in museums to highlight details of technology or dissections and demonstrate how things work. In this case, the yellow acts to show where the printing press was cut. The paired figures present throughout the history of sculpture are here imitated, with the printing press now as a coupled sculpture. The name of the piece takes its inspiration from Henry Moore’s sculpture ‘King and Queen’ inspired by Egyptian female and male statues.

Sharon Lockhart’s photographic series ‘Lunch Break’ adds to this discussion by capturing the everyday lives of her subjects, who work at a shipyard in Bath, Maine. Lunch breaks were moments during the efficiency-driven production day when workers may act as individuals rather than cogs in an anonymous industrial machine. In ‘Old Boiler Shop: Proud and Shaun,’ the men sit in a composition reminiscent of classical painting; with the man on the right showing his side profile as the subjects face each other. The plastic bag and cling foil that wrapped and contained their lunches can be seen, and we can imagine them preparing it at home before their day, or maybe in the evening of the previous day. 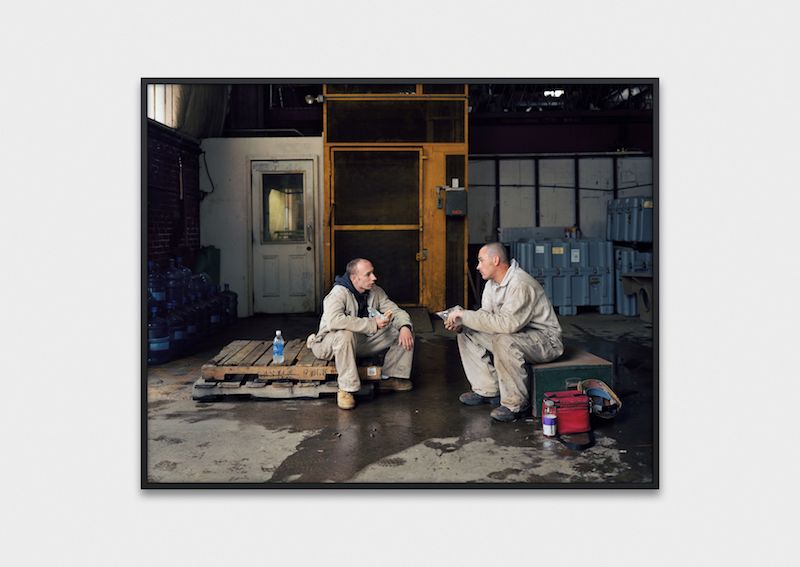 Lockhart’s process is collaborative. She engages with her subjects by explaining her process, and they explain theirs; which, in this case, may be their working day. This is reflected in the titles of her photos, which contain the names of those photographed. The tryptic ‘Stephen Bade, Electrician,’ for example, is three different views of the same red lunch box. It has stickers on it, hinting at the owner’s personality and interests. Unlike the objects used by Starling and Nelson, which now belong to them, after photographing the lunch box, Lockhart gave it back. We may presume that it is still in use – as you read this, Stephen Bade might be eating lunch from this very lunchbox. In this sense, Lockhart connects us directly with the world of the shipyard in Bath.

The sculptures complement Lockhart’s photography and, inevitably, the exhibition creates a dialogue between the works. While Lockhart explores the identity of the workers, the sculptures by Nelson and Starling inspire contemplation on the historical industries of Britain and Germany. All three reflect on the temporal nature of industrial work, and consider manual labour in the framework of sociocultural changes under global capitalism. 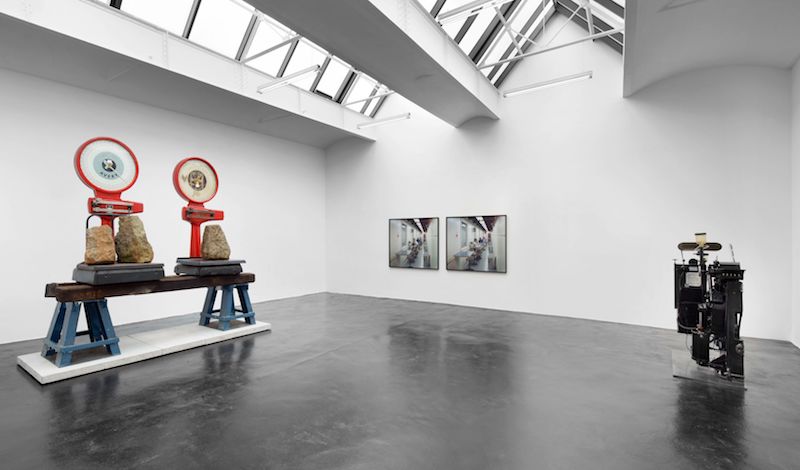