The exhibition ‘The Long Term You Cannot Afford. On the Distribution of the Toxic’ at SAVVY Contemporary uncovers the different forms and meanings of the toxic. Nevertheless, this exhibition is not just about the material nature of toxic substances, but rather it is about toxicity as a whole, considered metaphorically. The curatorial text puts it precisely: “To truly consider the global distribution of the toxic – the direction of its movement, the immeasurable violence left in its wake, and the struggle to hold down accountability for its relentless force of destruction – means to push the recognition of how much of the world exceeds the Western capitalist conception of it.” We live in a world characterized by structural inequalities and these also determine one’s exposure to the toxic, as the exhibition argues and also accurately demonstrates through its exhibited artworks.

Some of the works tackle the issue of ‘waste colonialism.’ This term, coined at the end of the 1990s, refers to the practices of sending waste, including toxic waste, to under-developed countries with the aim to lower the costs of waste management. This is, for instance, demonstrated in the sound-documentary installation by Anja Kanngieser. Their work ‘Mining the Deep’ tells the story of deep sea-bed mining in Papua New Guinea. The work is presented in a small separate room with two headphones and two comfortable bean bags chairs, and a printed map framed and placed next to the chairs against the wall. The sound recording captures the voices of the local communities directly affected by the extractions, documenting their dialogue with campaigners and government leaders. The sound design was produced by Kanngiser, in collaboration with Daniel Jenatsch, and produced together with Joey Tau. This work brings to the exhibition another sensory level of perception, relying primarily on the auditory in a room with few distractions. In this sense, ‘Mining the Deep’ is complemented by the work of Stephan Thierbach, ‘The Sweat of the Soil,’ which focuses on an olfactory experience.

Stephan Thierbach: ‘The Sweat of the Soil’, 2019 // Photo by Hannes Wiedemann

Thierbach, during the duration of the exhibition, presented a series of performances, which are understood as “a cleansing ceremony on soil extracted from an old black water treatment basin in Rieselfelder Berlin-Buch.” The outcomes of these performances, consisting of the eau de toilette flacons, are exhibited as the installation. These are the scents produced using a potato steam cooker from Poland, with the aim to allow the soil to sweat all the toxins out. The work refers to Eastern sauna culture and reflects on care and wellness, as well as two binary ideologies presented in this part of the world in the last century. The eau de toilettes are exhibited in the round arches of the wall: visitors are able to spray the smell from the flacons on themselves or use the ‘perfume testing strips.’ The resulting smell is sweet but strong and unpleasant, precisely how one would imagine the smell of the soil’s sweat to be.

Jonas Staal’s exhibited installation ‘Redistribute Toxicity’ comments on the toxic waste site that was a result of a deal between former West and East Germany. Staal’s installation consists of a chart that talks us through these historical events chronologically. We learn that after a wave of environmental protests against the construction of a second waste incinerator in West Berlin, it was decided and subsequently contractually agreed upon, in 1972, that toxic waste would be sent to East Germany. In 1979, then, Schönberg landfill became the largest toxic waste landfill, uniquely supplied with Western waste. Despite protests, the landfill was functional until the fall of the Wall. In 2006, the University of Greifswald published the first report that confirmed an 80% higher cancer risk for employees who worked at Schönberg landfill. The installation is tongue-in-cheek, showing small bags of seeds from the plants collected at the waste site. The participatory element of this work—inviting the visitors to take a bag home with them and to ‘redistribute toxicity’—is darkly humourous in its call for “reciprocal care through redistribution of toxic inheritance.”

The intersectional and discursive tone of the exhibition is already established at the entrance, with a work by Mexican, Berlin-based artist Julieta Aranda. Her piece ‘Not This. Come With. Fear Nothing’ consists of phosphorescent painted text illuminating a long dark corridor and cleverly invites visitors to consider important questions. Aranda’s work problematizes the notion of universal scientific knowledge, as we’re led to the main exhibition room. The scrawled, handwritten lines create a dizzying and disorienting atmosphere, forcing visitors to leave the outside world behind and enter a new space of affect where meaning must be deciphered differently. As the work suggests, “information is accessible and possible to read, but it will never be accessible in its entirety.” When I visited the exhibition again, the lights in the corridor were on and I was told that the texts were “charging.” As the text only appears in darkness, I couldn’t read it at all, and could only make out faint paint strokes on the white walls. 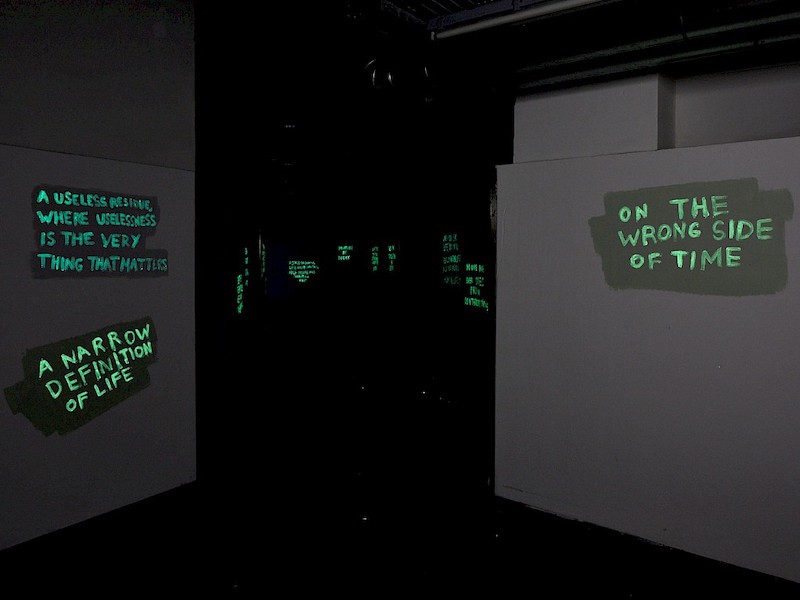 Julietta Aranda: ‘Not This. Come With. Fear Nothing’, 2019 // Photo by Hannes Wiedemann

Characteristic of SAVVY Contemporary’s programming, the focus of this exhibition is broader than just chemical toxic substances, and comments on the toxic in society more broadly, as well as the hegemonic structures within it. If, as SAVVY Contemporary’s curatorial team rightly observed, “no topic is an island” under neoliberal capitalism and must therefore be discussed as part of bigger structures then, in this case, “no toxic is an island.” The exhibition makes use of considered spatial design to engage all senses. And, through an accompanying program of workshops, discussions and performances, visitors are given much more than that.