Heba Y. Amin is a creator, but also a recycler, reaching into the depths of history to extract snippets—images and moments—and repurposing them in her own image. She is purposeful with her selection, finding a specific political or historical moment, and following its thread to expose the absurdity inherent in colonial and imperialistic projects. Her genre-defying works examine the confluence of politics, technology and landscape and, ultimately, attempt to rewrite the canon and overtake the narrative. 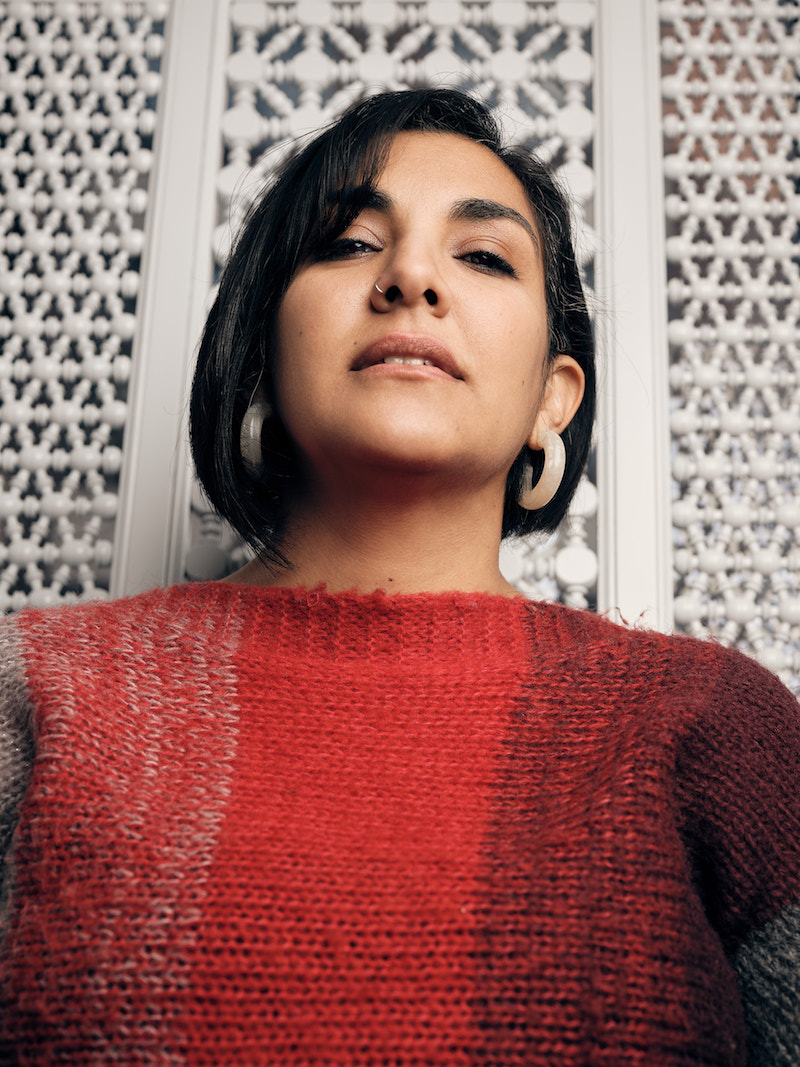 In her Kreuzberg studio, this tenuous balance between mimicry and subversion is immediately apparent. It is not just a room of planning, but of action, both artistic and political. Amin herself stares at us directly from multiple walls, pictured in large-format prints, her gaze challenging ours, her hair slicked to one side, her shoulder pads voluminous, demanding attention. The images, from two of her more recent bodies of work, place the artist herself within the role of the authoritarian figure, of the European surveyor and bureaucrat, replicating the original shots with herself as the subject. 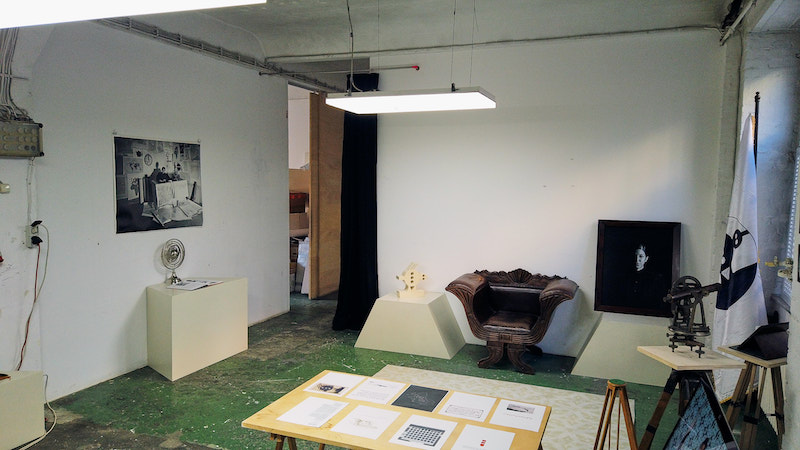 In one photograph, she has re-framed a portrait of engineer Herman Sörgel, who had proposed to drain and reroute the Mediterranean sea to join Europe and Africa, as outlined in her work ‘Operation Sunken Sea.’ “The idea is to erase him from history,” she explains, holding the picture of Sörgel printed in a hardcover text, just below her own portrait. The similarities are striking: the gaze, the large desk that speaks of domination, the maps that are tacked to the wall behind them. Yet there are still glimpses of Amin within her re-staging: she has chosen another set of Islamic maps, for instance. “The idea is to completely plagiarize all his material and claim it as my own—in the way that you know these projects are about consuming other peoples’ content, belongings and land—and to erase him out of history. So when you look up Herman Sörgel, all my images come up.” In her work, she often uses irony and absurdity, but acknowledges that one must be extremely aware and careful in this context to not appear blasé. Positionality, in this way, is key.

Beyond the prints on the walls, the furnishings of the room, also a part of her artistic practice, follow this vein of mirroring and subversion. Arranged like a bureaucratic office, on the far wall sits an imposingly large wooden chair, or perhaps throne is a better word. “I don’t know how to be serious,” she laughs as we take a photo of her in the chair, her arms raised on the absurdly high armrests—a stark contrast to the sombre stare in the print above her head. A gesture to her ‘artistic double-life’ of sorts, as she embodies these men and these settings, these characters and moments in history. She is taking these positions of power, and making them her own. 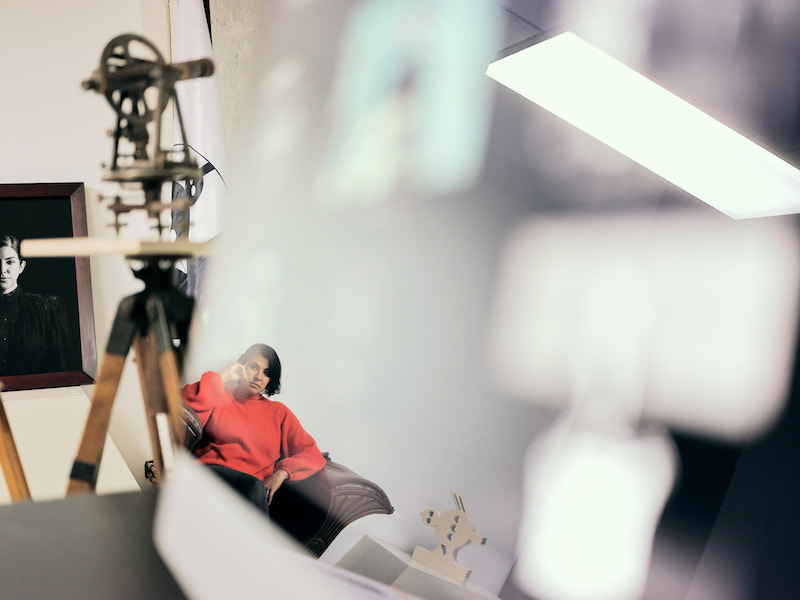 Surrounding the chair-cum-throne is a flag and a rug, both emblazoned with a symbol that is a recreation of the map of the Mediterranean sea. On the windows are intricate shades, painted white. They were commissioned specifically by Amin on a trip to Egypt, created by craftsmen, and used in her exhibition ‘Operation Sunken Sea’ in the 10th Berlin Biennale. The shades, in this way, have multiple roles: they are representative of a dying art, with less and less craftspeople to continue the tradition and, simultaneously, they enact Amin’s emphasis on working with architecture.

Despite being trained academically as a painter, Amin’s works span different genres and mediums and her studio acts as both a stage and a research facility. On the opposite side of the room from the chair, bookshelves line one wall, large texts and tomes. Her desk is dominated by a desktop computer, and fluorescent lamps hang overhead, emitting a clear bright light that mimics an office building or a laboratory. The room is a physical manifestation of the extensive amount of research that her work requires, a space of contemplation, of following a thread and of delving in, so to speak: a place of complete academic immersion. Amin explains that she pours through archives until she finds a moment or event that interests her, and follows the thread of thought, exposing the absurdity that is inherent in countless schemes. 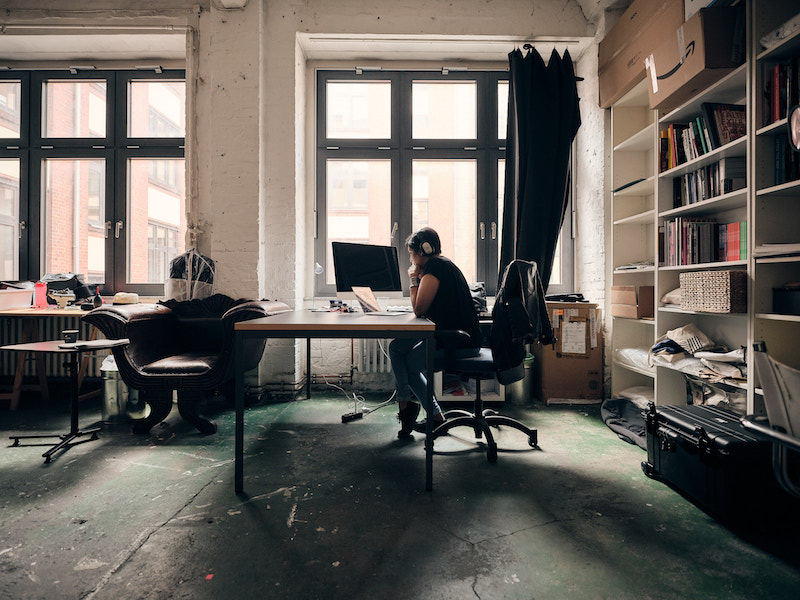 Other than the desk, a few wrapped panels, some objects in a wooden crate and a bench to one side, this side of the room is relatively sparse, which also gestures towards the work that takes place outside of the studio space: the collaboration that occurs with many of her multimedia projects. She tells us that within her practice, she is continuously “looking at the tools that make and that create. I like to be in the process of making—to be there to understand it. I don’t like the idea of being disconnected from the work I’m creating.” For instance, a work from her current show ‘Windows on the West’—a hand-woven tapestry that recreates the first documented photograph taken on the African continent—was created with help by the Textile Prototyping lab in Berlin. By creating in unison, by learning and by collaborating, she reflects the self-as-artist but also the self-as-subject, as learner. This emphasis on collaboration effectively takes away the primacy of one method of creation or of singular authority.

The importance she places on extending her work beyond the studio into the public is exemplified in her most recent exhibition, at the Center for Persecuted Arts in Solingen, particularly in her work ‘Marseille’s Pyramid and the Devil’s Garden: Part 1.’ The work is a 1:1 recreation of a pyramid erected in Northern Egypt for the ‘Star of Africa,’ Hans-Joachim Marseille, a WWII aviation pilot engaged by the Nazis. The viewer cannot escape this past: the pyramid is in the centre of the gallery and facing it is a corresponding film of the memorial in its actual surroundings in Egypt, where it still exists today. In order to navigate the exhibition, it is necessary to move around the pyramid and its echoing connotation of imperialism and colonization. Amin extended this critical dialogue into the public with a live conversation with Roberto Blanco, now a famous Schlager singer, who once acted in ‘The Star of Africa’ in 1957—a film that reframed the story of Marseille in a positive light. By addressing and attempting to rewrite these forgotten or perhaps conveniently brushed aside histories, her works are proactively counteracting the subtle and pervasive machinations of normative colonialism. 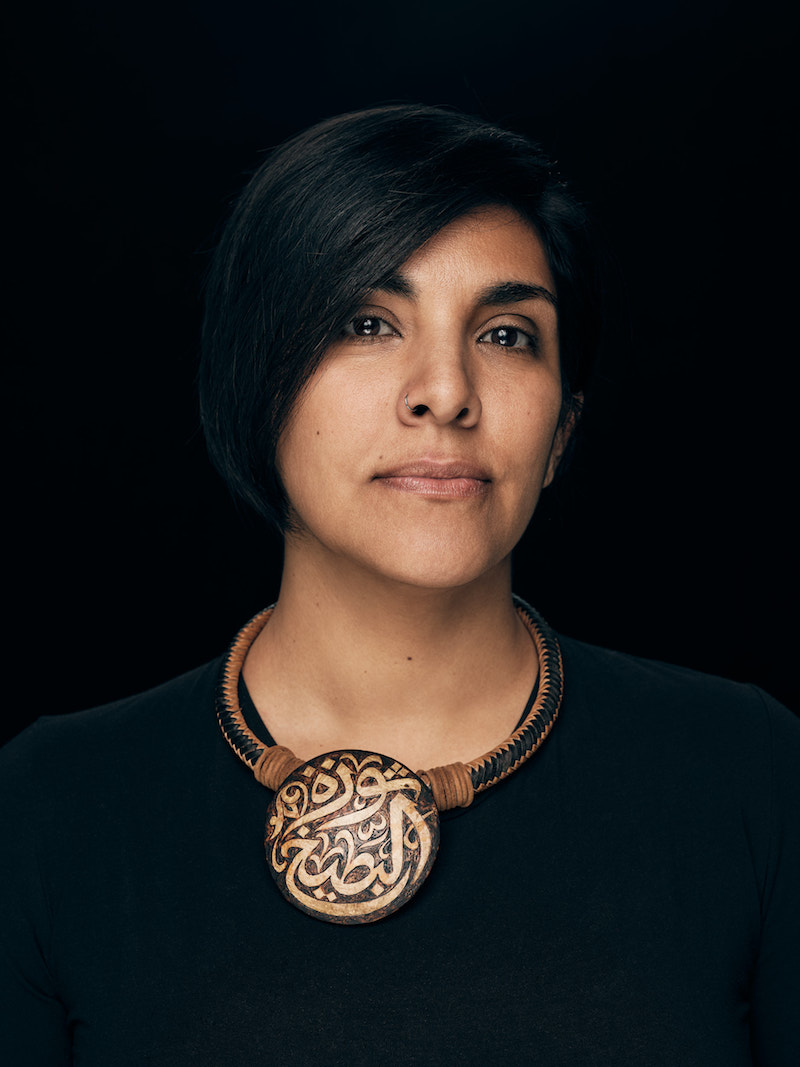 Many of Amin’s projects are listed as ‘unfinished.’ This is perhaps a representation of how interwoven her work is with everyday life, how her projects extend beyond a static singular work and instead are in constant fluctuation, as the threads and roots continue to grow. This process, of finding, erasing and rewriting is a constant dialogue. The ways in which we can work against history are still being articulated. She tells us that currently she is working with developers to try and overtake Herman Sörgel with her own works and pictures. Personally, I cannot wait to Google ‘Herman Sörgel’ and to only see images of Heba Y. Amin appear on my screen.