Caline Aoun is the winner of Deutsche Bank’s Artist of the Year 2019 Award. Her current exhibition, ‘seeing is believing,’ is an abstract meditation on ways of expressing intangible processes – such as data transfer and global data flows – in the form of tangible, material works of art.

Aoun was born in 1983 in Beirut. She completed her studies abroad, at Central Saint Martins and the Royal Academy Schools in London, and later received a Professional Doctorate in Fine Art from the University of East London. Today, she plays a crucial role in the Middle East art scene, as well as that of Europe. 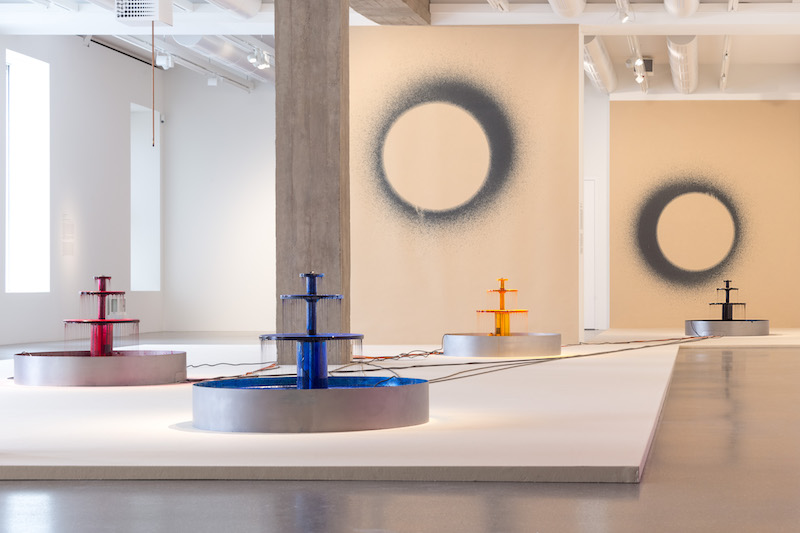 The most striking element of her exhibition at Palais Populaire in Berlin is the four-fountain installation ‘Infinite Energy, Finite Time.’ The fountains consist of three-tiered plates, with ink constantly spilling over the edges and running down into a pool collecting in a basin at the bottom. Each fountain flows with ink in one of the four CMYK model colours used in printers; a tar coloured black, cyan, magenta and yellow. Around each fountain small droplets that have bounced out of the fountain stain the white sheet on which they sit, the circles complementing the ones on the walls above.

The dripping ink creates constant noise in the space, which we are unable to ignore. Aoun reflects upon the non-stop flood of images and data that pervades in the digital era. She considers it a dominating “noise” and so sought to make this noise a reality in the space. The sound of the fountains provides a backing track to Aoun’s artwork, dominating the experience to convey this constant flow.

The transition from analogue to digital has simultaneously meant the transition from paper maps to Google maps, from communities to online communities, to online friends and online dating, while our images are stored on a cloud. None of it is tangible, yet, data transfer is closely linked to our reality and shapes entire social systems. In the exhibition, Aoun provides a material environment to grasp these otherwise intangible connections, while arguing that this constant hum must cease so that we have time for contemplation. 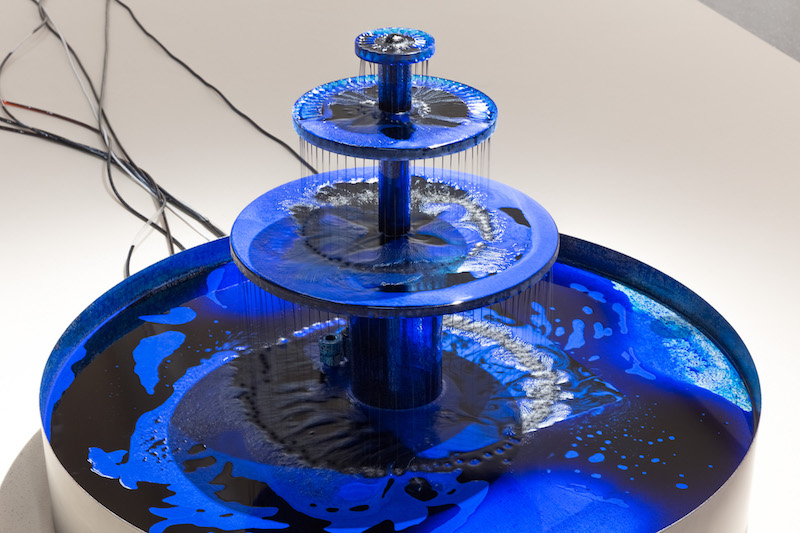 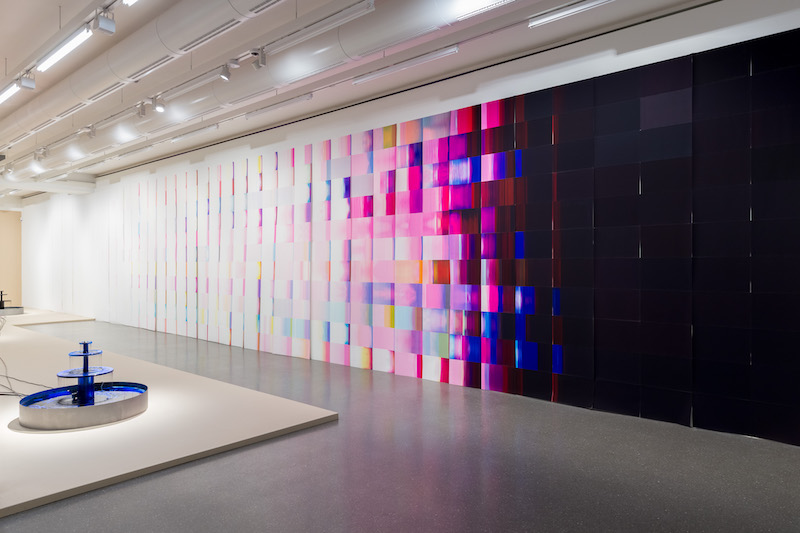 Despite Aoun’s interest in digitization and the internet, the materials she uses in her process are not computers, tech gadgets, smartphones or VR; to create ‘Contemplating Dispersions’ she used a simple inkjet printer. In this piece, she conveys data transfer using particles of ink. She overloaded a printer that was low on ink with data and its attempt to print resulted in a work of art covering one wall of the gallery. You can see how the printer struggled to complete the task as it sputtered out the images. What starts as a thick inky black covering of the A3 sheets slowly dissipates and splinters into streaks of magenta, cyan and yellow as the ink runs out. The gradient effect matches the colours spewing from the fountains. Taking a closer look at the individual sheets of the A3 paper, the slivered gradient of colours look like beams of light or a small network of organized streaks. Eventually, only white pages remain when all traces of ink are used up. 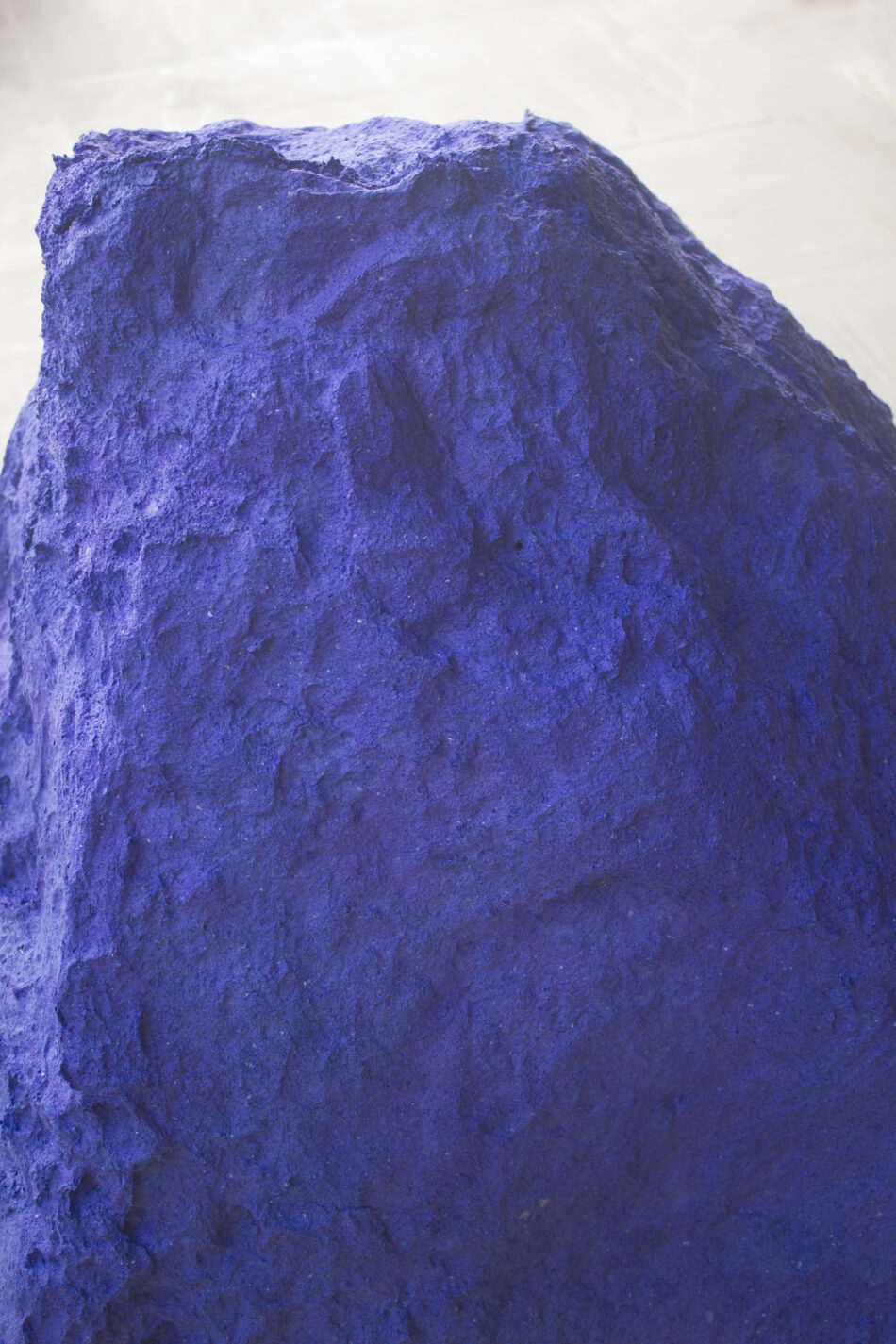 From the entrance of the exhibition you see a curious large, blue rock that sits at the back of the gallery. It is inspired by a rock found in front of Aoun’s home in the mountains near Beirut. The stone has experienced several geological eras and all of recent history – including the digitization of data – yet it remains untouched. The one in the gallery is made from a carbon copy. The description next to the work reminds the viewer that “carbon copy” was originally the term used to designate a copy made by using carbon paper, but today “cc” in an e-mail denotes copying people in as recipients. This simple blue stone explores digitization and the relationship between human and geological time. 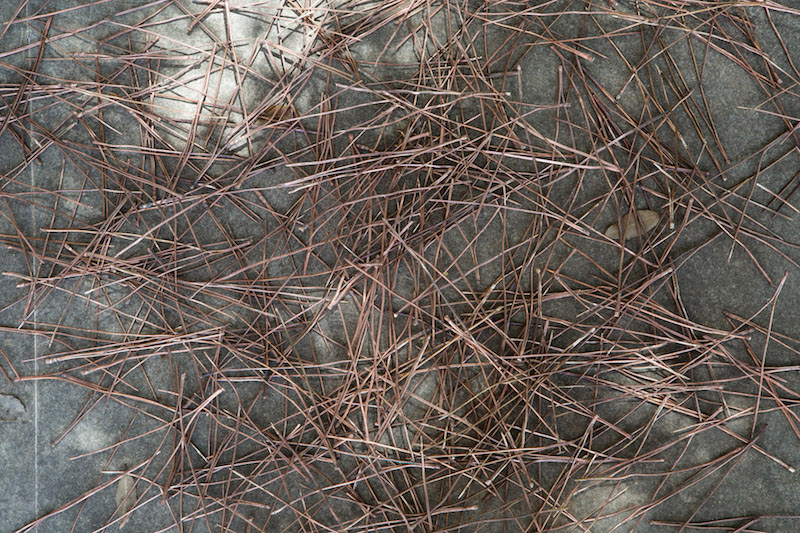 ‘Pine Needles’ is another work inspired by nature. Aoun captures fleeting moments in time; the fleeting moments of data, and of nature. Usually, pine needles are trodden on or swept to the side, but Aoun created this piece with the pine needles from the doorstep of her studio. She cast her found pine needles in copper to turn them into delicate works of art. The information is transferred from the pine needle to the copper; from one medium to another. Now they find themselves on the gallery floor, as if they had fallen there by chance.

Aoun’s vibrant colour scheme and playful, nuanced messages make for an aesthetically pleasing and ruminative exhibition. As the name of the exhibition suggests, Aoun seeks to make invisible processes visible in her vibrant artworks.