Savitri Medhatul from Kali Billi Productions appears on stage before the full house of Sophiensaele’s Hochzeitssaal. “Namaste!”, she beams and the not-exclusively-white audience responds in kind. Introducing the program’s premier in Berlin, Savitri informs the crowd that they are expected to interact; clapping, cheering and especially wolf-whistling will greatly enhance their experience of Lavani. 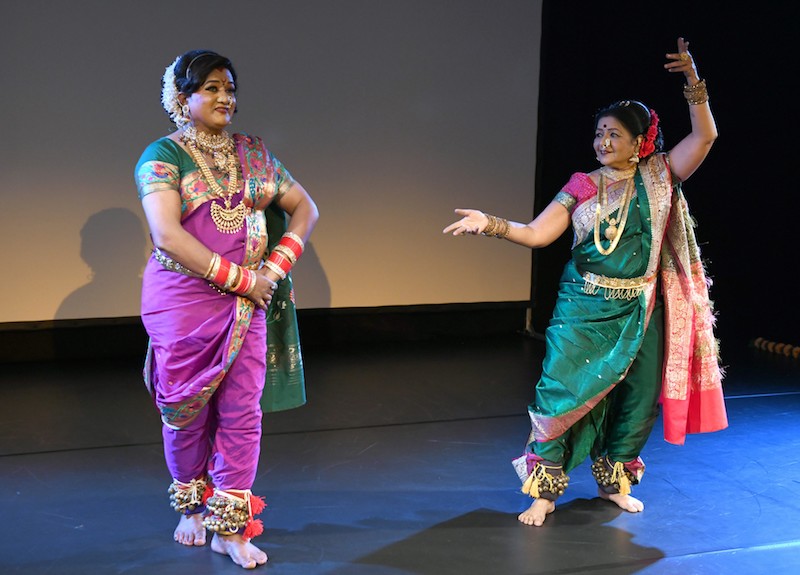 A backing track of tabla and harmonium accompanies two dancers as they step into a rectangle marked on stage by a garland of flowers. Their heads are covered by the pallu shawls of their dazzling saris and ghungroo bells strapped to their ankles punctuate the rhythms of their steps. Rows of bangles climb up their forearms, thick gold chains hang against their chests and the palms of their hands are painted a striking red, accentuating their gestures. When the dancers remove their shawls, they reveal faces thick with make-up, under heavy hair pieces adorned with flowers and more dangling jewellery. The performers encourage us to cheer with exaggerated expressions and one dancer moves her eyebrows, drawn over with thick black kohl, in remarkably suggestive ways. As they retreat from the stage to enthusiastic applause, Savitri re-enters. “You can clap when they are dancing also, and what happened to …?”, she puts two fingers in her mouth and mimes a long whistle.

‘Around the World’ defies categorisation as simultaneously theatre, dance and pedagogical performance. Lavani, we learn, is a form of folk dance and song from the state of Maharashtra. Driven by the rhythm of dholki drums, it is an expression of enthusiasm, joy and lust. While Lavani has been adopted by Bollywood and gained wider appeal, it arose amongst nomadic and matriarchal lower Dalit castes. Traditionally, girls train to sing and dance and boys learn musical instruments. Savitri tells us the ‘customers’ of Lavani theatre largely comprise of middle and working-class men and that it is considered to be vulgar entertainment. Savitri recalls that when she approached a Lavani theatre as a budding documentary filmmaker, she found a company of proud women with an acute sense of business. She had wanted to liberate them as victims of exploitation, but the women explained that the bells they wore around their ankles “are not shackles, they are our strength.” The women, well aware of the injustice of the conditions they were born into, were nevertheless determined to thrive.

While many Lavani songs were written in the 17th Century, they address themes concerned with the lives of women, desire and the male gaze that are relevant today. We are introduced to the renowned performer Shakuntala Nagarkar who demonstrates a song in which a menstruating woman politely refutes her lover’s advances. She then enacts a caricature of a high caste Brahmin man performing his ablutions; blending complex, stylised movements that remind me of classical Kathakali with actions reminiscent of vaudeville. 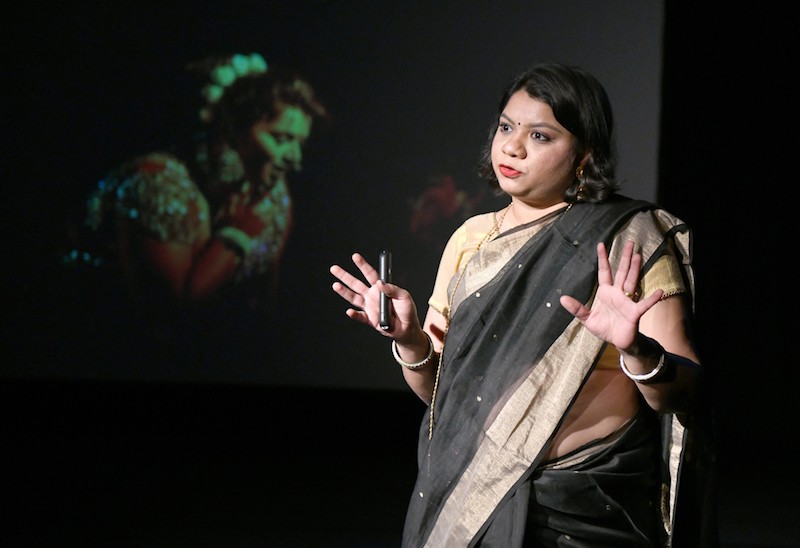 The audience bursts into applause and as Shankutala catches her breath Savitri asks her about her history. Translating her Hindi, Savitri describes how the performer accompanied her mother and aunt on stage when she was a child, before her official debut in the theatre at age 18. When asked how many years ago that was, Shankutala demurs. I would guess around forty.

Next we are introduced to the program ‘Bin Bay Kuncha Tamasha’, which translates as “without women.” In the early 2000s, the show revived an old tradition of men performing the roles of women in Indian classical dance and theatre. This so-called “banner show” that grouped together urban folk forms of entertainment, was significant to the career of another performer in ‘Around the World’, Anil Baburao Hankare.

Now in his 50s, we learn from a video that Anil began dancing in 1985, following a lucky break with a dance company as an adolescent. Later, he found a niche performing female roles, which he pursued because they were well paid. Anil recalls how many of his audiences never doubted he was a woman when he danced under the name Madhu, and that men often lined up to meet him after the show to declare their love. Later, he would perform under his real name in an attempt to clarify his gender to would-be suitors, but that led to further confusion.

We are told that the significance of ‘Bin Bay Kuncha Tamasha’ was that it switched the gender dynamic of Lavani theatre. It was no longer simply working class men watching lower caste women perform, but rather women and mixed audiences watching “men performing as women.” Anil tells us that in 2000 there were around 10 men performing female roles in Lavani, now he says there are close to 1,500.

While ‘Around the World’ was undoubtably entertaining, informative and enthusiastically received, I found its sexual politics ambiguous. Given a history of women in India being excluded from certain forms of theatre on the basis of caste, class and tradition is a revival of “men performing as women” akin to what Berlin audiences might think of as drag? Is what Anil represents as the “non-binary” the same as what we might perceive as “gender-fluidity”? So while ‘Around the World’ may have switched traditional gender dynamics and subverted the male gaze, I found its sexual dynamics remained within the scope of heteronormativity, i.e. men desiring women or women desiring men. Nevertheless, the show seems to have been effective as a politicising tool.

During the post-performance discussion the organisers of Gender Bender Festival in Bangalore, Shiva Pathak and Nimi Ravindran from the Sandbox Collective, explained how it established a safer space for LGBTQ people to express themselves. This was notable for the first few years of the festival, held annually since 2015, as laws introduced by the British Raj in 1861 to criminalise homosexuality remained effective, and were only ruled unconstitutional by the Supreme Court of India in 2018. 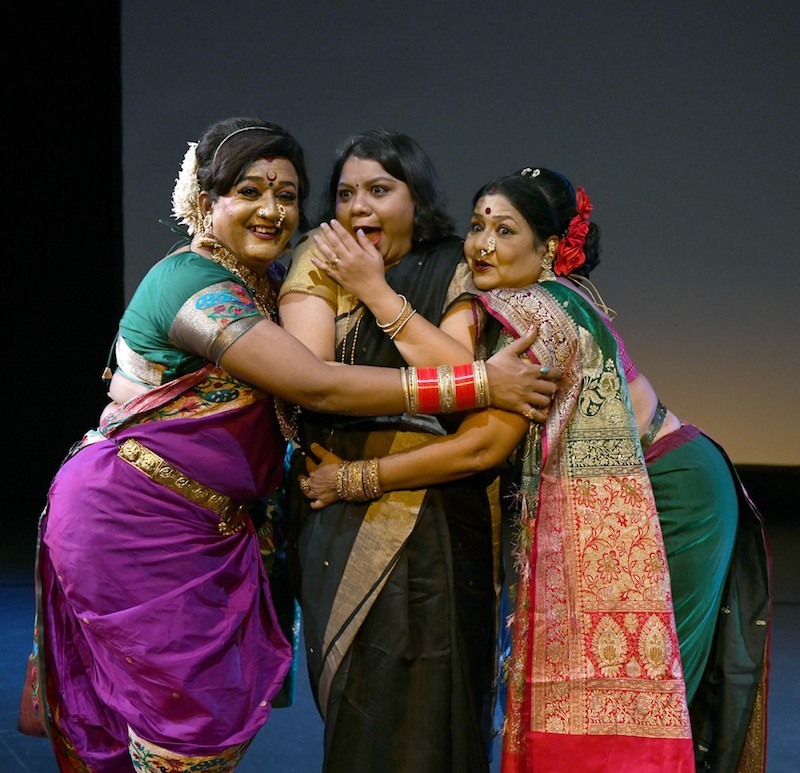 ‘Around the world’ is presented to us through multiple framings; Sophiensaele’s Tanztage program of new and experimental dance in the Western liberal cultural capital of Berlin, the Gender Bender Festival that foregrounds ideas of gender in cosmopolitan Bangalore and, finally, Kali Billi Productions, a Maharashtra-based feminist pedagogical platform. While the night’s insight into Lavani was positively received, it remained unclear whether it was necessarily “sex-positive” as one audience member quipped during the Q&A? Instead, I would offer that the program trained our queer-tinted postcolonial gaze onto performances of “the female” by seasoned professionals who have learned to exploit dynamics of caste, class and gender that in other ways repress them. During the show, Savitri would often pause to emphasise that while they were happy to travel to perform in the Sophiensaele, we should also travel to see them perform in India, underscoring aspects of contact and familiarity that facilitate commerce. Could contemporary Lavani’s popularity, then, be read as a marker of Dalit survival and resistance? As Nimi admitted when discussing how Gender Bender carefully picks its battles and partner organisations: “We must live to fight another day.”