A mesmerizing, soft AI voice greets you as you come into n.b.k. – “if you use the extract it will poison autocrats” – over a psychedelic series of kaleidoscopic flowers projected on a large screen. Hito Steyerl’s installation ‘This is the Future’ is part of a three-part exhibition at the space, which includes ‘Mission Accomplished: Belanciege’, a multi-channel video installation conceived specially for this show.

Steyerl’s work is disturbing, it looks into the future through a vision of the present, which is as bleak as it is realistic. Hypercapitalism, globalization, digitalization, augmented reality and data mining are just some of the issues she explores. 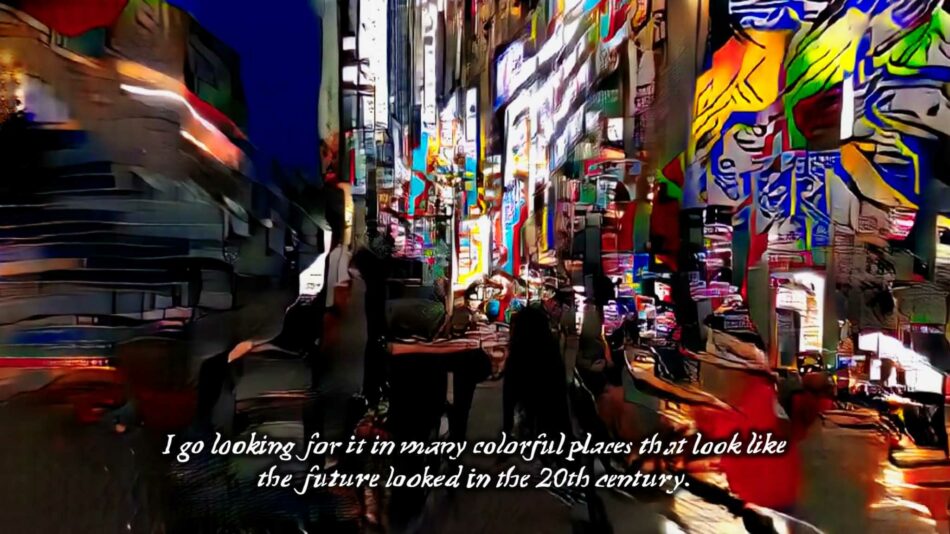 ‘This is the Future’ tells the story of Heja, a mysterious protagonist whose identity is never revealed: “A neural network is predicting what I will look like.” But you never get to meet them. False promises are symptomatic of an uncertain future and a possible reference to fake news. The narrator, a robotic soothsayer, confidently foretells but also warns that “whatever the network predicts may not be the case.”

Visually and sonorously, the repetition of uncanny imagery of nature and urbanscapes and footage of current events – including recent far-right protests in Germany – keep you in a lull, entranced and reflecting on the future. Ultimately, Heja is the viewer, they are a universal individual, like a poetic “I”. Tellingly, they ask for predictions and are forewarned of scenarios and possibilities that they choose to ignore. The warnings mirror the predicament that contemporary culture faces: global warming was forecasted, it has materialized and yet it continues to be ignored and the rise of the extreme-right continues to be a minor concern, although it is now ubiquitous. 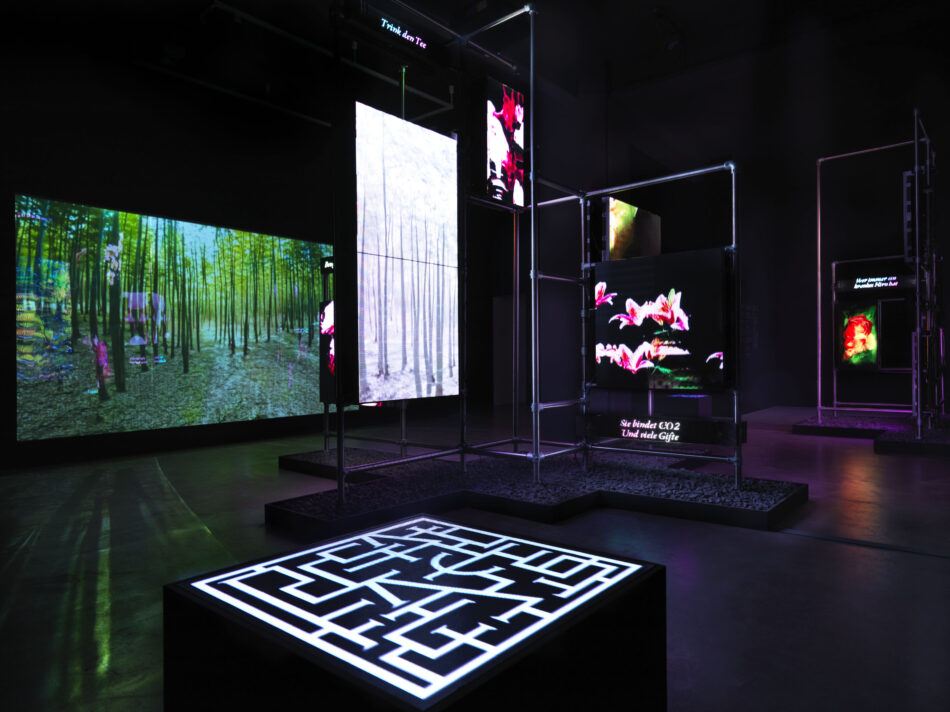 Adjoined to this first video is Heja’s garden, an installation with LED screens hoisted on metallic structures. To fully experience the installation you have to download the augmented reality app PowerPflanzenOS. The experience of viewing these structures becomes mediated by another screen: a virtual experience that the narrator quasi-foretells in the video.

The three-channel video installation ‘Mission Accomplished: Belanciege’ was first presented as a lecture-performance at n.b.k. and streamed online. Now, it is a chilling installation. The work places luxury fashion house Balenciaga at the center of a reflection on politics, culture and populism. Although there is a sense of performativity in the gestures of the interlocutors – Steyerl, Giorgi Gago Gagoshidze and Miloš Trakilović – the video details with academic precision the relationship between data mining, the fall of the Wall, autocracy in old Soviet territories and Balenciaga. 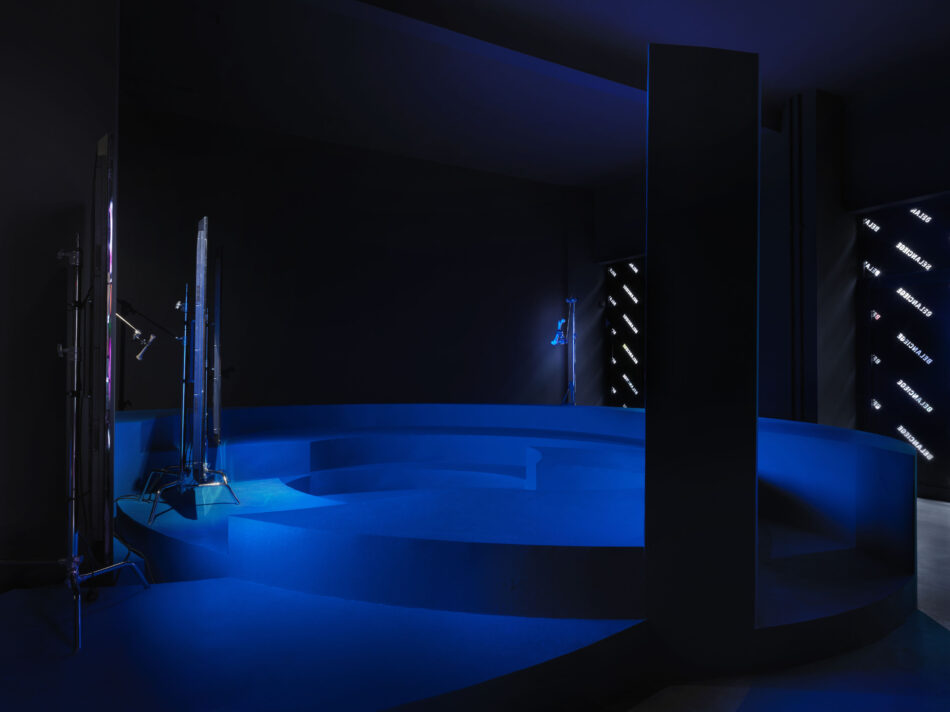 The title of the work draws on the history of these regimes and their links to oppressive sieges of cities and regions. Just like these obstructions, social media, branding, identity politics and capitalism, Steyerl argues, have us under siege. And so, Balenciaga becomes Balenciege.

Why Balenciaga? Crucially, Christopher Willey, the Cambridge Analytica egomaniac whistleblower, drew a parallel between fashion and politics in an interview with Dazed: “Politics and fashion are both about identity. They are both highly cyclical. There are lots of different aesthetics in both politics and fashion. And, more broadly, fashion and politics are both products of our culture. You can think about political movements like a fashion trend – lots of people suddenly adopting a new idea or concept.” 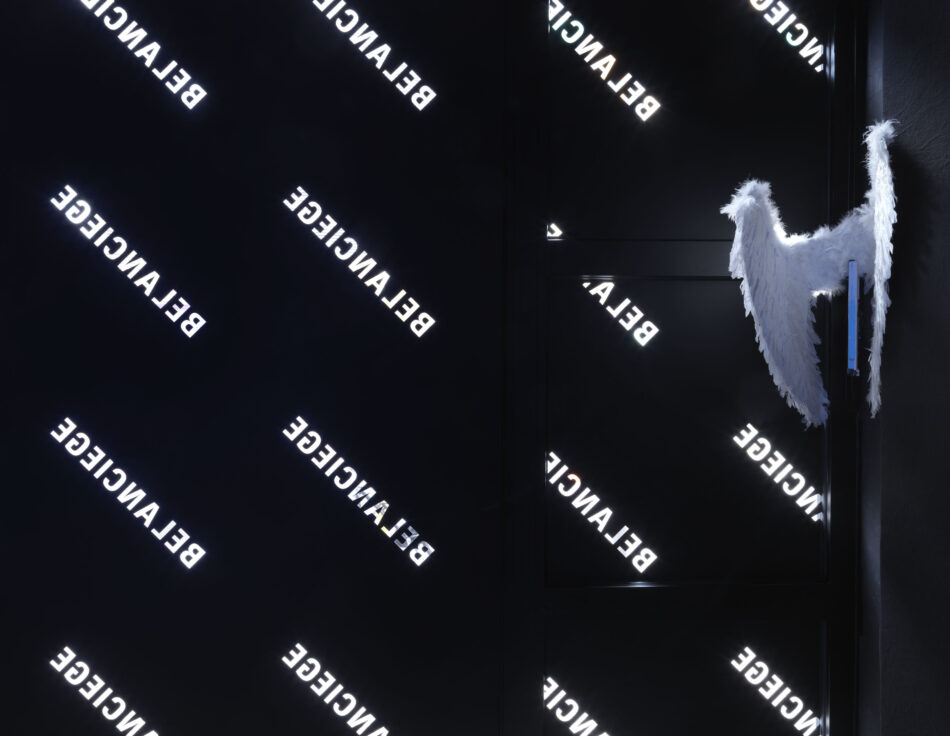 So, the logic is that by anticipating trends, by collecting this data, you can have a successful election. “Donald Trump is less of an ideology and more of an aesthetic. He’s the Uggs of the presidency, the Crocs,” says Willey. “A very ugly style and ideology that just happens to be on-trend.” And, in the fashion world, a hit collection. Steyerl explores some Balenciaga “case studies”, like the appropriation of the IKEA frakta bag and the Bernie Sanders/Balenciaga collection.

Visually, the three vertical screens are propped on a multi-level blue structure, a choice justified in the work. It is reminiscent of the European Parliament in Strasbourg, which was the inspiration for the SS20 Balenciaga show in Paris. As explained in ‘Mission Accomplished: Belanciege’ both are möbius strips, metaphorically: all have only one side and boundary, no outside or inside and a circular aspect. Steyerl also relates this to the perpetually misguided identities and autocratic regimes that create circular “traps” to keep population in place.

It is by no means surprising that Steyerl is among the most influential artists of our contemporary moment; her work reflects our time objectively, unscrupulously, concisely and creatively.