A puzzling sense of displacement grips you as you walk up the stairs to Galerie Nordenhake. What at first appears to be a strangely fragmented conversation between people turns out to be, as you approach the gallery’s door, syncopated monosyllabic sounds. Though sounding human, it is unclear whether they are artificially generated. Nevertheless, as you swing the door open, it sounds like stepping into a cardiac device monitor. The “uhs” and “ahs” mark out the heartbeat of ‘Transitions,’ Sirous Namazi’s new show at the gallery. 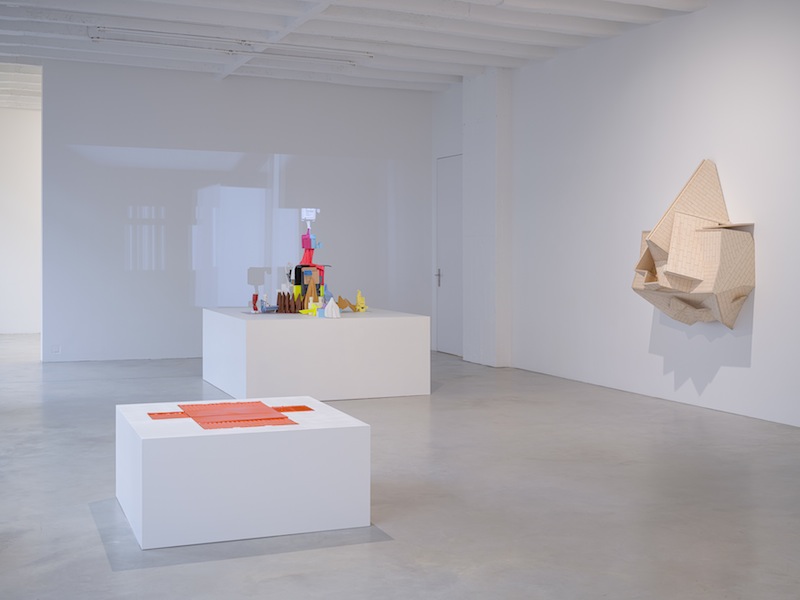 Namazi’s work reflects on consumerism, production and displacement: perhaps the consequence of a tumultuous beginning of life. The artist and his family fled Iran during the Iranian Revolution and found asylum in Sweden where the artist is now based. To say Namazi uses everyday objects is doing his installations and sculptures a disservice. He recreates them, most recently using 3D printers, often juxtaposing them with other elements, as in ‘Pavilion,’ an elaborate installation on show at the gallery. Namazi’s work is also marked by a schematic mathematical logic in creating plans and sculptures reminiscent of urbanism and architecture. His sculptures and installations exist on another plane, where spatial imagination is paramount and realism is not a prerequisite, leading to uncanny and beguiling constructions. 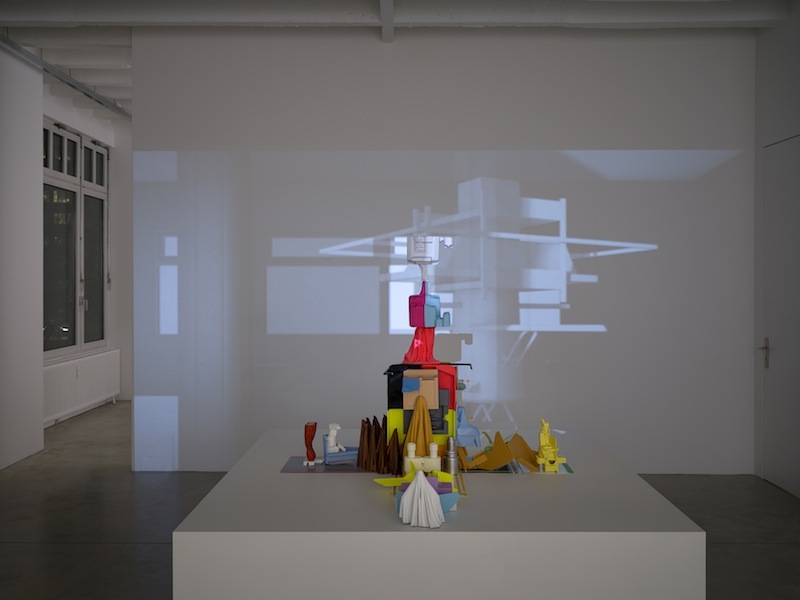 ‘Pavilion’ challenges the viewer to decipher the amassed group of quotidian objects—from iPhone cases to binoculars, textiles, lamps, cupboards. A bewildering exercise, which seems to be the intent of the installation from its inception, as objects meld into each other. In another level of disorientation, there is a video projected directly on the colourful 3D printed objects, which creates a shadow on the wall. Then, there are also the deafening and incomprehensible sounds.

These four elements—the sculpture, video, sound and shadow—operate in unison, though they also work individually. The sculpture seems to expose the glitzy, haphazard construction of consumer culture, with the childlike, colourful elements piled on top of each other. The video appears to add a layer of realism to the installation: the projection, though elusive, has more structure. The pulsating and rhythmic sound effects organize the space and the sculptural element, as if guiding your visual senses through beats. The hollowness and the absence the shadow generates is perhaps the most exciting aspect of the work. It is in its emptiness that a reading from the work emerges: the nothingness of consumer products. 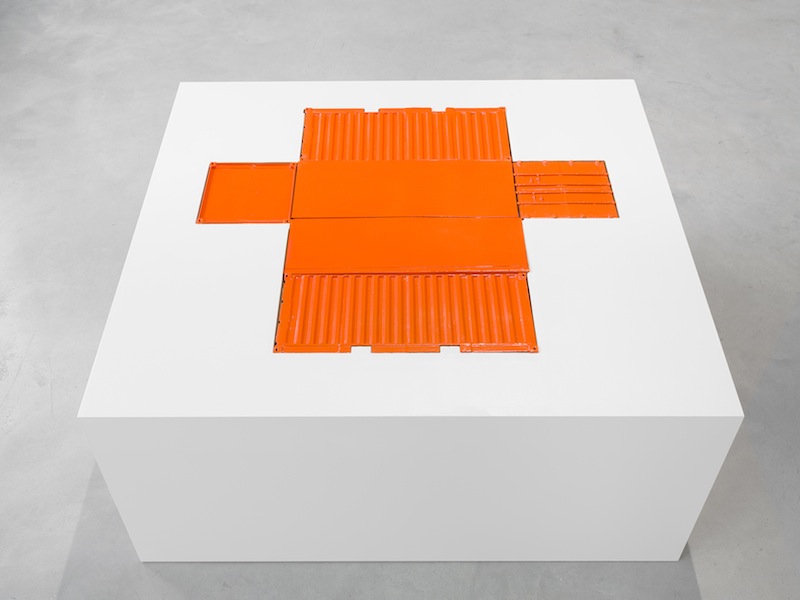 The simpleness of ‘Container’ is deceptive. At first glance it is the plan for a small scale-model of a freight container. Join its sides and you will have a neat compact model. But it doesn’t add up: the two ribbed sides should be parallel but in this model they are perpendicular. Like ‘Pavilion’, ‘Container’ destabilizes a familiar object, distorting a cargo container, an essential tool of trade, into a nonsensical object. Additionally, it is made out of PLA—one the cheapest and most discardable plastics—rendering it technically without value. Put these two together, and the work seems to become a comment on commonplace bad manufacturing, the “incorrect” model and ubiquitous PLA. 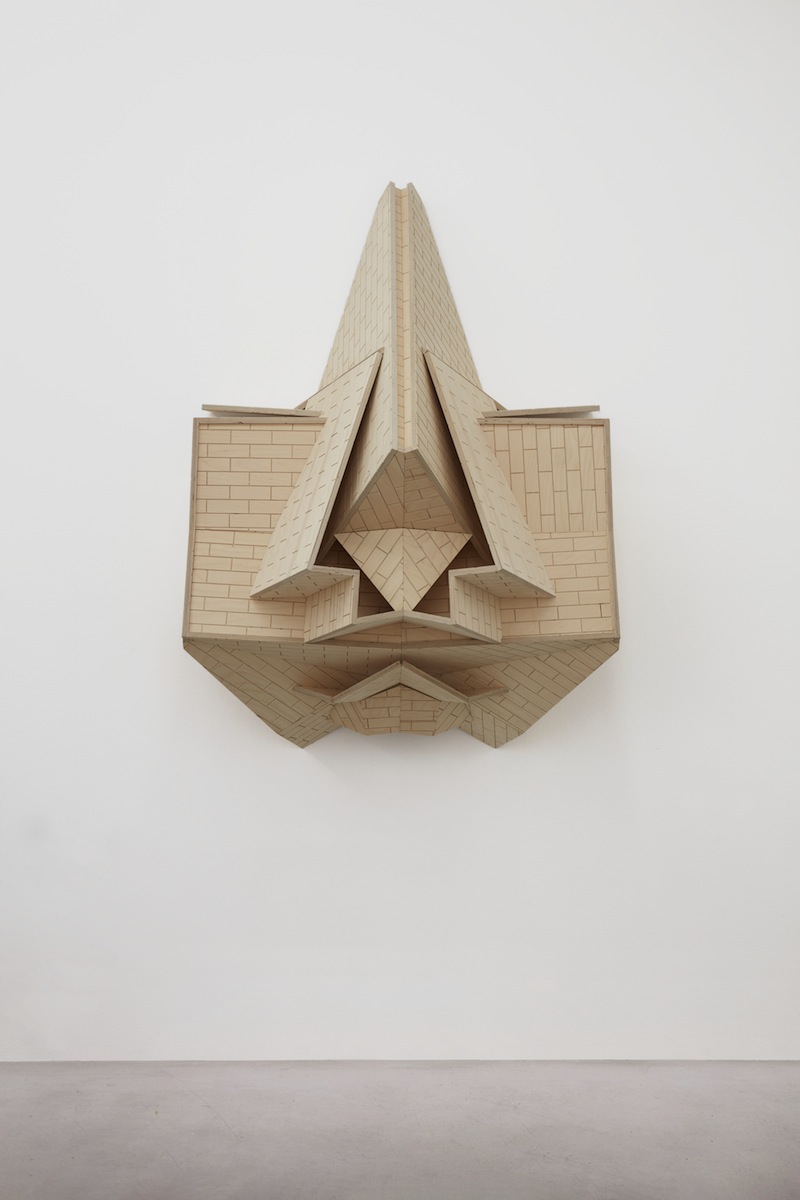 ‘Mirrored’ seems like the set for one of Calvino’s ‘Invisible Cities’. It is an uncanny sculpture, almost recognisable, yet beyond decipherability. Fundamentally, it’s a superimposition of different layers, images of rooms and buildings collected by the artist, which appear to have been reduced to a nucleus—an exegesis of matter. It is impenetrable, the recesses are irresistible, you will try to look inside, but they’re like dead-end streets. A solid abstract fortress that entices you to explore the essence of substance.

Namazi’s work is playful and ironic. Without ever being openly plain or overly complicated, there is a cohesion in everything he constructs. Consumerism is unmasked, structure is re-structured and construction becomes uncanny.