Thinking about the word loop, both positive and negative images come to mind. Loops are the circle of life and breath, the reassuring confirmation that existence continues. But a loop is also a block, stagnation in an always equal condition, the impossibility of change. Loop is a category that adheres to the human scale and the universe: it regulates time and space. Considering the most recent quantum physics theories, in fact, we should now abandon a linear visualization of time in favor of a malleable and cyclical one. The exhibition ‘AGAINandAGAINandAGAINand’ gives access to the manifold visual and semantic expressions of the loop through a distilled selection of works by internationally renowned artists Ed Atkins, Luca Francesconi, Apostolos Georgiou, Ragnar Kjartansson, Susan Philipsz, Cally Spooner and Apichatpong Weerasethakul. They represent a choir of voices showing the cogent quality of this topic within artistic discourse. 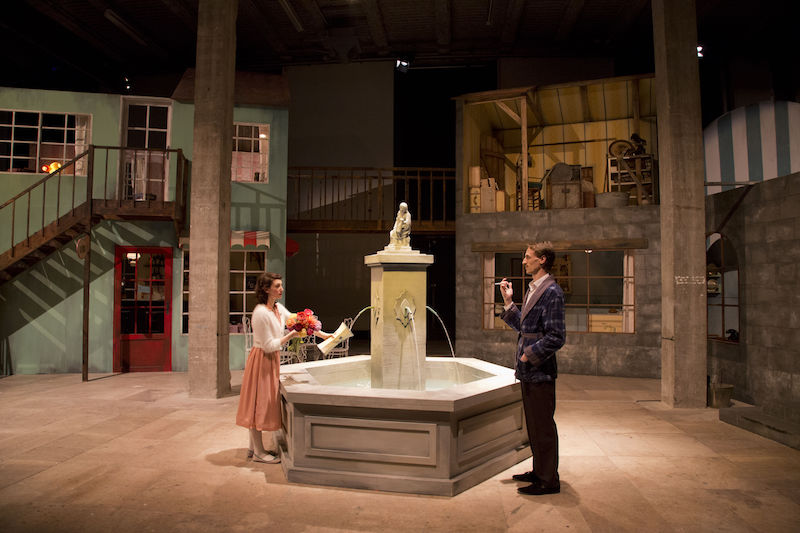 The beating heart of the exhibition, marking the rhythm like a metronome, is ‘Bonjour’ by Ragnar Kjartansson, which first premiered at Palais de Tokyo in 2015. Like other works by the Icelandic artist, ‘Bonjour’ escapes all labels: theater piece, performance, installation. In the main hall we see a scenography—a French village from the 1950s—purposely hyper-detailed, as if to anticipate an equally detailed narration. We are allowed to see inside two houses, filled with furniture from the period, and a small square with a fountain. A man and a woman move lazily around them, making somnolent gestures, like strumming the piano or arranging flowers. At a certain point, simultaneously, they leave their houses. At the fountain their eyes meet and they finally greet each other: “Bonjour”. They return to their houses and the cycle begins again. “I like the idea of taking theater and putting it in the context of art,” observed Kjartansson. “It becomes something completely different.” In this case, the rehearsals are the element dragged and turned into art. Yet ‘Bonjour’ is something in the middle: it is not clear if it is a rehearsal or a scene representing a routine. It probably represents both and, in doing so, it anticipates the varied meanings of loop that we will see in the other works.

‘Bonjour’ exposes repetition as the practice of improvement (rehearsals) as well as the reassuring but also alienating ménage of a daily routine. It also displays the cyclical nature of time by staging aesthetic symbols (the scenography looks familiar, as vintage furniture is all the rage now). This magnetic impasse prompts opposite reactions: we feel disoriented but also intimately and eerily safe. The loop is a sweet, safe place. This is certainly the most powerful work, the backbone supporting the entire exhibition with its scenographic and layered significances, ultimately playing with the theme of the narrative cliché, which is essentially a form of loop.

Similarly, Apostolos Georgiu’s big paintings (all ‘Untitled,’ 2016 – 2019) look like scenes from movies or lives already seen: indefinite characters perform actions of timeless work and domestic routines. A man in his work suit plays with children, his working day finally finished—it will be the same tomorrow. These paintings show nothing particularly disquieting nor reassuring. 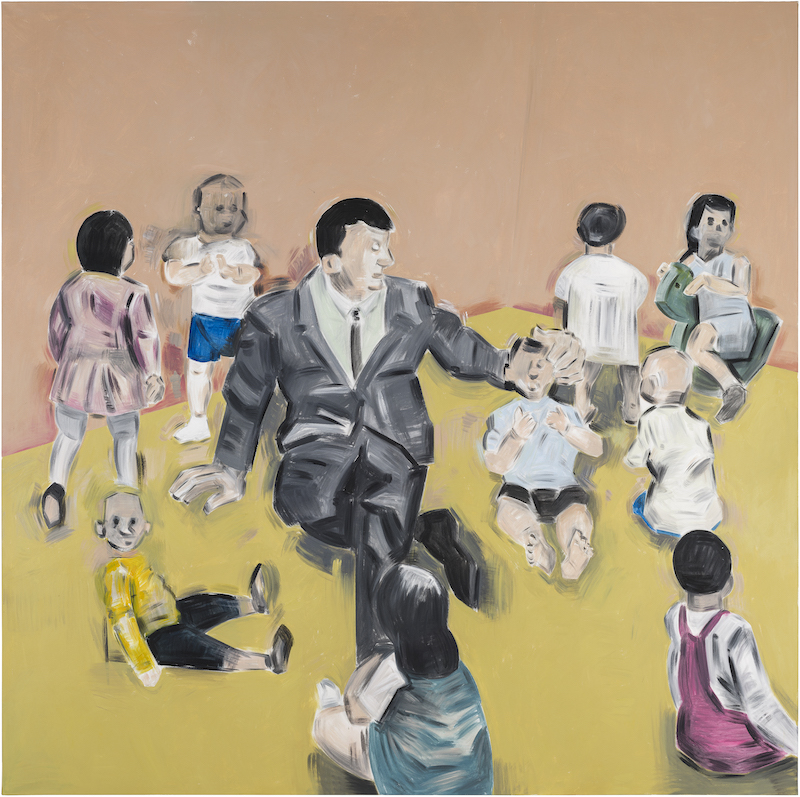 Apichatpong Weerasethakul is one of the best known Thai artists, and in his videos he often portrays his home country. Reincarnation is the core of many cultures, including his own, and in ‘A letter to uncle Boonme’ (2009) it becomes the means by which the author delivers a picture of his region. The work is inspired by a book about Boonme, a man who used to tell his past lives. The film technique and the storytelling, developed in a circular scheme, foregoes documentary realism to offer an cyclical portrait instead. At the same time, the video is contextualized in a clear representation of Thailand’s society and nature: you can see interiors of houses, men at work, the jungle.

Cally Spooner treats the loop almost like a sculptural material. The video ‘DRAG DRAG SOLO’ (2016) is, first of all, a physical loop, as the big screen is placed diagonally and centrally in the room, allowing you to turn around it. In a sort of tautological game, the video repeats itself and also represents a repetition: the rehearsals of a performance. The idea of the loop as a refinement technique returns – the final enactment is missing. The performer’s gestures, convulsive movements imitating sporty poses – seem to syncronize with the visitors’ steps (the video has no sound).

From the last room you can hear the ‘Bolero,’ Ravel’s well-known orchestral composition containing only two hypnotically repeated themes on an obsessive rhythmic base. This music accompanies the dystopian installation by Ed Atkins, ‘Safe Conduct’ (2016), in which the attitude of estrangement—and at the same time apathetic enslavement—of his well-known digital avatar is addressed to the automated movements of security controls at the airport. A control of eerie precision: a post-apocalyptic checkpoint where guns, brains and pieces of face and limbs are scanned. 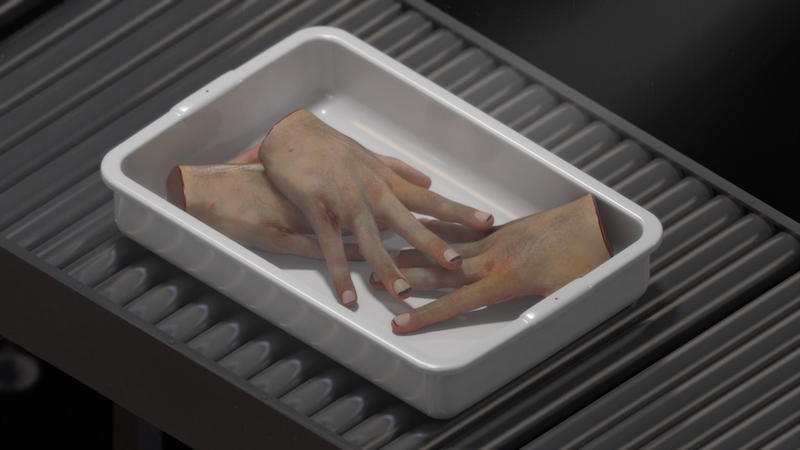 Only after leaving the last room do you notice, in a rather sacrificed position, Turner Prize winner Susan Philipzs’ sound installation ‘Guadalupe’ (2003/2019). A dome speaker is hanging in the entrance hall, creating a link with the environment acoustically depicted in the sound piece: a bus station. We hear confused voices and background music, then a simple tune comes in and somebody begins to whistle. The work epitomizes the collective, anonymous places of disorientation and mechanical gestures, making an attempt to establish a moment of introspection, a rupture in the loop.

To exhaust the entire concept of the loop in an exhibition is a mammoth task, making the direction chosen by the curator more appreciable: excavating those crucial points capable of accompanying the visitor towards both universal and personal reflections. Ultimately, the diversity of media allows us to take in the contents in a way that is anything but didactic.