The strong discursive bent in Oscar Muñoz’s work arises from the fact that he treats material as metaphor, as a means to meditate on the passage of time. He does this by separating the content from its form by literally destabilizing the indexical quality of the image. This is most obviously the case when his work is a video—such as when he documents the process of silkscreening portraits onto water—but it is also present in the still image, which gives the impression of trace evidence in the process of deterioration. The effect is melancholic, sometimes nostalgic if not mournful, and certainly cinematic. Rather than carve out a stubborn materiality that evades or confounds words, he creates a misty ambience conducive to rhetorical meandering. He coaxes words into existence even as he erases them, as he does in ‘Distopia’ (2014). For me, this makes Muñoz very much a curator’s artist. 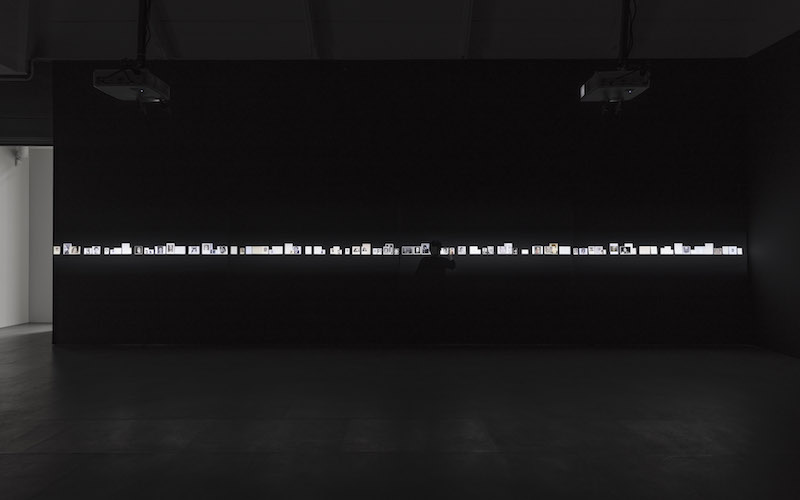 ‘El Coleccionista’ (The Collector) is Muñoz’s first show in Germany and also his first with carlier | gebauer. The exhibition’s most dominant work is the eponymous four-channel video from 2014/2016, presented in the gallery’s main space. The room is disorienting in its darkness, with the walls painted black. All that can be seen is a row of spotlit postcards propped on a long, narrow shelf. Someone is standing in front of the shelf. He rearranges the images. This is an inviting proposition and I consider joining in. As I step closer I realize that this someone is a video projection, and so is the shelf, and so are the pictures. I am alone in the room.

I am witnessing a process of curation. The ghostly “collector” moves, removes and turns around photographs, snapshots and illustrations, thus prompting a search for connections. The images are always of faces, but sometimes they are reproductions of paintings or sketches. A woman’s face from a how-to drawing manual is placed just five cards away from a close-up of James Dean. Later, Dorothy Lange’s ‘Migrant Mother’ (1936) appears, as well as what looks like a blurry close-up of Condoleezza Rice, but I can’t be sure. While images hover between recognition and oblivion, they all exude the familiarity of collective memory, even if it is only through the vocabulary of their form—mugshot, photo ID, drawing tutorial. 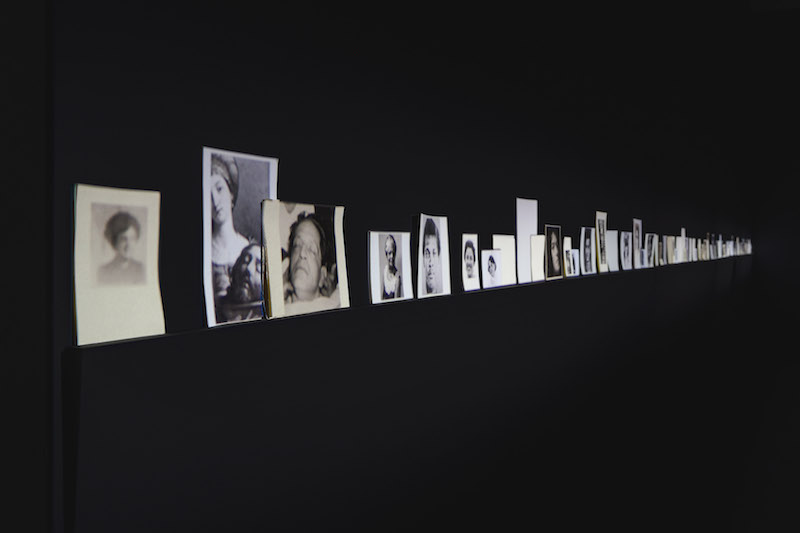 Though the projection of the collector is slightly transparent, his life-size presence is convincingly real, even uncanny. When I move to stand directly behind him, my shadow is cast over him, effectively erasing him. Yet, ironically, it is I who has disappeared, since the collector, oblivious to my presence, keeps moving to the right while I remain in the dark. It is then that I realize that the connection to be drawn is not between the faces on the shelf, but between mine and those looking back at me. I step back into the embrace of the enveloping blackness, removing the menace of my shadow and letting the world of the video follow its course. I am now the ghost, not the man at the shelf. I almost expect to find my own face among the pictures the he is patiently arranging.

The reappearance and disappearance of the face is what catalyses imagining and narrative formation. In ‘On Photography’ Susan Sontag wrote that “photographs really are experience captured,” but in Muñoz’s work, experiences are not captured; they are expressed as affect in the face of the individual herself or in the intimacy of her re-presentation. This is what Gilles Deleuze called the affection-image that is produced by the cinematic close-up: the expression breaks free of its object, becomes autonomous and capable of unleashing new meanings and perhaps even new events. 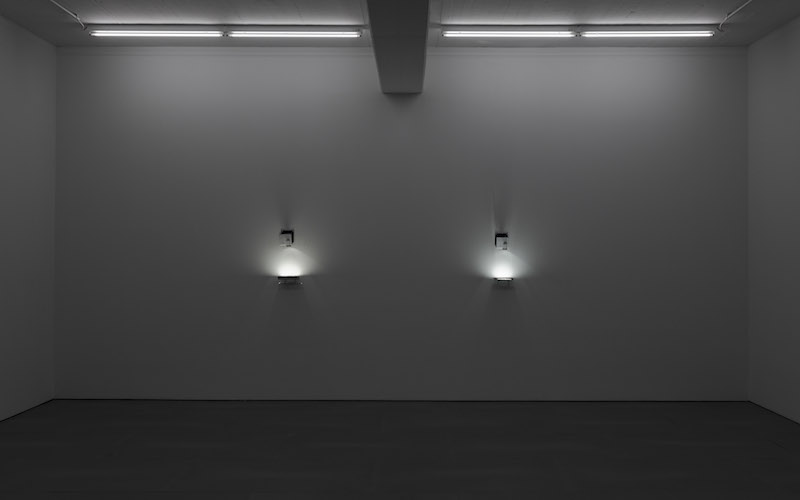 This is what literally happens when Muñoz dislodges an image from its surface. In ‘Seis Intentos’ (2002), Muñoz uses carbon powder to silkscreen anonymous portraits from newspaper obituaries onto water. They immediately deform and flush down the drain. In the video ‘Intentos 1 y 2’ (2004) the artist paints portraits with water on hot pavement. They start to disappear before they even take shape. Though devoid of human faces, ‘Distopia’ also creates an affection-image. The artist dips unfixed pages from the novel ‘1984’ into a basin of water, thus lifting the letters off the page to let them abstract on the surface of the water. It is thus not meaning that hangs like cloud in the exhibition, but the misty ambience of potential—a meditation, a melancholy, a loss but also an anticipation.

Affect is invariably malleable. It releases an emotional field upon which speculations, historical connections and personal associations can be made. It allows one to insert their own story of loss and forgetting. Though the work can be politicized in light of Colombia’s history of political violence, Muñoz admits in an interview for the San Francisco Museum of Modern Art that he is not interested in offering a personal commentary on current and historical events. It is enough that he a product of them. He has lost friends and colleagues to violence inflicted by the government and drug cartels, which naturally feeds into the elegiac quality of his work. It is perhaps this personal experience that makes it difficult to be didactic. Instead, his interest is in his daily perception and its relationship to forgetting. This prompts near endless speculation on how memories are inscribed, why they are erased and how a future might be built on their incomplete fragments—a curatorial endeavor if there ever was one. 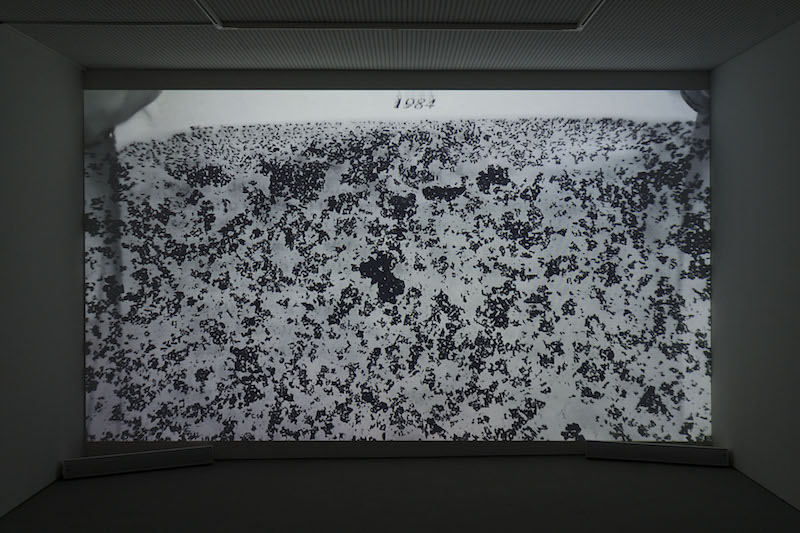