Sweeping barren landscapes, fields of frozen grassland, billowing dust clouds and the jarring cohabitation of disparate species cumulatively stand out against the concrete, bunker-like space of Times Art Center in Berlin. In Zhou Tao’s solo exhibition ‘Winter North Summer South,’ a multitude of realities are presented in such a manner that it’s often difficult to discern fact from fiction, creating an overwhelming sense of unease. Documenting a two-year period spent between a desert oasis and a Gobi village, a feature-length experimental documentary film and a series of accompanying photographs contribute to the overall impression that something is amiss in this human/nature balance. Through the depiction of landscapes marred by human interference, Zhou presents us with a form of future archeology, one where we are left to make sense of such surreal scenes it is often easy to forget that we are looking at a documentary. 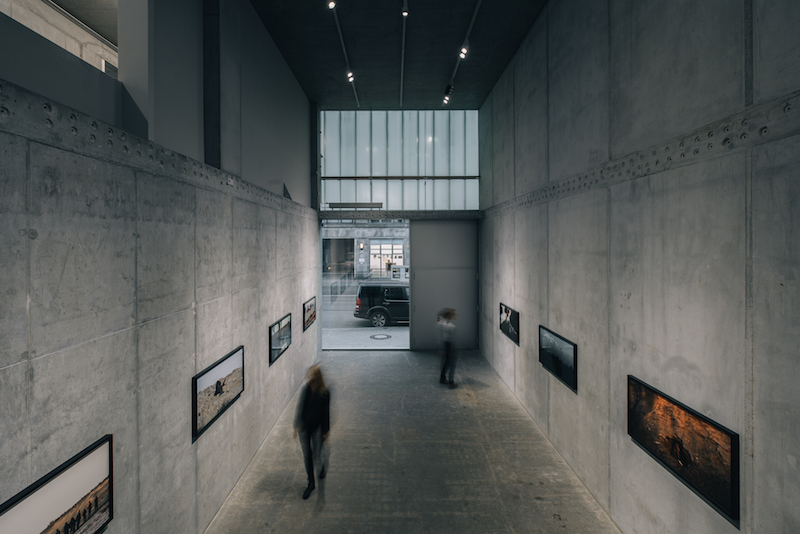 Curated by the Guangdong Times Museum’s Nikita Yingqian Cai, this exhibition builds up a topography of place through a cumulation of images in order to evoke the inexpressible idiosyncrasies of the semi-arid North-Western region of China. A series of photographs welcome us into the space, although we are given little context as to their production, origin and, for some, even the actual subject matter. One, for example, shows a sparse landscape, tree trunk in foreground, and something that is initially unidentifiable: a mess of fur, skin-like and glistening (something surely creaturely anyway). Despite repulsion we stare, trying to ascertain what it is we are looking at. The titles give nothing away, each image is simply captioned: ‘Winter North Summer South’ along with a number. It’s difficult to derive logic to their display, they are ordered neither by location nor chronology. However, this isn’t a critique. Rather, it’s half of the beauty in the way in which Zhou approaches image-making. 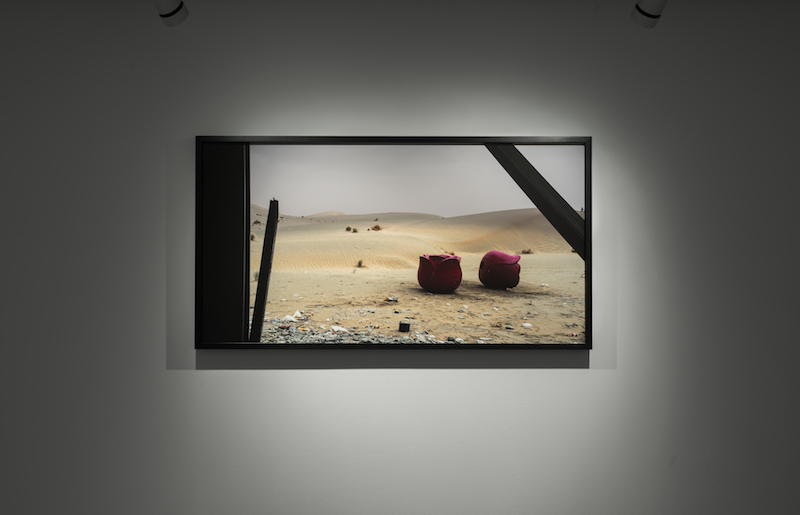 There is a notion in Chinese poetry known as yijue or tonggan, which can literally be described as the fluidity of sensations, otherwise known as synesthesia. This is how Zhou brings us into his world: by flooding us with images without dictating their context or significance. This approach should be disorienting, but it is through this accumulation of encountered moments that we derive a narrative. Mammoth metallic roses lay abandoned atop sand dunes. These strange artefacts suggest some kind of apocalyptic event, perhaps capitalism has finally collapsed and all that is left are the strange remnants of a time where we tried to manufacture nature. But we know that this isn’t the future, this is a very real present. In this way, it’s difficult to pinpoint where these images are situated in time. They appear like an archeological document but at the same time could be relics of a dystopian future, to be found by some distant civilisation. It’s as though they are suspended in time.

It’s not until we venture further down into the depths of the gallery to watch the feature-length film that we gain some context to these photographs. ‘North of the Mountain’ is situated somewhere between experimental documentary and slow-cinema, following Zhou’s method of steeping the audience in imagery to evoke the sense of a place. Here, we see Zhou’s photographs animated, albeit at a snail’s pace. The same dry grass plains are slowly panned across, and we finally see the view over those rose-laden sand dunes. We watch in real-time as a man meticulously skins and butchers a goat, and realise that the entrails are the subject of that previously unidentifiable image. 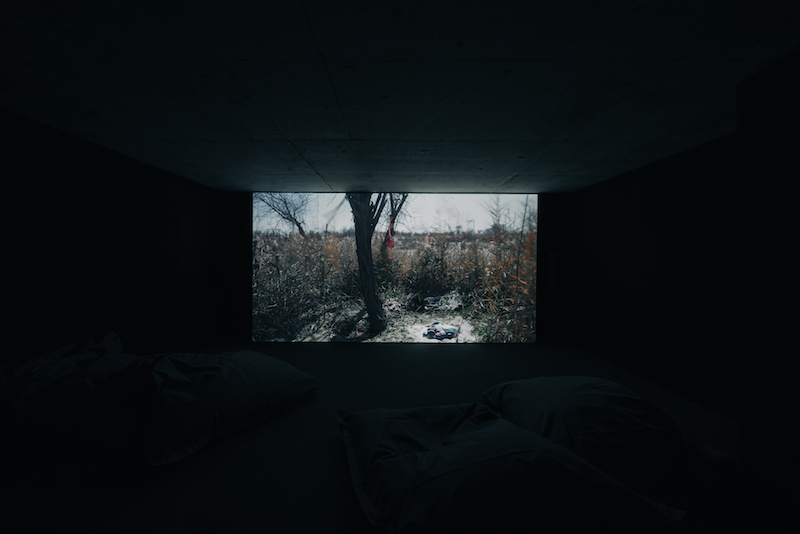 I had been warned by the attendant that the film contains scenes of violence, of animals being killed, and I had wondered if I would make it through the whole seventy-six minutes. These moments of brutality, although initially shocking, are somehow softened by the creeping pace of the film. Often the violent spectacle is obscured from view in such a way that we can only guess at what is actually going on and become desensitised to the harsh reality of our relation to subordinate species. There are dog fighting scenes where the camera lingers so long on the furry entanglement that you become hypnotised, as it shifts back and forth between serene imagery of the surrounding wildlife and the provoked dogs snarling their teeth and drawing blood. It’s only once it inevitably crescendos to the fight’s end that the original wave of disgust returns, and we’re grateful when we’re redirected to a more palatable landscape scene. This whole process is emblematic of Zhou’s work and, though at times difficult to watch, proves his method of a slow but persistent immersion. We gain a comprehensive sense of this place through the accumulation of carefully considered images.

The Chinese Southern School of painting, or literati painting tradition, is most probably what comes to mind when thinking about traditional Chinese art. A black willow tree sprawling vertically down a white rice paper scroll. Here, the artists are as interested in what is omitted from the canvas, creating a sense of space by pushing the landscape to one side of the image and using as few brush strokes as possible. In this tradition, painting became no longer concerned with only depicting the physical world, but rather its purpose was to convey the inner landscape of the artist’s psyche. Adopting similar tendencies, Zhou approaches film- (and image-) making by seeing it as a way of engaging our reality through technology, using the camera as an extension of the corporeal. Just as he assumes a contemporary approach to the depiction of landscape, he also reforms the literati tradition to suit our current crisis.

Zhou sees the camera as the connecting point of perception, presenting an assemblage of images that not only appear uncanny and surreal but, when brought together, culminate in a sense of unease. In this way, he is interested in how we depict the landscape in this age of unprecedented ecological destruction, one where we can no longer see ourselves as separate from the natural world. 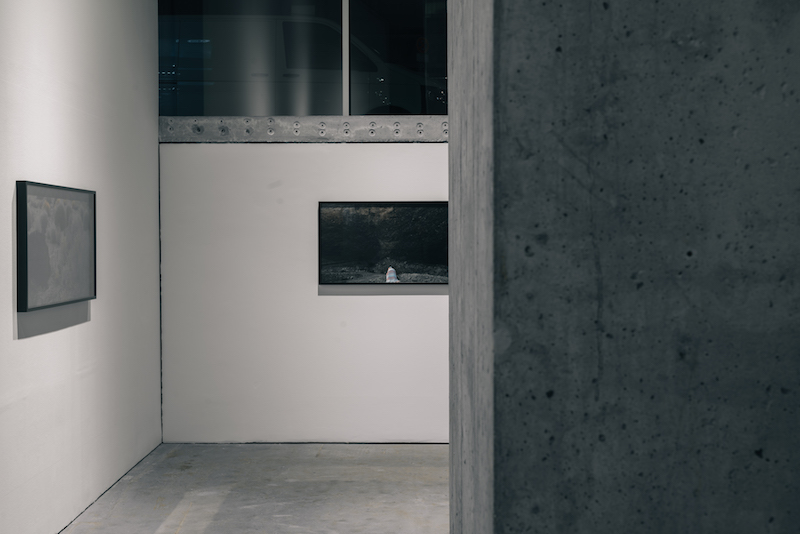